In an age of authoritarianism, the world sees glimmers of hope

Globally, threats to democracy are acting in full force. But pushback against autocracy is also gaining strength and momentum. Here's a look at some of those movements.

MARCH 19, 2019 - In the past year, citizens of Hungary, Poland, the Czech Republic, and Ethiopia have taken to the streets to demand accountability from their governments, while voters in Malaysia and the Maldives ousted corrupt governments at the ballot box. Countries with a strong civil society or decent-sized middle class continue to push back against autocrats, even though the headlines are more often about the threats to democracy. 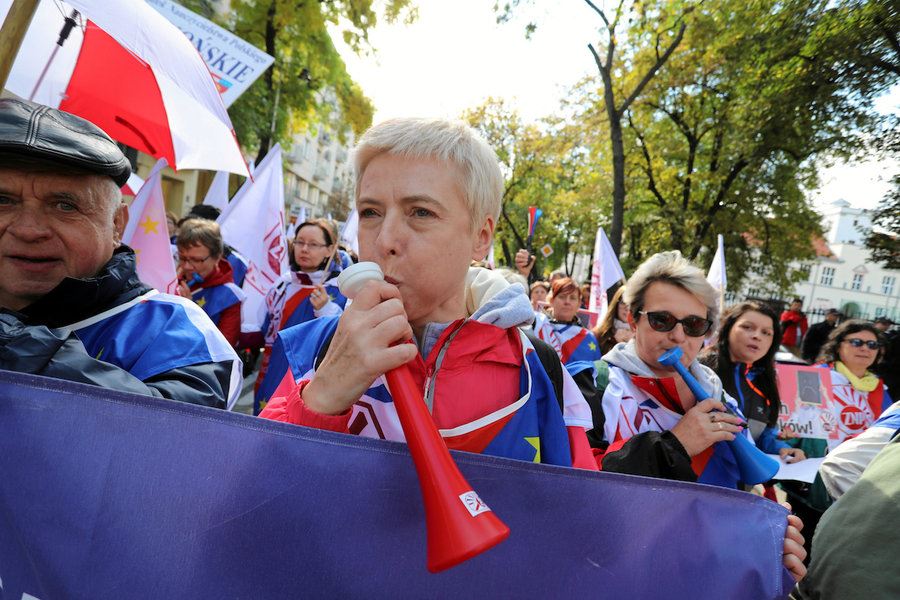 Supporters of higher wage for public-sector trade unions take part in an anti-government demonstration in Warsaw, Poland, on Sept. 22, 2018. The country saw a wave of protests relating to issues, including suspect judicial reforms.Agencja Gazeta/Slawomir Kaminski via ReutersThat’s not to say democracy has nothing to worry about. A new paper published this month found that the world has been in “a wave of autocratization” since 1994, and as many as 75 democracies have seen a reversal to autocracy. Modern-day autocrats know better than to blatantly shore up power, but do so gradually and under a legal facade, making it harder to detect, researchers say. Autocrats pit authoritarianism against democracy, promoting it as a more efficient form of governance and spreading the technology that strengthens control. Social media amplifies the spread of misinformation, clouding voters’ judgment.

Global freedom, which is composed of political rights and civil liberties, has been in decline for the 13th year in a row, according to a new report from Freedom House. But the same report also notes significant improvement in accountability for corruption in Angola, Armenia, and other nations. Political participation in most parts of the world has seen a continuous upward trend, reports The Economist. And while autocrats threaten democracies, they are also “fueling a powerful counterattack,” Human Rights Watch notes in its latest annual report.

“Those who are bemoaning this authoritarian turn in the world were overstating the case,” says Steven Levitsky, a political scientist at Harvard and co-author of “How Democracies Die.” The euphoric expansion of democracy in the 1990s led to the over-optimistic belief that authoritarianism was a thing of the past, and now that expectation has been dashed, he says. But “there’s yet to emerge a real, viable, truly legitimate alternative to democracy in the world.”

That doesn’t discount the fact that people are disillusioned with traditional political parties and losing confidence in democracy. But rather than disengaging from it, that dissatisfaction is driving citizens to participate in political processes, according to The Economist. Voter turnout and membership of political parties rose, reversing a downward trend. A larger proportion of the world’s population is now willing to engage in lawful demonstrations. The Economist also notes a particularly striking area of progress coming from female participation in politics.

“Women have become much more active, not just in [the] U.S. but around the world,” says Steven Leslie, lead analyst at The Economist Intelligence Unit. “There is an ongoing surge of female participation in politics and in activities that are essential to democracy.” Barriers like discriminatory laws and socioeconomic obstacles are gradually being removed. In Rwanda and Ethiopia, half of the cabinet ministers are women. New legislation in Japan encourages gender parity in parliament. In the United States, the voters in the November midterms elected the highest number of women to Congress in history – though they still make up only 23.7 percent.

SOURCE: Freedom HouseJacob Turcotte/StaffStill, the international atmosphere has become less favorable to the expansion of democracy. Not only is the totalitarian state of China spreading its influence, but cracks are appearing in decades-old alliances such as the European Union and NATO. In the EU, both Italy and Turkey saw their rankings in The Economist’s democracy index fall by at least 10 places. Meanwhile, on the other side of the Atlantic, the U.S. is becoming more isolationist, analysts say.

“America’s commitment to the global progress of democracy in its foreign policy has been seriously compromised,” says Sarah Repucci, senior director for research and analysis at Freedom House.

In one example, when the U.S. withdrew from the council on human rights at the United Nations, it left “a huge vacuum of power,” says Rosa Freedman, a professor of law, conflict, and global development at the University of Reading in England and author of several books on the U.N.

Despite the downward trends, however, countries are forming new alliances to put pressure on repressive regimes, reports Human Rights Watch. It points to the example of the EU and a group of Muslim-majority countries working together to create a mechanism at the U.N. to collect evidence on the ethnic cleansing of Rohingyas, which could be used in future trials of the Myanmar government. A group of Latin American countries led a resolution in the Human Rights Council to condemn the severe persecution of Venezuelans under President Nicolás Maduro.

Other human rights mechanisms have sprung up in unexpected places, adds Joseph Saunders, deputy program director at Human Rights Watch. For example, the organizing bodies of big sports tournaments, such as the World Cup and the Olympics, will scrutinize the bidders and hosts’ human rights records.

“These are obviously dark times,” says Mr. Saunders. “But [you] miss a large part of the picture if you don’t see the pushback that is also happening.”