In one of Mexico’s most dangerous places for women, his students push back

It doesn’t have to be this way. That’s the simple but powerful message one teacher is helping his students communicate in Ecatepec, where high rates of gender-based violence have become the norm.

NOVEMBER 18, 2019 - ECATEPEC, MEXICO - The skirt stands in the middle of a rock-strewn patch in the schoolyard. As the gray plaster that the students have coated over it dries in the midday sun, their teacher, Manuel Amador, asks them to imagine wearing it, and breaking free. 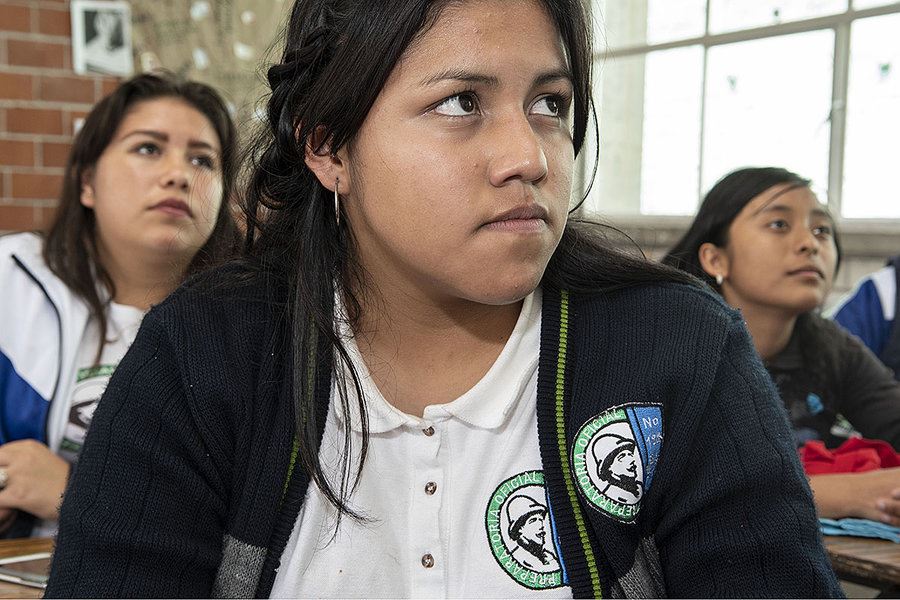 Students in teacher Manuel Amador’s after-school workshop in Ecatepec, Mexico, discuss one of their upcoming pieces of performance art, which push back against widespread gender-based violence in their community.Alfredo Sosa/StaffI

t’s part of the newest protest against gender violence that he’s helping students create at this public high school in Ecatepec, about an hour north of Mexico City and one of the country’s most dangerous places to be a woman.

One by one, the handful of teens who have stayed after school for the workshop show movements they’ve chosen to incorporate into the performance piece. The idea is that they will each wear a dried skirt over a brightly colored dress. After they break free of the skirt, they will flail their arms or jerk their heads back to represent hope and emancipation from silence.

“The skirt of rock came from the idea of immobility that women feel,” says Mr. Amador. His goal, he says, is to counter the acceptance too many people feel about violence in their homes, and their relationships – or about the statistics on femicides, domestic violence, and disappearances that mount around them.

“The moment that they are performing in a public space or in the school, they are combating the normalization of violence here,” he says – and learning how to discuss it in their homes, or with their friends at school.

It’s been nearly 10 years since Mr. Amador, who was born in the poor, mountainous north of the state of Puebla, began working at this school in Ecatepec. After studying sociology in college and working in human rights for minorities, including for indigenous and LGBT communities in Mexico City, he says his radar went off as he listened to the talk in the hallways about violence – and how no one seemed to denounce it. He began his extracurricular workshop, which he calls “Women, Art, and Politics.”

Violence in the spotlight

While the highway that links Ecatepec to Mexico City is clogged during rush hour with precarious microbuses and minivans barreling down the roadway taking nannies or restaurant workers to jobs in the capital, Mr. Amador does the reverse commute in the darkness, in time for the first school bell. 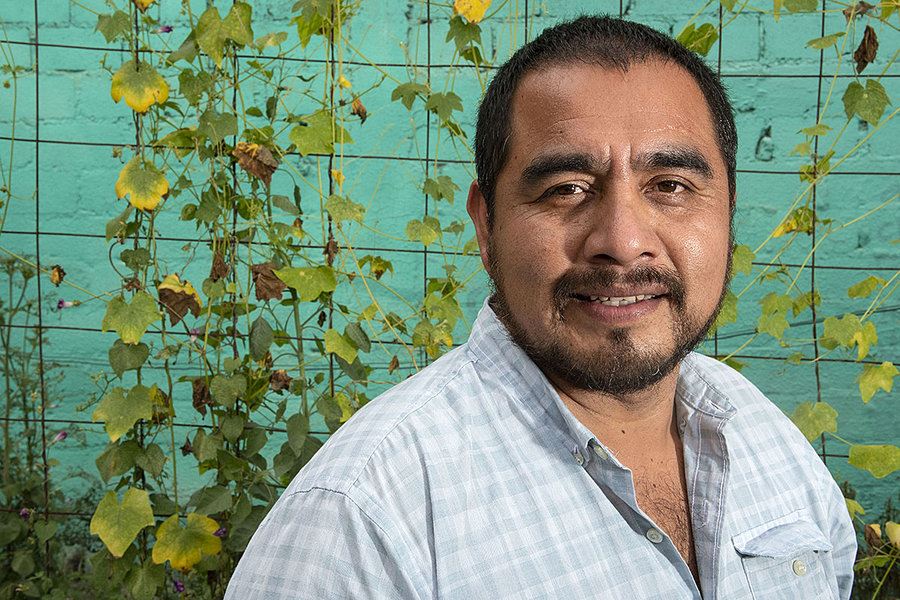 Manuel Amador began his extracurricular workshop to help students discuss, and challenge, the violence around them. “The moment that they are performing in a public space or in the school, they are combating the normalization of violence here,” he says.Alfredo Sosa/Staff

Ecatepec is a dense, labyrinthine neighborhood where residents grasp for a sense of safety. According to a recent government survey, 92.5% of residents here say they feel unsafe, among the highest rates of perceived insecurity in the country.

“Here I don’t think anybody is spared from being assaulted, at one time or another,” says school Principal Leticia Fragoso Martínez.

In fact as Mexico reckons with an uptick in femicide, or the murder of women for being women, the state where Ecatepec sits is one of the hot spots.

The National Citizen Observatory on Femicide documented 1,413 deaths of women between 2014 and 2017 in this state, of which just over 16% were investigated as femicides – though experts say the actual percentage likely is vastly higher. Ecatepec has been selected as one of five municipalities to receive funding and support from the United Nations’ Spotlight Initiative in Mexico to eliminate violence against women and girls.

The initiative, which is also funded by the European Union, launched in Mexico in the spring and revolves around six pillars, one of which is to combat the mindset that perpetuates gender violence – one of Mr. Amador’s key aims.

On a recent school day, the bell rings and students in dark-blue uniforms head raucously back home. But half a dozen stick around for the extracurricular workshop, including one boy.

Mr. Amador calls Brenda to the front to show the movement she has created, her arms circling out from her sides. “This represents the despair of never knowing when there will be a beating,” she explains, “and the liberation from silence.” (Only first names are used to protect students’ privacy.)

She is 15 years old. “Girls and children this young have to talk about something so heavy,” says Mr. Amador. But their giggles and interruptions, and their teacher’s sometimes vain attempts to refocus their attention, reveal their youth. 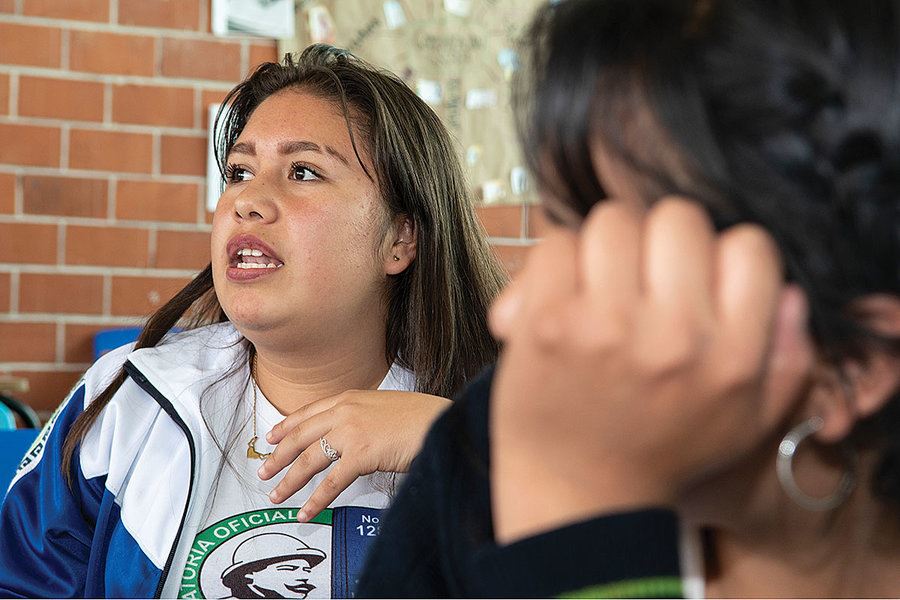 Students discuss choreography for their next performance in Ecatepec, one of Mexico's most violent places for women.Alfredo Sosa/Staff

Mr. Amador shows photos from a decade of work, which he estimates amounts to about 50 performances. His students have acted out beatings, hurled dolls and flowers to the ground, painted their faces black in bruises, or dressed in red to symbolize blood. They have worn garbage bags over their heads, and made dresses out of garbage.

They are not always appreciated. At one performance that took them to the streets around the school, Mr. Amador recalls a woman hissing, “Stop this nonsense. Go back to the classroom to study.”

With so many needs in the community, including high poverty and crime and many single and teenage parents, says Ms. Fragoso Martínez, the workshops are a form of counseling. “Maestro Manuel gives the girls the opportunity to be listened to,” she says.

On a recent day, the jeans-clad Mr. Amador is bantering easily with students, acting as a sounding board about life outside the classroom. Today, the class gets into a debate about feminists protesting in Mexico City who have vandalized iconic landmarks, and whether that’s a valid way to express rage. Mr. Amador gently challenges students to think more deeply. “You are only first-year students,” he jokes. “Wait until your third year. You will be warriors.”

“Here I feel good, because this is the first man, or at least the first man I know, who recognizes this problem and tries to solve it,” says a student named Jasmin. “He’s not like other men who say, ‘Here they go again with their sermons.’”

“Everyone says in Ecatepec, ‘Don’t enter there, because they kill women there,’” adds a student named Yolotzin. “We have to fight against the normalization of this, and learn how to express our despair and fear of suffering any kind of violence.”

Mr. Amador’s work has grown beyond these school walls. The coordinator for the Spotlight Initiative in Mexico speaks with him often. He has given workshops to university classes, while feminist groups – many of them made up of his former students – have adopted his style of performance art. On a recent Sunday, activist groups led a caravan through the streets of Ecatepec at the sites of murders of girls and women, dressed in purple and calling out the names of the victims. Mr. Amador was there with them.

Andrea Medina, a lawyer in Mexico City who works with victims of gender violence, says this work is particularly important here in the periphery of the capital, where gender norms are stricter. “To generate creative spaces in a place like Ecatepec that can be so destructive is important,” she says. “This is the potential that schools and university institutions have, and that so few are taking on. [Mr. Amador] managed to do it.” It’s why his students say they keep coming back, even if performances can feel insignificant against the problem they are tackling.

Mr. Amador is “reclaiming” space to reflect, Ms. Medina adds, “and saying, ‘This is not normal. I don’t want to live like this.’”