Indigenous peoples and the borderless beat 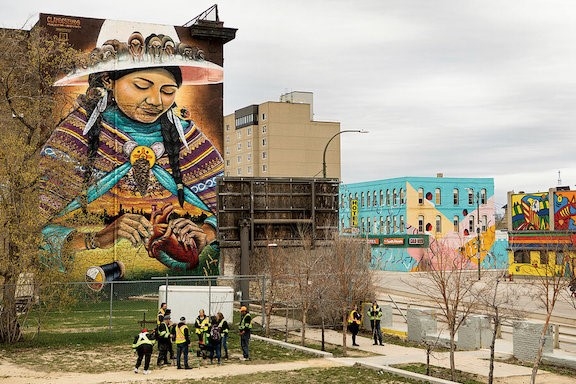 “There’s this whole community, a society that exists in both (the United States and Canada) and transcends the border in a lot of ways."

From popular culture to news media, Indigenous peoples are often painted with a broad brush that glosses over any sense of individuality and agency. Monitor reporters Sara Miller Llana and Henry Gass feel a responsibility to counter that perception with stories that highlight not just the plight, but the ideas, experiences, and hopes of Indigenous individuals and communities. This week, they carry that idea a step further, as they (along with reporters Moira Donovan, Jessica Mendoza, and Jingnan Peng) turn their pens over to six Indigenous people to tell their own stories.

It becomes clear that “from Alaska to Nova Scotia to Navajo Nation, so many issues are exactly the same,” Sara says.

In Winnipeg, Manitoba, where this issue’s cover story and People Making a Difference feature are both set, Sara found vibrant Indigenous communities focused on renewal and reclamation of their own futures. These themes echo those explored by Henry in his June 13 cover story from the Navajo Nation in the American Southwest. Indeed, though Sara and Henry are based 1,400 miles apart in Toronto and Texas, the two frequently collaborate on story ideas and see themselves as a team covering a borderless reporting beat.

“The idea that there’s this whole community, a society that exists in both countries and transcends the border in a lot of ways, is really interesting,” says Henry. “There aren’t very many things you can zoom out on like that.”

Indigenous society is inevitably influenced by the decisions of Canadian and American governments. But in many ways, Indigenous peoples have always lived outside these political structures, separated by philosophy but also by force. In both countries, Indigenous children were sent to residential schools designed to assimilate them while entire communities were relegated to remote reservations. And on both sides of the border, stereotypes of hapless victims have flourished. As a result of this history, many members of First Nations and Native American tribes do not see themselves as a part of either country.

“A lot of Indigenous people in Canada don’t even believe in the idea of Canada, so they certainly don’t believe in a border between the U.S. and Canada,” Sara says. “It’s not just that Indigenous peoples see themselves as not belonging to the U.S. or Canada. The issues are the same, but we silo them.”

Together, Henry and Sara aim “to draw attention to the interconnectedness of Native issues in both of these countries,” Henry says. It’s about “how they’re connected, but also how they’re different, how they’ve perhaps diverged, how they vary from one side to another and between different tribes and different First Nations,” he adds.