Cities are built for people, but should they be welcoming for wildlife too? Animals are making a home for themselves and adapting to urban life, raising questions about human-wildlife symbiosis.

AUGUST 30, 2019 - TORONTO - He was spotted in the most hipster of locales: a vinyl record store in downtown Toronto. 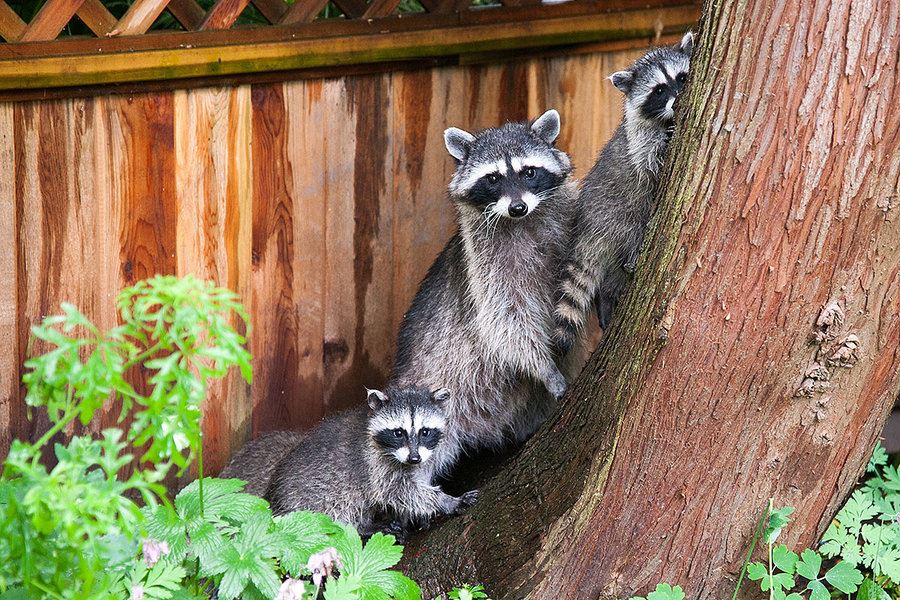 A mother with three baby raccoons peers out of a residential garden in Vancouver, British Columbia, in 2018. Raccoons are a common pest in the suburbs of Vancouver, too.Newscom/FileBut our friend bore none of the other markings of today’s urbanites like, say, a knitted cap in summer or an oat-milk latte in hand. In fact “he” (or “she”) was a black-masked raccoon, discovered next to a Willie Nelson sleeve in the storefront of Kops Records on Queen Street in June.

For an animal seeking its place in the urban landscape, it was just another day. But the presence of wildlife in cities has engendered questions and ambivalence about the distinctions between human spaces and the wild. And the blurring of those boundaries has left its mark on animals.

Although raccoon cousins in rural Ontario surely could never enjoy such an urban excursion, city-dwelling animals regularly interact with our built environment, like coyotes navigating train tracks or geese at street crossings. In some cases, animals seem to be evolving into new, more urban-adapted creatures altogether, like city spiders that scientists say are no longer fearful of light.

The rise of the urbanite raccoon is bringing questions about what it means to share space with wildlife to the fore. Some people love the animals, and want to feed or nurture them, while others just want them gone. And that hints at questions around how we see cities: Are they places just for humans, or human-built environments for all?

In Toronto, which likes to hail itself the world capital of the raccoon, the black-masked creatures know when to cross busy streets (at dawn) in the approximately 3 square blocks that they each generally navigate (unlike the 20 square miles their rural peers can roam) and how to knock over compost bins to get around raccoon-resistant locks that the city spent $31 million (Canadian; U.S.$23.3 million) installing, as a Toronto Star investigation last summer found.

“When they move into the city, they live kind of like we do,” says Suzanne MacDonald, a psychology professor at York University and long the authority here on raccoon behavior. “So, you know, high density, they get along where they wouldn’t in the country, they eat junk.”

In general, this has made the city creature much bigger, something I can confirm: my daughter has lovingly dubbed the raccoon that frequently waddles between our back porch and the tree behind our house “Chubs.”

Dr. MacDonald’s major finding is about urban raccoons’ tenacity. Where the rural ones are less likely to persist in a strategy that doesn’t work, the urban ones keep working until they have it figured out. Now she’s setting out to determine whether that’s innate or learned, by studying orphaned raccoons in each place. “I want to know if the city animals are actually becoming a different subspecies than the rural ones,” she says.

Raccoons aren’t learning the ways of the city alone. Coyote “incidents” have increased in the past decade, says Danny Moro, a senior project manager at the Toronto and Region Conservation Authority.

Coyotes are quite adaptable, he says. And urban environments provide a lot of their necessities: prey, or plentiful food scraps on garbage day, and sheds or industrial spaces to den. They’ve learned if they go back north, they face predators like wolves, Mr. Moro adds. “I guess the closest thing you could call a predator in an urban environment would be a vehicle.”

For some human urbanites, interactions with wildlife can raise questions of responsibility. Animals injured and orphaned by cars, for example, are a prime concern for some city residents. Others are more concerned for themselves or their pets and property.

Direct encounters can be unnerving. One morning this past winter, waking up feeling invincible, I went for a predawn run with friends in a heavy snowfall in Toronto’s High Park. The park is full of backcountry tracks, but given the conditions, we took to the main road.

Yet even there, a coyote neared our path, stopping us in our tracks. Two of us did exactly what you shouldn’t – we turned our backs and walked briskly away. But our running leader knew how to handle this. She raised her arms in the air to make herself bigger while making loud sounds. Except that didn’t work. The coyote didn’t budge. Then we noticed another nearby, unmoving. There was a moment of fright, and then a police officer pulled up, and told us all to get in the back of her car, bringing us to safety: the main artery of Lakeshore Boulevard. The coyotes had won.

Mr. Moro says he’s been getting a lot more calls about coyotes that are unfussed by loud humans. Some blame, he says, goes to people who put out food to feed them.

In the case of raccoons, surveys have long shown Toronto’s attitude toward them is love/hate, and sometimes it’s love/hate in the same person, changing throughout the course of a single day. Feelings about raccoons are particularly intense, says Dr. MacDonald, because humans mistakenly attribute intention to the animals. They might surmise that a raccoon is waiting for the human to leave before breaking into the house, or taunting a human by looking straight into their eyes.

Raccoons drive her crazy too, she says, but “they are just trying to make a living.”

As raccoons are getting smarter, sci fi-ish fears about their “takeover” have ballooned. But there is really no competition, Dr. MacDonald reassures. “It’s not going to be like ‘Planet of the Raccoons.’” In fact, “I always say, ‘look it’s the mark of a healthy city if we have wildlife living with us,’” she says. “That means our city is pretty darn good.”