by The CSM Editorial Board

By the thousands, young Iraqis have created a “ministate” in downtown Baghdad that resembles the government they want – one not based on dividing up power by faith.

NOVEMBER 20, 2019 - In recent weeks, the so-called ancient hatreds of Iraq – between people of different faiths – have largely gone missing in a 14-story abandoned building in downtown Baghdad. It is there in central Tahrir Square that tens of thousands of young Iraqis have not only organized nationwide protests against the government, but also created a model “ministate” for a new Iraq – and perhaps much of the Middle East. 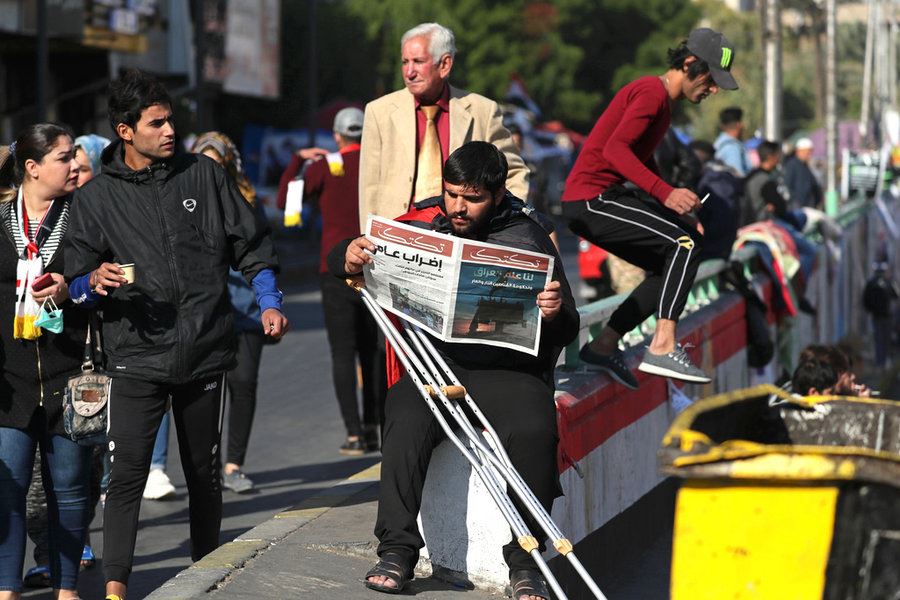 In Tahrir Square, Baghdad, a protester reads the “Tuk-Tuk” newspaper, published by Iraqi volunteers and the voice of the country’s largest grassroots protest movement.APAccording to journalist Pesha Magid, protest organizers in the building are working across faiths, a sharp contrast from Iraq’s sectarian power structure and its inherently corrupt system of patronage that has led to mass joblessness.

“Yazidis, Sunnis, Christians, we are all here to just be real Iraqis and support each other for freedom and for a good life,” said one organizer.

To counter the regime’s shutdown of the internet, protesters are publishing two newspapers. People of many different backgrounds are working together to offer food, legal advice, medical services, and even artworks, books, and music. Women and men share the tasks equally. Their most popular slogan: We want a homeland.

“This building will become a symbol for the world to see how the protesters operate, despite the violence and suppression they face,” another protester said.

Iraq watchers say the protests, which show unusual durability as well as a jubilant mood, are the largest grassroots movement in the country’s modern history.

More than 300 people have been killed since the protests began, mainly by militias backed by Iran. Inside Iraq’s government, elected officials are fumbling to offer concessions but falling short in meeting the protesters’ key demand: a change in governance away from the divvying up of power by ethnic or religious groups.

The young Iraqis use words like citizenship, social justice, and civil society to frame a different national identity than those in power or the clerics who command influence behind them. They are applying lessons learned from the failures of the 2011 Arab Spring. One big lesson: Show a new style of governance; don’t just demand one.

These protests are a cathartic moment for Iraq, one born of economic desperation but now demonstrating the virtues of true democracy in a 14-story building and beyond. The guns of Iran-backed militias may try to end this alternative system. But after seven weeks, the blaze of gunfire is still losing to Iraq’s trailblazers.