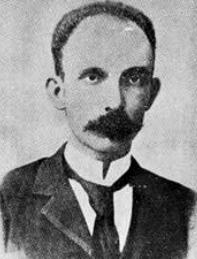 In a nation as divided as Cuba, only one man, José Martí, a poet and freedom hero, has been able to unite all factions. In his short life, Martí struggled against the dual oppressing forces of Spain and the U.S. to gain independence for his island nation while upholding his beliefs in liberty, freedom and greatness of the human spirit.

"Like stones rolling down hills, fair ideas reach their objectives despite all obstacles and barriers. It may be possible to speed or hinder them, but impossible to stop them."

Born in La Habana on January 28, 1853, Martí began his political career at the tender age of 15, when he helped start an anti-colonial newspaper. Within a year he was arrested by Spanish authorities for anti-government activity and sentenced to 6 years of hard labor in a quarry. In 1871, after serving three years, he was deported to Spain where he studied law in the University of Zaragoza.

"Liberty is the right of every man to be honest, to think and to speak without hypocrisy....A man who obeys a bad government is not an honest man."

After graduating from college, Martí moved to Mexico City, where he worked as a journalist. His objection to the military regime controlling Mexico led to his escape to Guatemala. However, his opposition to government abuses there again forced him to leave. In 1878 he returned to Cuba under a general amnesty, but he was soon banished back to Spain for conspiring against colonialist authorities. From Spain he fled exile and came to the United States. After a year in New York he left for Venezuela to work as a literature professor, but yet another dictatorship forced him out.

In 1881 Martí returned to New York where he lived until his final trip to Cuba in 1895. For the next fifteen years he tirelessly campaigned for the liberation of Cuba. In 1892 he went to Key West -- the heart of the fragmented Cuban exile community -- to form the Cuban Revolutionary Party, the movement that would lead to the eventual defeat of the Spanish army in 1898 and subsequent establishment of a free Cuba in 1902.

"One just principle from the depths of a cave is more powerful than an army."

In 1895, in a true act of heroism, Martí left the shores of the U.S. to join the war for Cuban independence, which he had so painstakingly organized from exile. He landed in Cuba on April 11 with a party of supporters and took to the mountains to join the ranks of the Revolutionary Army. By all accounts, Martí, a rail-thin, 42-year-old intellectual with no military background, found the life of the guerilla fighter unbearable. On May 19, a little more than a month from his arrival in Cuba, Martí rode into battle in one of the first skirmishes of the armed revolt and, to everyone's horror, was shot dead almost immediately.

"Men of action, above all those whose actions are guided by love, live forever. Other famous men, those of much talk and few deeds, soon evaporate." 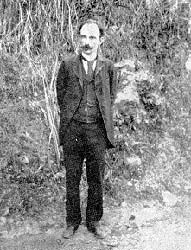 A fervent believer in Cuban independence, Martí was against the often-proposed annexation of Cuba to the U.S. Martí's own beliefs reflected the dysfunctional love-hate relationship between Cuba and its "monstrous" northern neighbor. As a thinker, he was enamoured with the American love of freedom and its image as the land of opportunity. But the reality of Washington's own imperial designs on Cuba made him think of the United States as the "turbulent and brutal North." In an unfinished letter to a friend found after his death, he spoke of risking his life to stop the U.S. taking control of Cuba.

"I have lived inside the monster and know its entrails."

Though Cuba's greatest freedom hero, Martí was also one of the great turn-of-the-century intellectuals of Latin America. The scope of his written work is staggering: he was an accomplished poet, a revolutionary philosopher, a professor, a publisher, a journalist and a political theorist. The heart of his writings always embraced the concepts of freedom, liberty and democracy. His vast experience and education enabled him to move comfortably in the most diverse fields, which is what makes his writing so rich and timeless.

"Just as he who gives his life to serve a great idea is admirable, he who avails himself of a great idea to serve his personal hopes of glory and power is abominable, even if he too risks his life. To give one's life is a right only when one gives it unselfishly."

More than one hundred years after his death, with the Cuban people separated by two countries and two ideologies, both the communist and exile communities have called upon Martí as a symbol for their divergent causes. Fidel Castro has called him a revolutionary hero and has emphasized that his writings state that Cuba will never be truly free without economic, racial and gender equality. While Havana's airport is called the José Martí International Airport and the Plaza de la Revolución is anchored by a giant obelisk in the middle called the Martí Monument, in Miami, the right-wing exile community and the U.S. government have created a TV and radio station to broadcast anti-Castro propaganda to Cuba called TV and Radio Martí.

What will never change, regardless of what the future holds for Cuba, is Marti's relevance and importance. Everywhere in Cuba and in the Cuban exile communities in the U.S., there are statues and tributes honoring his life, work, and untimely death. He will always be ingrained in the hearts, minds and souls of the Cuban people as their greatest hero. 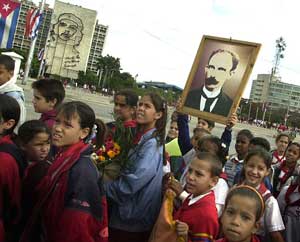 A young Cuban holds a picture of Cuban National Hero Jose Marti during a ceremony in which children put flowers on the hero's monument in Revolutionary Square, Havana, Cuba to mark the 150th anniversary of Marti's birth, Tuesday, Jan. 28, 2003. An image of revolutionary Ernesto "Che" Guevara is seen on building at left.
(AP Photo/Cristobal Herrera.)

"We are free, but not to be evil, not to be indifferent to human suffering, not to profit from the people, from the work created and sustained through their spirit of political association, while refusing to contribute to the political state that we profit from. We must say no once more. Man is not free to watch impassively the enslavement and dishonor of men, nor their struggles for liberty and honor."