by Associated Press from BANGKOK

MAY 1, 2020 - BANGKOK (AP) — Robot staff debuted at a Tokyo hotel used for mildly sick coronavirus patients under a new plan to free up beds at hospitals overburdened with more severe cases. 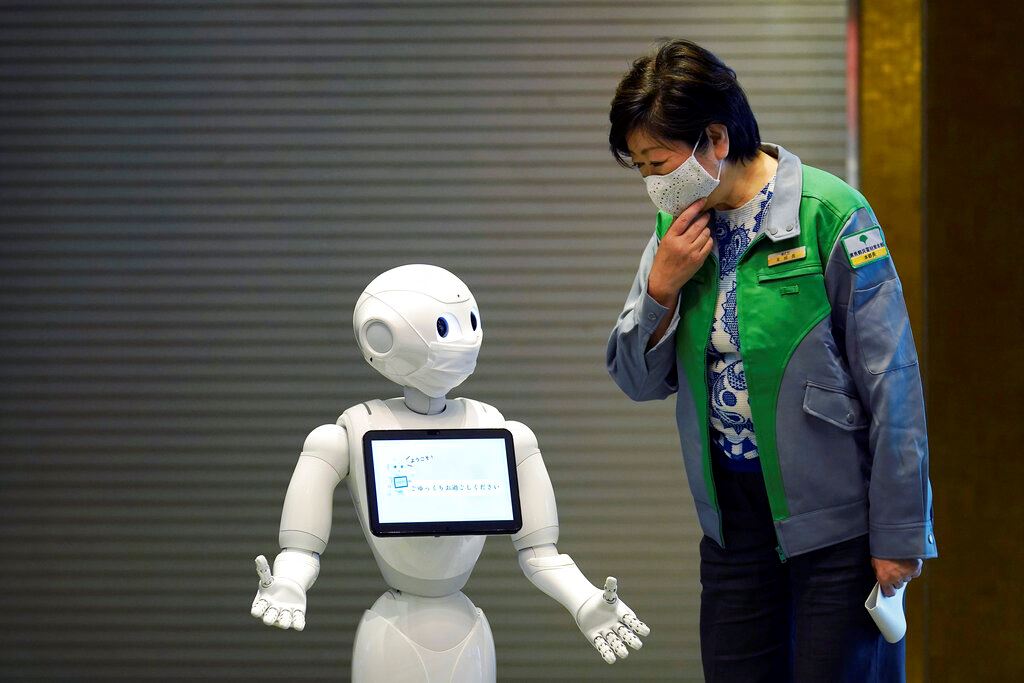 A humanoid robot Pepper wearing a face mask greets Tokyo Gov. Yuriko Koike at the lobby of a hotel for the new coronavirus COVID-19 patients with mild symptoms during a media preview in Tokyo Friday, May 1, 2020. Prime Minister Shinzo Abe said Thursday he planned to extend a state of emergency beyond the scheduled end of May 6 because infections are spreading and hospitals are overburdened.AP Photo/Eugene Hoshiko

Pepper, a talking robot, greets new guests at the lobby, while Whiz, a cleaning robot, operates in areas where patients pick up meals and other daily necessities to reduce infection risks for human staff. 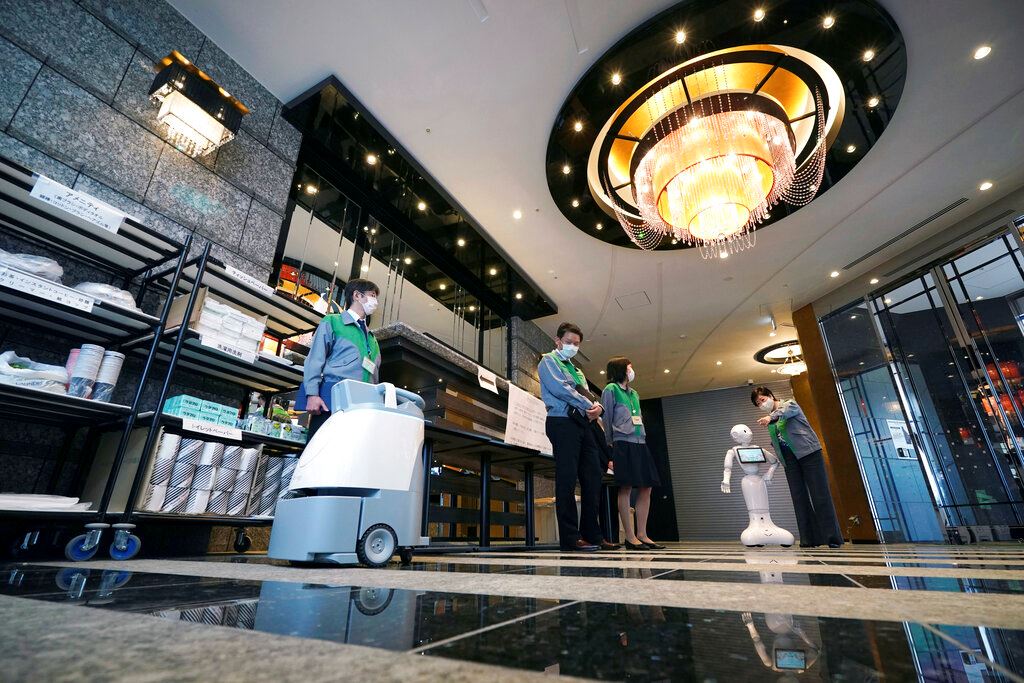 Tokyo Gov. Yuriko Koike, right, observes a cleaning robot operated at the lobby of a hotel for the new coronavirus COVID-19 patients with mild symptoms during a media preview in Tokyo Friday, May 1, 2020. Prime Minister Shinzo Abe said Thursday he planned to extend a state of emergency beyond the scheduled end of May 6 because infections are spreading and hospitals are overburdened.AP Photo/Eugene Hoshiko

Guests can also access health management applications on computers and tablets to record their temperatures and symptoms. 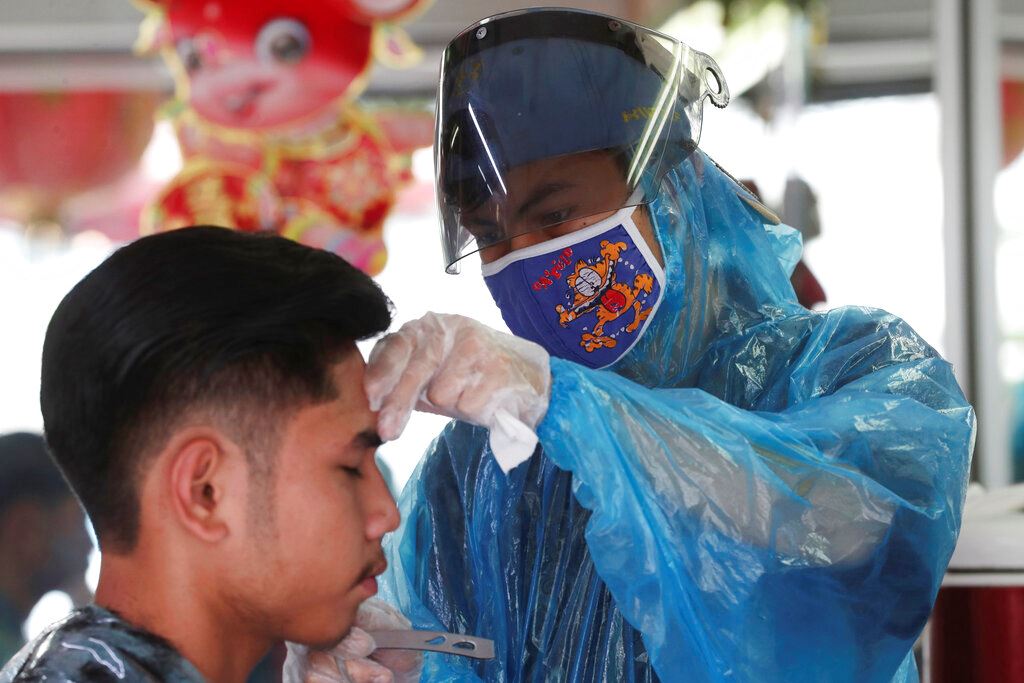 A barber wearing a face mask to protect against the new coronavirus shaves a customer at a barbershop in Jakarta, Indonesia, Friday, May 1, 2020.AP Photo/Achmad Ibrahim

The robots, made by SoftBank Robotics, will also be deployed at other hotels rented by Tokyo's metropolitan government for patients with no or mild symptoms. So far, Tokyo has secured five hotels and aims to increase the number of rooms from the current 1,500 to 2,800.

The hotels are also staffed by doctors and nurses, but officials hope the robots can cheer up an otherwise lonely time for guests who are isolated in single rooms for their weekslong stay. Japan has 14,281 confirmed cases, with 432 deaths, according to the health ministry. 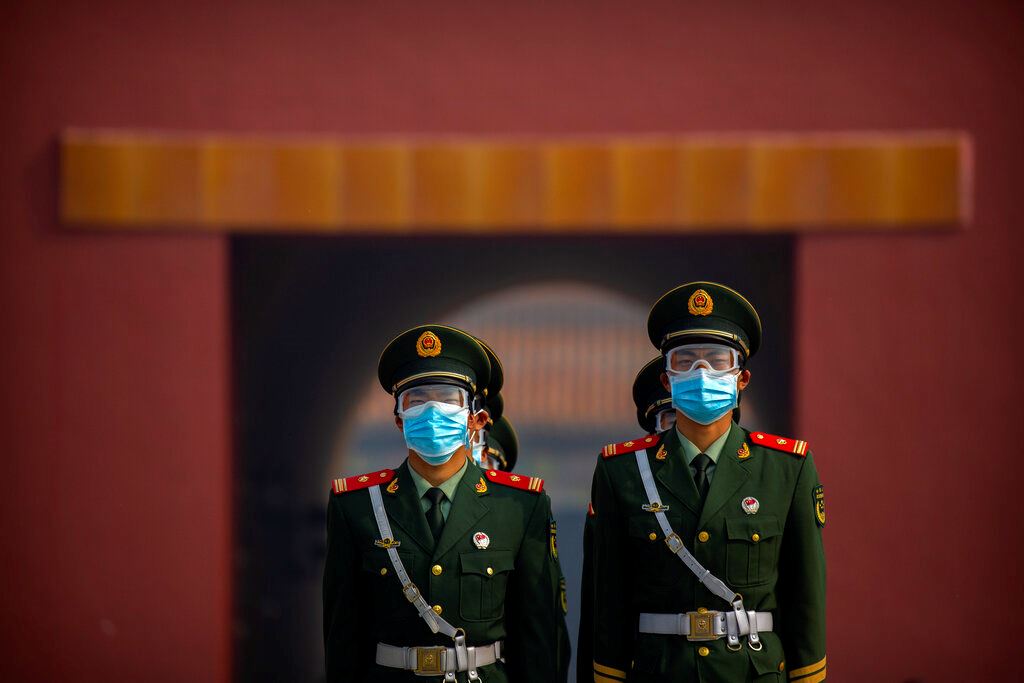 Chinese paramilitary police wear face masks to protect against the spread of the new coronavirus as they stand in formation outside an entrance to the Forbidden City in Beijing, Friday, May 1, 2020. The Forbidden City reopened beginning on Friday, China's May Day holiday, to limited visitors after being closed to the public for more than three months during the coronavirus outbreak.AP Photo/Mark Schiefelbein

In other developments around the Asia-Pacific region:

— JAPAN TO EXTEND EMERGENCY: Japanese Prime Minister Shinzo Abe said Friday that the coronavirus state of emergency that is scheduled to end next week will continue for roughly another month. Abe, citing a report by a government task force, said the country's medical system is still under severe pressure even though Japan has averted an explosion of infections as occurred in many other countries. "We still need you to continue cooperating, and that's the experts' view," Abe said. The state of emergency is voluntary and only requests social distancing and remote work rather than orders that actions be taken. Health experts worry that the lack of urgency doesn't reflect the serious risk in a country with the world's oldest population.

— INDIA EXTENDS LOCKDOWN: India has decided to extend the lockdown of its 1.3 billion people for two more weeks, with some relaxations. The government has identified "red" and "orange" zones where coronavirus cases have been found, where stricter measures will continue. In low-risk "green" zones, some movement of people and most economic activities will be allowed. Although the number of red zones has dipped since the lockdown, the number of green zones has also declined. Most of India's major cities, including New Delhi and Mumbai, are red zones. India has confirmed over 35,000 cases, with 1,147 deaths. The lockdown had been scheduled to end on May 3.

— MALAYSIA TO PARTLY REOPEN ECONOMY: Malaysia will allow most business activities to reopen from Monday. Prime Minister Muhyiddin Yassin says the economy needs to be revived as billions have been lost during the partial lockdown that began in March. Most businesses, including restaurants, can open with social distancing and health screenings. Mass gatherings are still banned, keeping schools, cinemas and worship houses shut and prohibiting group sports. Muhyiddin said Muslims cannot return to their villages to celebrate when Ramadan ends, as inter-state travel will remain banned. Rights groups criticized Malaysia over a May Day crackdown in Kuala Lumpur in which hundreds of immigrants without valid documents were detained in virus hot spot areas. Government officials couldn't immediately be reached for comment. Tenaganita, a local migrant rights group, said Rohingya refugees as young as one were among those rounded up. Human Rights Watch said more than 700 people were arrested and called for their immediate release. 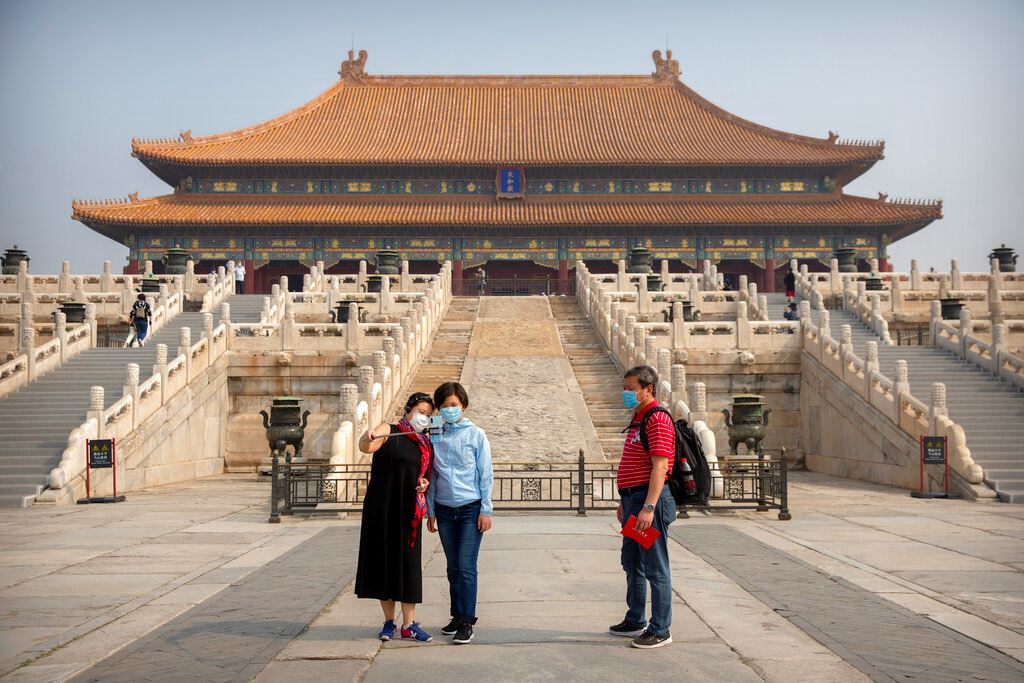 Visitors wearing face masks to protect against the new coronavirus pose for a selfie in the Forbidden City in Beijing, Friday, May 1, 2020. The Forbidden City reopened beginning on Friday, China's May Day holiday, to limited visitors after being closed to the public for more than three months during the coronavirus outbreak.AP Photo/Mark Schiefelbein

— FORBIDDEN CITY REOPENS: Beijing's parks and museums including the ancient Forbidden City reopened to the public after being closed for months by the coronavirus pandemic. The Forbidden City, past home to China's emperors, is allowing just 5,000 visitors daily, down from 80,000. Parks are allowing people to visit at 30% of the usual capacity. China on Friday reported 12 new cases of the virus, six of them brought from overseas, and no new deaths for the 16th day. It has reported a total of 4,633 deaths from the virus among about 83,000 cases.

— SKOREA'S CASES REMAIN LOW: South Korea reported nine new cases, raising its total to 10,774 infections with 248 deaths. Its domestic cases have slowed, and infections linked to overseas travel are dropping as well after border controls were strengthened. That has allowed the government to relax social distancing guidelines as it shifts its focus to easing the shock on the economy.

— CHINA BOYCOTT THREAT WORRIES AUSTRALIAN BUSINESS: China's warning of trade repercussions from Australia's push for an independent inquiry into the beginnings of the coronavirus has rattled Australian business leaders. China has accused Australia of parroting the United States in its call for an inquiry independent of the World Health Organization to determine the origins of the virus and the early response. Chinese Ambassador Cheng Jingye warned this week that pursuing an inquiry could spark a Chinese consumer boycott.

Share your Hero Story on the MY HERO Guestbook