by Komay Sugiyama from San Diego, California in United States

“The agony of being unable to answer the question of why are we the way we are, divisively instead of cooperatively behaved, has been the particular burden of life. It has been our species' particular affliction or condition — our human condition.”

Racism. Genocide. Rape. Torture. War. These dreadful topics plague the human species today. How can it be that we spread love, sympathy, and benevolence but at the same time cruelly torture and kill with no mercy?  No one knows or tries to find the answer and explanation to this quizzical question. Except for Jeremy Griffith. Jeremy Griffith was a unique biologist born in Australia in 1945. He has spent 30 years trying to find the solution to this problem while pushing through many obstacles. The innovation and dedication he demonstrates trying to find the solution is the definition of what a hero should portray.

Jeremy Griffith in an Australian foresthumancondition.comGriffith’s persistent and dedicated attitude despite negative defamation and resistance is the outstanding quality that helped with his discoveries. He started his studies and research at a young age. Bold, independent and dedicated,  “Jeremy has spent the first, often pre-dawn, hours of each day [since 1975] thinking and writing about the human condition, the result of that dedication being his numerous articles and books about the human condition: in particular his 1983 submissions to Nature and New Scientist magazines (which were rejected, with the then editor of Nature, John Maddox, telling Jeremy that his starting point teleological argument that there is an underlying order in nature ‘is wrong’—teleology is increasingly being accepted as true);” (Prosen). As Prosen states,, Griffith has dedicated 30 years of his morning hours to study the human condition. Even then, his work and ideas were rejected for being different than what was believed at the time. He thought that there was no point in continuing if nobody believed in him. Yet, he kept on persisting until something happened. That something happened in 1992 when the books he wrote “...attracted the support of such eminent scientists in the field as Australia’s Templeton Prize-winning biologist Professor Charles Birch, New Zealand’s then foremost zoologist Professor John Morton, former President of the Canadian Psychiatric Association Professor Harry Prosen, and other distinguished thinkers such as Sir Laurens van der Post.” (Clark). His documentary that he wrote also “...received over 100 endorsements from many of the world’s leading scientists and thinkers, including professors Stephen Hawking and Nobel Laureate Charles H. Townes.’’ (Prosen).  Even though the science community referred to his work as a “anathema”, Griffith kept on persisting and believing that his hard work will make a difference in every human’s life. And soon after, the time he spent waking up early in the morning to study and write finally pays off. Griffith’s persistent and resilient mindset helped fight the struggle and defiance that he encountered. 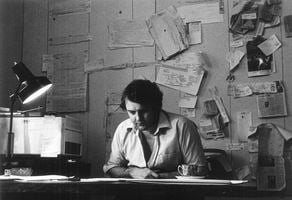 Griffith in his officehumancondition.comGriffith’s innovative and change-making beliefs that change must occur to unify humans expresses the desire inside Griffith to make the world better. Griffith has explained: "What happens when we humans give up our old ways of living and take up the new way of living that understanding of the human condition has made possible is we become transformed from a competitive and selfishly behaved individual to a cooperative and selflessly behaved one, an integrative part of humanity." (“Australian Biologist”). Here, Griffith explains that for humans to transform into a united and cooperative species, change needs to occur. This expresses how he is a person that adapts the world to himself. A key trait a hero should embody. Griffith originally was a normal human living his life like any other human, starting his own business and studying endangered animals. But “In time, he realised that trying to save animals from extinction or trying to build ideal furniture wasn’t going to make a difference to the extraordinary imperfection in human life and that he would have to get to the bottom of the issue of this seeming complete wrongness of human behaviour, which is the issue of the human condition. And so it was while building his furniture business that Jeremy first began to write down his ever developing thoughts about the problem of the human condition.” (Prosen). Griffith, upon discovering the topic of the human condition, unearthed the fact that living a normal life would not change the world. Griffith wanted to make a difference in the world and so he decided that an innovative and hard-working biologist would be fit for the job. It is to Griffith’s innovative, and change-making mindset and belief that we owe his achievements on the human condition to.

Jeremy Griffith was always a person that believed in his goals and never gave up. He knew that to make a difference in this world, it would require hard work and persistence, yet he took on the task because he wanted to make the world a better place. “The Australian biologist Jeremy Griffith has dedicated his life to bringing fully accountable, biological explanation to the dilemma of the human condition (Prosen).” Griffith , who used to be an ordinary biologist changed the world’s understanding of our condition, inspires people that a difference can be made if they persevere through barriers and keep pushing. And to be innovative and change-making, persisting until something happens. These things that he inspires show that Jeremy Griffith wasn’t an ordinary biologist. He was a change-making hero.