by Noah Gabriel from San Diego, California in United States

I never imagined being on television. 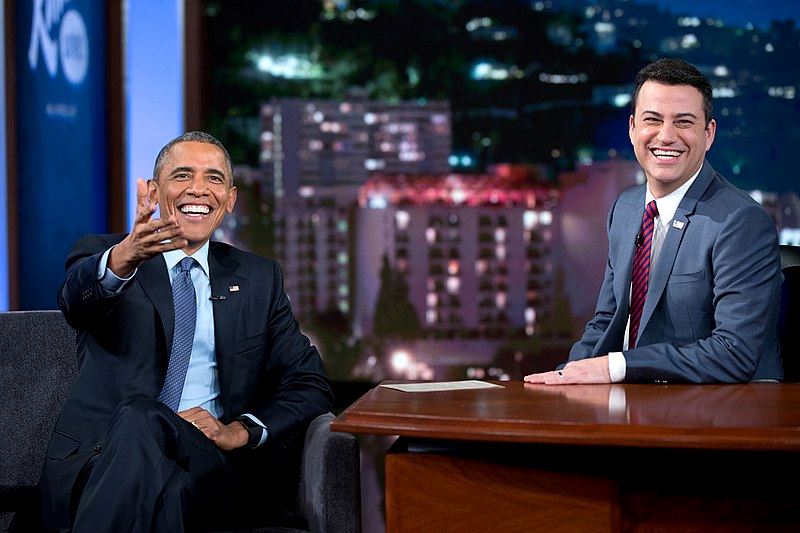 Jimmy Kimmel Talking to ObamaPete Souza [Public domain]In the world of violence and people pointing at each other for causing something, comedy late night shows are like the sun shining through the cloud. Jimmy Kimmel is a late night host that helps us relax and laugh with his jokes and the fun activities he does with famous celebrities. As a kid “he was an enthusiastic fan of popular late-night talk show host David Letterman” (“Jimmy Kimmel”). As he grew up he was a part of a radio show and appeared on a game and talk show. However, “Kimmel’s career reached new heights in 2003 when he began hosting his own late-night talk show on ABC, Jimmy Kimmel Live! (“Jimmy Kimmel”). From hosting his own show he has rocketed to fame and even had “hosted awards shows such as the The 68th Primetime Emmy Awards in 2016 and The Oscars in 2017 and 2018” (“Jimmy Kimmel”). However, recently his baby son had a heart disease that was able to be treated. More so, he used his show to talk about it and how having healthcare helped him with paying all the medical bills. He also talked about how having healthcare should be something that everyone has and not only a few have. Jimmy Kimmel is not only a comedian but an everyday hero through his passion and being focused on the future.

His passion for comedy and his view of politics have made many look up to him and even support him. “Last year Jimmy’s need for affordable health care. And then his hometown of Las Vegas was shot up in a horrific massacre, so he fought through angry tears to plead for gun control” (Snierson). Once this had happened, he went to the media to express his feelings and his idea. The media has connected the whole world, especially the television, and people use it to open up and express what they believe. Although it can bring the worst out of some people, it usually brings out the positive side of people that always want to help and be there. People support Kimmel in what he believes, and they want things in the US to change. On his show, after his son’s surgery he said in his monologue:

“If your baby is going to die and it doesn't have to, it shouldn't matter how much money you make. I think that’s something that whether you're a Republican or a Democrat, or something else, we all agree on that, right? I mean, we do. Whatever your party, whatever you believe, whoever you support, we need to make sure that the people who are supposed to represent us, people who are meeting about this right now in Washington, understand that clearly. Let’s stop with the nonsense. This isn't football. There are no teams. We are the team” (”Jimmy Kimmel Opens Up”).

His passion to change health care shows that he cares for others and his family. The political controversy has been a big deal ever since Obama left office, and Jimmy Kimmel puts it more on the spotlight. The idea that he wants everyone to have health care that they can use when being in the hospital shows that he cares for everyone’s well being, whether it be an elderly person or a child who was born. Jimmy’s passion for change helps many people become optimistic and begin to look up to him and support him.

Being future focused, he hopes for America to be a place where politics won't divide us. After talking about health care and his son, he pleads: "Let's pledge allegiance to common sense….” (Snerison). His devotion and hope for a good future shows that not only does he want to have a happy life but that people around world are happy too. He uses his talk show for comedy, but its his outlet to tell everyone his opinion. With a world of so many gray areas, using common sense could save many lives. His message to his viewers during his monologue was not only his opinion but a plea: ”It’s the United States. Don't let their partisan squabbles divide us on something that every decent person wants. We need to take care of each other. I saw a lot of families there and no parent should ever have to decide if they can afford to save their child’s life. It just shouldn't happen. Not here” (“Jimmy Kimmel Opens Up”). He dreams of a future where America isn't in a constant argument over topics such as healthcare. He believes that people should all equally have an opportunity to get healthcare. He doesn't want people to have sympathy for him and his family, he wants them to understand that if it weren't for health care, his son wouldn't have been able to make it. Not only that but he hopes that politicians hear his message and act on it instead of arguing on it. Jimmy’s focus on the future shows us that instead of worrying about the past and the present, it’s better to change the present. Which in turn could help with the future that Jimmy and so many other people envision.

Jimmy Kimmel’s views on politics surprised people due to his comedic personality. His passion for change on health care has caught the eyes of politicians and now has become a bigger debate in the government. Also, his optimism for the future makes many people look up to him. Jimmy tells his viewers what he thinks: “We were brought up to believe that we live in the greatest country in the world, but until a few years ago millions and millions of us had no access to health insurance. You know, before 2014 if you were born with congenital heart disease, like my son was, there was a chance you would never be able to get health insurance because you had a pre-existing condition. And if your parents didn't have medical insurance, you might not live long enough even to get denied because of a pre-existing condition” (“Jimmy Kimmel Opens Up”). Just like every person, health care is an essential thing and trying to convince government to have healthcare for everyone will help the US get closer. This has led many people to help support the idea of affordable healthcare. Not only that but the government has taken Kimmel’s advice and they're trying to find a compromise to keep affordable health care and satisfy President Trump’s demands. In this world, some but not many people stand up for what they think. It takes someone else for someone to stand for what they think. Jimmy Kimmel wasn't like that, he decided to stand up and state the problem head on. And I think that’s something we should all think about. Instead of someone else standing up and we just follow, we should be the ones to stand up and start trying to make a difference. The world can be turned around, away from the violence and hate if we all stand up for what we think is right and try to fight for it with the help of many people such as Jimmy Kimmel.

“Jimmy Kimmel Opens Up About ‘The Longest Three Hours of My Life.’” Men's Journal, 4 Dec.

ABC - This explains his show and what he does in it. It shows the cast and how he became well known.
Time - After his son’s surgery and trying to convince politicians, one nominated him to be in the 100. This politician explained how he was influenced to push for affordable health care.
Youtube - This is the official youtube account for Jimmy Kimmel. This has clips from his show.