Through Passion and Peace

Many people see superhero as someone who has superhuman powers accompanied by a stylish outfit. However, a hero does not have to be considered a hero because of the superficial factors that they possess. Not all heroes wear capes. It is known that actions do speak louder than words, and a hero is someone who has the ability to act with morality. A hero does not have to be a perfect role model, save someone’s life, or be liked in the eyes of the public but a hero should be someone who understands their values and does what they can to change the world. Heroism should be defined by the hero’s commitment to what they do and what their work is able to do for those around them. A hero is someone with a passion to change the world and to influence it for the better, they must have strong desire and a drive to constantly try to impact the world for the good.

Born in Liverpool during post war England, in a working class community, John Lennon grew up without a mother or a father and only the comfort of his aunt and uncle. Despite his harsh living situation, Lennon turned to music as a form of expression for him. Lennon later became a part of The Beatles, a highly influential band that is known for songs that contain very powerful messages. After the disbanding of The Beatles, Lennon married the love of his life: Yoko Ono, and together they attempted to change the world for the better with their protests and outspoken words. A hero must possess the qualities of being passionate along with influential. A hero should be someone who is committed about their duties. Because of his passion for the well-being of others and his actions that drive influence on society, John Lennon truly embodies the aspect of a true hero. 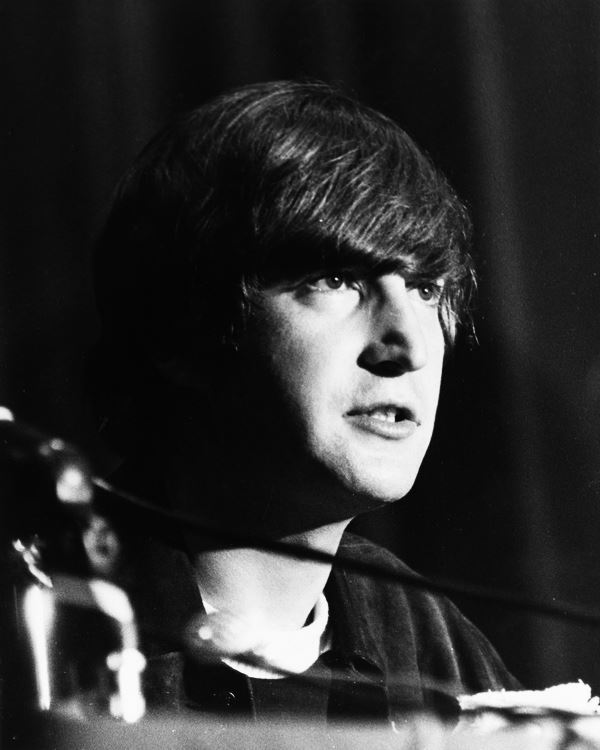 John LennonVern Barchard [Public domain]John Lennon used his passion for human welfare as an outlet to speak out and advocate for world peace, making him a man of action much like a superhero. Larry Kane, a man who Lennon helped with honoring his late mother, spoke up when honoring Lennon’s memory and said: “ ...From the time I picked him up at the railroad station to his departure on Sunday night, John was sensitive, giving and tireless. On the phone days ahead of the event he said, “Larry, I know this is being done in memory of your mother. I will make this happen and it will be great baby! It was... John was in town meeting thousands of real people and leaving behind a legacy of unselfish giving that will always be etched in my mind.” (Ono 116) . Lennon found time to go out of his way for people and to find peace between him and others. When stating that Lennon was “tireless” and yet still had the energy to help him, Kane shows that Lennon  was constantly committed to promoting the well being of other humans. He communicated with Kane through signs of peace and help and that left a mark on Kane. With the caring nature and strong commitment to peace that he had, Lennon left an impact on others that was unforgettable. Through his passion for others, Lennon embodies the caring nature of a superhero. Nevertheless, Lennon showed passion for others through his music as well. When writing his hit song “Imagine”, Lennon discusses the current events that are going on through his ingenious lyrics: “Imagine no possessions/ I wonder if you can/ No need for greed or hunger/ A brotherhood of man/ Imagine all the people sharing all the world, you” (Lennon, “Imagine”). Lennon uses his passion about world peace and tries to show to the listener what his ideal world would be like. By using his musical ability as an outlet to speak out on real life issues, Lennon allows the listener to peer into the world of peace and harmony, hoping to give them a new perspective of what the world could be.  Lennon paints a picture to the listener of a world without violence and suffrage, and voices it as the world that he dreams to live in. He uses his passions to reach out to people and to show them what they are able to achieve when they help one another and when they all seek to care about the well-being of one another. Through his profound and powerful acts, Lennon showcases what humans are capable of and how caring for each other’s welfare can impact the world. Lennon carries on a legacy, not just because of his musical abilities, but because of his actions that he did to advocate for the well being of other humans and for the world as a whole.

John Lennon used his influence on society to communicate his beliefs about the world and what the strength of love can do, making him someone who wants to change the world like a hero would. In her poem that is dedicated to Lennon’s artistry and his effects on the world, Alicia Keys states: “… To me, that is John Lennon:/ A musician who can touch the soul/ One who cared about the world/ A man who stood up!/ A voice that simply sang to the part of us that needed to be spoken to/ I thank God for a spirit that lives on through song and memory./ In the days of a drought, inspiration is hard to find/ But with a man so diverse as Lennon/ We will never be without a verse,/  a prose,/ a word,/ a melody,/ a chord,/ or a song of which to grow from…”  (Ono 117-118).  Keys tells of her admiration for Lennon’s raw ability to create music and how it has the capability to move people. Lennon was a man who loved the world and cared about the issues in it. She can feel the passion in Lennon’s music and how he contributed the current situations that were going on in the world to his music. Lennon was passionate about the world and the things going on in it and did his best to showcase that in his music. He spoke and influenced the people through his music and tried to reach out to them about real life issues that were happening. Instead of sugar-coating his music and having his audience peer through rose-colored lenses, Lennon tries to educate them on real-life issues. Lennon combines his two passions of music and the world, and uses them to create meaning to move others like Alicia Keys. In The Beatles, Lennon tried to communicate his beliefs as well. Lennon used his influence to create a song to move others across the world with a simple message, Turner, when studying this song states: “To mark the occasion, the Beatles were asked to write a simple song that would be understood by viewers of all nationalities. Writing began in late May, with Paul and John working on separate compositions, until John’s ‘All You Need Is Love’ emerged as the obvious choice. The song was not only musically and lyrically uncomplicated but it also perfectly captured the aspirations of international youth in the summer of 1967. This was the time when the war in Vietnam was at its most intense and the ‘love generation’ showed its opposition by staging a number of peaceful protests. “It was an inspired song and they really wanted to give the world a message,” said Brian Epstein. “The nice thing about it is that it cannot be misinterpreted. It is a clear message saying the love is everything.”... The single was released on July 7, and became the anthem of the Summer of Love, a paean to peace, love and understanding. ” (Turner 216-217). Lennon and “The Beatles” have had a remarkable effect on the world so much that they had been chosen to write a song that really reached out to the public and had delivered a message that spoke out to everyone. It was Lennon’s idea to create a song that was so utterly simple yet extremely effective about the effect of love on the world. This was during the harsh times of the Vietnam war and when many protests emerged, it was this song that attempted to reach out and convey the feelings of these times and what they really needed. Lennon helped to create a song that was thought up from the most simple idea. With Lennon’s idea, they were able to create the song “All You Need Is Love” which  conveyed such a beautiful message that it became the anthem to the Summer of Love. The song helped influence peace, love, and understanding within the world.  Lennon constantly used his influence for good and for the benefit of the well-being of the world, he has time after time communicated his stance of love which has brought the world a little bit closer to being a whole.

It is passion and actions that influence the public for the better that make up a hero. John Lennon is a man that used his passion for human welfare to drive his influence on the world. Lennon was a man that advocated for peace and followed his morals for the benefit of others. He used his actions to do his best by the people and used his talent for writing to put out a message of love for the world. Lennon was a man who greatly influenced the world by caring about issues that really mattered and by creating a profound message of what true harmony is within the world. To me, Lennon is an inspiration because he was a man who was passionate and influenced the world for the better. Lennon inspired people by staying true to what he believed in and being committed to benefitting human welfare. Because of Lennon’s remarkable drive and passion, I have been inspired to go after my own passion. I have a passion for the entertainment industry that I have been chasing for quite some time now. As a young woman of Asian background, I grew up seeing people in the media who didn’t look like me and ever since then I was passionate to make a change in the arts industry.  Lennon’s passion to change the world for the better inspired me and  made me realize that I wanted to change the image of the media. I want to be that person in media who young Asian girls can look up to. Like Lennon, I want to be someone who can inspire others through change. I want to change the world and I am passionate about it. Lennon is a hero because he holds the passion to make the world a better place and uses his influence to power that. He is not only admired for his tactics of singing and writing, but because of the messages that he puts into his actions. Lennon is a man that is truly worthy of the hero title.