by Andrew Hale from San Diego, California in United States

"Nothing in life is more liberating than to fight for a cause larger than yourself, something that encompasses you but is not defined by your existence alone." 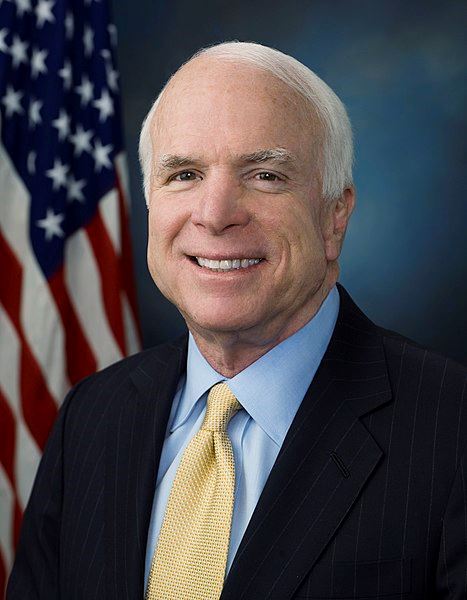 John McCain Official PortraitUnited States Congress [Public domain]Because of heritage, some people were offered freedom from the prison camps in Vietnam; refusal meant countless months of brutal, ruthless torture, and only a mad man would deny this beacon of salvation. John McCain was a military boy who served more than he needed to. When he was young he never considered pursuing any other career besides being in the navy (Wells 11). He grew up with a dad and grandpa having a military legacy forced upon him. John Sidney McCain III strived to prove himself beyond his ancestors. Through tiresome hardships of naval academy McCain made it to the front. But from October 26, 1967 to March 17, 1973, McCain remained as a prisoner in the Vietnam War (“John McCain”). He showed great feats of honor though his actions during the war. He sacrificed his sanity for fairness. Even after the hardships in the military, he continued to serve his country by becoming a congressman and a senator. John McCain served two lifetimes of service for his country, and never strayed away from his beliefs making him a maverick in the military and in the Republican Party.

Service ran in his blood, he had a history of military but McCain served his country beyond his forefathers. When Vietnamese soldiers found out about the McCain legacy, they offered John early release: ¨His refusal resulted in a round of torture that included knocking his teeth out, hanging him by his broken arms, and beating him almost around the clock for a week. Although the abuse never succeeded in convincing McCain to accept early release” (“John Sidney McCain, III”). McCain didn’t want his lineage to make him above the rest. He sacrificed himself to abide by the American prisoner of war code of conduct. His bloodline didn’t him, he was only as good as he proved himself to be. In 2008, after McCain lost the presidential election, he went directly back to working for his country: “Humbled but determined that his political legacy would not be as a failed presidential candidate, McCain returned to the Senate, where he continued to play a prominent role,” (Wilentz). McCain never cared if he failed at presidency, he only wanted to better his country. He moved on accepting the loss and continued to do his good work. Although it was a smaller position, McCain never got discouraged and kept fueled with pride for America. McCain’s selfless service proved himself a hardworking individual that would would go to any lengths to support the people in his country. 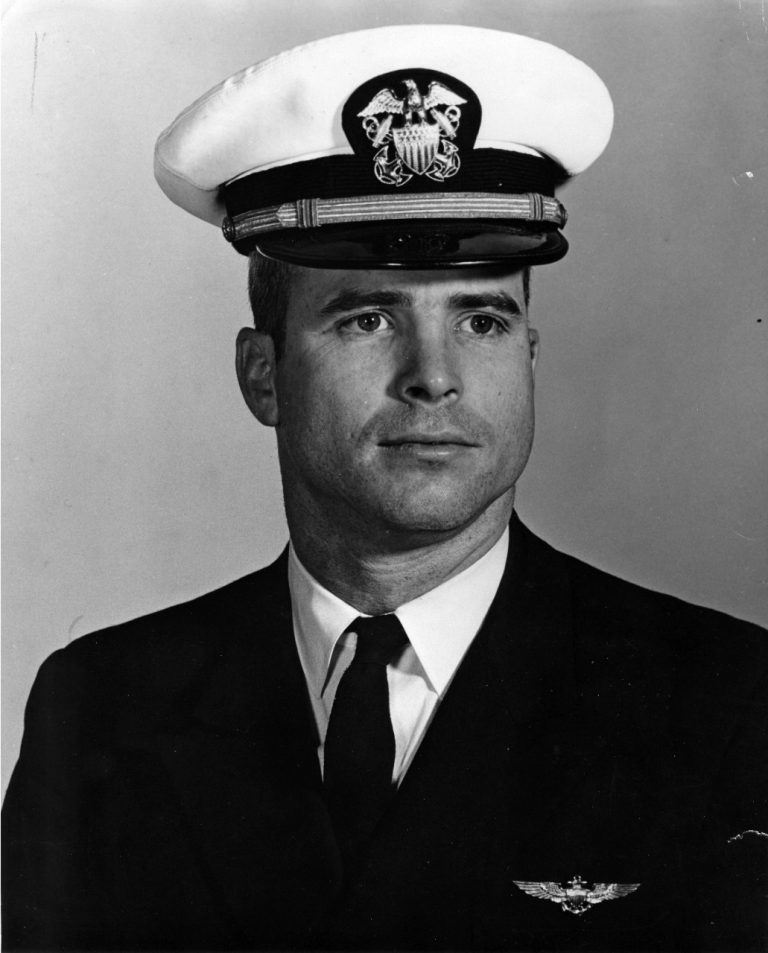 Lt. John S. McCain, 1964 U.S. Navy photo/ReleasedMcCain believed to work for the greater good of his country, and he let no political motives deter him. In an interview with Charles P. Pierce, McCain addressed his famous heroism in Vietnam, “When somebody introduces me like, 'Here is our great war hero,' I don't like it," McCain remarked to Charles P. Pierce in Esquire. "I want to be known as the guy who's trying to reform the telecommunications business, who's trying to see the cable rates deregulated,” (“John McCain”). McCain didn’t care about being admired by others, he only wanted to help his country. He never peaked, he always strived for further greatness. Greatness in his perception is helping his country. During a political event woman claimed she couldn’t trust Obama for being an Arab. McCain claimed, "No, ma'am. He's a decent, family man, citizen, that I just happen to have disagreements with on fundamental issues. And that's what this campaign is all about," … the crowd booed. “I admire Senator Obama and his accomplishments, and I will respect him. I want everyone to be respectful, and let’s make sure we are. Because that’s the way politics should be conducted in America” (qtd. In Yancey-Bragg). Even when McCain was running against Obama, he still defended him although upset many of his supporters. This action lowered his chances of winning over the Republican party making it less likely for him to get votes. McCain didn’t act based on political advantages, he acted on his moral compass. After his commander scolded John for not doing a good enough job with his sheets, he ripped them off his bed, “McCain did not agree with the judgement and marched into the captain's office. ‘Captain, please don’t do that again. I am too busy to make my bed twice a day.’ He then turned and walked out. Few plebs were willing to make this kind of risky move” (Wells 15). McCain stayed true his beliefs. When he thought he was being treated unfairly, he spoke up. Even when the action was risky or even unheard of, McCain did what he honored and believed. McCain didn’t pick what was safe, easy, or expected, he did what was right.

Throughout McCain’s service, he famously or infamously earned the nickname “maverick” from the media. John Sidney McCain, III dedicated his life to creating a better country. His actions changed the course of history by supporting the first African-American president and establishing important diplomatic relations with a country America went at war with for 20 years. McCain never slowed down his motion of making America truly great. After all his years of experience, McCain wanted to share his knowledge to the youth. In 2005 McCain wrote two books, “Both books emphasize the importance of such qualities as honesty, integrity, curiosity, and bravery. McCain especially hoped youths would read his books to learn about politics and the importance of character” (“John McCain”). If you’ve ever taken the easy way out, you are not alone. The obvious choice for anyone would be to take advantage of your advantages. John McCain didn’t believe in that. He believed in earning everything, he sacrificed himself if it meant proving himself fairly. Some politicians aren’t about creating a better future for this country, they care about winning over the opinion of the public. McCain didn’t care about how many votes he would get or how long he stayed a prisoner, he cared about doing was right. John McCain caught my eye because he is the man who follows his own compass. When I can’t decide between right or wrong, it’s because I know the right answer will not satisfy everyone. It doesn't matter if you are trying to be cool or just helping a friend. When a choice is yours to make, it means exactly that. McCain made his own choices and they were the choices of a maverick.