by Jessica from Pukalani

"Offer help for any and all of their needs. Especially advise that serious cases should be taken to the new Hawaiian hospital, where all food and treatments are free." 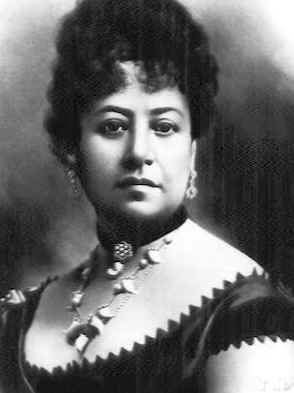 Queen Emma of Hawaiiretouched photograph by J. J. Williams, based on an earlier photo [Public domain]

Emma Kalanikaumakaamano Nae'a Rooke, later to become queen of Hawaii and the wife of King Kamehameha IV, was the daughter of George Nae’a and Pani Kekelaokalani Young. She was adopted at birth by her mother's sister, Grace Kama’iku’i Young and her husband Dr. Thomas Charles Byde Rooke. Emma was born on January 2, 1836. It is unclear of her birthplace, but it is a possibility that she was born on the sands of Oahu because her mother lived there. During her young life, she attended Chief’s Children’s School from January 3, 1842 to August 7, 1849.

In February 1854, Queen Emma got engaged to Alexander Liholiho and was married two years later on June 19, 1856. Alexander Liholiho later became King Kamehameha IV. Together they had one son named Prince Albert Edward Kauikeaouli Leiopapa a Kamehameha who was “the last child ever born to a monarch of Hawaii.” Sadly, he only lived to the age of four. Queen Emma, overwhelmed with her son’s death, spent four days sitting beside his grave. Depressingly, King Kamehameha IV's life came to an end only a year later. The queen then took on the name of Kaleleonalani, or “the one who walks in the heavens,” because her thoughts were always with her dearly departed son and husband.

As queen, she is most famous for the co-founding of The Queen’s Medical Center, which opened on August 1, 1859. Queen Emma and Kamehameha IV went door-to-door to solicit money for the building of the hospital. It was named in her honor and is located in Honolulu on the island of Oahu. The Queen’s Medical Center still provides free health care for people of native Hawaiian ancestry who are not able to afford medical care. Patients' families who are not from the island of Oahu are able to stay in on-campus housing. The hospital's policy is to treat all patients with emergency and urgent care needs, regardless of nationality or ability to pay. In today’s world, this is quite amazing. No one does anything for free. Queen Emma was indeed a very special woman who cared for others dearly.

The legacy of Queen Emma goes above and beyond the institutions she founded. The Queen Emma Foundation manages her lands, which are on the islands of Oahu and Hawaii. Monies generated from these lands are used to support the hospital in providing health care to Hawaii’s people. Queen Emma is not only my hero because she is a woman, but because of her accomplishments and the care she had for her people. She was kind and generous and everything I hope to become one day. Queen Emma departed this world into the heavens above more than 100 years ago.

PBS Learning Media | Amplifying Indigenous Experiences - This gallery walk lesson plan was created through the PBS Digital Innovator All Star program, which identifies and supports PreK-12th grade educators, that are local thought-leaders and classroom changemakers, for ongoing professional learning and growth, and to serve as teachers of teachers for their peers. The lesson plan amplifies the life stories of UNLADYLIKE2020 indigenous women Queen Lili’uokalani, Susan La Flesche Picotte and Zitkála-Šá.