We needed to be assertive as women in those days - assertive and aggressive - and the degree to which we had to be that way depended on where you were. I had to be. 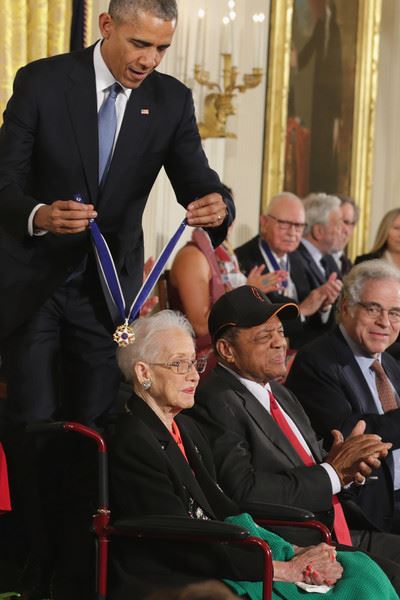 Obama awarding Katherine Johnson with Presidential Medal of Freedomhttps://trustmovies.blogspot.com/2017/02/februarys-sunday-corner-with-lee.htmlThroughout the course of history, women did not have the right to own money, property, or a voice. In other words, no one really respected them. One woman who defied the stereotypes regarding a woman’s place in society was Katherine Johnson. Johnson was recognized as a “human computer” or mathematician at NASA. One of her most prominent accomplishments was her help in John Glenn’s space mission, in that she helped calculate orbital movements of where Friendship 7 would land along with Apollo 13 and other numerous space shuttles. Along with facing the prejudice against women working with NASA, she also faced the difficulties of being a person of color, single mother, and a woman. Johnson exemplifies an impressive display of education. She was a graduate from West Virginia State College in 1937 when only about 10 percent of women earned college degrees. Then later married and lived with James Goble and her three daughters in Virginia. She worked hard enough to achieve a job at NASA which changed her life as well as the space administration. Johnson helped with many moon landings as a “human computer”, a person who is advanced at mathematical calculations before electronics were invented. Johnson was a mathematician at NASA for 33 years who calculated rocket flights. Due to Katherine’s knowledge and help with the Friendship 7 shuttle, John Glenn couldn’t have landed on Earth. Because of her hard work, she was awarded the Presidential Medal of Freedom and America’s highest civilian honor by president Barack Obama. Likewise, assisting with Friendship 7 and Apollo 13 ultimately unveiled her bravery and perseverance. By exemplifying perseverance and bravery at the face of racism and sexism, Katherine Johnson is a hero that continues to inspire people everyday to never give up.

Katherine Johnson is counted as a hero because she possesses bravery. When men were facing difficulties at NASA she stepped in with, “‘Let me do it,’ Katherine said to Ted Skopinski. Working with Skopinski as a computer (or ‘math aide,’ as the women had been renamed when the NACA became NASA), she had proven herself to be as reliable with numbers as a Swiss timepiece and deft with higher-level conceptual work”(“Katherine Coleman Goble Johnson”). Women had stricter lives in the 30’s where you could only listen and nod your head when a man would speak his mind or state an opinion. Seeing Johnson lead the way and do the work contrasts her from a normal submissive woman. For her to barge in and take control puts others in shock, proving how brave she is. Johnson was surrounded by men who were intimidating at work but she held her head up: “She queried her male counterparts in detail about briefings and was not shy about suggesting that she be present. At one point, a man who had co-authored one of her reports stood up to a boss who wanted her name excluded from the document, arguing that he was transferring away, and besides, Johnson had done most of the work”(“Katherine Johnson”).  When she persuades one of the men to put her name in a document, she speaks out and goes beyond her limit for credibility. If Johnson hesitated to ask for something no other woman has ever had the audacity to ask, her name would have never been in history and no one would know that a woman is just as capable as any other man of the same job. These actions of risking it all exposes her bravery and starts to define only a part of her heroism. 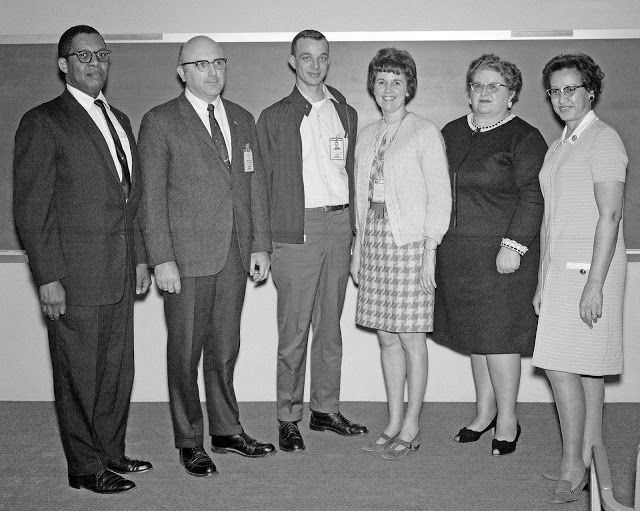 Katherine Johnson (right) with NASA Colleagueshttps://www.tes.com/lessons/yF1DcKG5flrmBw/hidden-figureJohnson’s perseverance is another part of what make her a hero. While she tagged along with the NASA group, John Glenn specifically called for her, “asked engineers to ‘get the girl’—Katherine Johnson—to run the same numbers through the same equations that had been programmed into the computer, but by hand, on her desktop mechanical calculating machine. ‘If she says they’re good,’ Katherine Johnson remembers the astronaut saying, ‘then I’m ready to go.’ Glenn’s flight was a success, and marked a turning point in the competition between the United States and the Soviet Union in space”(“Katherine Johnson Biography”). This begins to reveal her possessing perseverance because she always tried and never gave up to the point where people who are in higher ranking have absolute trust in her such as John Glenn. He trusted her with his life, knowing she would successfully decode the numbers. Her resistance to giving up helped her thrive to the top and strongly prove her worth. Another time she didn’t give up was during her teen years, “Only about 10 percent of women earned college degrees. Johnson went into teaching, one of the few careers that were open to women”(“Hidden hero”). In order to be offered a job with such a high maintenance, she had to keep up with her studies. Being able to earn a degree as a minor of society shows how diligent she needed to be. She strived to get to the top which contrasts her from other women. The way she expresses her perseverance through hard work during hard times of history defines her as a hero. 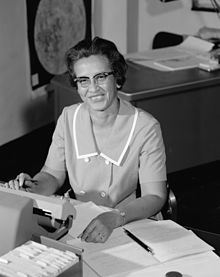 Katherine Johnson at NASAhttps://www.revolvy.com/main/index.php?s=List+of+African-American+mathematiciansJohnson has had a long life at NASA and truly proves her bravery and perseverance which verifies her as a hero. She went through many abrupt times to the point where she felt a small portion of doubt but ignored it and completed her goals. She inspires others because there are many women who hope to find a career in astronomy, specifically at NASA. Astronomy, being a difficult job to earn and manage, puts others in doubt wondering if they could do it. She put time and work into her job and discovered so many things which makes someone tell them self they are capable of anything and inspires them to achieve their goals or maybe even discover something and help improve others. Most importantly, she not only has inspired women to work hard, but other minorities in general trying to achieve anything big or small in life. She helps bring us all out of our comfort zone, risking it all because after, we will feel so proud of ourselves and others as well. Katherine Johnson showed us how our race, gender, or skin color does not put boundaries or limits to what we can do.

The True Story of 'Hidden Figures' and the Women Who Crunched the Numbers for NASA - An article that talks about Katherine Johnson inspiring others to make a movie about the women behind the astronomers and space shuttle calculations.
Barbie Inspiring Women - Barbie website with new dolls of women role models throughout history that inspire girls all over the world.
Katherine Johnson: A Lifetime of STEM - Website of the NASA administration where Katherine Johnson was known for working at. Has true facts of Johnson and how her life was at NASA.
Makers | Katherine Johnson - Contains an interview of Katherine Johnson talking about the experience at NASA from her perspective.