by Jessica Atkins from San Diego, California in United States

“A real hero...is someone who may attract attention but directs that attention beyond himself or herself and reflects in their daily lives everlasting values. Heroes help us embrace and aspire to values that we might not be able to live up to” (Harper). How often do we find ourselves seeking inspiration from others when we do not feel that we are not living up to our full potential?  Many times we need to see others succeed as inspiration for our own success. Harper shows us that we turn to our world heroes for this inspiration. Since each individual has his or her own goals for success, many different types of heroes exist. Each hero has a different future in mind, and a different way of creating that future. But all heroes share the determination to achieve their goals in bettering the world for everyone. Heroism is most likely found in the average citizen, can be as simple as a random act of kindness, and is impactful. Kindness initiates a chain reaction of inspiration and action. Heroism always begins with a choice to put the needs of others before one’s own wants, and dedicating time to bettering a community. It begins with selflessness and an initiative for influence.

An average American teen, Katie Davis, has remarkably modeled these heroic traits. Katie J. Davis Majors was born on November 2, 1988, in Brentwood Tennessee. She comes from a faithful Christian family, and always looked up to Mother Teresa for her own inspiration (Contemporary Authors Online). She desperately wanted to go on a missionary trip before graduating high school, and convinced her mom to let her go to Uganda to volunteer. Despite her youth and inexperience, Davis began helping the impoverished, sick, and dying Ugandans by dedication. She quickly discovered her love for the African nation, and was summoned to stay another year as a kindergarten teacher. Her parents hesitated at their daughter’s desire, but eventually agreed to her plan to spend a year in Uganda, then come home to fulfill her college education. She kept this promise by returning to America for less than a school year, but Uganda had stolen her heart, and she left America feeling that God had willed her to be in Uganda. In 2008, while living in Jinja, Uganda, Davis founded a non-profit organization, Amazima Ministries, and has adopted thirteen Ugandan girls. Since then, she has also written two books, Kisses From Katie and Daring to Hope. Her life came with many sacrifices. However, Davis persisted because she had complete faith in God’s constant presence and provision. A hero must possess selflessness – the will to sacrifice oneself for the sake of others. A hero must also be influential, or carry out a positive impact on the world. Despite others’ disapproval of her lifestyle choices, Davis deserves the title of a hero because she prioritized others selflessly, and has influenced many through her organization.

Davis’ selflessness reflects heroism because she has contributed to improving others’ lives by humbly putting them before her own life. In the foreword of Daring to Hope, Ann Voskamp writes about Davis’ the selflessness that Davis showed when she opened her door to care for a wounded man: “A man with a flesh-eating virus limps to the door. Katie opens the door wide and grabs him a chair, and I watch her dress his wound. Katie’s hope is a verb that reaches up, that reaches out, that has hands and a heart.” (XII).

Disregarding any other plans she may have had that day, Katie chose to focus on the man in need. Davis did not look for recognition, but helped him from the bottom of her heart. Many would have been hesitant or worried about helping a diseased stranger, but truly selfless people, like Davis, can put others first naturally without a complaint. Davis made many sacrifices in order to become a missionary in Uganda, such as giving up her American life, and becoming a young mother to many girls:

In her book, Davis candidly explains how she made such a huge and life-altering decision to give up the life of a normal American teenager and become a humanitarian worker at such a young age... She also explains that she never meant to adopt so many children so quickly, but knowing that they would have no place else to go if she did not take them in left her feeling that she had no alternative. (Contemporary Authors Online)

These sacrifices of giving up “the life of a normal teenager” and taking in children demonstrate the actions that have shown Davis’ selflessness. Davis’ charitable heart has willed to jump at opportunities for sacrifice if it means bettering another life. Slow to judgment, and always showing unconditional love, Davis has striven to reflect the actions of Christ, her own hero, which explains why she has modeled selflessness in such a good manner. Davis has constantly found ways to help others, and shows it in her reflection of her daily life helping children in Uganda: “I spend countless nights awake with dying, or at least critically sick, children. I love them and I cuddle them. I wipe up their vomit. I hold them and pray over them and tell them how special they are and how Jesus really loves them” (220). Davis’ description of her work gives the impression of simplicity. She could not immediately heal the sick, but more importantly brought them joy by telling them “how special they are” and also brought joy through prayer. While other “heroes” consume attention rather than directing it to those neglected, by prioritizing not only others’ physical necessities but spiritual nourishment, Davis recognized that children need to be loved personally. Davis has displayed the trait of selflessness by prioritizing service in her life and humbly making sacrifices for the sake of others.

Furthermore, Davis deserves the title of a hero since she has greatly influenced many through her organization in Uganda, Amazima Ministries, by providing education, food, career, and medical services. Davis’ organization started by deciding to change the fact that the needs of many Ugandan school children were not being met. Wanting to better their lives by teaching them what love meant, Davis wrote, “Many of them had never had a parental figure to guide and love them. I wanted to teach them about the love of their heavenly Father, but this proved difficult with children who had never felt the love of an earthly parent. I knew that in order to teach them this love, I needed to at first show them” (Kisses From Katie, 51). Davis’ compassion is effective in teaching the children the “love of an earthly parent.” Davis taught the children through actions as a parent would do. Davis’ influence in these children leads them to thrive inwardly by teaching through love in everything that she does and outwardly by providing them with service. In addition to her care for the children of Uganda, she desperately wanted to change the lives of the women who did not know how to support themselves or their families successfully. She decided to form a beading circle to help them make earnings: “One of the many things I love about these women is that they are happy to have honorable work. Those who are part of the bead group are not allowed to engage in prostitution, brew alcohol, or pick through trash; those are the rules.” (Kisses From Katie, 190). Davis reached past the boundaries of poverty and struggle by providing opportunity to the women now “happy to have honorable work”, which shows her dedication in influencing those around her. Her influence improved not only their lives, but many more, since the beading circle eventually grew into a full time program offered by Amazima Ministries. Just one small change can make a huge difference, and any average person, like Davis, can become an influencer trough hope. Furthermore, Davis began her own organization starting from contributions from family and friends in America to fund Amazima Ministries, which now proves as one of the most influential in Uganda: “Amazima has since grown into a substantial organization with a 700,000-dollar annual operating budget. It feeds and educates about 2,500 children, many of whom have been orphaned by parents who died of AIDS or in Uganda's ongoing civil war” (Contemporary Authors Online.) By the statistics stated above, one can see how vital Amazima Ministries has become to Ugandans. Despite the fact that she was a single, twenty-two year old American woman living in Uganda, she persevered to establish her own organization. Not only is this decision prominent, but it also has contributed to helping thousands of lives. Striving to influence lives on a local and global scale every day, Davis has greatly contributed to Uganda through Amazima Ministries, and has worked her way past the obstacles that living in Uganda presents. 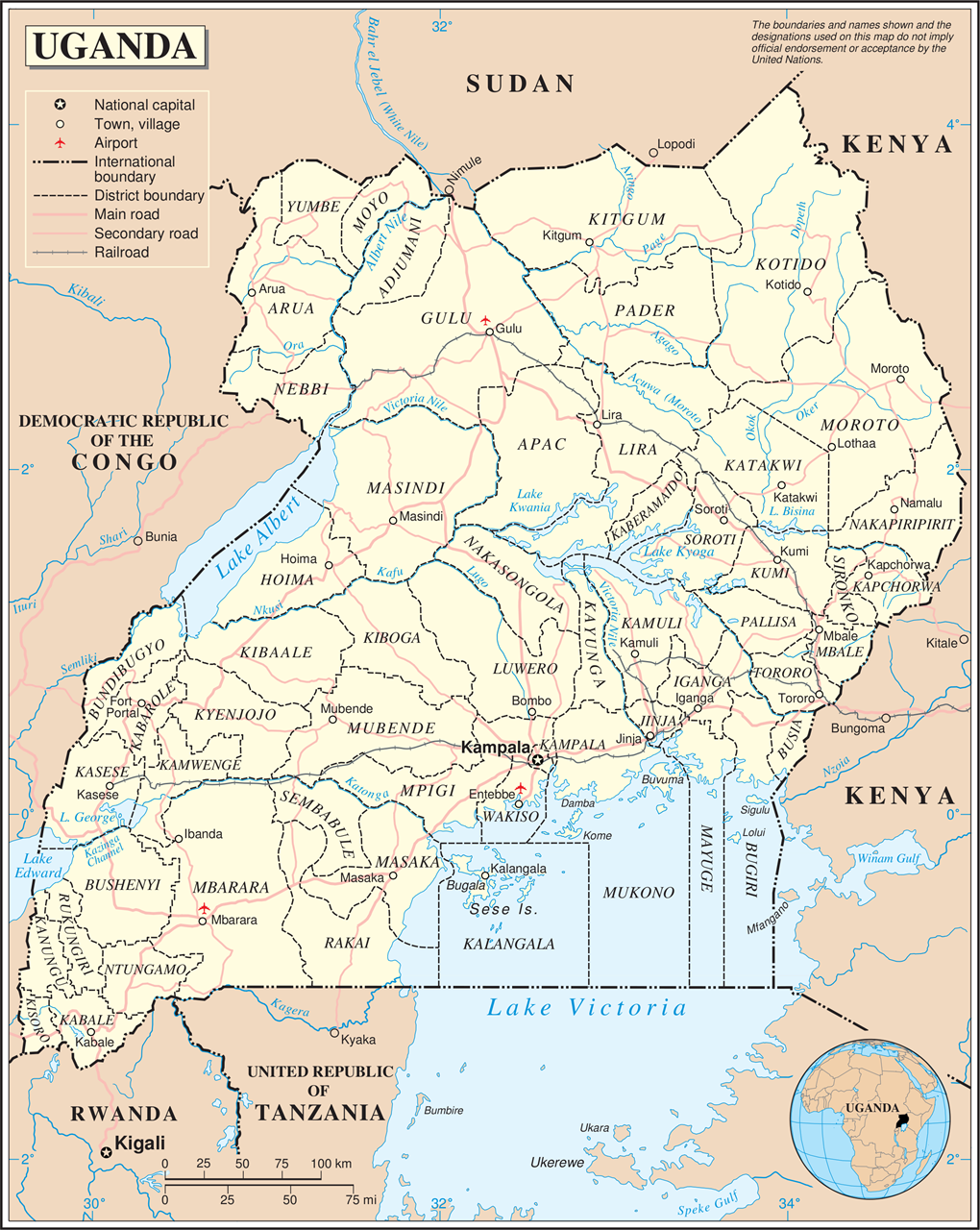 Uganda, AfricaWikimedia CommonsDavis models the heroic traits of selflessness and influence by persevering through her tough lifestyle in Uganda in prioritizing others and influencing many through Amazima Ministries. Sacrifice does not come easy, but by sacrificing her American life, Davis has had the ability to transform thousands of Ugandan lives. She has restored the sick to health, bathed the unclean, fed the hungry, educated the poor, and given work to the unemployed. But above all, she has given family to the forsaken, not only by adopting her thirteen children, but also by teaching children and her readers around the world that they are loved by the Heavenly Father. Davis overcame the hurdles that her young age, nationality, and womanhood bestowed her while living in Uganda, and managed to found her organization, which now provides education, food, healthcare, vocational training, and discipleship to many Ugandans in need. She continues to influence thousands of lives not only in Uganda, but throughout the world by the publication of her inspirational books. Davis inspires me because she started out as a young American girl like me. Her love of God inspires me the most. She sparks a love for God and others in my heart when I read her story. I received Kisses From Katie as a Christmas gift from my mom, and I really enjoyed reading the book. It made me think about my life in comparison to the lives of the least fortunate in Africa. It enlightened me to the realities of poverty in the world, and the things I take for granted.

Harper, Reverend Charles F. “How Should We Choose a Hero?” My Hero.