by Zack Jones from San Diego, California in United States 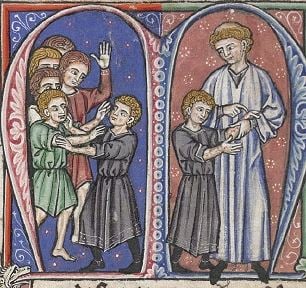 King Baldwin IV diagnosed with leprosy"Baldwin IV of Jerusalem"When people think of kings, what comes to mind? A rich, spoiled, greedy man, or a noble and just knight? Both have been true for many kings in history, but not for King Baldwin the 4th of Jerusalem. King Baldwin the 4th struggled with leprosy, a crippling disease that withers the body bit by bit. Baldwin was diagnosed with leprosy at the age 6. He was roughhousing with the other boys when it became apparent that even though Baldwin had cuts on his arms, he felt no pain. At the age of 13, Baldwin’s father died and he became king, despite his illness and young age. Throughout his life, his health got progressively worse until he eventually died in 1185, at the age of 22. Even though his life was short, Baldwin still was able to show great perseverance and courage in battle. Living with leprosy in the Middle Ages wasn’t easy, nor was defeating the Egyptian king at the age 16. King Baldwin the 4th showed perseverance and courage throughout his short life; therefore, he is a hero. 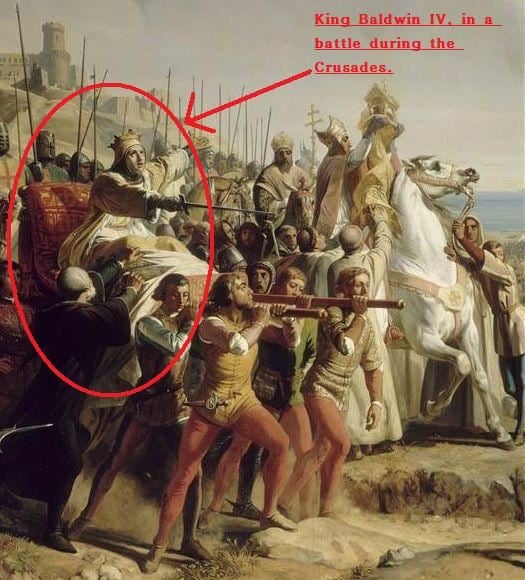 King Baldwin in battleRas Tafari Renaissance Revelations King Baldwin showed great perseverance, in battle and in life. Leprosy starts off by attacking small nerves in the skin, resulting in a loss of feeling. And if the illness is left untreated, the disease will attack the larger nerves like joints and limbs. Even though he was crippled, Baldwin still commanded his forces on horseback; and when he could no longer feel his legs, he commanded his men atop a litter (“Leper King, Baldwin IV of Jerusalem”). This shows Baldwin’s great perseverance because despite his illness, he was still willing to fight alongside his men. Baldwin wouldn’t let leprosy define him by still fighting in battle. Also, at the time of Baldwin’s reign, 1174 to 1185, the barons and lords of the kingdom were power hungry, which made holding the kingdom together very difficult; especially for a 13 year old boy. But Baldwin was still able to hold his kingdom together in its greatest hour of need (Schrader). This shows Baldwin’s perseverance because despite his illness, he was still able to hold his kingdom together, and keep it away from civil revolt. In order to be an effective king, you must command respect. Even in his position, Baldwin was still able to command the respect of his barons, which took great perseverance. Baldwin shows perseverance repeatedly throughout his life, as well as courage. 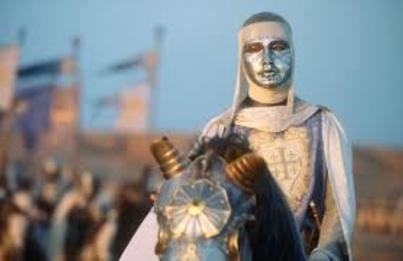 King Baldwin IV in the movie "Kingdom of Heaven"Defender of JerusalemKing Baldwin showed great courage in battle and as a leper king. A 16 year old, a leper, goes out onto a sandy battlefield to do battle against the Egyptian King. The leper has only more than 300 knights, and is going against an army of thousands. How does he win? King Baldwin the 4th defeated Saladin, the Egyptian Sultan at the time, when he was only 16 years old (Schrader). Saladin himself was known to be a great military genius, so for a 16 year old leper to defeat him was an unusual sight and definitely took great courage. Going to battle against one of the most powerful men in the world at 16 years old takes great courage. As Baldwin’s health deteriorated, the threat of Saladin only greatened. Even when his health was deteriorating, Baldwin still managed to successfully defend Jerusalem from all of Saladin’s attacks, repeatedly (Schrader). To go to battle and defeat the Egyptian King as a leper once is astonishing, but to do it several times even as his health was deteriorating is incredible. Baldwin could have been like the hundreds of other kings who would hide behind castle walls in his position, but instead he showed great courage by going to battle alongside his men. Despite his crippling disease, Baldwin continued to fight against the Saladin’s attacks.

King Baldwin IV in the movie "Kingdom of Heaven"strangehistory.netKing Baldwin the 4th showed great perseverance and courage throughout his short life; therefore, he is a hero. Baldwin showed perseverance and courage by standing up against the Islamic threat even though his illness would prohibit him otherwise. He fought alongside his men, won great victories, and kept his kingdom from the brink of destruction. Despite being young and crippled, King Baldwin the 4th continued to be extremely prominent in the protection and well being of his kingdom. Baldwin wouldn’t let his age or leprosy define him, and neither should we. We all have weaknesses, but we can’t let those disadvantages define us; we can’t let them keep us from making a great impact on the world. “The true soldier fights not because he hates what is in front of him, but because he loves what is behind him,” (G.K. Chesterton).