Kitty Richardson is the MY HERO Assistant Film Festival Director. She was honored with the 2021 MY HERO International Film Festival Emerging Artist Award and came first in the Unsung Hero competition. Kitty applied to be a college intern at the MY HERO project in 2020 while attending the University of Leeds for her year in industry. Kitty’s other contributions to the project include music video productions, short video portraits, interviews with filmmakers and original short films. Her film about autism was also award-winning. 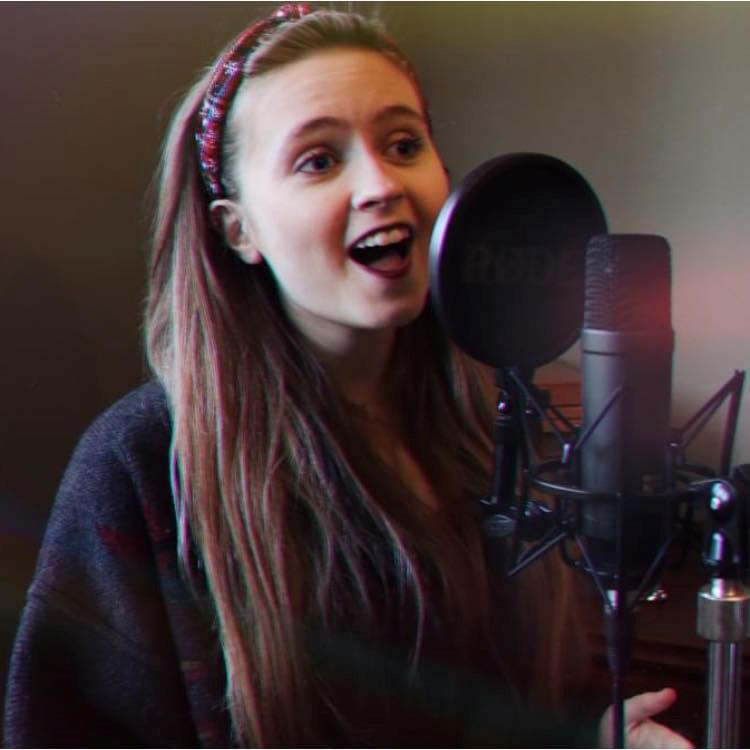 'I Will Stay Strong’

My daughter, and MY HERO’s current intern Kitty Richardson, is an inspiration to me - not just for her incredible talent and work ethic, but because she has heroically faced and overcome so many obstacles in her, relatively, short life.

We currently live in the UK, but Kitty was born in the USA in 2000. The maternity care there was incredible, and our perceptive pediatrician predicted that new-born Kitty would be unique: ‘bright’ and ‘in need of A LOT of attention’. Don’t all babies? From an incredibly early age, though, Kitty was inquisitive, alert and in the constant pursuit of stimulation, which would often result in colic and she did not sleep. This curiousness and intensity did not dissipate, as we were told, but developed with age.

It was not until she was 12, however, that we discovered some of the reasons for her ‘interesting’ infant years. Around this time, Kitty moved from a small junior school to a larger, middle-school. We had chosen the school because, Kitty was very bright, academically and she had started to show promise as a musician. She was also intense and passionate and continued to need a lot of stimulation. Although we did not know it at the time, Kitty had a rare condition called Ehlers Danlos Syndrome (EDS)*. Through sport, she would be injured most weeks – broken or sprained wrists and sustaining many joint dislocations. We spent far too much time in the ER and the stress of this,  along with the demands of the music department, the 10-hour days (including Saturday school), extra homework as she was in the top sets, all combined with her neurodiversity (her autism also not yet diagnosed) resulted in Kitty developing acute anxiety. Something had to be done.  So, we moved her to a grammar school that proffered shorter days, did not demand 12 hours of sport a week and that presented a more nurturing music environment. 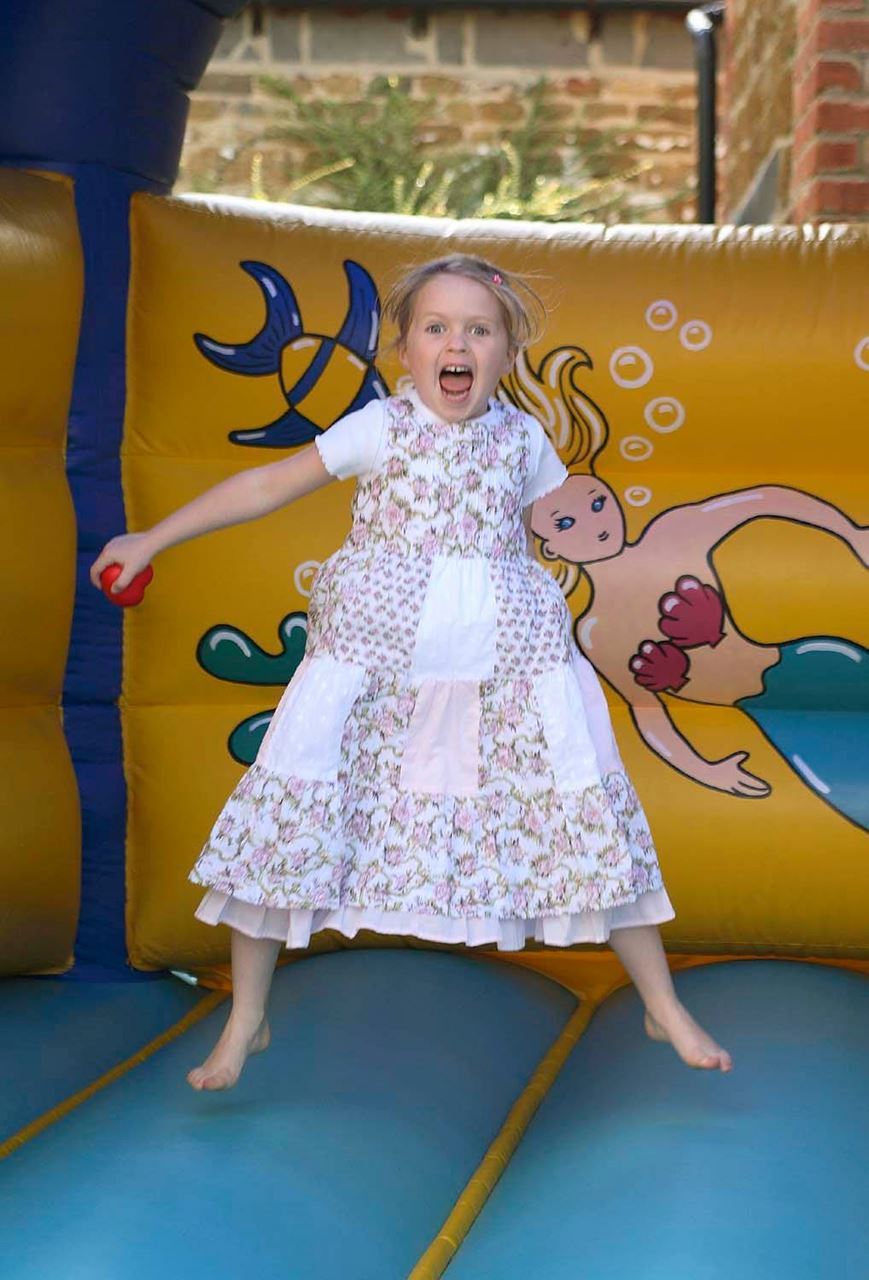 Age 5Peter RichardsonKitty enjoyed her new setting and her anxiety abated for a while as the mechanisms of the school day became less demanding physically. But then, her EDS related dislocations became a lot worse and more frequent – hips would pop out simply by getting up from a chair and her spine dislocated stepping off the train. Ambulances were sent for and finally the doctors started to pay attention; a specialist in London finally confirmed the EDS Type III (hypermobility) diagnosis.*  There is no cure (yet) - individuals must learn to live with joint instability, dislocations and other painful conditions related to having a deficit of collagen and connective tissue proteins. A wheelchair was purchased, the school rearranged timetables to accommodate first floor lessons. Sport, school trips and public transport ceased. Feeling so physically out of control, I think, had an impact on Kitty’s mental health and she started to hallucinate and hear voices. After much harassment of the Doctors again, and some very worrying few months, Kitty was, eventually, diagnosed with autism.

Kitty embraced the diagnoses – they answered so many questions and explained a lot. She threw herself into her song writing, predominantly in order to help the EDS charity promote awareness of the very rare and often undiagnosed condition. Her song 'The Cure', written aged 12, became the charity’s anthem, which Katy Melua endorsed and The Sylvia Young Theatre School in London donated a recording studio for a few EDS sufferers to record a live version. Her subsequent album ‘Two Minds’ was sold online, via Spotify helping to raise awareness and funds for the charity.

Through all of this, Kitty only missed school when absolutely necessary and her grades remained outstanding. I was not shocked by the autism diagnosis, but Kitty hid it so well that some of our family and friends were skeptical. Kitty’s obsessions, her inability to switch off as a baby, her intensity, her incredible memory, her ferocious loyalty, difficulties with flashing lights and loud noises all made sense. Her concluding lyrics in ‘The Cure’ sum up, not only her attitude to having EDS, but also her determination to understand neurotypicals: ‘I struggle every second of every hour. I feel like I have no power, but I will stay strong’. And stay strong she did during the next four years.  We all became more knowledgeable about the autistic spectrum and Kitty worked hard on her anxiety – studying mindfulness, meditating, seeking the help of professionals and, ultimately, immersing herself in her music. 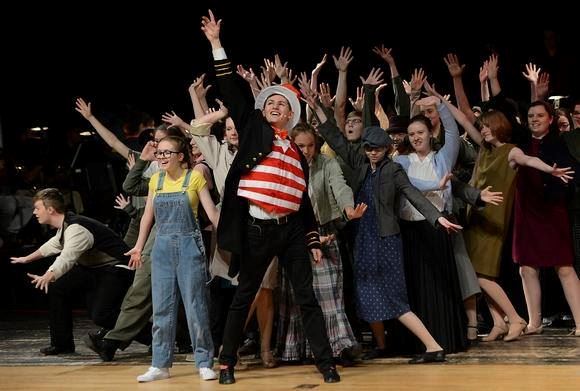 Kitty in Seussical at SchoolHCAMIn 2016, we returned to Massachusetts and Kitty joined Hopkinton High School in her Junior Year. I was nervous about this move – her anxiety was still acute and there had been another development – Emetophobia (the fear of vomit), which resulted in some OCD behaviors - not wanting to go on holiday, socialize or even leave the house except for school. Change had also always been challenging. But Kitty, feeling an affinity with the USA having been born there, wholeheartedly embraced the experience. The students welcomed her enthusiastically. There were moments of tension as she decided to take 6 AP classes on top of the compulsory subjects, some extremely foreign to a student from the UK, but she excelled both academically and within the community. She volunteered and performed at the arts’ center, participated in many plays and musicals at the school and led summer courses for younger students. I realize this sounds typical for an American High School student, but one has to remember that Kitty is in constant physical pain from the EDS, suffers with acute anxiety and her ability to recognize emotion and social cues is limited. She speaks to the latter in her video, 'Do You See Rainbow?' , created for MY HERO, where she documents her experiences of living with autism: ‘I’ve learnt to process your words while also processing your behaviors and mimicking them as if they were my very own. The twitch of a smile; the empathy of kind eyes; the soft tone of the voice….’ Kitty has always taken a great deal of care in analyzing every signal, every expression to fully comprehend a person and a situation. Kitty found her peers in the USA to be less confusing and much more liberal than the ones she had left behind, and so, during this time in the USA, her confidence, resilience and courage grew.

Kitty’s experience at Hopkinton paved the way for her to return to the UK to study Music and Philosophy at the University of Leeds and for her to immerse herself in the arts’ programs there. There was a moment where we all thought leaving home to live in another city would be a step too far, but Kitty battled with her demons and has embraced all aspects of the opportunity. She has been the lead, directed, produced and promoted shows in Leeds and at the Edinburgh Fringe Festival. She has made incredible friends, to whom, I am told, she is very important – her loyalty, kindness and support know no bounds.

The opportunity for Kitty to work for MY HERO is the reward she deserves. Not only is it the perfect fit for her values and beliefs, but it is the ideal vessel for her to explore, cultivate and enhance her many creative gifts. MY HERO, I am very grateful.

Kitty, I am so proud of you. You are my hero. I cannot wait to see what the future brings. I know you will stay strong.

*If you are interested in a definition or more information, please visit: www.ehlers-danlos.com

Since writing this story, Kitty has graduated from the University of Leeds with a First class degree Music and Philosophy and she is now working for MY HERO full time, as well as continuing to compose and make films.

EDS Explained - More information from The Ehlers Danlos Society.
Do You See Rainbow? - Learn about the autistic experience through the eyes of someone with autism
Kitty Richardson's Website
Kitty Richardson Spotify