Laura Ingalls Wilder was a pioneer girl who grew up to be one of the most popular writers of this century. She offered young readers a first glimpse of American life in the late 1800s.

During the time of homesteading, her family attempted to settle into farming, and met with many difficulties. Grasshoppers ate the wheat crop one year, leaving the family with no money. Wilder's father had to leave home in search of work. Her baby brother died, her older sister was blinded after a bout of scarlet fever. The family moved more than a dozen times in search of a good place to farm. They settled in South Dakota (then called Dakota Territory). Winters there were long and often brought dangerous blizzards, cutting the family off from sources of food and fuel.

But the "Little House" stories do not dwell on the great sadnesses of Wilder's childhood, but instead on its small joys: wading in a creek, taking a trip into town, the delightful experience of eating a rare orange, and listening to "Pa" Charles Ingalls play the fiddle and sing late into the night.

Wilder was one of the first authors to show us that pioneer women were smart, skillful people who contributed as much to the welfare of their families as did men. She was a talented woman who did well at anything she attempted. She made enough money teaching school to send her sister to a special college for the blind. Another time, she got a job making buttonholes for a seamstress. Wilder sewed those buttonholes so well and so fast that she was rewarded with a huge salary--one dollar a day!--enough to pay for herself, her husband and daughter to move to Missouri. Later on she became a journalist, once even working as poultry editor for the St. Louis Star. At 63, when most people think of retiring, she wrote Little House in the Big Woods. With the help of her daughter, Rose Wilder Lane, it was published and soon became a great success.

Wilder's heroism lies in the strength and courage with which she met every challenge, and in the lively, open way she shared her life with us. Her books make much of the fact that she was not a perfect angel. She made mistakes, she got angry, she got in trouble. But her honesty only endears her to readers. Few of us can read the "Little House" books without suspecting that Laura Ingalls Wilder is not only someone we like, but someone who is like us.

My hero is Laura Ingalls Wilder, because when Laura was growing up she went through a lot of bad and good things. This inspired me to read and write more because she is my favorite author.

"My hero is Laura Ingalls Wilder. Her book Little House in the Big Woods was the first "real" book I ever read (I was six or seven). Her books turned me into a compulsive reader and inspired me to write my own books."

Laura is like a precious stone with many facets, she is determined, strong-willed, she never settles, she will sacrifice her wants and needs for others, a lover of nature and poetry, passioniate in her ideals, and a steadfast and unwavering wife, mother, Godly woman and friend. The greatest author of all time. As a child I cherished her "Little House" books, as an adult, I apreciate her as a woman, I have found many other stories, books, news articles, etc that Laura wrote during her life. "I Remember Laura" by Stephen Hines is an exceptional work dedicated to Laura and the people that knew her best. To read stories from people that were her close friends and neighbors, not fiction, but real stories, I wish that I had lived during her lifetime. We would have been soulmates, who knows maybe we are anyway. She is the best, No one can compare to her passion and zest for sharing history and the true spirit of the pioneer. 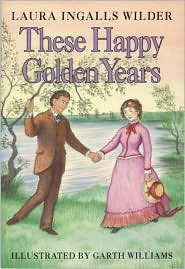