Letter from the diaspora: Why Ukraine will endure

When I close my eyes and think of Ukraine I see sunflowers and red poppies, tables full of food, and smiling faces. It’s how my extended family in Ukraine greets me when I visit. 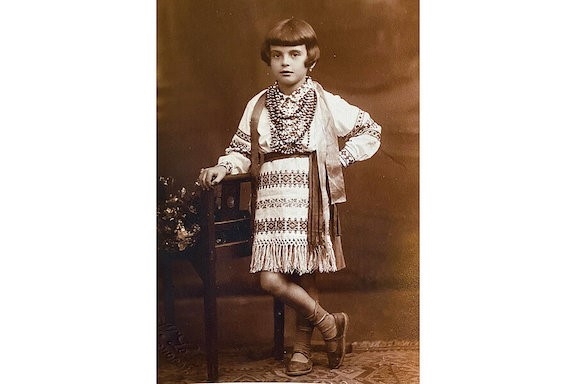 The author’s grandmother Vera wears traditional garb, including an embroidered shirt, in this photo taken circa 1930 in western Ukraine. Courtesy of Lydia Tomkiw

Since the Feb. 24 invasion, I’ve oscillated between sadness, dread, and rage. I check my phone constantly for updates, reach out to family and friends to make sure they’re OK. They are volunteering, donating supplies, making Molotov cocktails, and crowding into basements when sirens wail. They send me videos of terrible destruction. Call your legislators, they say, and ask them to close our sky.

The Ukrainian diaspora is spread around the globe. In the United States, it numbers more than a million. I’m one of them. I was born in America, the granddaughter of refugees. All four of my grandparents fled the Nazis and the Soviets in the 1940s, while some cousins and extended family remained. And now the diaspora is rallying, organizing huge volunteer efforts and demonstrations, and sending aid.

Text messages are constant. “Can anyone help 4 adults and a baby?” “Who has the proper license to send Level 4 armor plates for vests?” To understand the strength and resolve of Ukrainians one must understand their history and identity, and the many attempts to deny both.

My grandparents, like many of their generation, ended up in displaced persons camps in postwar Germany. After years of waiting, they arrived in New York and New Jersey, determined to preserve their language and culture, both of which were under attack by the Soviets. They instilled this sense of urgency in their children and grandchildren. Ukrainian was my first language.

At a young age I’d hear my grandparents say “Bolsheviks,” “Moskaly” (Muscovites), and “znyshchennya” (destruction), but then they’d smile and hand me bowls overflowing with fruit. They taught me generosity and unconditional love.

I learned their stories, too: how my grandmother ran back into enemy territory to find her dog, how my grandfather was arrested in Warsaw for being active in a Ukrainian student group. A priest in the family was executed by the Soviets. Every Ukrainian family has such stories.

My grandmother fled her town of Medyka, now in Poland. Ukrainians are fleeing there now to escape the war. Millions have fled, something not seen in Europe since my grandparents’ time.

Their generation, and others before them, built communities: churches, museums, schools, dance groups, and summer camps to keep Ukraine alive. My grandparents were proud of who they were and insisted on speaking Ukrainian – a radical move during the Cold War years, when being mistaken for a “Commie” was dangerous.

During my childhood, I attended Ukrainian school on Saturdays, taking classes in language, history, and culture. We learned about the short-lived, independent Ukrainian People’s Republic, declared in 1918. We studied the Holodomor, Stalin’s orchestrated genocide by famine in 1932-33, in which millions of Ukrainians died, and the mass arrest and execution of Ukraine’s intelligentsia in Kharkiv later that decade. The Ukrainian language was suppressed and discouraged for decades.

I recited Taras Shevchenko’s poetry. I learned to play the traditional 65-string bandura and to sing folk songs I now hear soldiers singing in videos as they go to war, telling their families not to cry.

In 2007, the National Museum in Lviv exhibited the paintings of Theodor Wacyk, my grandmother’s uncle. I’d grown up surrounded by his portraits and landscapes. When we arrived to see the show, it marked the first time our family had visited since my grandparents had fled. Sadly, by then my grandparents had died. At the airport we were greeted by a crowd of more than 20, all family.

In that moment, I understood why my family had worked so hard to preserve and sustain the culture of their homeland. I remember those days as happy but heavy. The weight of six decades of history hung over a dinner table piled high with exquisite open-faced sandwiches and beautiful tortes.

Besides the stories and toasts of that visit, there was a desire to catch up, to know everyone and everything we’d missed. I felt tired at the end of every day, but I’d fallen in love with a modern, sovereign, complex Ukraine.

Amid the darkness and destruction there today – the sum of my grandparents’ fears – I try to focus on pinpricks of light: Polish friends who took in Ukrainian friends, the shop owner who donated medical supplies, people I haven’t spoken to in years asking how to help. In between donating and volunteering myself, I’ve spent moments of every day thinking of my Ukrainian ancestors. I understand why it was so important to them that their children know Ukraine and its culture. I tell myself that they survived, the language survived, the history and culture survived. And this will continue to be so.