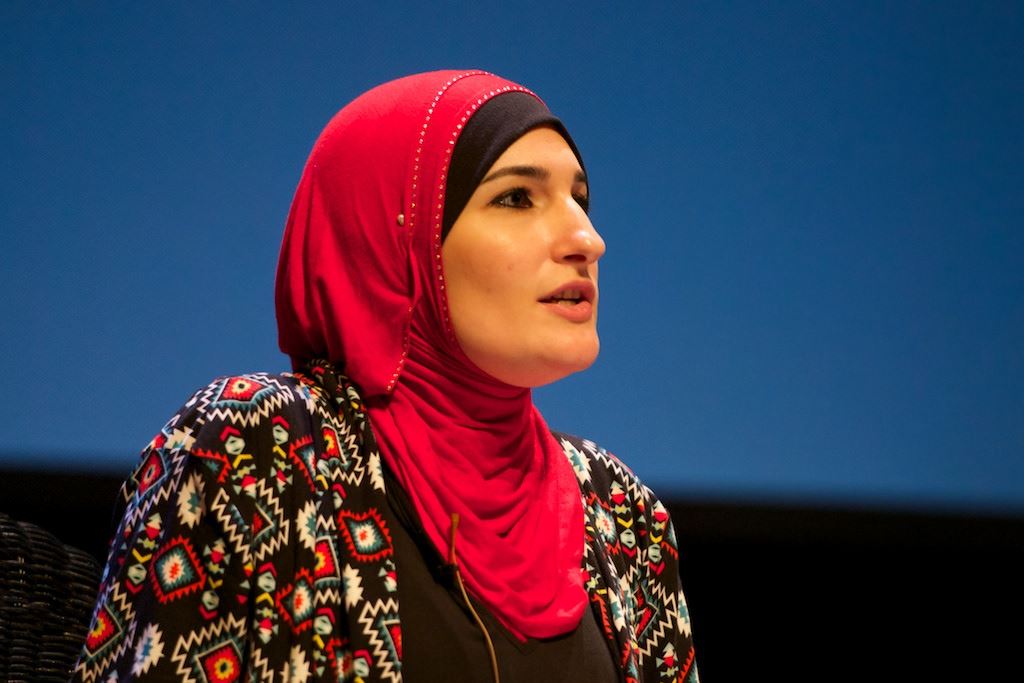 Linda Sarsour Festival of Faiths from Louisville, United States [CC BY 2.0 (https://creativecommons.org/licenses/by/2.0)]Hundreds of thousands of people yelling in the street. Posters held by many colored hands. Police patrolling alongside the protesters. At the front of the crowd, Linda Sarsour, a human rights activist, is leading her brothers and sisters in protest. Linda Sarsour, a mother, caregiver, and the heart of New York, is a human rights activist who fights for the rights of people of color. Sarsour was born March 19, 1980. She was born and raised in New York by her two immigrant parents, who moved here for a better life from Jerusalem, Palestine. Linda is now a mother of three beautiful children, Tamir, Sajida, and Sabreen. Sarsour is also the cofounder of one of the largest organizations in the United States: the Women's March. She has dedicated time and effort to bring rights to not only people of color, but to women. Sarsour is the head of the Arab-American Association of New York. Throughout her life and career, Sarsour has been motivated by her need to help people, because of key characteristics. These include her determination, lionheartedness, and selflessness. Linda Sarsour, a human rights activist, is a hero because she shows acts of lionheartedness when she risks the safety of her life, determination in fighting for equality, and selflessness when putting others needs before hers.

Linda Sarsour is selfless because she puts others needs before hers and cares about the injustice of other humans. As Linda is talking to the majority group, as they do not feel empathy for those who have fewer rights, she says, “This is why you are where you are, because you think rights are only for you” (Ghalib, Ali. “Muslim, American, & Intersectional: The Activism of Linda Sarsour.” American Civil Liberties Union, 22 Aug. 2016, www.aclu.org/blog/immigrants-rights). This is an example of Sarsour speaking on empathy. She teaches people who have more privilege than others that rights belong to all ethnicities, colors, and genders. She lets the minority know that she will continue to fight for their rights, as they do not exist. When Sarsour sees people who are discriminated against, she uses her power to build a community and group that includes everyone, even those who are privileged. Sarsour continues to stand for others' rights as she says, “[The group is] for everyone … grounded in love and compassion and creating safe spaces for people who don’t feel safe otherwise. Black, communities of color, LGBTQ, immigrants, refugees, people who have seen so much trauma in their life and they come to our space for safety. You’re more than welcome to come” (Ghalib, Ali. “Muslim, American, & Intersectional: The Activism of Linda Sarsour.” American Civil Liberties Union, 22 Aug. 2016, www.aclu.org/blog/immigrants-rights/). No matter what anyone says, Sarsour always stands for freedom and equality. She is working on building an inclusive community for all. This quote shows that she takes on the challenge of taking in those who don't have the support they need. She believes in creating hope, peace, and equality within this country by putting other others' needs before hers. Sarsour is not personally affected by the racial injustice endured by Black African Americans, yet she still continues to care for their freedom as if it was her own.

Sarsour shows her lionheart as she continues to strike her bravery every day. Part of her bravery, Sarsour is publicly targeted because of her position in the government. “One day my daughter asked, 'Mom, you think that you'll get shot?' I was, like, Whoa. Of course, I'm like, 'Nope. That'll never happen in America.' But there's a lot of risk” (Ottesen, KK. "Linda Sarsour reflects on the power and risks of being a Muslim activist." Washington Post, 19 Feb. 2019. Biography In Context, https://link.galegroup.com/apps/doc/A574731080/BIC?u=powa9245&sid=BIC&xid=178684ef. Accessed 2 May 2019.). Sarsour's bravery is shown as she takes the risk of being a civil rights activist in the United States. Being such a vocal public figure in New York City, Sarsour knows that she is at risk, but still continues to go out into the courthouse and go against the systematic oppression. Sarsour has raised her children to not be afraid of the consequences that this country has for fighting for freedom. This has become reality, and it takes lots of courage for her to be able to look at the children and lie to their faces about the risks there are to being an activist. Sarsour then continues to have to face the reality of her children living in fear, as she says, “the hardest thing for me as a mother has been explaining to my beautiful, aware, Palestinian Muslim-American children why the country they love is banning people who look like them and share their faith from coming here” (Sarsour, Linda. “Linda Sarsour: Trump’s Anti-Muslim Rhetoric Helps Unite America Against Him.” Time.Com, Jan. 2018, p. 36. EBSCOhost, search.ebscohost.com/login.aspx?direct=true&db=ulh&AN=127674002&site=ehost-live.). Sarsour has experienced the pain of being at the bottom of the pit. She is discriminated against for being a Muslim American who stands for all rights. Her children grew up knowing that they were different than the kids at their school. Throughout the experience of discrimination, this has only made Sarsour stronger and braver than she already is. Parents of color and injustice in this country are forced to raise their children to believe that the world is not full of all hate. 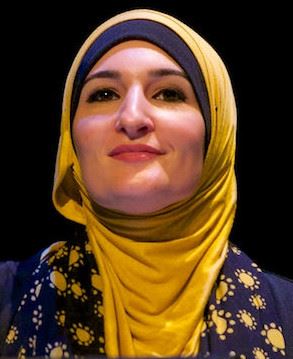 Linda SarsourFestival of Faiths from Louisville, United States [CC BY 2.0 (https://creativecommons.org/licenses/by/2.0)]Sarsour shows determination as she never gives up throughout all the setbacks she has faced. As she tries to fight back against the country, she says, “I told her, ‘They can’t just do that here' ... It hit me that we are a community being stripped of our human rights” (Ghalib, Ali. “Muslim, American, & Intersectional: The Activism of Linda Sarsour.” American Civil Liberties Union, 22 Aug. 2016, www.aclu.org/blog/immigrants-rights/muslim-american-intersectional-activism-linda-sarsour.) This shows determination because Sarsour is insisting that we as a country need to fight for human rights. She has been fighting for rights for about nine years, and till this day she has not gotten the freedom that this country promises. Instead of feeling discouraged, she is determined to continue the fight for equality. She then begins to stand for people of color, as she powerfully says, “Why not follow people of color? ... Because people of color are the most directly impacted by injustice. So guess who wants justice first? The people impacted by injustice. So I want to follow the people who are trying to get to the justice first, and that is going to be the people who are the most pained and traumatized and broken in our country” (Hyatt, Lachlan. “Activist Linda Sarsour Talks Supporting More People of Color in 2020 Election.” Washington Square News, Lachlan Hyatt, Staff Writer, 26 Mar. 2019, nyunews.com/news-2019/03/25/linda-sarsour-skriball-talk-refugees/). Sarsour is determined that minorities will rise up to the expectations that this country has promised all people. She believes that helping the people that need to be helped most is the most important thing for our country. She helps people who are torn and broken because this country is not providing what it has promised. She is dedicated to impacting the lives that have been broken and torn apart by our system.

Therefore, Linda is shown as a hero because she is determined through rough times, selfless when people need her the most, and lionhearted when there may be fright in being a public face. I believe that Linda Sarsour is an inspiration because throughout all the challenges that she has overcome throughout her life, facing discrimination, injustice, and inequality, she has never gave up. She keeps her mind positive and uses her advantages to fight for the rights that her community deserves. She is an inspiration to me because I personally have experienced racial and religious discrimination. She stands up for my brothers and sisters in this country. She puts her life at risk every day to make others feel like they belong here. She has given up her safety because she has hope in what she fights for every day. Because of Linda Sarsour, I am a strong, powerful, Muslim Palestinian-American woman who will not allow this country to look at me any less than what I am.