by Matthew Holloway from San Diego, California in United States

"The way to get good ideas is to get lots of ideas, and throw the bad ones away." Linus Pauling

"Satisfaction of one's curiosity is one of the greatest sources of happiness in life." Linus Pauling 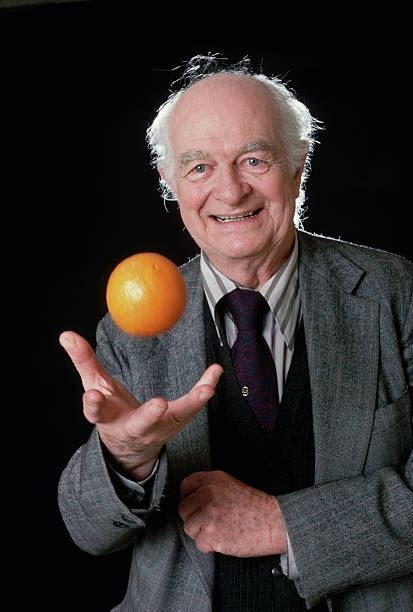 Linus Pauling, American ChemistGetty Images.com          Imagine two young nine-year-old boys in the back of the their parents’ basement, with a long white table covered by a black, thin tablecloth. There’s a small cardboard box on the table with big letters that read “Basic Science.” That was the beginning of Linus Pauling’s long science career. Linus Pauling would turn into one of the greatest scientists to ever live, and a famous political activist. Those characteristics sound like some a hero might possess, but what really is a hero? Is it someone who saves another individual? Or someone we look up to? Heroism can be an ordinary individual who finds the strength to persevere and endure in spite of overwhelming obstacles. Thomas Edison failed 1000 times before creating the light bulb, Bill Gates failed his first company, and Benjamin Franklin dropped out of school at age 10 (Jacques). None of those people decided to give up, they all pushed themselves through their obstacles to complete their goals. A hero is somebody who is selfless, who is generous in spirit, who just tries to give back as much as possible to help people. Linus Pauling was born in 1901 and became a chemist who grew up to discover many amazing things in the world of science. He made discoveries in the electronegativity of atoms and quantum mechanics, and he wrote over 800 scientific articles and books. Pauling advanced quickly through school at Oregon State Agricultural College, which helped him progress educationally and allowed him to do great things in his life. Pauling was a groundbreaking chemist, made extraordinary discoveries in science and continued on to become a famous political activist. He is only person to have received two unshared Nobel Prizes--one for his groundbreaking experiments in protein chemistry and quantum mechanics, and one for being a fearless humanitarian who helped fight against the use of nuclear weapons. 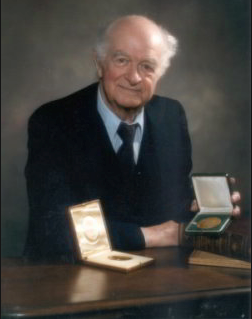 Pauling with both his Nobel Prizeswww.alarmy.com         Pauling's family was fairly poor when he went to college. His mother worked at a boarding school, which did not pay well, so he would work small jobs to help his mother. “Pauling impressed the professors with his knowledge of chemistry, and, by his junior year, he was teaching a class on general chemical principles and laboratory techniques. The paid position allowed Pauling to stay in school and to send money to his mother” (Hager). Even though Pauling’s beginnings were difficult, his great mind and love for science helped him support his family and continue his goal of becoming a scientist. Once he graduated from college, he continued in the field of chemistry and moved onto study the nature of chemical bonds. Pauling experimented with new information he learned and discovered, but his work with chemical bonds are what he is most famous for. After graduating college, Pauling received his PhD, and went to Europe for two years to work with other scientists. “In 1926, a Guggenheim Fellowship sent Pauling to Europe for 18 months, during which time he studied quantum mechanics” (Linus Pauling Biography). Quantum mechanics are the mathematical description of motion and interaction between subatomic particles. After learning about basic quantum mechanics such as the Schrödinger wave equations and the study of structural chemistry, Pauling began some marvelous work. “By devising techniques such as X-ray and electron diffraction, he was able to calculate the interatomic distances and angles between chemical bonds” (Funk & Wagnalls New World Encyclopedia). Pauling's significant work was done after learning about quantum mechanics and mixing that with what he already knew about chemical bonds. “Pauling released a six page paper, detailing six basic rules, later named ‘Pauling's Rules’” (Linus Pauling and the Birth of Quantum Mechanics). The papers stated the basic principles of molecular structure. “In 1939, Pauling put his ideas together in a work called The Nature of the Chemical Bond. The book is widely considered to be one of the most influential chemistry works ever written” (Hager). This was just one of a stellar series of over 800 scientific papers Pauling wrote spanning an amazing range of fields like Vitamin C and nutrition, cancer, and AIDS (Pauling). “In 1954 Linus Pauling won the Nobel Prize in Chemistry thanks to his accomplishments in quantum mechanics and its relation to general chemistry” (Rose). Pauling spent many years studying protein structure and how it related to quantum mechanics, and it paid off for him once he won the Nobel Prize. “The development of quantum mechanics during the 1920s had a great impact not only on the field of physics, but also on chemistry. During the 1930s Linus Pauling was among the pioneers who used quantum mechanics to understand and describe chemical bonding - that is, the way atoms join together to form molecules” (Pauling). He wasn't done with his work, as he continued to make discoveries in science for many years after that, including helping Watson and Crick. “James Watson and Francis Crick, who along with Maurice Wilkins received a Nobel Prize for determining the structure of DNA, give much of the credit for their discovery to Linus Pauling. The alpha helix, a secondary protein structure, which Pauling discovered, is also a key part of the structure of DNA” (Rose). Pauling was extremely nice and helped out many other scientists with very famous work. Pauling is also known for his work with Vitamin C, and how he said it could help cure viruses, diseases, and aging. “His advocacy of megadoses of vitamin C for the common cold, cancer, and AIDS is still controversial, and one of the works for which he is best known. His life and career were characterized by controversy, and almost everything about him was larger than life” (Kauffman). Pauling was one of the first people to realize oxidation causes aging. This led to him advocating for mass amounts of Vitamin C, which was controversial because people doubted his ideas. “Pauling was once characterized by New Scientist as one of the twenty greatest scientists of all time, on a par with Isaac Newton, Charles Darwin, and Albert Einstein” (Kauffman). Pauling’s experiments and discoveries were groundbreaking, and he continued to study and teach new advancements at CalTech as a professor after he won the Nobel Prize. 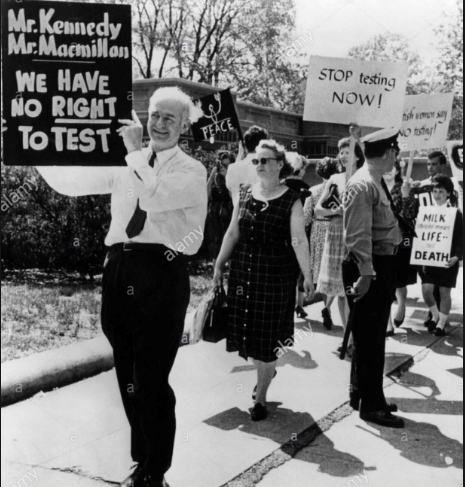 Linus Pauling Marching Against Nuclear Weapon Testingscarc.library.oregonstate.edu          A humanitarian is a human who is selfless and promotes human welfare and social reform. Linus Pauling exhibited selflessness when he joined protests against the creation of nuclear weapons, signed petitions, and held speeches for world peace. Linus Pauling fought for every life he could help, but the government was more concerned about war and wasn't thinking about the people. “Pauling challenged the U.S. government, arguing that the health consequences of radioactive fallout from the atomic bomb were far greater than the government acknowledged. Although the government argued that the increase of background radiation from nuclear bombs had only a small chance of affecting an individual, Pauling looked at the effect on the entire population. He argued if 1.5 million birth defects were caused each year by background radiation, a 1% increase would mean 15,000 more babies born with birth defects every year” (Hager). Pauling held speeches protesting what the government was testing and how it could affect people around the globe. “He joined a group co-founded by Albert Einstein called the Emergency Committee of Atomic Scientists and began to speak publicly about the potential dangers of nuclear war.” (Linus Pauling Biography) Pauling cared about the minimal 1% of people who could be affected by the government testing nuclear weapons. After Linus Pauling won the Nobel Peace Prize, he was viewed as a different person. “Pauling put his elevated new position as a Nobel Prize laureate to good effect in his growing social activism. He maintained, using scientific data and statistics to make his points, that radioactive fallout would increase the incidence of cancer and genetic disorders, including birth defects" (Marinacci). Pauling used his new followers to help him protest and try to end the experimentation and production of nuclear weapons. Unfortunately for Pauling, the government also looked at people that were possible threats to the government and could be anti-communists. “During the infamous McCarthy era in the early 1950s, Pauling was treated almost as a traitor. Despite his past patriotism, for several years he was denied a passport to travel abroad to scientific conferences. The State Department's reason stated: 'Not in the best interests of the United States...’” (Marinacci). The government thought Pauling was a threat to the U.S, due to his protests and speeches against nuclear weapons. He was not allowed to leave the United States because they denied his passport, but that didn't stop Pauling from continuing to protest. “... Only in 1954, when Pauling received the Nobel Prize in Chemistry, was an unrestricted passport reinstated” (Marinacci). While Pauling was protesting and studying biochemical sciences, he never bothered to receive his high school diploma. “High school graduation had to wait—and wait! Because of a technicality, Pauling did not receive his high school diploma until 1962, long after he had received his bachelor’s degree, doctorate degree, many honorary degrees from around the globe, and a Nobel prize” (Hager). Pauling never thought of receiving his diploma, as he traveled the U.S. earning awards and other degrees until he was reinstated a passport. A recognized worldwide chemist, educator, humanitarian, and political activist, Pauling faced many roadblocks, such as the government revoking his passport, and not being listened to, but that never stopped him from achieving his goals or fighting for what is right.

Universally renowned nuclear physicist, teacher, humanitarian, political activist, and extraordinary chemist, Linus Pauling is known to be one of the greatest scientists the world has ever known. He fought the government against the human casualties nuclear weapons were causing, and traveled the world to make discoveries in quantum mechanics and chemical bonds. His experiments and selflessness helped him earn the only two unshared Nobel prizes ever. Linus Pauling was awarded the 1954 Nobel Prize for Chemistry “for his research into the nature of the chemical bond and its application to the elucidation of the structure of complex substances” (Linus Pauling Biography). “He was awarded another Nobel in 1962, for peace, for his crusade to stop the atmospheric testing of nuclear weapons; it was awarded on October 10, 1963, the date that the Nuclear Test Ban Treaty went into effect” (Linus Pauling Biography). Linus Pauling was an inspiration to me because of the hard work that he put into everything. He studied science and chemistry for many years and always put in admirable effort. When he moved on to helping others and participating in protests, he stuck with his gut and pushed for what he thought was right. “...Pauling was not only a prolific scientist, but also an activist. He was one of the first scientists to speak out against nuclear weapons and war…” (Rose) Pauling's long and productive life spanned almost the entire 20th century (Rose). His amazing speeches against nuclear weapons inspired others to protest with him, and his amazing scientific discoveries encourage young people to be like him when they’re older. Linus Pauling was not only a humanitarian, experimentalist, and two time Nobel prize winner, he is also my hero.

Linus Pauling, Scientist and Peacemaker, a collection of essays by Pauling and others, edited by Clifford Mead and Thomas Hager, OSU Press, Corvallis, OR

Books to check out!

General Chemistry by Linus Pauling. His book explained everything he studied about chemistry.

The Nature of the Chemical Bond by Linus Pauling. The first book to truly explain everything we know about Chemical bonds and their structure.