Looking for hope amid the heartbreak of another school shooting 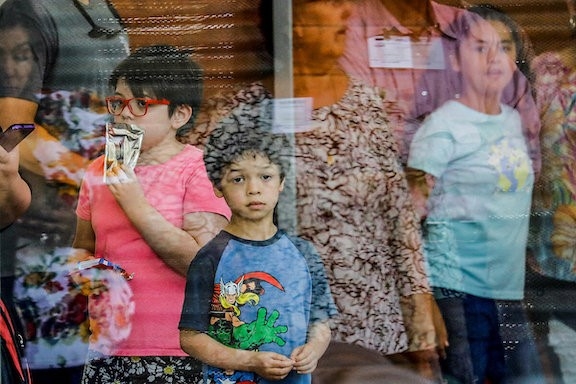 A child looks on through a glass window from inside the SSGT Willie de Leon Civic Center, where students had been transported from Robb Elementary School after a shooting, in Uvalde, Texas, May 24, 2022. Marco Bello/Reuters

These are a few of the horrifically infamous examples of gun violence in American schools over the past two decades. Statistics tell us that such mass shootings are a tiny but tragic part of a much larger problem. But knowing that doesn’t make the deaths of innocent children any less painful. And so far, it’s done little to untangle America’s unique Gordian knot of gun rights, freedom, and security.

Seeing the arc of horror to apathy repeatedly play out is deeply discouraging. As citizens and editors we struggle with how to get from heartbreak to a sense of credible hope.

David Hogg’s response caught my attention this morning. A survivor of the 2018 Parkland shooting, he’s emerged as a prominent voice against gun violence. And somehow, in an NPR interview Wednesday, he sounded confident of progress.

“We as Americans – Democrats, Republicans, gun owners, and non gun owners – we’ve been debating this for decades. … We know what we don’t agree on. Let’s focus on what we can agree on – even if it’s tiny,” says Mr. Hogg. “Even if it saves just one life, we need to figure out what we can get Senate Republicans to agree on.”

Nationally, in Congress, there’s been little or no agreement on how to protect children from mass shootings. But in 2018, Mr. Hogg and other Parkland survivors successfully lobbied Florida Republican lawmakers to pass a “red flag” law – a court order to temporarily  remove firearms from people who are potentially dangerous to others or themselves. Expect a Monitor story about red flag laws later this week.

And therein lies some hope. At the state and local level, communities are responding. The Sandy Hook Promise, for example, is a nonprofit program that has taught nearly 15 million students and teachers how to “know the signs” – identify at-risk behavior and seek help. Expect a Monitor story on that effort, too.

Until American voters choose leaders who are willing to make difficult changes nationally, the effort to solve this fatal problem appears likely to be led by parents, local officials, and communities.