Louis Pasteur - The Father of Microbiology

Science knows no country, because knowledge belongs to humanity, and is the torch which illuminates the world.  - Louis Pasteur 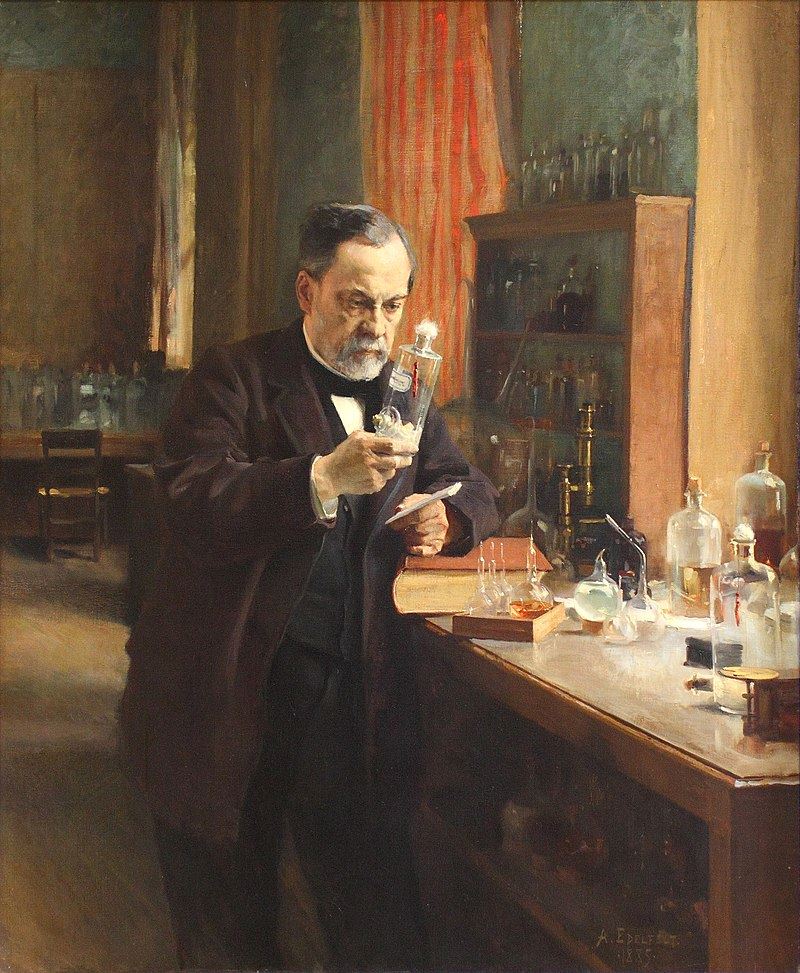 Louis Pasteur in his laboratory, surrounded by his apparatus that he used to conduct experiments.https://en.wikipedia.org/wiki/Louis_Pasteur“True heroism is remarkably sober, very undramatic. It is not the urge to surpass all others at whatever cost, but the urge to serve others at whatever cost” (Ashe). As affirmed by Ashe, heroes are individuals who instigate dedication in themselves to serve others—despite the consequences that may arise. They are driven to undertake risks for the selfless well-being of others, and thus epitomize the apex of altruism. Heroes are momentous figures worthy of admiration and recognition as reflected in society’s need for them. In modern society, heroism can be found everywhere—feats ranging from saving a child from harm to standing up for a peer all exhibit heroism. These acts, which range in notability, have at least one thing in common: they involve the realization that using one’s aptitude to fulfill the needs of others is what promotes a positive and well-functioning society. Only certain individuals, however, can manifest heroism to a degree that deserves international recognition. Truly heroic individuals exemplify compassion, tenacity, and humbleness in their crusades for the betterment of society. When presented with adversity, they persevere in their endeavors, and thus serve as an inspiration for others. These individuals have a restless compulsion to utilize their unselfish expertise in their distinct fields to evolve the world for the benefit of others—even when faced with criticism and obstacles.

One individual who tenaciously harnessed his aptitude to aid others, even during harsh times, is Louis Pasteur. Pasteur was a French chemist, microbiologist, innovator, and scientist born on December 27, 1822 in the small commune of Dole, France. When he was an adolescent, Pasteur developed an ardent ambition to pursue a teaching career. He longed to attend a prestigious teaching school known as Ecole Normale Superieure. To gain admission, Pasteur had to visit Paris and study, so he opted to attend the University of Sorbonne. He eventually felt homesick and returned home. Nevertheless, he never lost sight of his aspirations and several years later, Pasteur returned and attended College Saint-Louis. One day at college, he attended a lecture given by France’s first chemist, Jean Baptiste Dumas. After hearing Dumas’ lecture, Pasteur felt compelled to succeed in science. Later that year, Pasteur passed the entrance exam and entered his dream school, Ecole Normale Superieure, where he studied to instruct chemistry and physics. As a young adult in his studies, Pasteur was exceedingly fascinated about chemistry; he often took on challenges that seemed impossible to conquer. He first gained international fame at the age of twenty-seven when he discovered isomerism, the existence of compounds having similar molecular formulas but different structural arrangements and thus different properties, and uncovered the secrets behind fermentation. Throughout his life, Pasteur contributed to the world of chemistry and biology in a plethora of ways, which earned him the title as the “father of microbiology.” He expanded the forefront of science, and in doing so, not only revolutionized the field, but also improved the health of others. Despite facing many tribulations during his ventures, Pasteur persevered with sheer determination. Through his compassionate use of his intelligence to improve the well-being of humanity and his tenacity to overcome obstacles and opposition, Louis Pasteur manifests the essence of a hero worthy of recognition and admiration.

Instead of dedicating his life to research alone, Pasteur compassionately used his intelligence to better the lives of the people around him. Despite not possessing a medical degree, Pasteur took interest in the medical field and applied his chemistry background to contribute to the field: “On the way to performing his experiment Pasteur had also invented what has come to be known as sterile technique, boiling or heating of instruments and food to prevent the proliferation of microorganisms...After seeing what military hospitals were like during the Franco-Prussian War, Pasteur impressed upon physicians that they should boil and sterilize their instruments” (B. Lerner and K. Lerner). One of Pasteur’s acclaimed inventions was the sterile technique, which is still practiced to this day. Like many scientists, Pasteur was perpetually fabricating and evaluating new discoveries. When Pasteur conceived sterilization, however, he did not just apprise others about his innovation—instead, he urged physicians to adopt the practice because he knew it would diminish the risk of infection, and thus preserve lives. Pasteur expressed compassion toward others by utilizing his knowledge to ensure hospitals maintained healthier environments for the safety of patients and doctors. Pasteur could have elected to only publish his findings, but he opted to do more than that. His selfless and compassionate actions epitomize the nature of true heroes. Furthermore, Pasteur’s utilization of his expertise to save the prominent silk industry demonstrates his compassionate aspirations: “Shifting focus, in 1865, Pasteur helped save the silk industry. He proved that microbes were attacking healthy silkworm eggs, causing an unknown disease...He eventually developed a method to prevent their contamination and it was soon used by silk producers throughout the world” (Biography.com). Pasteur undertook the challenge of investigating the possible collapse of the silk industry in France. He sacrificed his time and effort to not only conduct research, but also to cultivate a method to put an end to the culprit. The silk industry had no connection to Pasteur as he was a scientist, however, in spite of this remoteness, he selflessly provided his expertise in chemistry and biology to try and save the industry because he knew others depended on it. Pasteur’s efforts to save the silk industry display his compassionate nature to work for the benefit of others and not for himself. His influence on the silk industry demonstrates his work affected others on a worldwide level, which proves he is deserving of the title as a hero. Pasteur altruistically employed his intelligence to aid the lives of others, and thus is a truly heroic figure.

Despite facing obstacles and opposition, Pasteur was able to overcome them through arduous determination and persistence, and thus cleared the way for his outstanding contributions to the world to come. Although Pasteur was rewarded for his pivotal contributions, he did not live an ideal life; Pasteur's scientific achievements coincided with personal tragedies: “In 1865 his father died; his two daughters were lost to typhoid fever in 1866. Over-worked and grief-stricken, Pasteur suffered a cerebral hemorrhage in 1868 which left part of his left arm and leg permanently paralyzed. Nonetheless, he pressed on, hardly with interruptions, on his study of silkworm diseases…” (Encyclopedia of World Biography). Losing multiple family members is not an easy ordeal to move on from. Pasteur’s situation was even worse because he himself suffered brain damage. In spite of these calamities, Pasteur pursued his ambitions of science and never abandoned his goals. Even though he risked future brain damage, Pasteur persisted in his work and remained steadfast with his aspirations. He relentlessly pursued them because he knew his work would someday conquer disease. Through his determination to make a global impact and his persistence to continue his work despite tragic obstacles, Pasteur concretizes the concept of an ideal hero. In addition to personal tribulations, Pasteur also faced criticism from other scientists. One such critic was Robert Koch, who claimed that Pasteur’s work on vaccines was fake and unoriginal. In a letter detailed to Robert Koch, Pasteur responded with: “As of now, the results of a first year of application are considerable enough that the critics and the contradictions have not been able to stop the progression of [vaccine’s] development. As violent as your attacks might have been, sir, they will not prevent its success. I also await with confidence the results that this method of reduction of viruses holds in reserve to help humanity in its fight against the diseases that lay siege to it” (Pasteur). Although Koch attacked Pasteur, criticizing him that his work was flawed and old, Pasteur persevered and unwaveringly pursued his research. Public backlash from people like Koch are often reasons why individuals abandon their hopes and dreams. Pasteur did no such thing; he looked toward the success and impact his work would have on humanity, and used that as the driving force for his determination to continue his work. His “critics and the contradictions” they had were no match for Pasteur’s sheer determination and persistence, which he utilized in a manner akin to true heroes. By committing to his work, despite facing adversity, Pasteur exhibits qualities typical of heroes.

Pasteur establishes himself as an admirable hero as demonstrated by his selfless utilization of his intelligence to promote the health of others and his persistence to conquer obstacles and resist opposition. He exercised his knowledge not just for the advancement of science, but also for the well-being of others. His impact on sterilization and the silk industry are still prominent today. Pasteur dedicated his time to serving others, even in the rough times when he lost his dearest family members and suffered brain damage. Undeterred by his tragedies, Pasteur persevered, and thus serves as an inspiration for others. As illustrated by his actions, Pasteur represents the ideal hero society longs for. It is said that when Pasteur died, his final words were: “One must work; one must work. I have done what I could” (Encyclopedia of World Biography). Indeed, Pasteur did what he could, because he left a legacy that was incredibly impactful. He was a passionate believer in the correlation between hard work and success. His relentless working habits encourage me to live up to my dreams, because I understand that with hard work, I will achieve them like Pasteur achieved his. The field of science has always intrigued me, and Pasteur’s life only enhances that perception of mine. I feel inspired and motivated by Pasteur’s doings to work for the benefit of humanity like he did. I hope to pursue a medical career so that I will have the chance to selflessly aid others in any way possible. Pasteur’s efforts enlightened upon me that success requires dedication, commitment, and a passion to overcome obstacles. Pasteur was a remarkable individual who strived to serve others. He did not have an urge to surpass others with his intelligence, but rather an urge to utilize it to serve the people around him. In the eyes of Ashe and the world as a whole, Pasteur’s ambitions are what make him an ideal hero, for he epitomizes the pinnacle of altruism and teaches others to exhibit the trait as well—for the advancement of society.