by Marcus Fennema from Fredericksburg, Virginia in United States 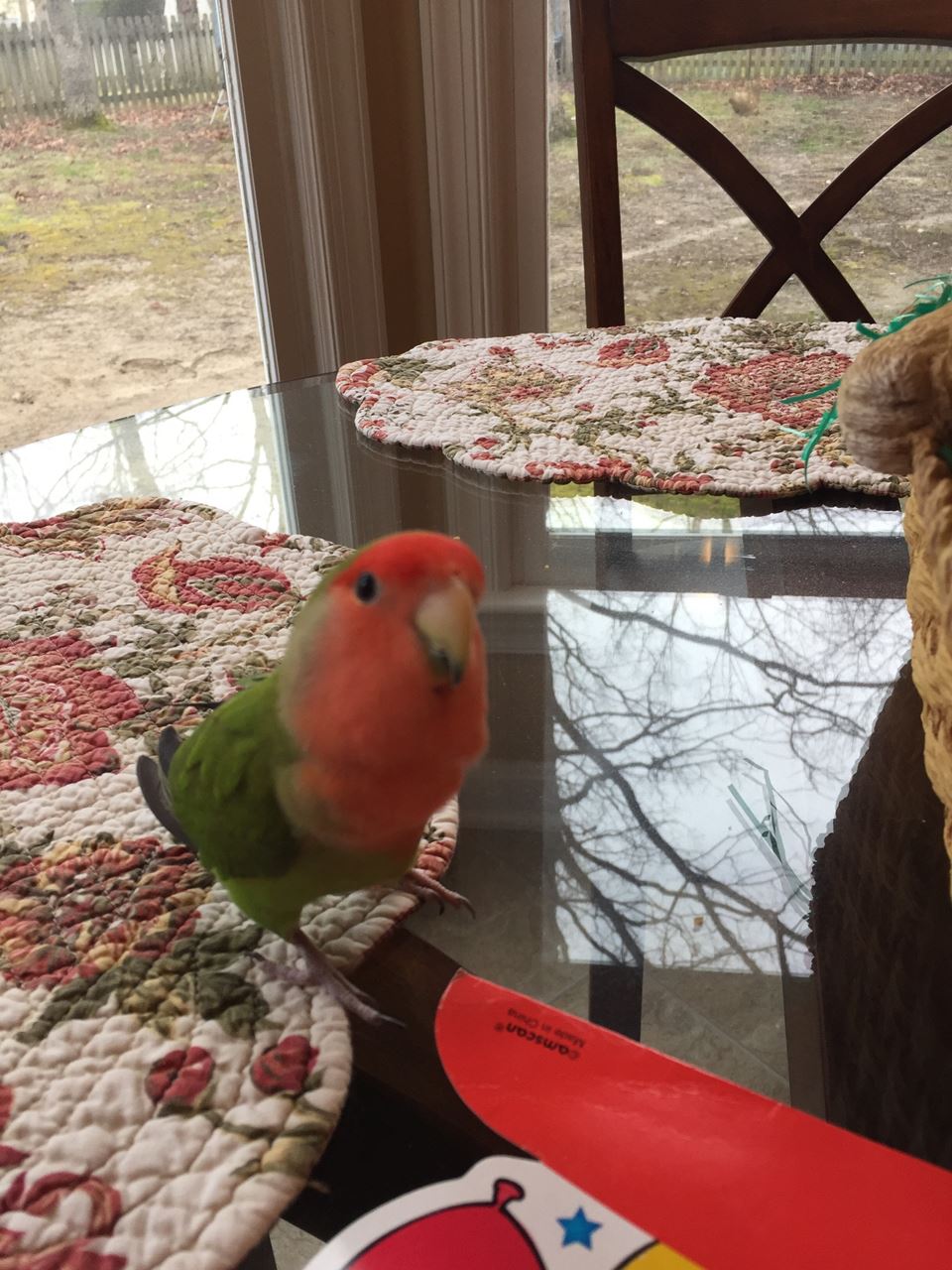 Lovey on the kitchen table(Fennema)

It was during a day in summer camp that a little bird wandered past the school doors, held open by a wooden block. Had it not been there and the door not propped open, I would have never met the little lovebird who would come to be called Lovey. His presence in the building caused a ruckus, and it was when the camp staff managed to capture this bird in a plastic container that I first saw him, when everyone began to crowd around the box, infatuated with the odd visitor and perplexed as to where he had come from. It was after the head of the summer camp went to a conveniently nearby parrot store that more of the bird's story was revealed.

A kind woman, Ann Hopwood, who owned the parrot shop, had seen the bird before. In fact, maybe some hours prior, she had noticed the same bird flying around outside. Unsure if it was one of theirs, she held out her hand, onto which the bird then landed, only to again take off after he did not recognize the woman who was holding him. It was then that she noticed a hawk trailing the little bird and believed him to be a goner. So it was to her utmost amazement that our camp director came in the next day with questions about that very same bird. 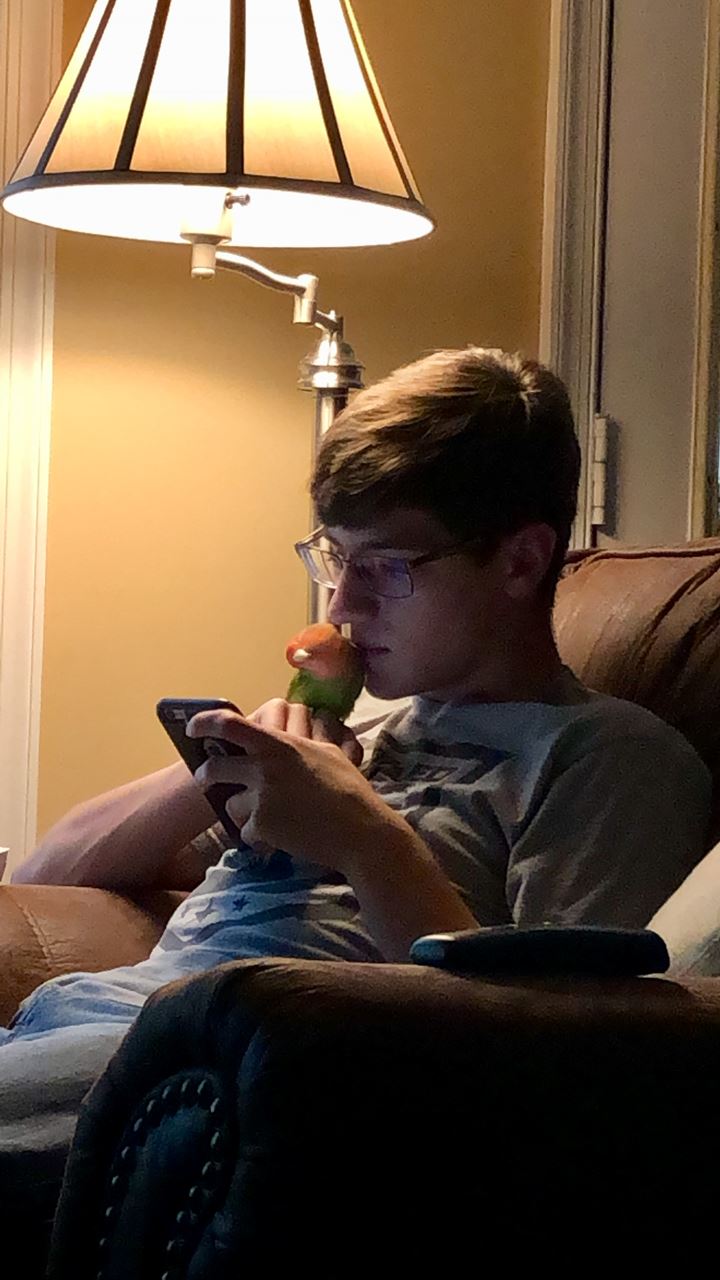 Lovey and me on the couch (Fennema)

A few days later, the bird, Lovey, gave me his first "gift." He had grabbed my attention, more so than anyone else's, so I went to see him every day--but there was a catch. To go into the room where his cage was set up, I had to be calm and quiet. See, it was during the previous school year that I was diagnosed with Autism and ADHD, and we were still figuring out what medication worked best for me. Consequently, I wasn't as "in control" and was typically very hyperactive. However, because I had to be as calm as I could to see Lovey, I would continue to be much calmer for the rest of the day. This little bird played a role in helping me cope with my disorder, and my parents noticed it. They saw a very special connection between Lovey and me, and knew they needed to keep us together. The camp director wouldn't be able to take him in after the end of the summer and the "missing" signs that the school had put up received no reply, so it was decided that I would take Lovey home after summer camp was over. 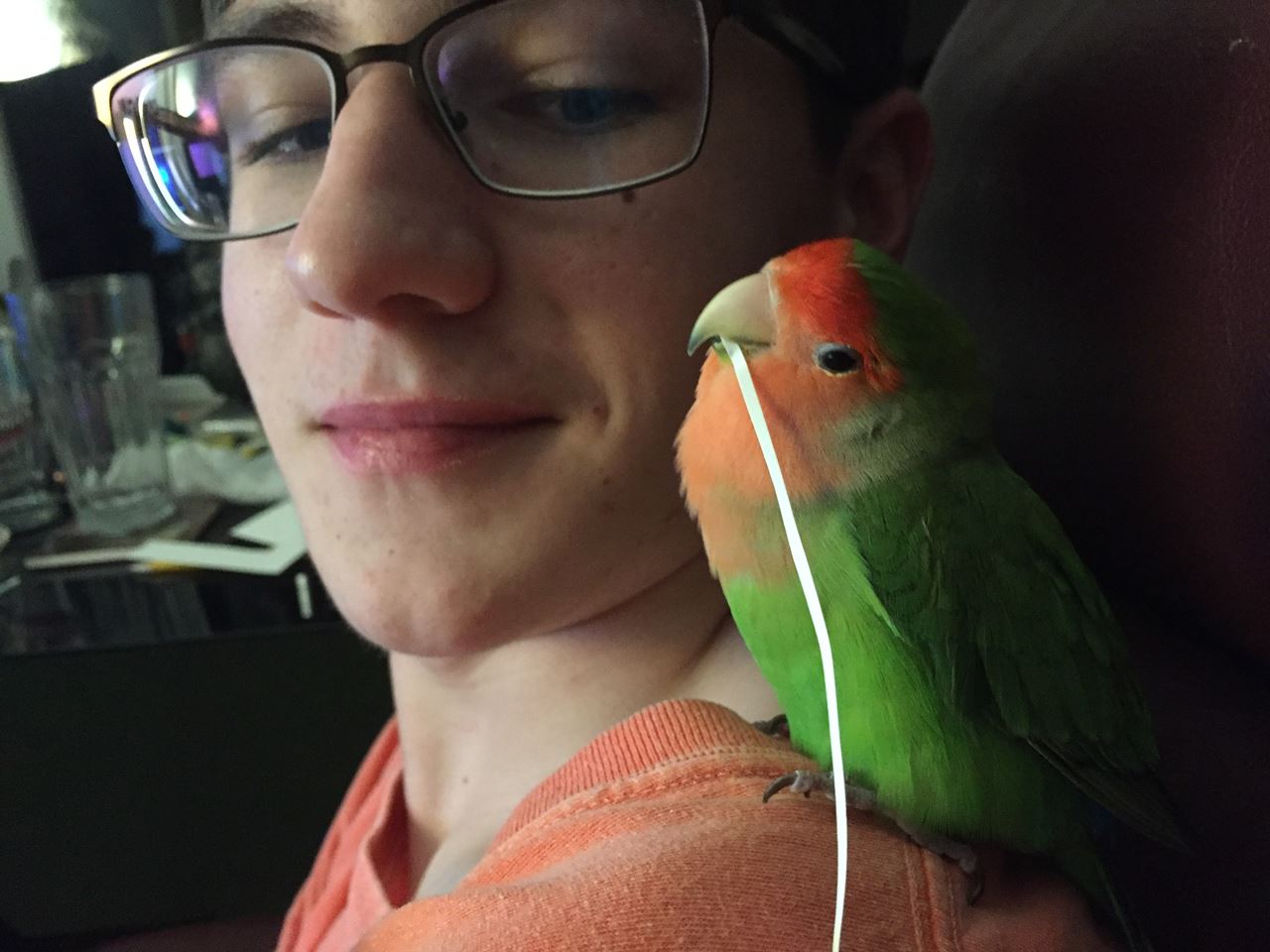 Lovey with paper(Fennema)After taking him home, Lovey continued to calm me down and he never stopped providing such a therapy for me. Much later in my life, when I had begun eleventh grade, school had suddenly become much more rigorous and I was often stressed out. As he had always done, Lovey was able to relieve some of that tension as he sat on my shoulder while I worked through the various school assignments. Such a minimal thing did so much for me, and it wasn't the only thing that Lovey helped me with. At a time when I struggled to read, an issue stemming from dyslexia, something else I had been diagnosed with, Lovey was someone to whom I could read, which in turn encouraged me to read, an activity I otherwise despised. Because Lovey gave me the opportunity to read, it allowed me to grasp concepts that I didn't completely understand. But reading was one of several things that I learned through my relationship with Lovey.

Children with autism often struggle to form meaningful connections with other people, particularly in terms of friendship, due in part to the disorder causing them to have a difficult time in adequately comprehending social cues (LaGasse). I was no exception to this, but I began to build an incredibly close connection with Lovey. In time, I had developed such an intimate understanding of Lovey to a point where I could recognize certain gestures or chirps as an indication that he needed something or what mood he was in. That connection likely gave me some basic understanding of social interactions that I hadn't been aware of beforehand, but it also kicked off my fascination with birds.

Lovey's lasting impact harkens back to the beginning of his story. Through meeting Lovey, I met Ann Hopwood, the woman who had first seen him flying from a hawk. The parrot shop she owned only served to foster my interest in birds. When I began to train Kiwi, my other parrot, she was wholly willing to teach me about it. Ms. Hopwood also gave me opportunities to do things the regular customer couldn't: I held a green aracari toucan, I was shown how to groom and bathe a parrot, I fed watermelon to a green-cheeked parakeet, and I saw the hatchlings of a pair of cockatiels. All of it made me love birds more and I would've never had the chance to experience any of it had Lovey not been a part of my life. 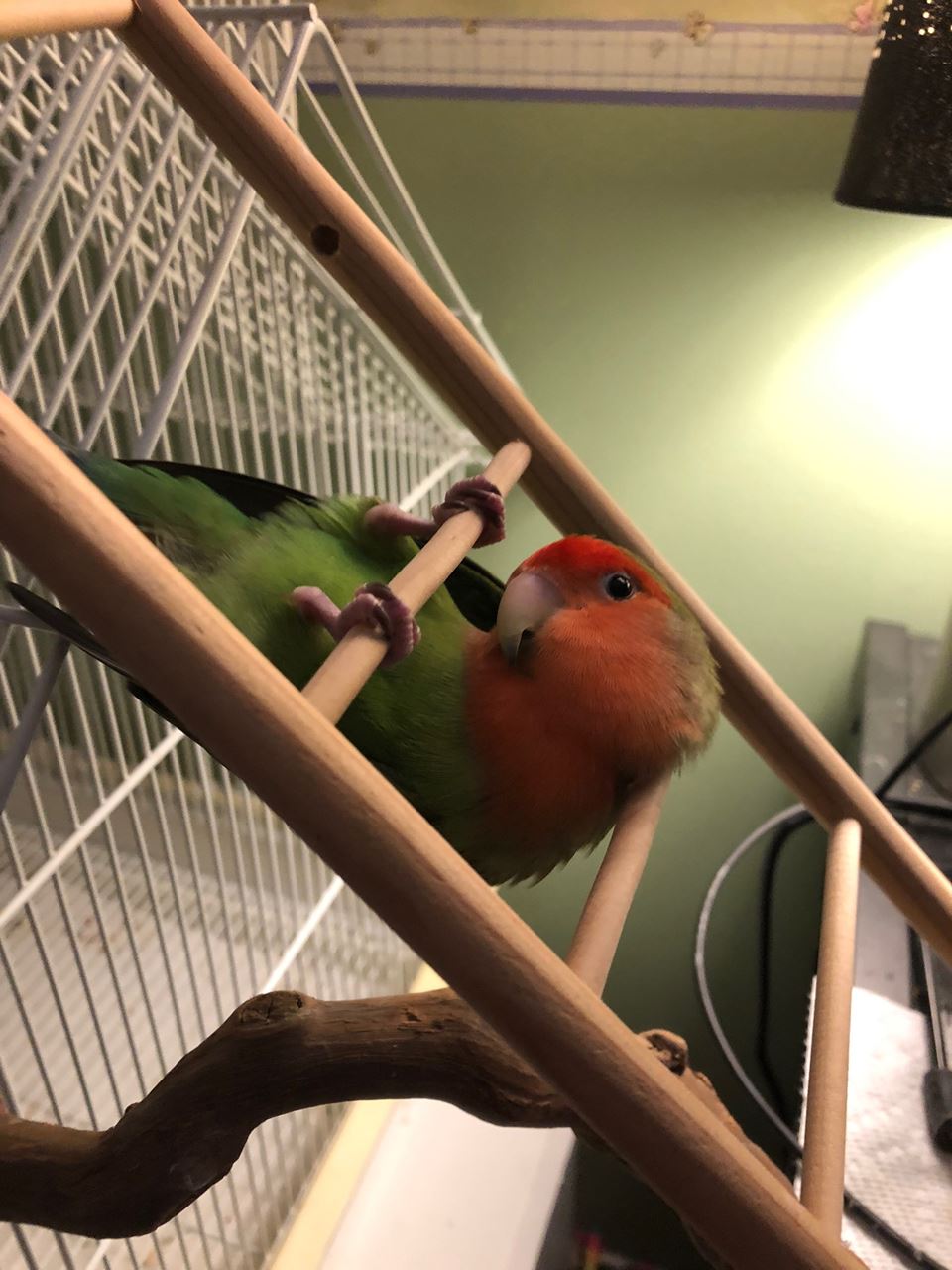 Lovey hanging on his ladder (Fennema) It's in this way that Lovey is a hero to me: for all that he helped me with and all that he helped me get through, and for all of the opportunities he gave me. He helped me cope with autism, with dyslexia, he taught me important skills, and above all else his love was unconditional. There's no way to justly express how important he was to me. But even with everything Lovey did for me, all that he asked in return was to sit quietly on my shoulder.