by Chris from Collegeville 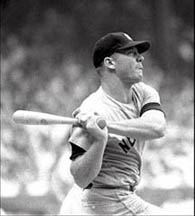 Mickey Mantle was a great inspiration for me to start playing baseball. He was the greatest baseball player I had ever seen. He and his teammates led the Yankees to win several championships. If it wasn’t for him, I might not have gotten involved with baseball. I know Mickey was way before my time but, when he swung that bat, it was just marvelous to see where the ball went. I have never seen actual games of him, but I saw clips of just how impressive he actually was.

Mickey was elected into the Baseball Hall of Fame, located in Cooperstown, New York, in 1974 receiving 322 of the 365 ballots. That is, 88.22% of the BBWAA who elected Mickey into the Hall of Fame.

Mickey Mantle inspired me so much as a hero, I took his number seven jersey and adopted the number as my own baseball number. Mickey Mantle will forever be a top hero in my life. There was no baseball player like him. No one can match up to what he accomplished. He was just simply great at the game.