by Kayley Vu from San Diego, California in United States

The Beginning of Malala Yousafzai

“A hero is an ordinary individual who finds the strength to persevere and endure in spite of overwhelming obstacles” (Christopher Reeve). Truly, heroes are human beings who sacrifice their own safety to help out for the common good. From hundreds of years ago, heroism has been showcased and implanted into our human beliefs. Because our shift in how we see heroes has changed, people like celebrities and well-known people based on something they did are dominating our standards for what a hero is really like today. However, there are people in this world who do random acts of kindness just because that’s who they are, and there are also people in this world who will do selfless acts in today’s society with no expectation of getting anything in return. Now, those are the true heroes in our world today--the ones who can make a difference with a small selfless act. They distinguish themselves from the average human being in our humankind with just the sheer capability of creating a forever impact on this world. Through bravery, determination, and passion, Malala Yousafzai has shown us that she has gone through the worst hardships possible but still comes out to change our world for the better. 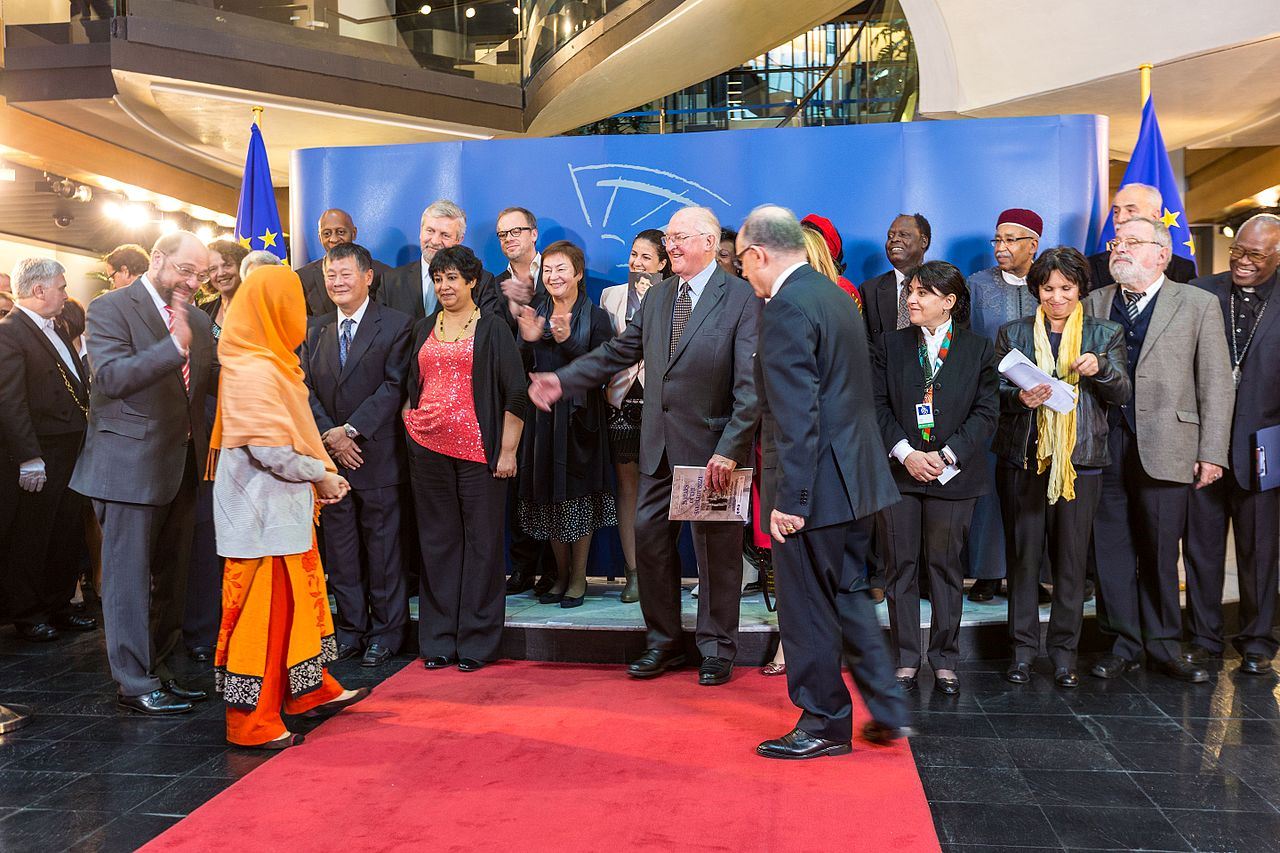 Malala meeting some very important peoplehttps://commons.wikimedia.org/w/index.php?search=malala+yousafzai&title=Special%3ASearch&go=Go&ns0=1&ns6=1&ns12=1&ns14=1&ns100=1&ns106=1#/media/File:Photo_de_famille_lors_de_la_remise_du_25e_prix_Sakharov_à_Malala_Yousafzai_Strasbourg_20_novembre_2013_02.jpgMalala Yousafzai is one in a million who displays the role of determination, bravery, and passion. Born on July 12 of 1997 as a daughter in the Swat Valley of northern Pakistan, she was a girl hidden away from the perspective that she was more than just a person in the family who would wash clothes and cook food. Living in a country where women’s voices are silenced, Malala ignored that stereotype and made sure to use her voice to the best capabilities it would lead her. Her activism work led her to write her very own memoir, I am Malala, which tells readers the story of all her ups and downs of the incredible journey. Because Malala’s work was so inspiring, she received the Nobel Peace Prize in 2014 and was recognized as the youngest recipient of such a prestigious award. Malala used her passion for helping girls have an education to produce a fund where an organization invests in having free education for girls. Heroes are ones who do everything in their power to enhance and better our world, and that is what Malala Yousafzai and her passionate and determined self did to pursue her dream of being an advocate for girls' educational rights.

Malala is known for a lot of things, but one characteristic that stands out for her is determination. Once Malala puts her mind to something to accomplish, she won’t back down until she achieves her goal. In her self-written book, I Am Malala, she states, “My mother was worried about me, but the Taliban had never come for a girl and I was more concerned they would target my father as he was always speaking against them” (Yousafzai pg. 4). Even though her dad and herself were being targeted by the Taliban, a brutal fundamentalist religious group that held power over most of Afghanistan starting in the 1990s, she wasn’t scared because “the Taliban have never come for a small girl” (Yousafzai pg. 5). With her determination to stay in school and soon to be a school activist for girls' educational rights, she wasn’t aware of how powerful the Taliban can be; she was being threatened without her knowledge. Even after Malala was shot and transported to Birmingham, England, never for even a second did she give up fighting for her life. During the recovery of her major surgery, she wasn’t able to talk right away because of how the bullet was lodged in her face when she had arrived at the hospital. She wasn’t able to communicate to her family, asking what had happened or any other questions like why were she there. Because her memory wasn’t clear, her father, Ziauddin Yousafzai, sat by her bedside filling her up to date about the incident she had been in. The only way she could communicate to her family was through paper and pen, the first couple things she had written were, “When will my father come? We don’t have a lot of money. Who did this to me? What happened to me?” (Yousafzai pg. 278). Her speech skills were still developing to the fullest, so her “letters still scrambled” (Yousafzai pg. 278). Malala went through one of the most painful incidents and it was a huge challenge for her to fight through something like that, but even going through a hard challenge like that, she rose, overcame, and clearly showed that she depicts the true determined definition of a hero.

Malala’s bravery is one of the most inspiring things in the world today. Even in the darkest times, she has shown through bravery, nothing can bring you down. In the first couple pages of her self-written book, "I Am Malala," she states, “I wasn’t scared, but I had started making sure the gate was locked at night and asking God what happens when you die.” Even though Malala knew she was being targeted by the Taliban because of what she and her father were doing by becoming school education activists, she had stated that she still was not scared. She was being threatened because of her relation to her father who owned a school. In their society, girls having the chance to have an education was looked down on, but because Malala’s father had enrolled her in his own school, the Taliban were not happy, therefore threatening Malala and her family. In Ziauddin’s Ted talk, he explains, “She (his wife) abruptly told me, 'Please don’t blame yourself. You stood for the right cause. You put your life at stake for the cause of truth, for the cause of peace, and for the cause of education, and your daughter is inspired from you and she joined you.'" (Yousafzai 14:00 to 14:18). Even though Malala was hurt because of following the footsteps in what her dad did, she was brave enough to stay by his side through it all. Malala’s father was such a big impact on her that she soon realized that his beliefs were the same as hers. In the same interview, Malala replies to a question: 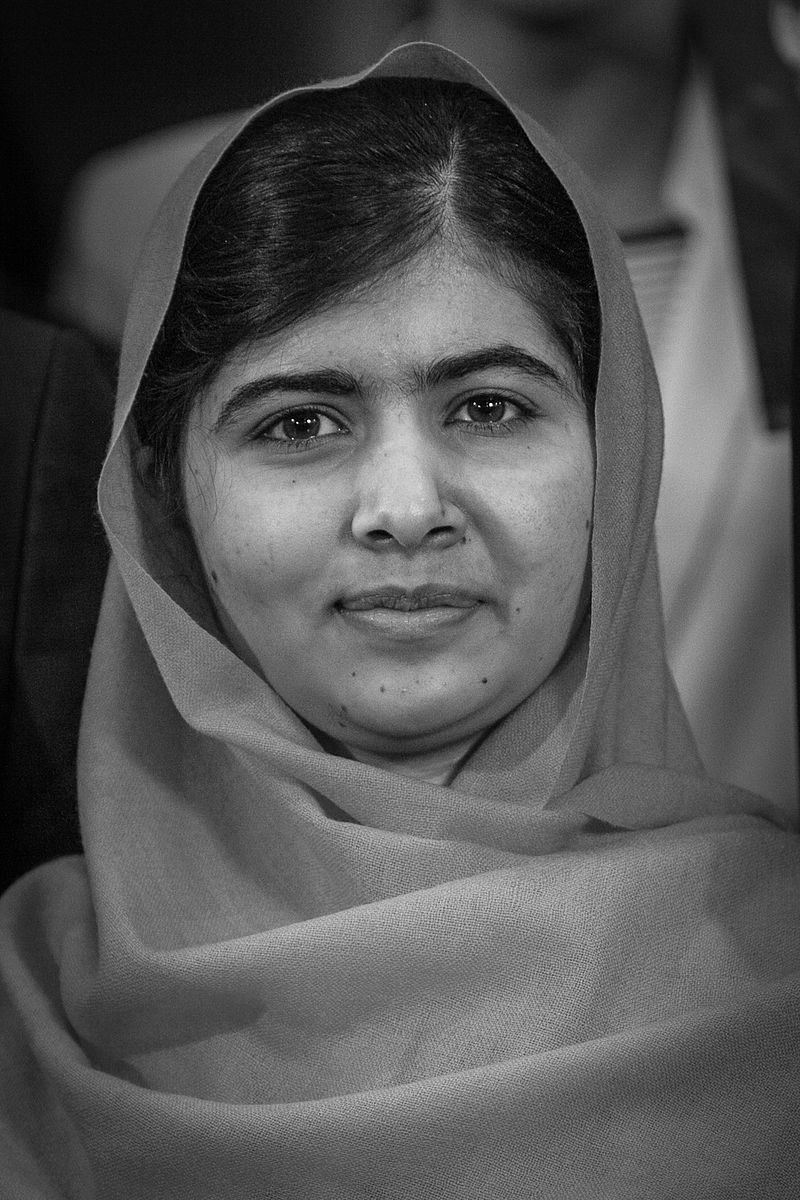 She's never afraid of anything that'll come her wayhttps://commons.wikimedia.org/w/index.php?search=malala+yousafzai&title=Special%3ASearch&go=Go&ns0=1&ns6=1&ns12=1&ns14=1&ns100=1&ns106=1#/media/File:Malala_Yousafzai_par_Claude_Truong-Ngoc_novembre_2013.jpg"I have already seen death, and I know that death is supporting me in my cause of education. Death does not want to kill me. Before this attack, I might have been a little bit afraid of how death would be. Now I'm not because I have experienced it. So they cannot make me stop to continue my campaign."

Malala survived the impossible. Shot in the face and lived. She showed that she isn’t scared of death and she won’t stop her campaign even if the Taliban will come back to target her again. Her driven thoughts only led her to one place, which was creating her very own campaign where all girls are allowed equal education rights, and she won’t stop because she’s being directed by dangerous men. Malala Yousafzai’s ability to show her dominance and stability demonstrates her strong determination as a hero. She already survived the unbelievable, so the question is: what can’t she do?

In Malala’s selfless youthfulness, she has shown great characteristics of hers, such as her passion towards many conflicted decisions she is faced to make. In the few couple pages in her self-written book, "I Am Malala," Malala shows a picture of her henna tattoo with a caption, “henna decorations of calculus and chemical formulae on Malala’s hand, instead of the traditional flowers and butterflies.” Based on this picture, you can see her true passion for education and school, as she has chemistry formulas instead of the traditional drawings on her hand. Her privilege to have that kind of knowledge only advanced her campaign, showing that all women and girls deserve that type of education. Her father, Ziauddin Yousafzai, admires his daughter very much, and it shows when he talks about her, saying the most inspiring things in a Ted talk: “at the age of 10, Malala stood, and she stood for the right of education” (Yousafzai 12:45 to 12:51). Even at the age of 10, she knew her passion was going to be someone who was going to change the world for better and fight for the rights of education. In an interview, Malala stated,

"He's a great father. And I am inspired by him because the work he was doing at that time when terrorism was spreading in Swat - it was really hard to speak at that time, and my father did. And I got inspired by him. And that's why I said that I would also speak up for my rights, and I'll also speak up for the rights for every girl to get an education and to go to school."

Malala was passionate about her father’s work as well as speaking up for the rights for girls' education who will be able to attend school. Malala Yousafzai will forever stand as a hero, inspiring me to fearlessly find my passion and not let anything or anyone stand in my way. 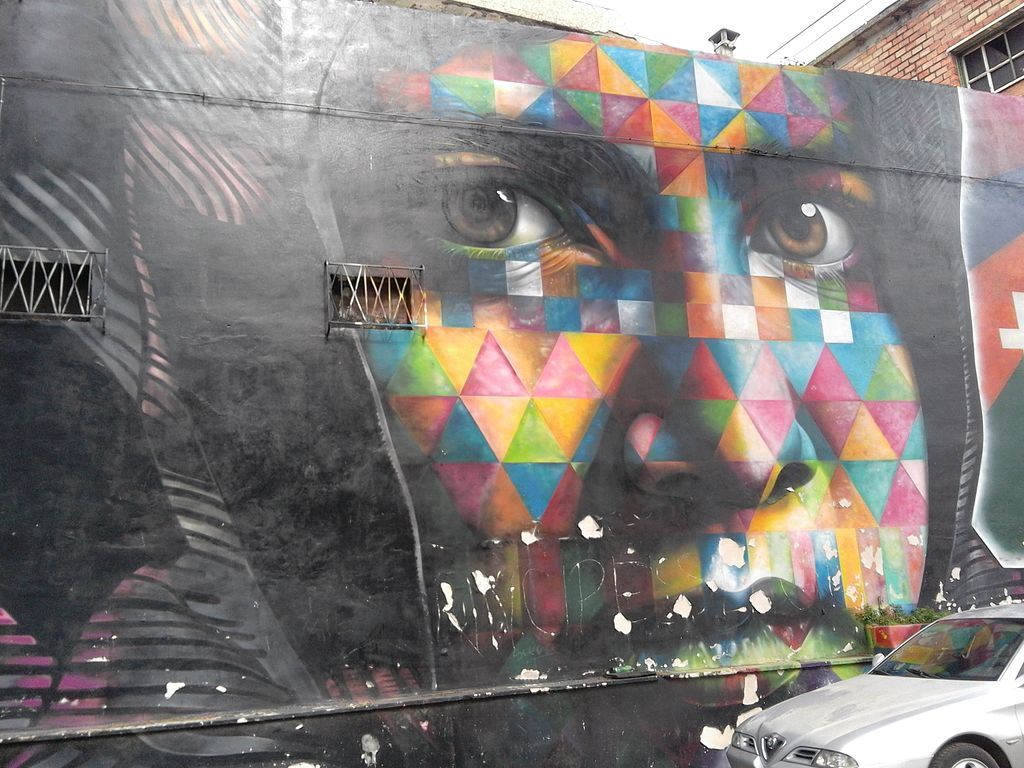 She inspired many others to do good to the world.https://commons.wikimedia.org/w/index.php?search=malala+yousafzai&title=Special%3ASearch&go=Go&ns0=1&ns6=1&ns12=1&ns14=1&ns100=1&ns106=1#/media/File:Murals_dedicated_to_Malala_Yousafzai_05.jpgHeroes are truly one in a million; they are good-hearted people who do many things beyond extraordinary without anything expected in return. They put their lives at stake trying to make a difference in today’s society of prejudice. As such, Malala Yousafzai’s invincible self has inspired thousands of people all over, from her home country to people across the world she has never met before. She has made an incredible imprint in today’s society, where we continue to fight against our wrongful prejudiced world. As a commendable hero who will forever be looked up to from today and future generations, Malala Yousafzai will go down in history as the most deserving hero there is.

My daughter, Malala - Malala's dad talks about what life was really like for her and her family. He talks about all the hardships and accomplishments Malala has done in the short years of her life, with many more to spend doing good things in the world.
I Am Malala pdf - It is Malala's memoir book which talks about what she went through and how she learned to move past it, creating a better environment for people to see others without judgment.