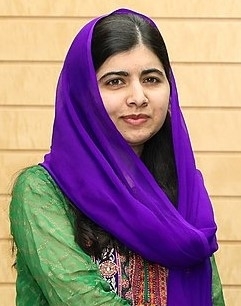 Malala Yousafzai"File:Shinzō Abe and Malala Yousafzai (1) Cropped.jpg" by 内閣官房内閣広報室 is marked with CC BY 4.0.
Malala Yousazfai is an incredibly brave person who uses her platform to speak up for the rights of girls’ education. Malala’s story became widespread after she was shot by the Taliban in the side of the head. People across the world were on the edge of their seats waiting to see if the girl who spoke up for her right to an education would wake up. Eventually she did, and she used this new publicity to spread awareness about the Taliban’s invasion of her hometown, and speak out about other injustices in women’s education around the world. Malala Yousafzai is a hero for many reasons, but in my eyes what truly makes her a hero is how she braved going to school, how she continued to fight when others wouldn’t have, and how she continues to speak up for others in need. 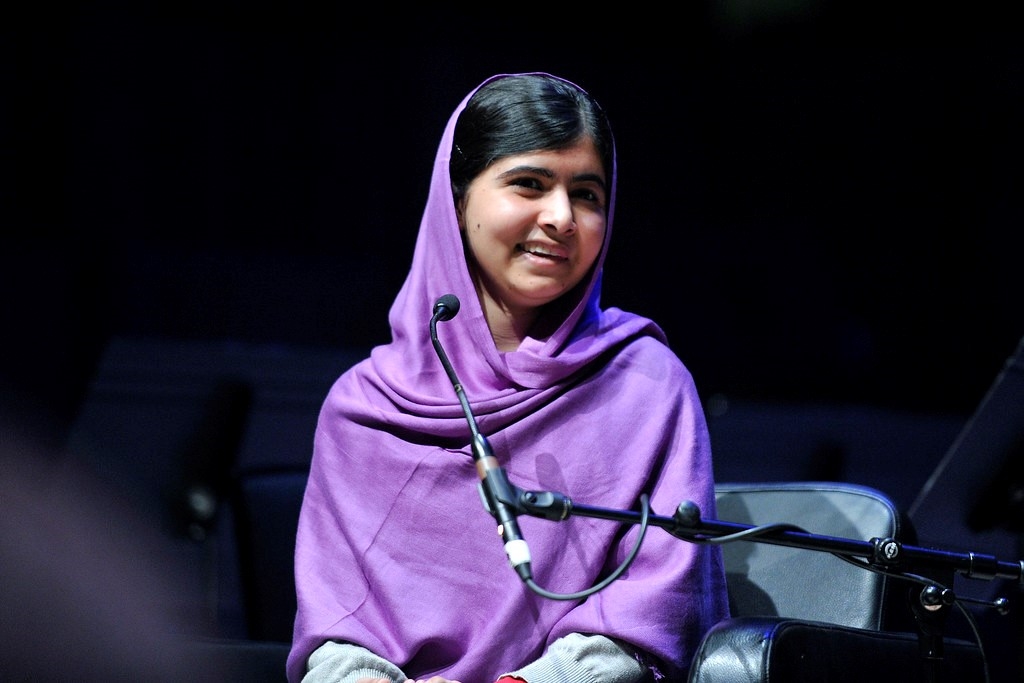 Malala Yousafzai"Malala Yousafzai" by Southbank Centre London is marked with CC BY 2.0.When Malala Yousafzai was eleven, the Taliban invaded her hometown of Mingora, Pakistan. The Taliban outlawed girls’ ability to attend school. However, going to school was one of her favorite things to do, so she continued to go. She advocated for her, and other girls’ right to go to school, despite the tension with the Taliban around her (Alexander). Yousafzai kept a blog which was entitled “Diary of a Pakistani Schoolgirl” on BBC. She blogged about her life with the Taliban invading, and the fear that surrounded her. “My friend came to me and said, 'for God's sake, answer me honestly, is our school going to be attacked by the Taleban?' During the morning assembly we were told not to wear colourful clothes as the Taleban would object to it,” (Yousafzai). In this section of her diary she describes how scared her and her friends were that the Taliban was going to attack their school. It evidenced through here as well that the school was taking precautions, attempting to ensure the safety of the students. In the entry just before this one she talks about how the school had taken away their uniforms, and had their students wear regular clothes. This would make them less likely targets because they were in normal dress, not affiliated with something illegal. Here they are placing further dress code policies that would make them even less of targets. They tried to make them appear as if they were following Taliban rule, though they were still attending school. This was incredibly brave of Malala Yousafzai to continue something that she loved doing, which was learning, even though the Taliban was outlawing it for girls. Her work in going to school paid off as well, as she ended up graduating from Oxford University in 2020, having studied Philosophy, Politics, and Economics (Yousafzai). This is one of the main reasons why I chose her as my hero, because I can’t imagine having to hide my going to school, and honestly if I was in a situation like this I probably wouldn’t be going to school. I admire her bravery in continuing to go to school, and on top of this advocating for her right to go. 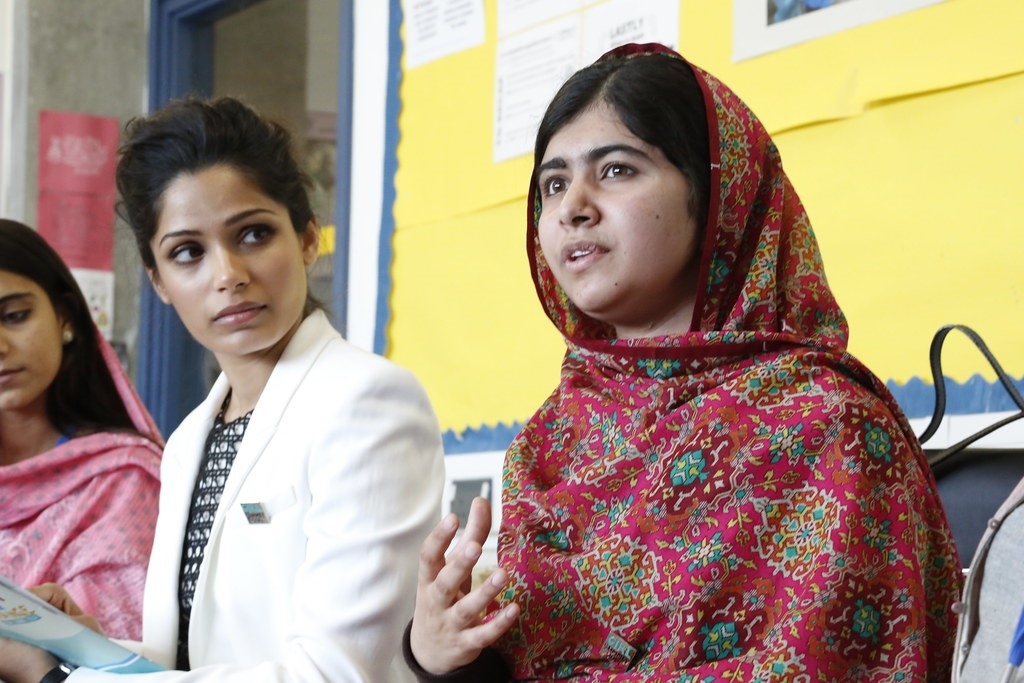 Malala Yousafzai"Freida Pinto and Malala Yousafzai" by DFID - UK Department for International Development is marked with CC BY-NC 2.0.On October 9, 2012, a fifteen year old Malala Yousafzai was on a school bus, making her way home after school. A masked shooter got onboard and was asking for her. After finding out where she was seated he shot at her three times, one hitting the left side of her head (Yousafzai). Needless to say, this was a traumatic experience for Yousafzai. After being shot she had to be airlifted to a Pakistani military hospital in Peshawar, before being transported to Birmingham, England (NobelPrize.org). She didn’t wake up until ten days after the incident, and had to be told by her doctors that she was attacked (Yousafzai). This really affected me because she was fifteen, which is my exact age, and I can’t imagine being shot, or someone I know being shot on the way home from school. Or even having to speak up for my ability to go to school. In the ten days after the shooting, her story had gained traction across the world, and she used this new publicity to speak out about her experiences with the Taliban. She brought awareness to her story, and what had been happening in Pakistan. She published her autobiography in 2013, the year after the shooting, it was called  “I am Malala: The Girl Who Stood Up for Education and Was Shot by the Taliban,” she was just sixteen (Alexander). The European Parliament then awarded her with the Sakharov Prize on October 10th of that same year for Freedom of Thought (NobelPrize.org). She used her platform to speak out, rather than drop back after what she had endured. She founded the Malala Fund, where she speaks out for education for girls. “After months of surgeries and rehabilitation, I joined my family in our new home in the U.K.It was then I knew I had a choice: I could live a quiet life or I could make the most of this new life I had been given. I determined to continue my fight until every girl could go to school. With my father, who has always been my ally and inspiration, I established Malala Fund, a charity dedicated to giving every girl an opportunity to achieve a future she chooses. In recognition of our work, I received the Nobel Peace Prize in December 2014 and became the youngest-ever Nobel laureate,” (Yousafzai). In this quote she explains how she felt that she needed to continue her fight. Her perseverance and advocacy are truly heroic traits, and I admire her much for them. 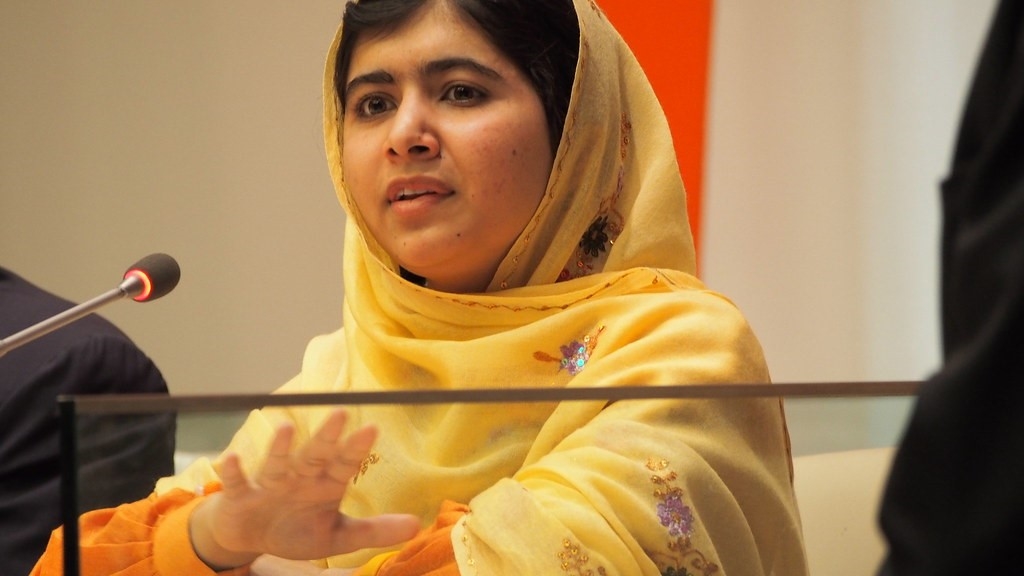 Malala Yousafzai"Malala Yousafzai, Youth advocate for Education, in New York" by Global Partnership for Education - GPE is marked with CC BY-NC-ND 2.0.Malala Yousafzai didn’t stop at standing up to the Taliban, she continued to advocate for girls’ right to education, and speaking up for children in need. She, with the help of her father, founded the Malala Fund, “Malala Fund’s Education Champion Network supports the work of educators and advocates and helps bolster girls’ secondary education around the world,” (malala.org). This quote from the front page of the Malala Fund’s website shows how she has used her platform to reach out, and help children from around the world. Also on the front page of the website, there are links and pictures to show places that they are supporting. These places include Afghanistan, Brazil, Ethiopia, India, Lebanon, Nigeria, Pakistan, and Turkey. Malala’s founding of the Malala Fund is incredibly heroic because she is making a real difference in the lives of children around the world. Instead of only telling her story, she worked harder and used her experiences to make a difference in the world. “In Nigeria, she spoke out in support of the abducted girls who were kidnapped earlier that year by Boko Haram, a terrorist group which, like the Taliban, tries to stop girls from going to school,” (NobelPrize.org). This quote provides an example for how she uses her experience to speak out for other children in need. It makes the connection to her past with the Taliban, and how she is able to sympathize with the girls in need. A lot of people may not have heard about the disappearance of these girls, as the media tends to tell the stories of the white women who have been abducted. Her speaking out gets the attention of those that may not have heard these stories, but would care just as much. It is oftentimes the public keeping the story alive that gets cases solved. Her outreach and advocacy still affects and helps people today, an incredibly heroic trait, as she is making so much difference in the wellbeing of others who she may not even know, yet she cares about them just as much. 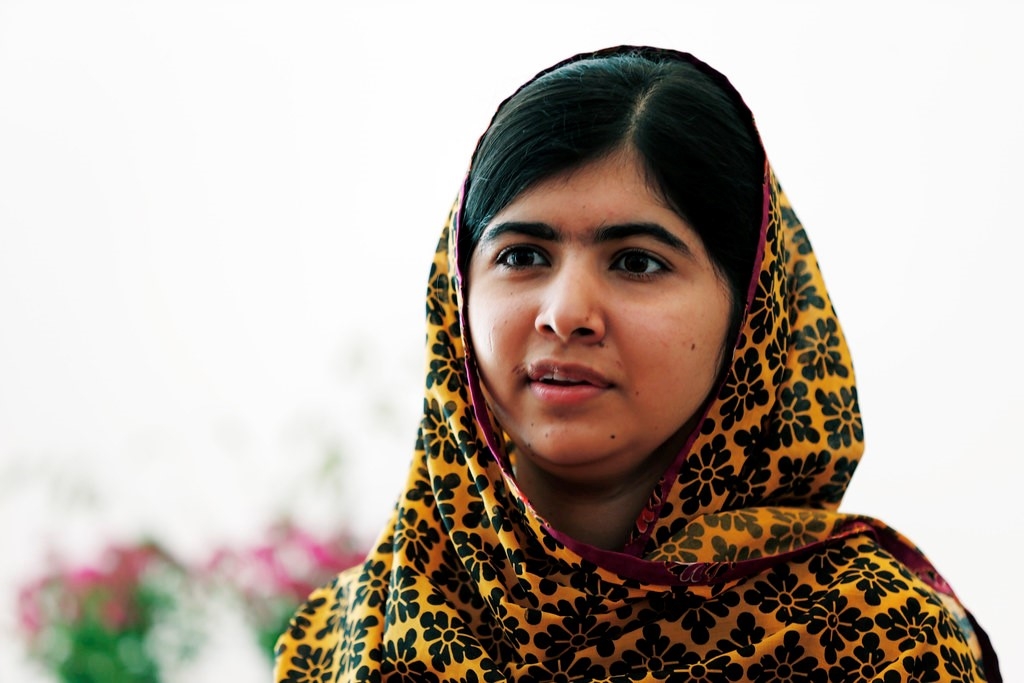 Malala Yousafzai"Malala Yousafzai" by Statsministerens kontor is marked with CC BY-NC 2.0.The Malala Fund today still raises awareness for education in many places. They started a Covid-19 initiative to help girls get an education even through the pandemic. “Our goal should not be a return to the way things were but instead a renewed commitment to the way the world should be, a place where every girl can learn and lead,” (Yousafzai). She continues to reach out, and raise awareness about girls’ access to education across the world. She’s a hero to me because of her ability to speak out, and advocate for herself and others even in the face of danger. I admire her perseverance, and though I hope never to be in the situation that she was, I hope that I, like her, will be able to recognize injustices around me and speak up. Malala Yousafzai has overcome much in her life, she spoke out for herself and others in the face of danger, and continues to do so today, if those things on their own didn’t make her a hero, the combination certainly does.

"Malala Yousafzai" by Southbank Centre London is marked with CC BY 2.0.

"Malala Yousafzai, Youth advocate for Education, in New York" by Global Partnership for Education - GPE is marked with CC BY-NC-ND 2.0.