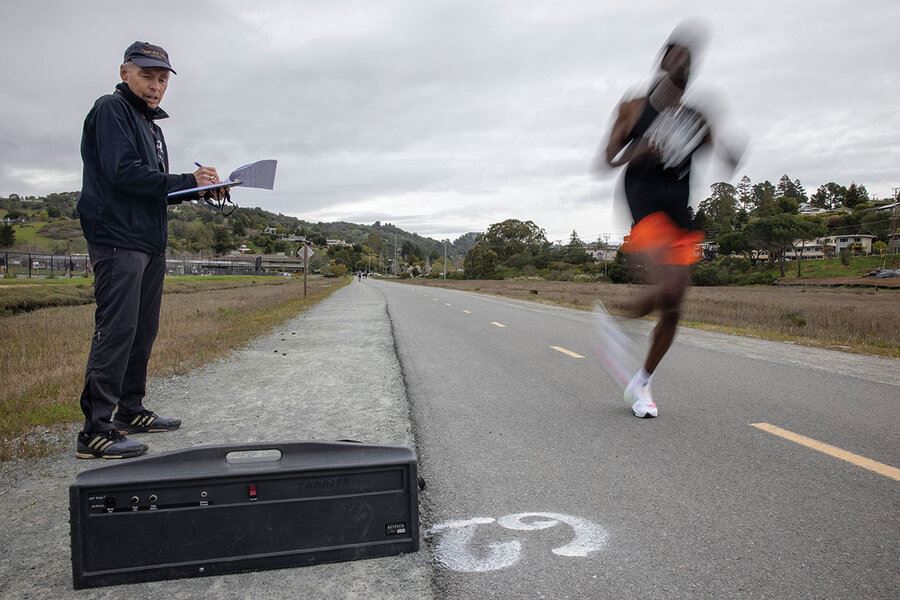 Frank Ruona, a running coach for the 1000 Mile Club, a running group that includes current and former inmates from San Quentin prison, records Markelle Taylor's time during a 10K run along a bike trail on March 14, 2021, in Mill Valley, California.Peter DaSilva/Special to the Christian Science Monitor

Frank Ruona had already spray-painted mileage numbers on the sidewalks for the 10K race before greeting his runners, most of them alumni from the running club he volunteer-coaches at San Quentin State Prison.

“It’s been a year and a day since the last workout at San Quentin,” he tells his tight fraternity in tank tops and trunks, nearly all of them former “lifers” who were members of the prison’s 1000 Mile Running Club. This morning’s 6.2-mile run is the first that Mr. Ruona, a former Army officer and accomplished marathoner who has a whistle perpetually slung around his neck, has organized since the pandemic began.

For the men gathered here, Mr. Ruona is more than a coach who keeps meticulous records on a clipboard and says “Let’s push it!” or “Looking good!” as they near the finish line. He is the steady ballast with a slightly quavery voice who writes parole support letters, helps them find jobs, corrals a truck from his old construction company to help with a move, and picks men up at the gate upon their release followed by a celebratory run across the Golden Gate Bridge and a pancake breakfast. 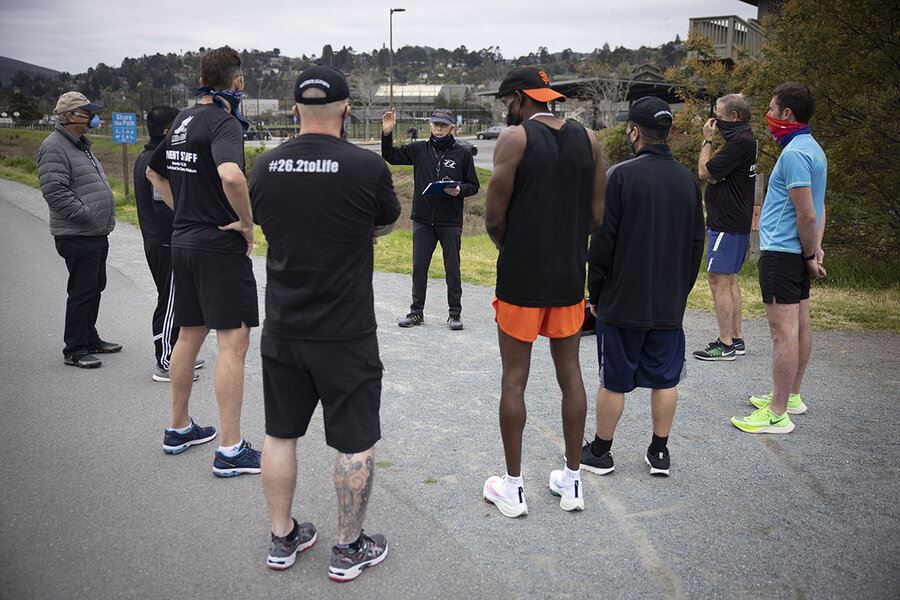 Frank Ruona prepares for a run with former inmates and running staff along a bike trail on March 14, 2021, in Mill Valley, California.Peter DaSilva/Special to the Christian Science Monitor

“He’s a strong father figure – a pops, a coach, and a good friend,” says Markelle “the Gazelle” Taylor, who was the fastest runner at San Quentin and was released in time to run the Boston Marathon in 2019. “A lot of people give lip service to caring but Frank puts it into action. It’s ‘do the best you can for yourself.’ That’s all he asks for.”

Mr. Ruona stepped into the role of the 1000 Mile Club’s coach serendipitously (the club is named for the goal of running 1,000 miles while in prison). While president of the elite Tamalpa Runners in Marin, he received a call from San Quentin’s community liaison looking for someone to sponsor a track club inside the prison. Mr. Ruona put the word out to his 600 members, but there were no takers. So he stepped up and volunteered himself. “I wasn’t sure what I was getting into,” he says. “But I would say from the first visit I was favorably impressed with the guys” – “favorably impressed” being Mr. Ruona at his most effusive. 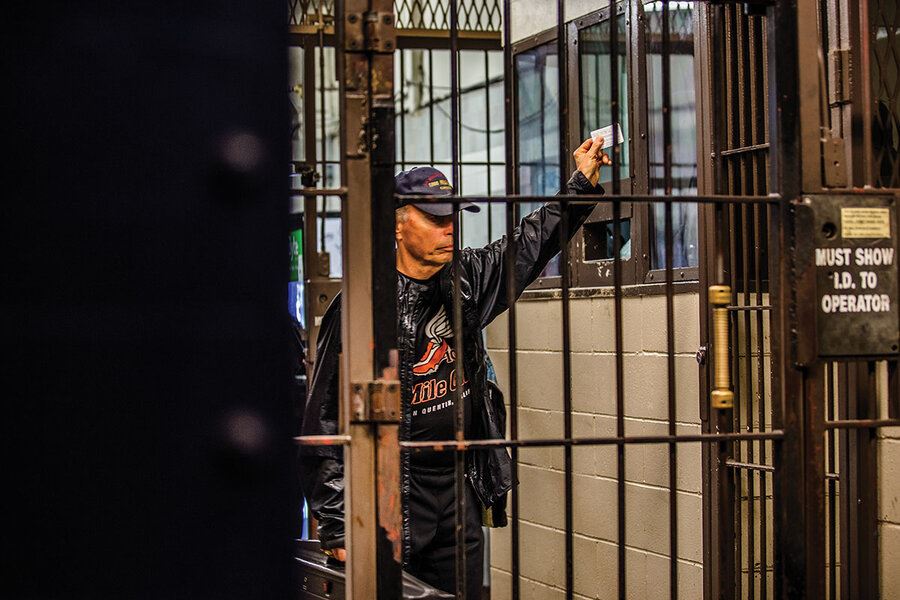 Every other Monday at precisely 1730 hours – he’s still on military time – he makes his way down the razor-wired slope of the prison yard, lugging his trusty digital clock and a shoulder bag crafted by his daughter from the running numbers of his races, often containing certificates of 1000 Milers’ achievements.

The most anticipated annual event is the San Quentin marathon, which involves 105 stultifying quarter-mile dirt, gravel, and concrete laps around a yard surveilled by armed guards in towers. Races are frequently punctuated by unexpected alarms requiring runners to drop to the ground. 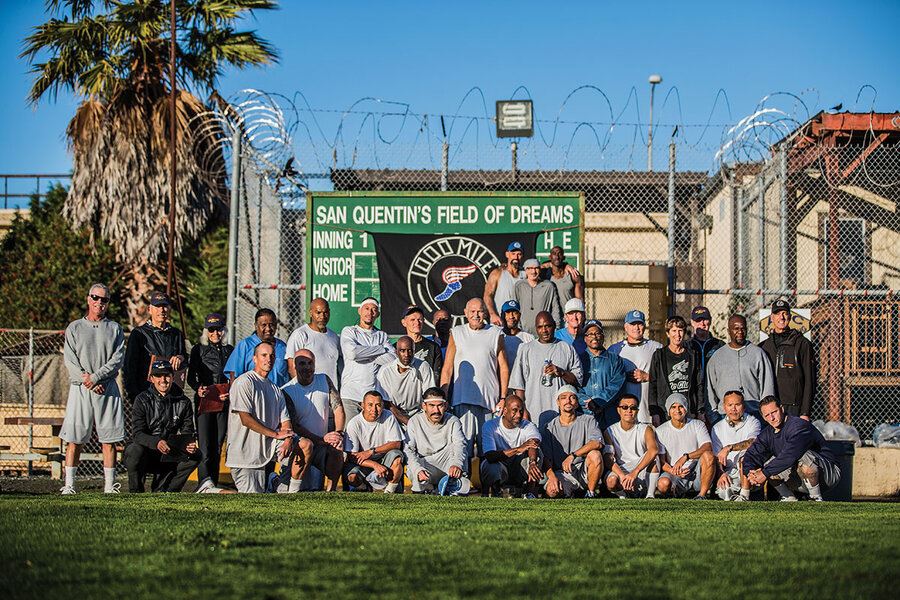 Until sidelined by injuries, Mr. Ruona was a serious competitor himself, completing 78 marathons and 38 ultramarathons. He didn’t start until age 40, which allowed him to compete in an older age group. He and a dozen friends once ran the Napa Valley Marathon tied together as a “centipede” in under three hours.

Married to his high school sweetheart, he got a degree in civil engineering and attended Airborne and Ranger school at the U.S. Army’s Fort Benning. Mr. Ruona served in Germany, then Vietnam, where he eventually became the company commander of engineering. He is a concrete person both literally and figuratively.

A man of deep faith, he takes the maxim “I am my brother’s keeper” extremely seriously. “I’ve been pretty fortunate in my life – growing up in a white middle-class town with two older brothers who set an example. Most of the guys in prison didn’t have it so fortunate. A lot of them have told me that in their lives, they had never set and achieved goals. We try to get them to realistically figure out what their abilities are so they can run at a pace they can maintain.” 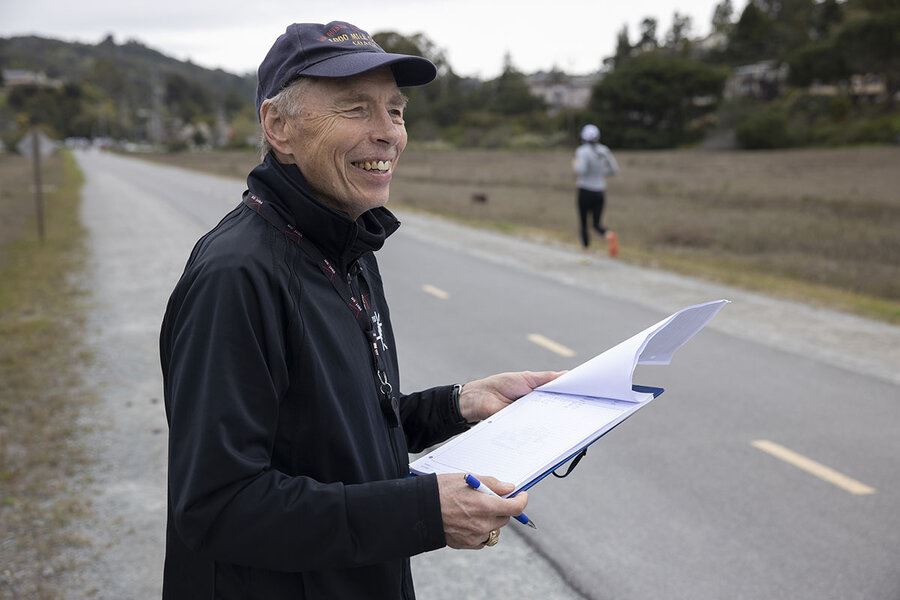 Running coach Frank Ruona waits for former inmates and running staff during a 10K run along a bike trail on March 14, 2021, in Mill Valley, California.Peter DaSilva/Special to the Christian Science Monitor

He is the moral center of “26.2 to Life: The San Quentin Prison Marathon,” a documentary to be released this fall. “For many guys who become separated from their families, Frank is a guy who shows up,” says director Christine Yoo. “He doesn’t ask questions. He meets them on the track and deals with the person they are today.”

He has brought together a group of volunteer coaches with considerable expertise, including champions like Diana Fitzpatrick, the first female president of the legendary Western States 100-Mile Endurance Run.

Coaching at San Quentin can change one’s thinking. Mark Stevens is a retired finance executive, and former “death penalty guy.” “I didn’t think you could rehabilitate someone [who had] committed murder,” he says. Mr. Stevens now writes parole support letters and frequently texts and talks with alumni like Mr. Taylor. “There’s no way I would have met these guys if it hadn’t been for Frank,” he says. “They’ve paid their debt to society and they are doing ... great.” Mr. Ruona himself is a lifelong Republican who now considers the criminal justice system deeply flawed.

Jim Maloney, another volunteer coach, says that gaining the trust of the men, many of whom are Black and have negative associations with white men, is a process that gradually unfolds. “At first it’s ... do you have a savior complex or is there some penance you’re paying off?” he observes. “Frank shows his emotions by his actions.”

The pandemic has meant that all volunteer programs at the prison have been on hold. Mr. Ruona has maintained a steady correspondence with the 1000 Milers who have been confined to their cells 23 hours a day – with training reduced to burpees and squats in the airless and windowless spaces.

He keeps close tabs on all his runners – and refuses to give up even on those who disappoint him. He was extremely close to Ronnie Goodman, a much-heralded artist and a talented runner. Mr. Goodman became homeless almost as soon as he was paroled in 2010 but continued to train with Mr. Ruona and compete in marathons. But Mr. Goodman stopped running and became belligerent with Mr. Ruona on several occasions. Despite their tribulations, Mr. Ruona calls him “a bighearted person who tried to do the best he could under difficult circumstances.”

His concern for everyone “inside” speaks to his character, says Jonathan Chiu, one of about fifteen 1000 Milers who have been released due to COVID-19.

Although running without barbed wire and guard towers on a picture-perfect path is still a novelty, for alumni there is one aspect of their lives that remains mercifully unchanged. As Mr. Chiu puts it: “The same Frank is out here.”