by Hailey Wright from San Diego, California in United States

3-2-1. BLAST OFF! The race for space finally ended in 1962 after John Glenn completed a full orbit around the earth. Mary W. Johnson was an African American mathematician and engineer at NASA that contributed to this historical event. “In 1922, the first female was hired at [NASA]… In 1943, [NASA] started recruiting black women… In that same year, Miriam D. Mann became the first black human computer… In 1950, Mary Jackson started working at [NASA]” (Timeline). Jackson was born in 1921 in Hampton, Virginia. “[S]he graduated from Hampton Institute in 1942 with a dual degree in Math and Physical Sciences” (Loff). Jackson found great success in her academics (especially in math) because she was very gifted and she was willing to work hard. She faced both racism and sexism in order to break the barriers between black and white through following her dreams. Jackson not only had a groundbreaking influence on the “space-race,” but she also had the determination to follow her dreams and continued to be patient despite segregation and racism around her; that made her a hero. 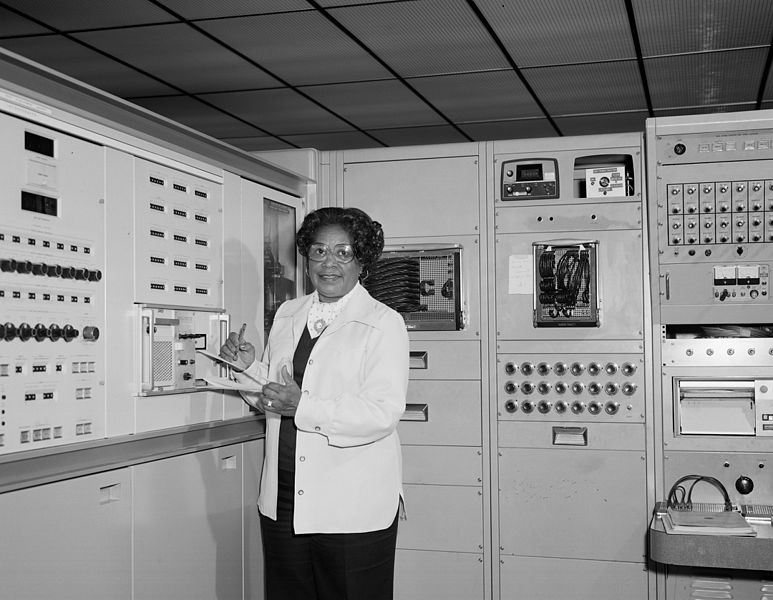 Mary Jackson at workNASA [Public domain]Jackson’s ability to stay determined through adversity allowed her to break barriers and become a great influence on NASA. When Jackson first started in the engineer program, “[s]he had to take these after-hour classes. She had to get a special permit from the city to allow her, as a black woman, to take those classes” (Ibmindia). Most people with her circumstances would have easily given up. However, she had the grit to endure anything she needed to follow her dreams of becoming an engineer. Her work that followed was possibly even more notable: “Before there were actual computers, they were people. At NASA, women had to do all the math and science calculations for aircraft and space missions… The women that worked for NASA were often called ‘human computers’” (Timeline). Jackson was able to be an extraordinary part of the space race as she participated in being a ‘human computer’. Mary Jackson was a hero because she was able to stay determined even when the odds were against her.

Patience allowed Jackson to continue to pursue her dream of becoming an engineer even though she faced racism and sexism. Throughout her career, Jackson continued to be surrounded by segregation: “Though President Franklin D. Roosevelt’s Executive Order 8802 prohibited discrimination in the defense industry, Virginia state law still enforced segregation in the workplace” (Timmons). Even though the country had its own laws about segregation, NASA worked under their own rules. While she was at work she still had to deal with a colored and a white bathroom, cafeteria, etc. - separated. When Jackson was trying to face the segregation at work, “[s]he considered resigning, but a chance encounter with a supervisor changed her mind. After hearing her complaints, [Kazimierz Czarnecki] invited her to work for him and she accepted. He quickly saw her potential and encouraged her to take engineering classes. In time, she was promoted to aeronautical engineer, making her NASA's first black female engineer, and developed expertise working with wind tunnels and analyzing data on aircraft flight experiments” (Timmons). It took a significant amount of patience to stay with her job even though she was treated poorly. However, because of her patience, she was able to find an opportunity to break barriers through becoming the first black female engineer at NASA. Mary Jackson was able to overcome the turmoil and adversity in her life by being patient and enduring until it all worked out.

Mary Jackson was determined to continue enduring her harsh circumstances so that she could follow her dreams. Also, her patience allowed to keep moving forward with faith that everything would work out. The segregation and lack of opportunity around her led her to becoming something incredible. As a result, “In the last 20 years, the rates of African American engineers increased by 12%” (Blodgett). Jackson is an inspiration because she cleared a path for mathematicians and engineers after her to follow their dreams. She shows me that I cannot give up on my dreams no matter the circumstances I face. Mary Jackson shows the influence we can have on the future if we are patient through our trials and continue to stay determined to follow our dreams.