Matine Khalighi / Helping the Homeless Colorado / He grew up wanting for nothing. Now he gives other students a leg up. 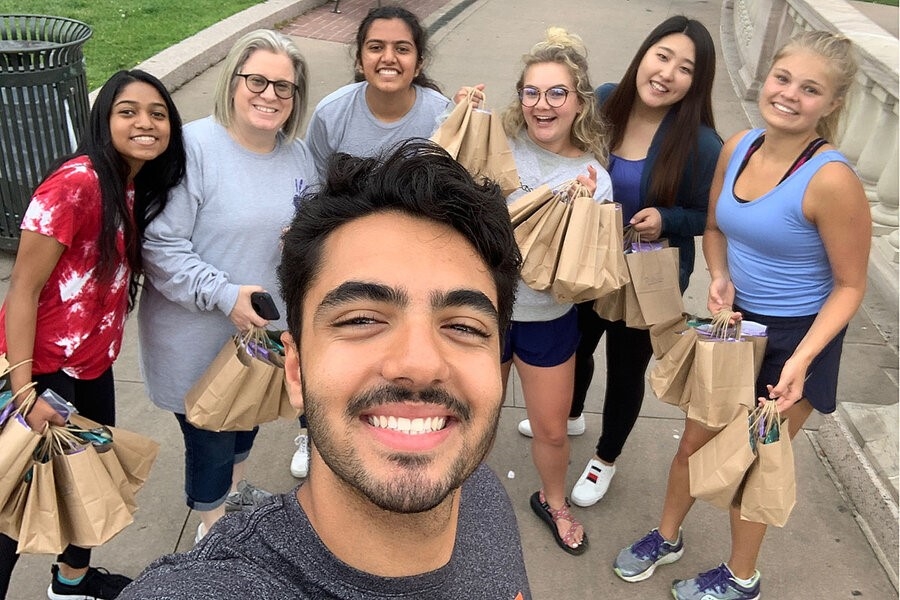 Matine Khalighi poses with student volunteers before handing out bags of basic necessities to Denver residents experiencing homelessness in the summer of 2019.Courtesy of Matine Khalighi

Five years ago, Matine Khalighi was living a comfortable life near Denver. The son of an emergency room doctor dad and a clinical pharmacist mom, the 14-year-old honors student wanted for nothing. Like many teens, he’d found himself yearning to better understand the world, how it worked, and why certain things were the way they were.

In particular, he wondered why his life seemed so dramatically different from that of the people he’d often see asking passersby for money, food, and shelter.

He recalls riding home from cross-country running practice and seeing people asking for help. “I’m living this life where I’m going home to have dinner and there’s this person just sitting out there holding a sign,” recalls Mr. Khalighi, who turned 19 in January. “And I’m like, ‘why is that OK,’ especially in the United States, which is supposed to be one of the wealthiest and best places on earth to live, that so many people are living in poverty?”

And so, at 14, an age when many teens are preoccupied with their own experiences, he set out to better understand the circumstances of others and to explore difficult questions about privilege, access, and inequality in society.

Some of the answers he sought came when he enrolled in a community service class at Campus Middle School in Greenwood Village, Colorado, where he and his classmates raised money for children in the foster care system. Helping out felt good, he says. The project also opened up his eyes to the great need that existed among people experiencing homelessness in Colorado.

That first school project lit a fire in him and he felt that he had to do more to help. So what began as an informal group of friends passing out care packages to those in need in downtown Denver on weekends evolved in 2016 into a youth-led nonprofit, Helping the Homeless Colorado, which helped to raise more than $130,000 to provide basic necessities. More than 25,000 people engaged with the group’s 2019 #SpreadTheLove campaign, which invited Coloradoans to share, with permission, photos and videos of themselves talking with someone experiencing homelessness.

“This is truly a student-run operation and they have managed to pull this all off magnificently,” says Donald Burnes, a former Helping the Homeless Colorado board member. “They all deserve a great commendation and many cheers,” he says.

In the fall of 2019, Mr. Khalighi and his team of student volunteers decided to step back from their work and revamp the organization. Last June, after months of huddling in person – and later virtually due to the pandemic – to brainstorm about strategic planning, fundraising, and coalition building, they came up with a new plan. To help more young people, the team renamed the organization EEqual and shifted its focus to the educational needs of students living in poverty, particularly those in unstable housing.

The organization has since raised and distributed $15,000 in college scholarship grants for students grappling with homelessness.

There are an estimated 1.5 million homeless students in the U.S., of which about 23,000 are in Colorado. Mr. Khalighi says he and his cohorts strongly believe that investing in education is one of the most effective ways to help break the cycle of poverty.

“In my calculus class of 30 [students] senior year, there very well could have been four or five students who were either going to be sleeping in a car, going to a shelter, or staying with a friend, just because they didn’t have a home of their own,” says Mr. Khalighi. “But when I’m sitting next to them, nobody knows. Nobody talks about that because we’re all taught not to talk about money and stuff, which is understandable, but [because we don’t] it’s so easy for them to fly under the radar. I think the worst part is the stigma.”

Mr. Khalighi says he and many of his classmates were shocked to learn that the 2019 class valedictorian had been homeless, something they only found out when she shared her experience in her graduation speech.

“Afterwards, I was like, ‘Oh my gosh, we have to talk. Like, you’re literally the kind of people we’re trying to serve,’” he says. “Later, we ended up talking [about her experience] on the phone and I learned a lot.”

Mr. Khalighi’s efforts have earned him a long list of honors. He won the President’s Volunteer Service Award three times, and was a TEDx speaker and a leader in the global Ashoka Young Changemakers program. This past spring he was honored with the Prudential Spirit of Community award and the Gloria Barron Prize for Young Heroes, which included a combined donation of $12,500 to EEqual. Last year he was admitted to Harvard University, which he delayed by a year so he could focus on EEqual.

One EEqual college scholarship recipient, who requested that her name be withheld to protect her privacy, says she can attest that the nonprofit is living up to its mission. “The organization made a difference [in my life] by removing the stress of trying to figure out how I would pay for my tuition,” explains the student now enrolled in Arapahoe Community College in Littleton, Colorado. She says she has been living in a motel for the past few months. “[Their help] also reminded me that there are people out there who want to see someone succeed on achieving their goals as a student.”

The student communicates regularly with Mr. Khalighi by phone and email and says she is constantly amazed by the work that Mr. Khalighi and his fellow youth leaders carry out so selflessly.

“His organization is important because it brings awareness to the society we live in,” she says. “It focuses on the struggle homeless students go through, that not all homeless people are drug addicts, have mental illness, or [are] a threat. This organization helps to bring understanding that [people experiencing] homelessness come from all different backgrounds.”

Mr. Burnes, who is the co-founder of the Burnes Institute for Poverty Research at the Colorado Center on Law and Policy, praises the passion and dedication Mr. Khalighi and his peers bring to their work. “This is very, very important and valuable work, and it provides some gifted but needy students a real opportunity to overcome financial hardship and some systemic discrimination,” he says.

Mr. Khalighi plans to start at Harvard in the fall. Before he goes, he hopes to have laid the foundation for the organization to begin running youth-led clubs at a handful of middle and high schools in the metro-Denver area. The aim will be to educate young people about homelessness, with an emphasis on breaking stereotypes and combating misinformation.

“Like it’s not ‘homeless people,’ because homelessness is not part of someone’s personality,” he says. “It’s just a phase that they’re going through. So, I like to say ‘people experiencing homelessness.’”

The ultimate goal is to expand EEqual programming to more schools across the Rocky Mountain state and eventually nationwide.

“Oh, my gosh, education, it’s everything, so like, why wouldn’t we invest in it?” says Mr. Khalighi. “I think it’s the solution.”