Spurred by the water crisis in Flint, Mich., Gitanjali Rao invented a device that makes testing for lead at home easier.

NOVEMBER 21, 2017 - HIGHLANDS RANCH, COLO. - In many ways, Gitanjali Rao is a typical 11-year-old: energetic and chatty, with a smile that lights up her face. She can also talk easily about carbon nanotubes, Arduino processors, the reactions between lead acetate and chloride, and how to think through a long-term design process – from conceptualization to experimentation and building. Plus, she’s driven to come up with real solutions to big problems. 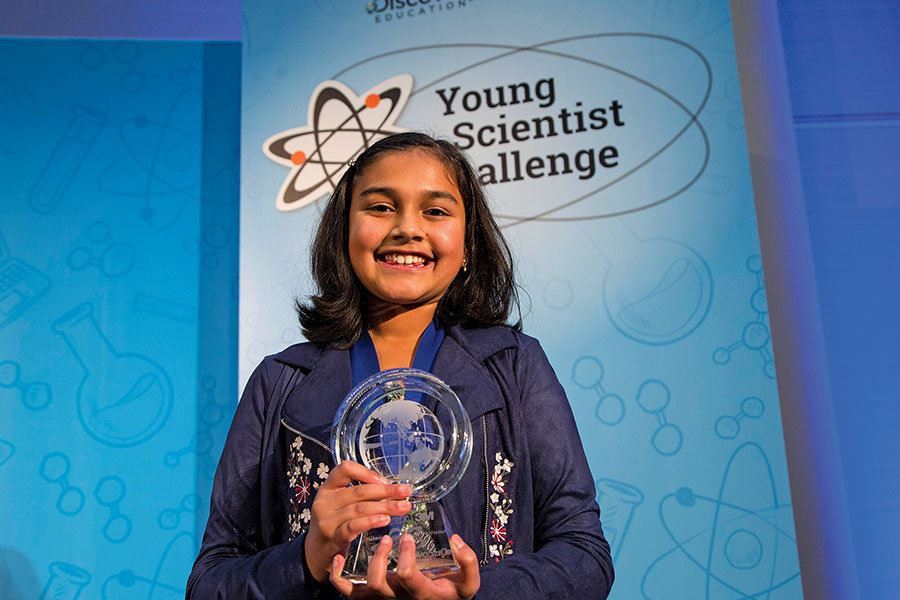 Last month, Gitanjali earned the top prize at the Discovery Education 3M Young Scientist Challenge after she presented her invention – a portable device that can test for lead in water – to a panel of scientists and school administrators from around the country. The water crisis in Flint, Mich., spurred her work.

“What really stands out about Gitanjali is how she exudes passion for making a difference through her innovation,” says Kathleen Shafer, a 3M research specialist in plastics technologies who was paired with Gitanjali over the summer as a mentor. “It was obvious from the first moment I met her,” says Dr. Shafer, who made her comments in an email interview.

For Gitanjali, coming up with an innovative solution is not a new thing – and it’s the reason science is her favorite subject.

“Science allows me to look at approaches to solve the real-world problems out there,” she says in an interview at STEM School Highlands Ranch in Colorado, where she’s currently a seventh-grader.

Not all her ideas have been as practical as the water-testing device. There was her concept, back in second grade, for an automated chair that went underground to save on space. A year ago, she entered the Discovery competition with a snakebite detection device.

This time around, Gitanjali focused on water testing as she learned more about the situation in Flint, Mich. – which she first read about as a 9-year-old – and found out how limited the options were for people to determine if their water was contaminated.

“I hadn’t thought about creating a device until I saw my parents try to test for lead in our water,” Gitanjali says. “I realized it wasn’t a very reliable process, since they were using test strips.” Some strips labeled their water as safe and others showed that lead was present. The more accurate option – collecting samples and sending them in for analysis – was both expensive and time-consuming.

“I wanted to do something to change this not only for my parents, but for the residents of Flint and places like Flint around the world,” says Gitanjali, who lights up with animation and speaks with remarkable poise as she describes the process she went through.

She started with brainstorming. She quickly realized that her initial idea – coming up with a way to remove lead from water, possibly by finding a bacterium that could remove it – wasn’t very practical and might introduce other hazardous chemicals into water. She stumbled onto the idea of carbon nanotube sensors – chemical sensors at the atomic scale – after reading about them on an MIT website, in an article about how useful they are for detecting hazardous gases. When certain ions are introduced into the carbon nanotubes to react with those gases, Gitanjali explains, the molecules in the gases combine with the introduced ion to form compounds, which can then be tested.

The article got Gitanjali thinking: Why couldn’t she use the same idea to test for lead in water? She started researching carbon nanotubes as well as the properties of lead and what sort of chemical would react with it. She also considered options – and settled on an Arduino processor – to receive and transmit the data.

Gitanjali then moved from brainstorming to experimentation. She decided on lead acetate as the most common compound of lead found in water and chloride as the ion she would introduce to react with the lead acetate. Also, she chose to work with “buckypaper,” a thin sheet made from carbon nanotubes that she could fold, cut, and manipulate. Gitanjali then moved to the prototype development phase to bring it all together.

Named for a Greek goddess

The result: Tethys, named for the Greek goddess of fresh water. It’s a small blue housing (Gitanjali built it using her school’s 3-D printer) with computer chips and a battery inside, a disposable cartridge that can be dipped in water, and a Bluetooth device that transmits the data to a phone. A free app (which Gitanjali designed with support from her computer science teacher) gives instant results.

“I’m so impressed with her. Every time I meet with her, she’s already 10 steps ahead,” says Simi Basu, the computer science teacher, who says she pushed Gitanjali to simplify the app and make it user-friendly. “The best thing I love about her: She’s not afraid of failure at all.”

That’s what Gitanjali says she emphasizes most to other children who might want to invent or innovate – that failure is part of the process.

“I always tell everybody who is interested in science and wants to create a device but is worried it won’t work, to not be afraid, to try,” she says. “Failure is just another step to success.”

Roadblocks along the way

In the course of developing Tethys, Gitanjali hit numerous roadblocks – including the fact that her family moved cross-country, from Tennessee to Colorado. Arriving in Colorado over the summer, Gitanjali had been selected as one of the competition’s 10 finalists but had no idea where she could do tests and experiments involving hazardous chemicals. She emailed a chemistry teacher at her new school, a science-focused K-12 charter school, and was told she was welcome to use the school’s labs.

Shafer, her 3M mentor, also helped – not just with developing the device, but also with winnowing her presentation down to five minutes, which Gitanjali says was a challenge. (She ultimately cut 52 slides down to 19 and managed to convey a massive amount of complicated material in five minutes through a clear – but lightning-fast – delivery.)

Shafer notes that she’s a big fan of competitions like this one for the outlet they give students to work on what they’re interested in and to apply skills in a real-world setting. Such competitions also make connections between children and working scientists – perhaps allowing students to envision what a career could look like and see that those scientists aren’t one-dimensional. “I think we sometimes underestimate the power of simply ‘opening the door,’ ” Shafer says.

Gitanjali is quick to credit not only Shafer and Ms. Basu with helping her, but also her parents, who she says have constantly supported and encouraged her “crazy ideas.” And there’s the scientist who is her inspiration: Marie Curie. Gitanjali loves that Curie discovered two new elements for the periodic table and also “had the courage to perform hazardous experiments” at a time when there were significant risks to doing so.

Along with the honor of winning the competition, which is open to fifth- to eighth-graders, Gitanjali received a check for $25,000, which she plans to use to further develop her device and get production started (her goal is for it to be commercially available within a year). She also wants to donate to the Children’s Kindness Network (an organization that she volunteers for) and save for college.

She already has big plans for the future: studying epidemiology and genetics at the Massachusetts Institute of Technology in Cambridge. And when she’s not experimenting or inventing, Gitanjali loves to fence, swim, bake, and play three instruments – piano, bass guitar, and clarinet.

But she’s already thought of the next challenge she wants to try to solve: the growing problem of adolescent depression. And she has a working concept for what she wants to create (which may involve gene editing and measuring levels of serotonin) – a “happiness detector.”

Read more at MY HERO Newswire