Message in a bottle: Forensics meets marine science with eDNA

You’ve heard of the challenge of seeing the forest for the trees. Marine scientists have a similar struggle. A new tool enables researchers to study not just individual sea creatures, but whole ocean communities. This is Part 3 of “Peering into the deep,” a five-part series exploring our evolving understanding of life beneath the waves.

AUGUST 15, 2019 - NEW YORK; AND MOSS LANDING, CALIFORNIA - It doesn’t look like much. At a glance, it seems Mark Stoeckle is holding a bottle of water to quench his thirst. But there’s so much more than H2O in that small plastic bottle. 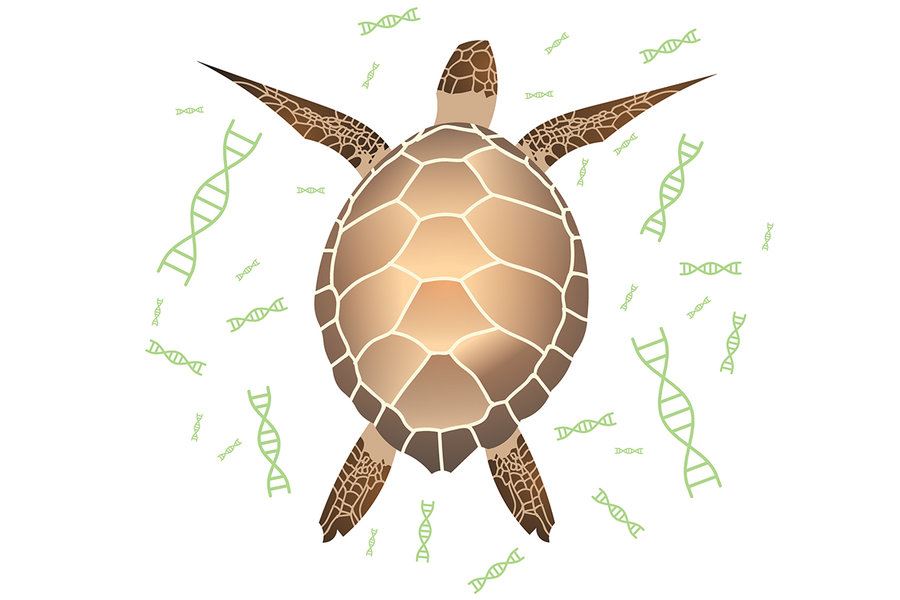 Jacob Turcotte/CSM StaffJacob Turcotte/StaffDr. Stoeckle pours the fluid through a special filter atop a glass contraption that looks a bit like a pour-over coffee maker. A yellowish gunk collects on the filter. Clearly this liquid isn’t potable. It’s seawater the scientist collected in Barnegat Light, New Jersey.

And that slime? That’s actually the stuff he wants. It potentially contains cells, or bits of cells, from as many as 20 species of fish that sloughed off into the water as the fish were going about their business. By sequencing the DNA fragments in that gunk, Dr. Stoeckle aims to identify which fish were swimming around the area just before he collected those water samples.

This trace genetic material known as environmental DNA, or eDNA for short, can also be found on land in soils, snow, or other environmental samples. Scientists have only just begun to plumb the possibilities for discovery that eDNA holds, but in the ocean, it might help pierce the veil of the strange world beneath the waves.

Much of ocean life remains a mystery. Scientists suspect there could be hundreds of thousands of species yet to be discovered. The more they learn, the more complex and dynamic a view of ocean life they get. A myriad of high tech observational tools have offered scientists glimpses of isolated pieces of that environment. But eDNA offers an opportunity to stitch those pieces together for a view of the whole tapestry of life in the ocean. 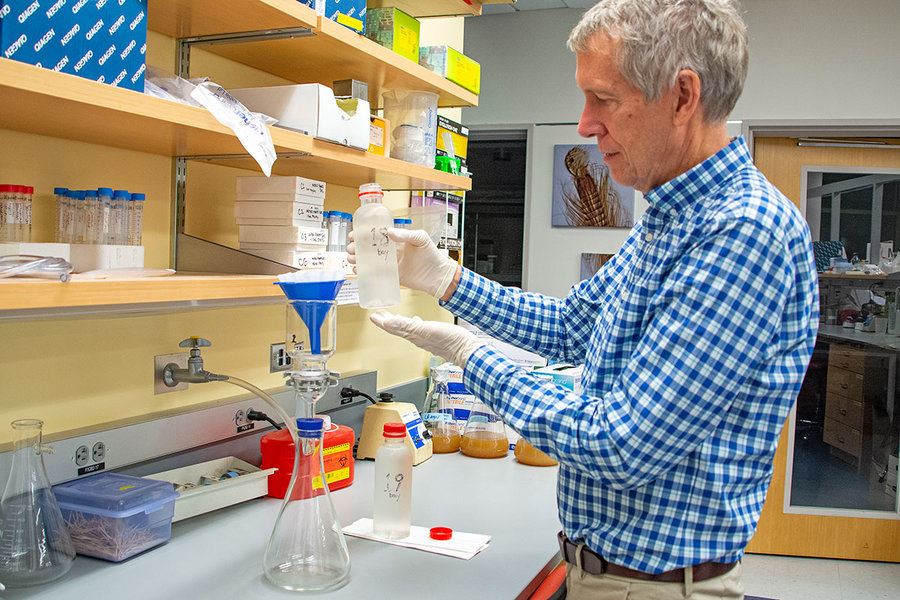 Researcher Mark Stoeckle demonstrates a new scientific tool at his laboratory at The Rockefeller University in New York on July 8, 2019. From a bottle of seawater, he can identify which fish swim in a particular underwater area using environmental DNA samples.Eva Botkin-Kowacki/The Christian Science Monitor“It’s like we have a star map now where we can see the brightest stars but there are many more out there,” says Dr. Stoeckle, senior research associate in the program for the human environment at The Rockefeller University in New York. “I think [eDNA] has the potential to greatly improve our understanding.”

To survey ocean life, researchers typically drag trawl nets or haul up traps and log what turns up in them. Development of underwater cameras, sonar, and hydrophones that record the sounds of the sea can offer additional texture to those snapshots. The ocean is vast, however, and these methods can be costly, time consuming, dangerous, and limited in scope. But eDNA offers an inexpensive way to widen that lens.

“It opens up a whole world of what we can do,” says Francisco Chavez, an oceanographer who also uses eDNA extensively in his work.

Forensics of the deep

eDNA analysis is a lot like forensic work at a crime scene, says Dr. Chavez, a senior scientist at the Monterey Bay Aquarium Research Institute (MBARI). Investigators gather evidence, compare it against a suspect bank, and hope for a match.

When targeting a specific species, researchers sift a sample for a signature segment of DNA, called a barcode. At other times, they sequence all the DNA in the sample and then compare the gene soup against barcodes in a scientific library to identify the variety of species represented in the sample.

Generally, says Dr. Chavez, they get a number of “hits” and often an equal number of “unknowns.” Those unknowns can be as exciting as the “aha” of finding a match, because they offer the opportunity to learn something new.

Dr. Stoeckle knows that thrill of discovery. Water samples he took from Barnegat Light previously revealed two fish that had never before been documented in New Jersey waters: Gulf kingfish and the Brazilian cownose ray.

eDNA could also help unravel some riddles scientists are already puzzling over. Like the so-called White Shark Cafe, a mysterious gathering of adult white sharks in the middle of the Pacific Ocean.

Barbara Block, a marine biologist at Stanford University, discovered this enigma through her pioneering work using electronic tagging to track highly migratory fish like tuna and sharks. But she isn’t sure why the sharks she tagged gather at the cafe. Could some other fish that the white sharks like to munch also gather there?

“Biologging tags pointed the way for where the sharks were,” Dr. Block says. “I believe that the eDNA will help us paint the picture of who [else] was there when the white sharks were there.”

Furthermore, the traditional biologging techniques, while successful, are expensive and challenging. So Dr. Block and her colleagues tested out new mobile eDNA sequencing tools on a recent trip to the Shark Cafe. In less than two days, researchers on board the ship were able to confirm the presence of great whites without having to wait for one to surface and show off its telltale fin.

It was a proof of concept test, and the results were incredibly encouraging, says Dr. Block – showing that rapid sequencing with mobile technology could be used on board a ship.

“The beauty of eDNA is that oceans aren’t transparent, it’s very hard to tell what’s there, and much of life on Earth lives beneath the sea,” she says. “It has the promise of providing us a little bit more of a direct knowledge of who’s present on a real time basis.”

eDNA could also fill in gaps left behind with traditional surveying techniques. There are places large trawling boats and nets simply cannot go, for example. But eDNA can detect the presence of any species that has shed cells in the water collected.

Greg Hinks, principal biologist for the New Jersey Bureau of Marine Fisheries, has been testing the new technique against the old. He co-leads a regular ocean trawl survey of sport fish off the coast of New Jersey and has begun to take water samples alongside the trawls for Dr. Stoeckle to compare the results.

“The eDNA is definitely going to find more species than what we’re catching in the trawl survey,” Mr. Hinks says. “I have no doubt whatsoever.”

In a far more remote region – a marine protected area in the middle of the Indian Ocean – Dr. Block has also been experimenting with eDNA surveys. Already, her team detected the presence of rare shark and other fish species in the area.

“It’s a neat technology that still has to be fine-tuned and made a little more precise,” says Dr. Block. “But with scientific investment, it’s one of the most promising techniques we have to rapidly census what’s in our oceans.”

There’s still a lot to learn about the role eDNA might play. Can eDNA ferret out and identify species never before known to science? Why do some creatures leave a clearer trail of genetic material than others? Does eDNA reveal only a fleeting snapshot in time, or can it offer more of a time-lapsed image?

“As science goes, it’s brand new,” Dr. Stoeckle says. He hosted the first national conference on marine eDNA at The Rockefeller University last year. “There’s a lot of excitement about it. It’s not standard practice in any application yet, but I think certainly over the next 5 to 10 years it will be a standard part of fish assessment in the ocean.”