Migrants left home for a reason. Returning is a struggle.

Reintegration programs can help would-be migrants get back on their feet if they decide to come back home. But they also serve as a test: What does it take to keep more citizens from wanting to leave in the first place?

OCTOBER 11, 2019 - OGUN STATE, NIGERIA - A former political office is an unlikely location for a small convenience store, but it works for Olanipekun “Tope” Adenike. When offering directions to her business, she simply tells people to “come to the PDP shop.” 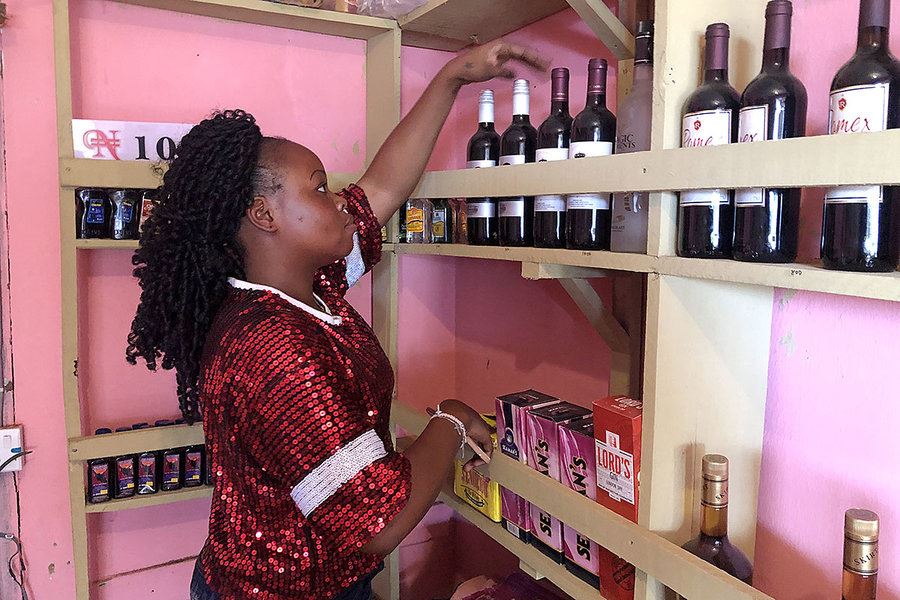 Olanipekun “Tope” Adenike arranges items for sale in her convenience show in Sagamu, Nigeria. Ms. Adenike began the shop with help from a small grand from international agencies for Nigerian migrants returned from Libya.Ashley Okwuosa

The green awning with the People’s Democratic Party logo scrawled in white sits on a narrow street across from looming billboards of Nigerian President Muhammadu Buhari and Vice President Yemi Osinbajo, promising progress and change.

But every year, many Nigerians decide their best chance to find progress and change is in another country. They set out across the Sahara toward Libya and then Europe, and many don’t make it. This year alone, the International Organization for Migration (IOM) has repatriated more than 3,000 Nigerians from Libya, and Ms. Adenike is one of the many returnees who arrived early last year. Since 2015, more than 40,000 migrants have been returned to their home countries from Libya, where abuse of migrants is widespread. [Editor's note: This story has been edited to update the number of Nigerians returning home in 2019.]

The Nigerian government facilitated the return, with a promise to reintegrate returnees and create opportunities so fewer Nigerians seek greener pastures abroad. Ms. Adenike says that when she arrived, she was taken back to her home state of Ogun, where officials welcomed her. “They told us that now that you’re back to your fatherland we will help you and if you want to continue with your studies or you want to start a business, we are ready to finance it.”

“They are the ones that said we should come home, but yet they have nothing to offer us,” she says, as the generator powering her store hums loudly in the background.

This shop in the southwestern town of Sagamu, where she now sells sardines, tins of milk, and soft drinks, was made possible by a small grant from international agencies. Several similar programs for returnee rehabilitation and training have been launched by partnerships between the IOM, the Nigerian government, and the European Union’s Emergency Trust Fund for Africa, which was set up in 2015 during the height of the Mediterranean migration crisis.

The trust fund allocated more than €120 million ($132 million) to Nigeria for projects meant to address the root causes of irregular migration, from job creation to conflict prevention, and keep more would-be migrants at home. Critics have argued the fund needs more transparency to ensure enough funds are spent on development, rather than border security. Others argue the international assistance is vital, but only a short-term lift – masking some home countries’ challenges reintegrating their returnees.

“What the IOM and EU are doing is temporary. ... Who takes it up from there?” says Osita Osemene, the executive director of the Patriotic Citizens Initiative, a nonprofit organization that aims to educate Nigerians about the dangers of irregular migration. “The long-term solution is not feasible because the government is not fully involved. They have not been able to take ownership of the problem.”

The EU-IOM Joint Initiative for Migrant Protection and Reintegration was expected to run for three years, and initially earmarked to provide assistance to roughly 4,000 Nigerian returnees. But the immediate need in Nigeria was overwhelming.

“During the first few months of the project, we already surpassed the initial target,” says Saskia Kok, a migrant protection and assistance officer at the IOM office in Lagos.

Between November and December of 2017, the agency fielded requests for assistance from close to 5,000 returnees, Ms. Kok says. In 2018, Britain pledged to extend reintegration and rehabilitation assistance to 1,700 returnees through a partnership with the IOM and Nigerian government.

Ms. Adenike was one of them. Before leaving for Libya, she studied business at the National Open University, but could barely afford tuition; she had hoped to find work to finance her education. After returning home, she struggled to find a full-time job without a degree, and finally secured one teaching Yoruba language and social science to first grade students. But the position lasted for only three months because the school was unable to pay her, she says.

So when IOM called to offer assistance starting a business, she was overjoyed. “By then I had already lost my hope,” she recalls.

In late 2017, governments and nongovernmental organizations around the world were outraged after CNN reports appeared to confirm many African migrants, including Nigerians, were being sold as slaves in Libya. The viral video elicited vows from President Buhari to reduce the number of Nigerians who felt the need to leave the country, by strengthening the economy and increasing access to health care and education.

In the country’s 2019 budget, the government allocated 100 billion naira ($280 million) to zonal intervention projects, which include reintegration efforts for returnees; Edo state, in the south, has offered monthly stipends for returnees. Nigerian papers have reported corruption and mismanagement of funds for some development projects, however. For example, Innocent Duru, a journalist who has covered the increase in Nigerians migrating to Libya for the newspaper The Nation, uncovered a case of local leaders mismanaging funds allocated to create agricultural training programs for returnees.

Meanwhile, emigration continues. Many cite Nigeria’s growing unemployment rate as a reason for their departure. In 2018, people without work reached 23.1%, up from 18.1% the year before.

If returnees continue to come back to Nigeria without stronger assistance, Mr. Duru says, many will turn to crime or simply leave Nigeria again – if not for Libya, then somewhere else. “They say it’s all suffering here, that they don’t have a future here.”

This August, President Buhari established the Ministry of Humanitarian Affairs, Disaster Management, and Social Development, which will coordinate rehabilitation and reintegration efforts. Its creation is “a strong indication of the seriousness with which the Nigerian government regards issues of humanitarian intervention,” says Tolu Ogunlesi, the special assistant to President Buhari on digital and new media. He notes that the new minister was formerly in charge of the National Commission for Refugees, Migrants, and Internally Displaced Persons.

Since her return, Ms. Adenike has founded a local organization she calls ROSE – Returnees Organization of Surviving Emigrants – to educate others about the dangers of irregular migration.

“I wish I was made aware, I would not have fallen into the road of Libya,” she says. But despite her crusade, Ms. Adenike’s thoughts about leaving the country are nuanced.

She has always wanted to own a supermarket and feels the IOM funding has set her on a path to do so, she says, as her customers chat, the bright afternoon sun reflecting off her red-sequined blouse.

Still, if she could leave Nigeria to complete her education, she would. And most important, she says, there is so much left for her to see. “I still want to learn more, I still want to know what is going on outside of Nigeria.”

“If I see the opportunity to travel out of Nigeria to a better country that is not Libya,” she adds, “I will be joyful and happy to go.”