Born in Chattogram, Bangladesh, Dr. Mohammad Yunus is best known for his pioneering work in poverty alleviation, as well as for spreading awareness on the concepts of microcredit and microfinance. Founder of the Grameen Bank, in 1983 he created the foundation in hopes of helping fellow Bangladeshis by providing loans to entrepreneurs who are too poor to qualify for traditional bank loans––most of whom are women. Due to this, Dr. Yunus is often credited for making capitalism more socially conscious. Today, replicas of the Grameen Bank operate in more than one hundred countries around the world. After receiving his Ph.D. in economics at Vanderbilt University in 1970, Dr. Yunus became an assistant professor of economics at Middle Tennessee State University. Following this, he returned to his alma mater and directed the economics department at Chittagong University in Bangladesh. Then from 1993 to 1995, Professor Yunus acted as a member of the International Advisory Group for the Fourth World Conference on Women, appointed by the UN’s secretary-general. Additionally, he has been a part of the UN Expert Group on Women, the FinanceGlobal Commission of Women’s Health, and the Advisory Council for Sustainable Economic Development. Aside from the 2006 Nobel Peace Prize, Dr. Yunus has also received numerous international awards for his innovative ideas and commendable work, such as the 1994 World Food Prize, and the 1993 Humanitarian Award.

by NEWS FOR KIDS,
Singapore, 2006 from Oakham in United Kingdom 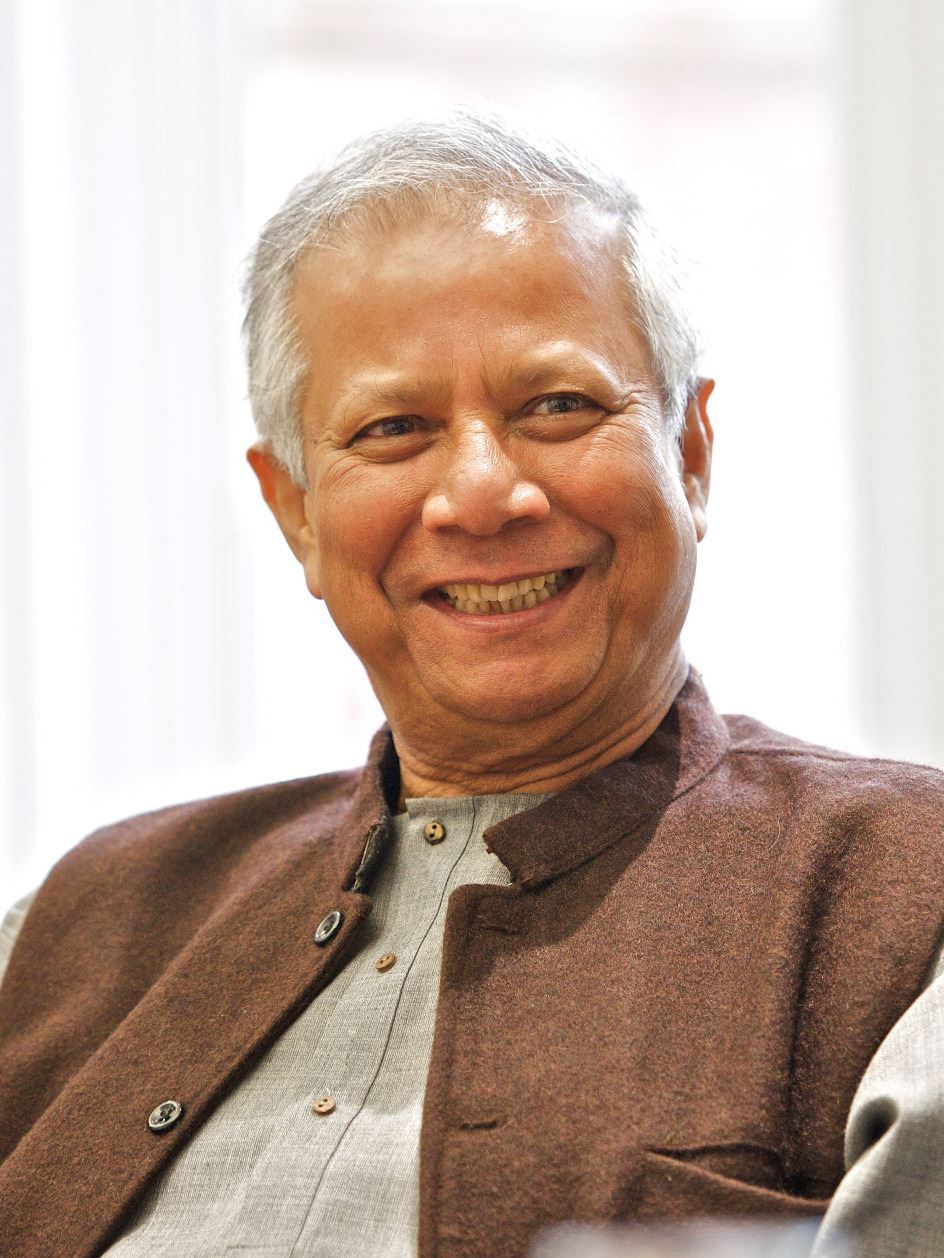 Muhammad YunusUniversity of Salford Press Office [CC 2.0] via Wikimedia CommonsThe world’s biggest award for peace has been given to a man who started a bank for poor people in Bangladesh.

Usually, when we think of heroes who fight for peace, we have in mind brave soldiers who stand up against aggressors, or presidents who sign peace agreements with their neighbours, or preachers who persuade their people to give up violence.

We don’t usually think of bankers or economists.

So, most people did not expect the 2006 Nobel Prize for Peace to be awarded to Mr. Muhammad Yunus.

However, people who know about his work say that he truly deserves this award.

Bangladesh is one of the poorest countries in the world. Mr. Yunus realized that one way to help people was to lend them money so that they could start small businesses. He had great faith in the people. He believed that if you gave them the chance, most of them would succeed. They would earn enough money to improve their lives – and pay back the money they had borrowed.

So, in 1983, he started the Grameen Bank, which means village bank. Today, the bank has more than 1,000 branch offices serving 35,000 villages. Around 95 percent of the customers are women. The money they borrow helps them make more money. For example, some women borrow money from the bank to buy stuff to sell at the market. Many women have turned into successful stall-keepers this way.

Others use it to buy a cow so that they can make money from its milk.
One group of women bought mobile phones with the money they borrowed. Nobody else in their villages had telephones. So, the “telephone ladies” provided a public telephone service for money.

The money they earn has helped millions of villagers to improve their lives. From having just one or two meals a day, they can now afford three. They can pay for their children’s education and afford medicines.

No wonder Bangladeshis treat Mr. Yunus like a hero and are not surprised that he’s getting the Nobel Peace Prize.

However, he says that it’s the ordinary people who have made Grameen Bank a success. “You look at the tiniest village, and the tiniest person in that village: a very capable person, a very intelligent person,” he says. “You have only to create the proper environment to support these people so that they can change their own lives.”

Banker to the Poor: Micro-Lending and the Battle Against World Poverty
Muhammad Yunus
Related pages