Tired of Netflix? Museums and theaters bring the arts home.

How can arts organizations, known for in-person experiences, engage audiences entirely online? As groups figure out next steps amid pandemic closures, some are finding creative ways to embrace fans and newcomers alike.

MAY 15, 2020 - Instead of attending her typical Saturday morning drawing class, Nora Paul is sitting in her apartment, stabbing tiny pieces of wool into something resembling Vincent van Gogh’s “Olive Trees.” 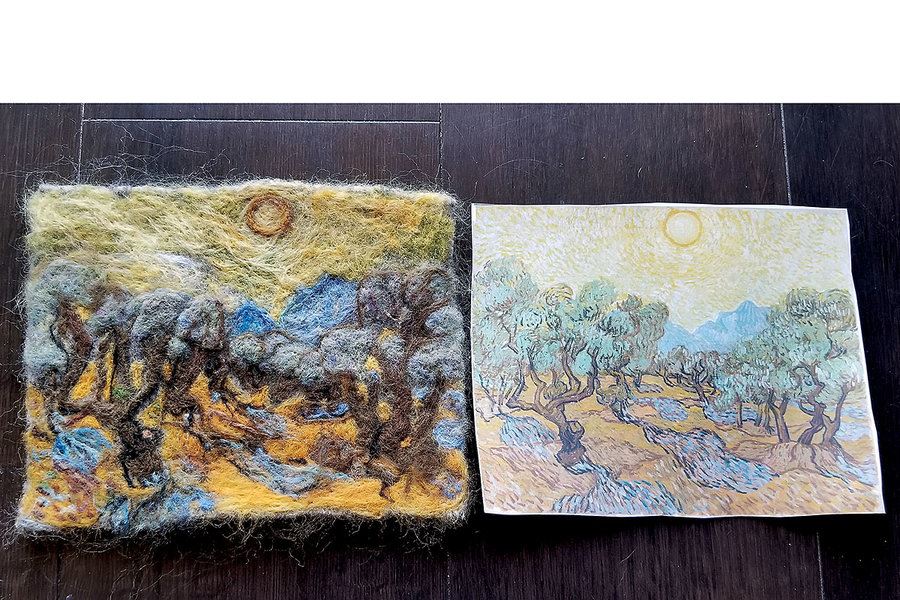 Nora Paul found this image of Vincent van Gogh’s 1889 painting “Olive Trees” (right) on the Minneapolis Institute of Art’s website and crafted a felted replica of it (left). Since closing its doors on March 13, 2020, the museum has encouraged patrons to find artistic inspiration in its vast digital galleries.Courtesy of Nora Paul

The inspiration for this needle-felting project came from the Minneapolis Institute of Art, which features the 1889 painting prominently in its digital gallery. Since the museum, known as “Mia,” closed its doors to help slow the spread of the coronavirus, it has encouraged patrons to find its art online. Ms. Paul, a retired college professor and longtime Mia fan, complied.

People around the world have been searching for enriching and entertaining experiences they can access from home. The arts world delivered, with online concerts, streaming plays, and virtual galleries. And even as prolonged shutdowns create a revenue crisis for theaters and playhouses, some observers say that investing in digital strategies now could actually make these institutions stronger.

Jonathan T.D. Neil, director of the Center for Business & Management of the Arts at Claremont Graduate University in California, refers to this trend as “arts media.” He says that when organizations such as museums, symphonies, and theaters use digital tools to record and distribute content online, they begin to act like media companies. During this time when arts groups must forgo the live experience, developing a strong digital presence can help arts institutions punch above their weight, improve accessibility, and expand their audience – even in a global pandemic.

“It’s a great way of maintaining relationships with their community,” says Mr. Neil. “It maintains the audience’s interest so that as soon as this thing passes, which it will, they will of course come streaming back, perhaps with new interest and new engagement.” 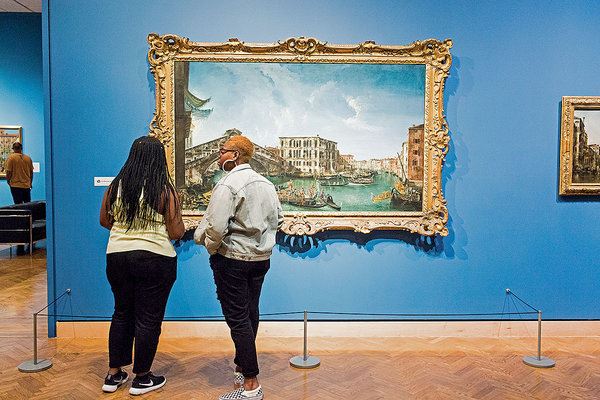 Along with museums, live music and theater venues have also been answering the call for online entertainment. Streaming services such as BroadwayHD have brought several seasons of all-star plays and musicals to home audiences, and The Metropolitan Opera has 14 years of its “Live in HD” series, archived, to lean on during this pandemic. Still, the nationwide shutdown has left some artists and organizations scrambling.

That’s not the case for Mia.

“We’ve been thinking about this for a while,” says Douglas Hegley, the museum’s chief digital officer. When Mia closed its doors on March 13, curators knew they had years’ worth of online content they could promote during the shutdown.

All their digital offerings, from “The Object” podcast to virtual-gallery scavenger hunts, were moved to a fresh landing page where anyone with an internet connection could explore. Since the closure, the museum has seen a surge in podcast listeners and social media engagement, especially on Instagram.

From her Minneapolis apartment, Ms. Paul has been browsing the museum’s website and creating art based on her discoveries. While she misses the traveling exhibits and annual flower show (and her drawing class), she has tried approaching the homepage with an open mind, letting trails of hyperlinks lead her to unexpected masterpieces. “I’ve always been a fan of serendipity,” she says. “That’s what’s always so satisfying about being in a physical space – you never know, turning the corner, what new riches are going to be in that room.”

No longer an afterthought

Other art museums have also been investing in their digital strategy. The Los Angeles County Museum of Art has won a Webby Award for its Snapchat presence, and the Dalí Museum in St. Petersburg, Florida, has a mobile app with augmented reality and themed tours. Google Arts & Culture Lab partners with museums around the world to capture artworks using its high-resolution art camera, creating a massive database of virtually accessible art. 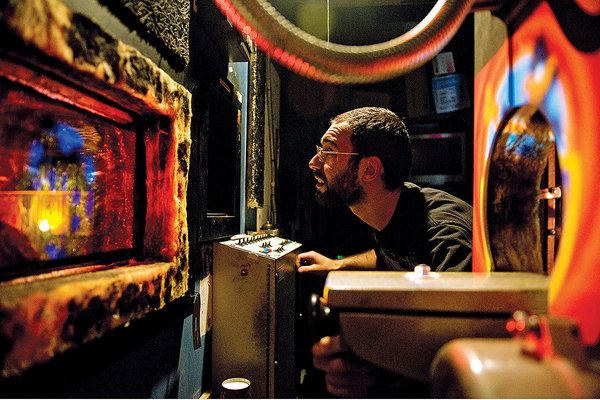 Movie projectionist Nick Lazzaro makes adjustments to the focus and alignment at a midnight screening at the Coolidge Corner Theatre in 2012, in Brookline, Massachusetts. Temporarily closed, the theater has found its online film seminars are proving popular.Ann Hermes/Staff/File

When Mr. Hegley started working at Mia in 2011, he says museums were far less visible online. “The digital folks would sort of be thought of as an afterthought, not central to the museum’s mission. That’s changed,” he says. “They understand that sharing digital content actually encourages visits. It piques curiosity. It makes people want to see the real thing.”

The show must go online

Like many nonprofit art-house cinemas across the United States, Coolidge Corner Theatre in Brookline, Massachusetts, aims to build community through film culture. To continue that mission in lockdown, it has been forced to innovate.

Within days of dimming its projectors on March 13, the theater transformed its website into a streaming hub for first-run independent films and launched several community-engagement initiatives. Staff members are making videos recounting formative filmgoing experiences and offering personalized movie suggestions based on patrons’ tastes. The theater’s long-running series of movie seminars, which were always capped at 45 attendees, have also moved online.

“The first thing we offered was ‘Rear Window,’ since we thought people would relate to that,” says Katherine Tallman, the theater’s executive director and CEO, referring to the Alfred Hitchcock film. “We had well over 200 people. ... That first seminar, we actually had somebody call in from Peru!”

Ms. Tallman hopes to reopen the cinema when it becomes safe to do so because it still makes more money from physical screenings than online streaming. But its new, community-oriented online component is here to stay.

Still, other organizations face significant barriers when it comes to embracing “arts media.”

In Houston, the Alley Theatre’s production of “1984,” based on the George Orwell novel, had a promising preview run. When the mayor banned large gatherings just days after opening night in March, Artistic Director Bob Melrose knew the theater had to act quickly to salvage the work of the cast and crew. Staff jumped into negotiations with multiple unions, earning a concession to rules prohibiting the recording of live performances. Mr. Melrose would be allowed to film a run-through of “1984” and distribute the link to ticket holders.

The Alley, he says, had never done anything like this, and he hopes the precedent will help ease burdens that theaters face year-round.

Strict rules against filming performances were designed to protect actors from nonconsensual broadcasts of their work. But they also leave American theaters at a disadvantage in international festival circuits, where foreign companies have high-quality recordings of their best shows. Successful exceptions in the coming months might help pave the way for greater flexibility, says Mr. Melrose.

“Once all these theaters get through this dark time, [they] are going to need help,” he says. “Maybe unions will say, well, if this is something that will help you guys get back on your feet, maybe this is a good new tool.”

Mr. Neil and Mr. Hegley agree that if arts institutions can use the coming months to experiment with digital content and hone their production skills, it could help them bounce back after the dramatic loss of revenue.

“The terrific thing about digital is that it can be iterative,” says Mr. Hegley. “You can keep ... trying out new kinds of content, new kinds of experiences, seeing how the audience responds and then pivoting as necessary. To me, that’s really exciting.”