by Shannon Luders-Manuel from LinkTV

I will go back to my life when women in captivity go back to their lives, when my community has a place, when I see people accountable for their crimes.

Permission to use this material
was granted by LinkTV.org 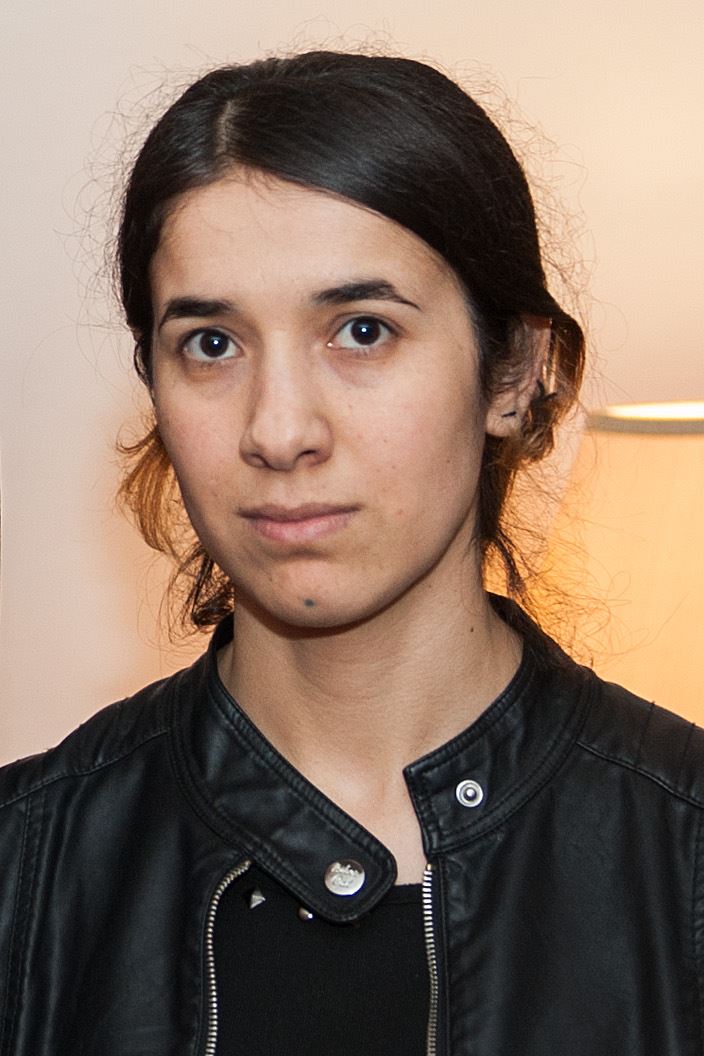 On August 3, 2014, ISIS fighters stormed Nadia Murad’s village of Kocho (also spelled Kojo and Khocho) in Sinjar, Iraq. Their goal was to destroy the Yazidi community, whom the Islamic State militant group deems heretic nonbelievers. During the occupation, thousands of men, elderly women, and children were slain, while Murad and other women, including girls as young as 8, were forcibly taken as sex slaves. Murad lost her mother, as well as six of her nine brothers in the attack. Murad was held captive for approximately one month and was repeatedly raped and beaten by fighters. After a lucky escape, she went into hiding and then found refuge in Germany.

Murad was only 21 when her life changed so abruptly. Now, at 24, she has become a global advocate for victims of sex trafficking, becoming the first United Nations Goodwill Ambassador for the Dignity of Survivors of Human Trafficking. Among her most heartbreaking experiences was being raped repeatedly by several guards until she lost consciousness. She finds it difficult to discuss what happened to her, but she is strengthened by her resolve to see other women liberated and their captors held legally responsible for their crimes.

In December 2016 Murad received the Vaclav Have Human Rights Prize at the Parliamentary Assembly of the Council of Europe. During her address, she stated: “I will go back to my life when women in captivity go back to their lives, when my community has a place, when I see people accountable for their crimes.” That same month, Murad was awarded the 2016 Sakharov Prize for the Freedom of Thought. She was also nominated for the Nobel Peace Prize, which ultimately went to Juan Manuel Santos, president of Colombia.

In April 2016, Murad spoke at an event hosted by Global Samaritan Resources, where she met Texas minister Dr. Michael Harbour. Inspired by Murad, he and members from other local Christian organizations teamed up to send 1,200 boxes of food to displaced persons in Iraq. With help from the Barzani Charity Foundation, Harbour and Pastor Matt McGowen were able to visit IDP (internally displaced persons) camps in Erbil and Hassahsham. Harbour told the website Rudaw, “We have a goal to open channels of communication and understanding… What if Christians, Muslims, Jews, Yezidis and others were working together to make the world a better place?” Interreligious peace prevailed in Kocho before the massacre, according to Nadia’s Initiative, which is dedicated to helping women and children who have survived genocide and human trafficking. The village once shared friendly borders with Muslims and Christians.

Just this month, Murad was able to return to Kocho for the first time since the invasion. She tearfully reunited with a brother who helped liberate the village as part of the Iraqi Popular Mobilization Force. In all, Murad lost 18 members of her family.

Human rights lawyer Amal Clooney is representing Murad, and the duo hopes to help enact prosecution against ISIS for international crimes. The International Criminal Court has no jurisdiction over Iraq; therefore, in order to bring members of ISIS to court, Iraq must send a letter asking the Security Council to establish an investigation. In March of this year, Clooney addressed the UN, stating that a resolution has already been drafted and needs only be sent by Iraq. In her address, she stated, “You can’t defeat ISIS on the battlefield alone, because you have to also deal with future recruiting.” 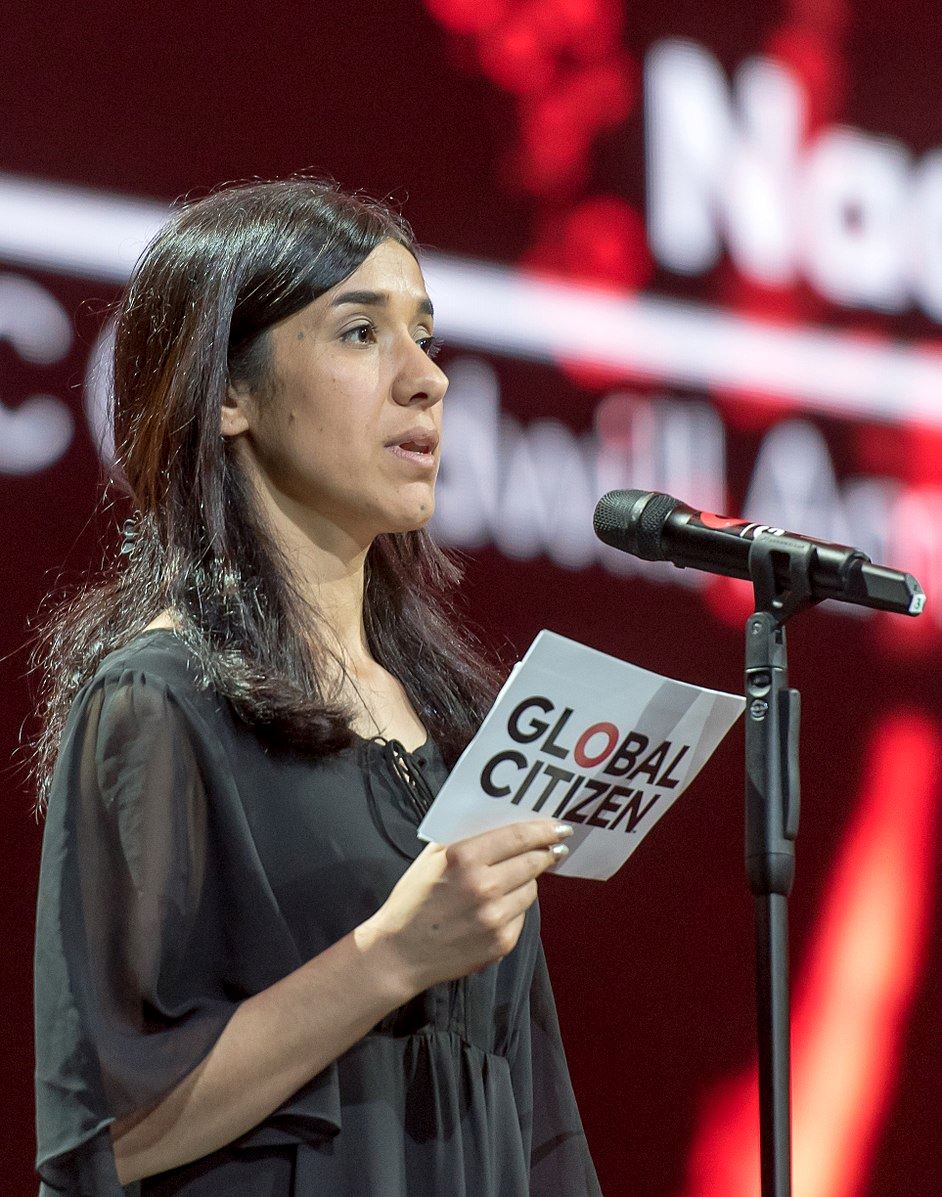 Nadia MuradFrank Schwichtenberg [CC BY-SA 4.0 (https://creativecommons.org/licenses/by-sa/4.0)]Clooney and Murad hope that bringing war criminals to justice, including for crimes committed against women and children, will send a message to others. According to an article in the New York Times, “One option under discussion among United Nations Security Council members is to establish a team to investigate all crimes committed by the Islamic State everywhere — not just against Yazidis.” They hope this might help circumvent hesitation from Iraq, as a strictly territorial investigation could expose Iraq to scrutiny as well. Clooney emphasizes the importance of timely action, however, as ISIS currently has a well-documented slave trade that includes courts, committees, and a large paper (and bodily) trail.

Murad continues to speak to others about her experiences in order give a face to atrocities that often seem removed from the realities of First World countries. In April, Murad spoke at the Stanford Global Studies student dinner and at the Edge Lecture Series in Princeton. In May, she met Pope Francis at the Holy See, along with the Republic of Vatican Minister of Foreign Affairs and the British Ambassador. She discussed the situation in Sinjar, her appreciation for the Vatican’s efforts to protect minorities, and a request for global awareness. In a blog post, a writer for Nadia’s Initiative stated, “[W]e don’t believe defeating ISIS by bombing alone will exterminate them, because the ideology is still there. We have to fight the ideology.”

Murad is continuing this fight with selfless action and steadfast resolve.

Former ISIS Sex Slave Becomes Global Activist Against Human Trafficking - The article on its original site.
Our Future and Dreams Have Been Taken - Yazidi Slave Survivors - Documentary short about the survivors
The Nobel Prize - Nadia Murad's bio on the Nobel Prize website