NASA eyes the ocean: How the deep sea could unlock outer space

Exploring the deep sea emboldens scientists to open their minds to the impossible. This is Part 4 of “Peering into the deep,” a five-part series exploring our evolving understanding of life beneath the waves.

AUGUST 23, 2019 - WOODS HOLE, MASS. - It should be a lifeless wasteland. Temperatures are barely above freezing, miles of water apply crushing pressure, and no sunlight reaches there. But the deepest parts of the ocean are actually rife with outlandish lifeforms. 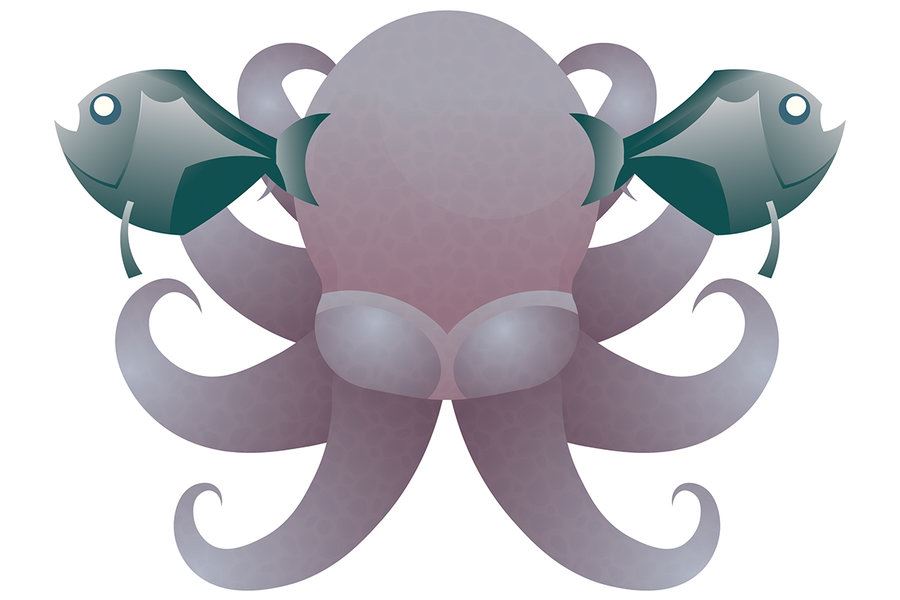 Jacob TurcotteJacob Turcotte/StaffSeven-foot-long tube worms, ghostly white snailfish, and massive crustaceans all make their homes in the forbidding depths. Single-celled organisms flourish in the unilluminated sediments. And some creatures even make their own light through bioluminescence – like the vampire squid, which ejects a sticky cloud of light-up mucus instead of ink when it’s disturbed, or the anglerfish, with a streetlamp-like lure emerging from its head.

Although the deep sea makes up about 90% of our vast oceans, it remains largely unexplored. That’s for good reason. For centuries, scientists assumed that life at such depths was impossible – and checking wasn’t a simple task. But the advent of remotely operated submersibles in the 1960s opened up deep-sea exploration.

An alien world of life has emerged as explorers have plumbed the pitch-black depths with ever-improving technologies. These mounting discoveries are dramatically widening our perspective of the oceans, and rewriting our understanding of the limits of life. They’re shaping our sense of what’s possible, and pushing us to think beyond basic assumptions – both in terms of exploring Earth and the vast reaches of space.

In the search for extraterrestrial life, scientists are turning to our own ocean for inspiration. NASA has begun to help fund some deep-sea explorations, and some astrobiologists have teamed up with marine biologists and oceanographers to probe the boundaries of biology here on Earth. Exploring the unfamiliar environments in the deep sea reveals tangible guideposts for exploring space. But it also emboldens scientists to stretch their thinking and open their minds to the impossible.

Scientists have barely scratched the surface of fully understanding the full extent of life on Earth. 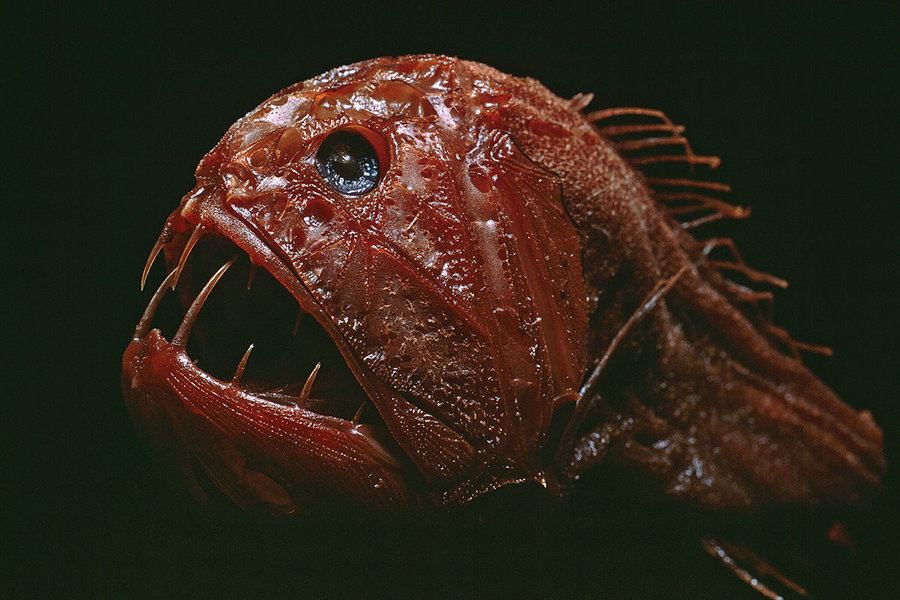 Fangtooth, Anoplogaster cornuta, is a deep ocean predator. Its long teeth make sure it does not miss a meal of fish, squid, or shrimp.Newscom“Every time we go to the deep sea, in a place that nobody has been, most of the species, especially small things, have never been seen or described before,” says Lisa Levin, a marine ecologist at the Scripps Institution of Oceanography in La Jolla, California. “We’re still really at the front end of exploration. We’ve barely scratched the surface, so to speak, or the bottom.”

Four decades ago, oceanographers discovered something that blew biology as we knew it out of the water.

Scientists had long thought that all life was sustained by a photosynthesis-based food chain: Some organisms convert sunlight into food, and other organisms eat those photosynthesizing organisms. So, the thinking went, any life at the bottom of the ocean where no sunlight reached had to be munching on dead organic material that fell down through the water, and there probably wasn’t enough food to sustain large, complex animals.

But researchers were in for a surprise.

On Feb. 15, 1977, a U.S. research team dropped a remotely operated vehicle into the Pacific Ocean north of the Galápagos Islands. They were searching for spots where heat from volcanic activity seeped out of the seafloor. The ROV sank over 8,000 feet, then scientists used its camera and temperature sensor to search for the warm vents. Most of the images the ROV took revealed what the scientists expected: barren lava flows. But at this same spot where the temperature spiked, a dense cluster of hundreds of white clams and brown mussel shells appeared. 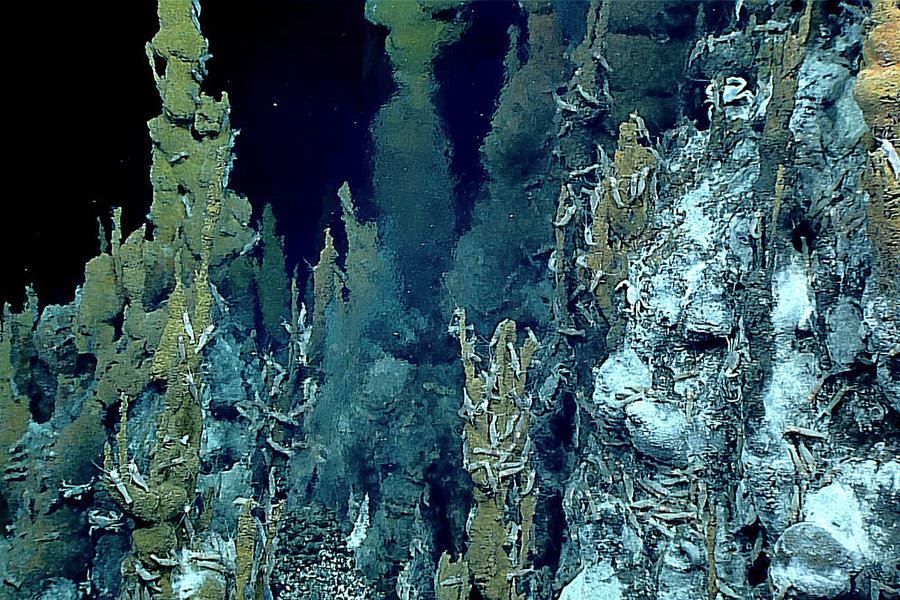 Hydrothermal vent chimney. In the center of the photo, you can see the vent fluid, which appears like dark smoke due to the high levels of minerals and sulfides contained in the fluid. Look closely, and you will also see the chimney is crawling with Chorocaris shrimp and Austinograea williamsi crabs.NOAA Office of Ocean Exploration and ResearchA few days later, three scientists climbed in a submersible called Alvin and plummeted down to the spot to check it out for themselves. Sure enough, they saw clams that were nearly a foot long, white crabs, giant white tube worms with bright red tops, and a purple octopus. At those pitch-black depths, none of those creatures should’ve been there.

But how could such a vibrant ecosystem survive so far from sunlight? Researchers realized that there are microbes that, instead of using light to grow, use chemicals from the rocks at hydrothermal vents in a process called chemosynthesis. And other creatures can eat those microbes, filling out the ecosystem.

“When hydrothermal vents were discovered in 1977, it very much flipped biology on its end,” says Julie Huber, an oceanographer who studies life in and below the seafloor at Woods Hole Oceanographic Institution (WHOI) on Cape Cod. “People knew that organisms could live off of chemical energy, but they didn’t imagine they could support animal ecosystems.”

Scientists like Dr. Huber have continued to study those chemical-munching microbes. And it turns out, she says, a diverse set of microbes can be really good at making a living where the sun doesn’t shine. They make use of the chemicals available to them, even at some of the harshest vents, known as black smokers.

“The possibilities are much bigger than we probably thought they were even just 15 or so years ago,” Dr. Huber says. “It’s really hard to predict what might be possible sometimes, because we don’t really know what exists yet.” 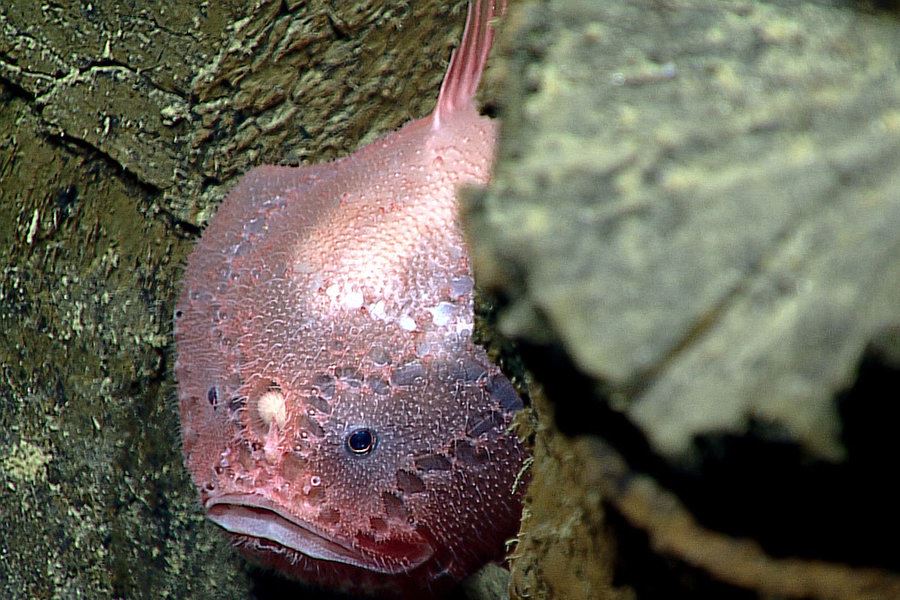 A deep-sea anglerfish living within the pillow basalts. You can see its round lure in between its two eyes. This fish is an ambush predator that waits for prey to be attracted by the lure before rapidly capturing them in a single gulp.NOAA Office of Ocean Exploration and ResearchThe discovery of life at deep-sea hydrothermal vents taught scientists like Dr. Huber to question assumptions about biology – and generated excitement about deep-sea biology and life on the fringe.

“This is the science of us. We are, of course, life. We are biology,” says Kevin Hand, an astrobiologist at NASA’s Jet Propulsion Laboratory in Pasadena, California. “And we don’t yet know that biology works beyond Earth,” or how it might work.

Deep-sea life in the Milky Way?

Robotic envoys circling Jupiter and Saturn in recent decades have made startling discoveries that honed astrobiologists’ interest in Earth’s oceans. Jupiter’s moon Europa and Saturn’s moon Enceladus probably have vast liquid water oceans sloshing beneath their icy crusts. Dr. Hand calls that revelation “one of the most exciting and profound discoveries that we’ve made in the past roughly half-century of exploring our solar system.”

But it was the knowledge that hydrothermal vents could sustain life where the sun doesn’t shine that further piqued astrobiologists’ interest in those icy moons. Sunlight likely doesn’t reach below the thick ice sheets coating the moons. So if the chemically rich vent environments exist on those alien ocean worlds, they could fuel deep-sea life there, too.

“The best chance we have of demonstrating whether there’s life beyond Earth in the next human generation would be by going and exploring the ocean floor of these planets that are right here in our own solar system,” says Chris German, a deep-sea oceanographer at WHOI who is at the forefront of oceanic collaborations with NASA. 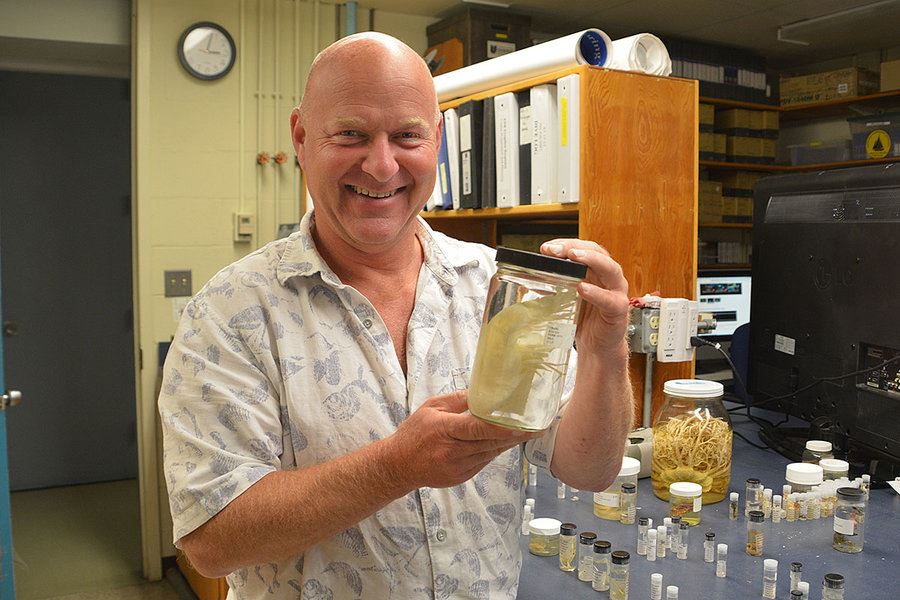 Deep-sea biologist Tim Shank shows off Alicella gigantea, the biggest amphipod ever discovered. It lives in deep ocean trenches. The lab bench behind him is strewn with specimen jars containing other creatures of the deep.Eva Botkin-Kowacki/The Christian Science MonitorOn Monday, NASA approved the next phase of development for the Europa Clipper mission, which would take a closer look at Jupiter’s moon.

Astrobiologists aim to keep an open mind when searching for extraterrestrial life, but they still need some parameters to work with. Life on our planet is made up of the same basic building blocks. So in an effort to define some sort of boundaries of biology, many astrobiologists turn to Earth’s most extreme environments.

Life at the extremes

Welcome to the hadal zone: the deepest part of the ocean. It is made up of trenches and troughs, extends 3.7 to 6.8 miles below the surface, and is named after Hades, the Greek god of the underworld.

There, scientists still think the only source of food is detritus raining down from above. But in the patches where the dead material collects, there’s much more than microbes. Many animals have flourished.

And food isn’t the only limiting factor for animal life. The weight of miles’ worth of water should be crushing. Animals should struggle to grow big. But Dr. Shank holds up a jar with what looks like a flea longer than a foot in it. Alicella gigantea is the biggest amphipod ever discovered – and it lives in the deep ocean trenches.

But how can animals survive such bone-crushing pressure?

Pressure does seem to be a key limit for some life. Dr. Shank and his colleagues’ research suggests that animals with spines can’t go any deeper than 8,200 meters (about 5 miles). Yet those giant amphipods and other creatures with exoskeletons seem to fare better at depths.

Establishing pressure limits for creatures on Earth could greatly help astrobiologists know where to look on other ocean worlds. Pressure seems to be a limiting factor for multicellular organisms, like plants and animals. But scientists have found microbes pretty much everywhere, even in the most extreme environments. So that’s what astrobiologists say they’re most likely to find in space, too.

Still, there are many more deep-sea environments to plumb the boundaries of life. Under the waves are trenches, canyons, plains, sea mounts, continental margins, hydrothermal vents, volcanoes, methane seeps, and mid-ocean ridges that run like mountain ranges through the ocean.

“They’re just as different as if you thought about forests and deserts and grasslands and mountain ranges on land,” says Dr. Levin. And, given how difficult it is for humans to explore those depths, there’s probably still a lot more to discover. Already, life has been found in extremely harsh environments like methane seeps and low-oxygen zones, too.

“We still keep discovering new ways of living in the ocean, and new forms of life, and new microbial capabilities that nobody knew about,” she says.

The door to Dr. German’s office is plastered with stickers from ocean exploration missions and NASA missions. A large map of the world stretches across part of his office wall.

Gesturing to the vast blue space filling the page, he says, “imagine if you were an alien coming from outer space.” Most of what you’d see as you arrived would be water. So if you wanted to meet Earthlings, he says, you might think the ocean was the best place to look.

In June, NASA announced it will fund an interdisciplinary project Dr. German has been devising for years: the Exploring Ocean Worlds (ExOW) project. Dr. Hand and Dr. Huber are co-investigators on the project. But they won’t just look outward. That exploration starts on Earth – and may give us a new lens on our own planet.