by Ethan Ton from San Diego, California in United States

To the Civil Rights Movement, he was a traitor. To the supremacists, he was a monster. But to the people, he was an inspiration. Nat King Cole lived as an African-American musician whose works led him to be one of the biggest influences to musicians today. Starting off as nothing but a Los Angeles refugee after a failed tour, he was soon recognized for his pianist and vocal talents and became a hit all throughout the world. Racism shadowed Cole throughout his career, yet he chose not to take action against it, ignoring the hatred towards him. A hero must possess the ability to be brave, willing to reach heights that nobody has reached before and stand against their fears. A hero must be humble, thinking of others before themselves and willing to accept reality. A hero like that can only be Nat King Cole, a man who showed humility and bravery throughout his life.

Cole posing for a photoallmusic.com 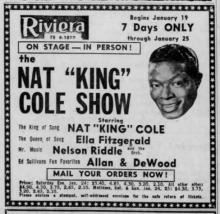 Cole’s bravery showed others that a black man could do just as much as anyone else. Bravery was a necessity for Cole to reach his position in his career; Cole’s reputation wasn't special to the average person, yet it was a miracle to other minorities: “Cole achieved a level of popularity and success that was nearly unheard-of by African American performers before him. He helped to open doors of mainstream music to other African American entertainers” (Miller). At the time, Cole had achieved a feat unheard of to African Americans— becoming a mainstream musician. He showed minorities how much they could do and, though racial discrimination was fierce, that they could still live in happiness and prosperity. He inspired the segregated, which allowed others to believe they were just as equal as anyone else. Early on in his career, Cole hosted the first national African American television show which soon became popular among the public. However, since no major company wished to support an African American broadcast, the show was soon canceled, upsetting Cole: “This incident was one of the few times that Cole was outspoken about race, accusing advertising agencies of being afraid to sponsor a show hosted by an African American” (Miller). Cole had already been willing to make a difference in the world and show that an African American could host a television show in an equivalent manner, but also to risk his career as an entertainer. By doing so, he would take action by confronting those that discriminated against him because of his color. He stood up to racists while others wouldn't dare to do so, but also risked his fame to say what he believed was wrong. 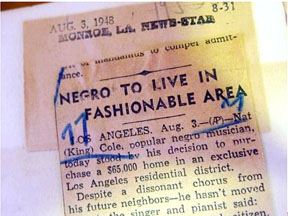 News article on Cole's new housing choicelarchmontchronicle.comYet if the hero’s humility hadn't prevailed, Cole would have never lived through his life as easily as he had. After he was attacked on stage by a group of white supremacists during a performance in Alabama, Cole was interviewed on his views about these racist actions: “African Americans, on the other hand, rebuked him for his unsupportive comments about racial integration he made after the show. Cole claimed that he was an entertainer, not an activist” (Nat King Cole). Instead of getting upset, he argued that he wasn't fit to fight against this hatred and that he was only there to work as an entertainer and not a political figure. After moving to an exclusively white neighborhood, Nat was constantly under the attack of his neighbors and other racists: "The city had strict housing covenants preventing minorities from buying homes in white neighborhoods. Cole was prepared to challenge the covenants in court, but opposition was dropped before it became necessary. After he moved in, however, his home was vandalized and gunshots were fired through one of the windows" (Miller). While assaulted in his own home, Cole didn't choose to let out his anger against the other residents for their racist actions, but instead, chose to take things peacefully. He would simply ignore the racism and continue on with his life.

Nat King Cole is portrayed as a hero for his humility and bravery. Through Cole’s bravery, he was able to show others that people of minority groups could do just as much as anyone else could. Through Cole’s humility, he was able to show that violence and hatred are not the only ways to solve a problem. He showed musicians that they too can be great despite any obstacle. “Nat Cole’s ‘unforgettable’ voice, with its honeyed velvet tones in a rich, easy drawl, is one of the great moments in music, and saw him accepted in a ‘white’ world” (About Nat King Cole). Nat King Cole inspires all of us to strive towards our dreams, no matter what anyone says, and to act forgivingly. Though some saw him as a monster, a traitor, he will always be my hero.

U.S. Department of the Interior, <www.nps.gov/people/nkcole.htm>