by Lauren from San Diego 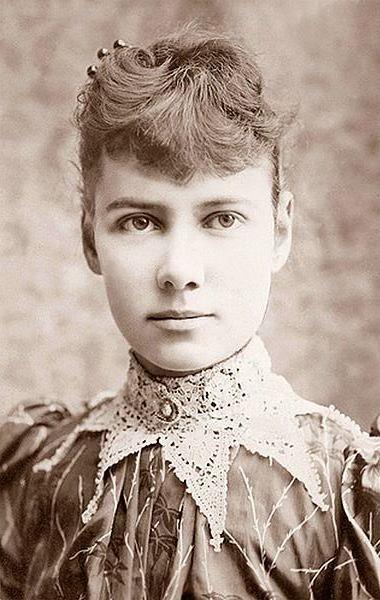 https://commons.wikimedia.org/wiki/File:Nellie_Bly_2.jpgCorbis [Public domain]During the 1880s, women struggled to overcome gender discrimination, especially in the workforce. Consequently, there were limited professional opportunities such as teacher, factory worker, or a housewife. However, Nellie Bly, a young woman from Pennsylvania, dreamed of becoming something else, a writer. “While the odds were not exactly in her favor, Bly was able to make a profession out of writing due to her extraordinary personality and determination” ("Elizabeth Cochrane Seaman"). Bly took a stand for women’s rights soon after reading an article entitled: “What Girls Are Good For.” The article claimed that women like Bly, who wanted better jobs and fair wages, were useless to the workforce. Bly responded in a letter back to the newspaper editor arguing that women were worthy of men’s professions but society kept them from proving themselves. This landed her a job as a journalist, making her dream of becoming a writer come true. During her new-found career, Bly gained worldwide fame as America’s first female reporter. Her heroic undercover reports of hazards in factories and the awful working conditions women and children faced brought necessary reforms around the world. Nellie Bly is more than a reporter, she is an inspiration. Her courageousness to report abusive conditions brought about humanitarian reforms and her determination to cover such stories, despite the dangers she personally faced for the betterment of others makes her a true hero.

Nellie Bly’s courageousness to put herself in dangerous situations to report the truth brought reforms to the world. However, despite the advancements brought about by her work, her employer was at great risk of losing advertisement sponsors from local businesses. Consequently, Bly was given more trivial assignments such as reporting on fashion and social gatherings, which were topics more fitting for a female. Bly was not satisfied with this work and grew restless. She was determined to uncover the secret stories hidden amongst society by finding every possible way to reach the truth: “To get an inside view of the justice system, she pretended to commit a robbery and found that female prisoners were searched by male officers because no women were employed by the jail. She also exposed a fraudulent employment agency that was taking money from unsuspecting immigrants, a health clinic where unqualified doctors experimented on patients, and a lobbyist who had successfully bribed a number of state politicians” (“Elizabeth Cochrane Seaman”). Bly partook in many risky and dangerous things for which she could have gotten into trouble with the law, yet this factor was unimportant to her. She was willing to risk her life to uncover the truth about business and social injustices around the world. Without her fearlessness, the world might not have discovered the corruption in society. One of her most famous ventures was going undercover as a patient at a mental institution known as Blackwell’s Island. During the time she spent there, Bly discovered the horrible conditions and treatments: “The endless days at the insane asylum known as Blackwell's Island were wracked by abusive attendants, spoiled food, too little heat, and a ritual of freezing-cold baths: "Suddenly I got, one after the other, three buckets of water over my head... into my eyes, ears, my nose and my mouth. I think I experienced the sensation of a drowning person as they dragged me, gasping, shivering and quaking, from the tub..." (Spencer). Nellie Bly endured the harsh treatment and torture at Blackwell’s Island to expose the truth of what happened inside of the institution. Her courageousness at the hospital led to an uprise of angry people that helped to eradicate the asylum so the mental patients could receive proper treatments. While Bly was determined to shed light on the poor treatment of patients inside the asylum, she was also fearful of the possibility that she might not be able to get out once inside. If not for her bravery, people would have never known about the poor conditions and cruel treatments within the mental hospital. Nellie Bly was unlike other reporters because she was willing to risk her life for the true story, rather than back down into the shadows, ignoring that they ever existed. Her courageousness created a better life for mistreated people as she eradicated the malpractices committed in the world. 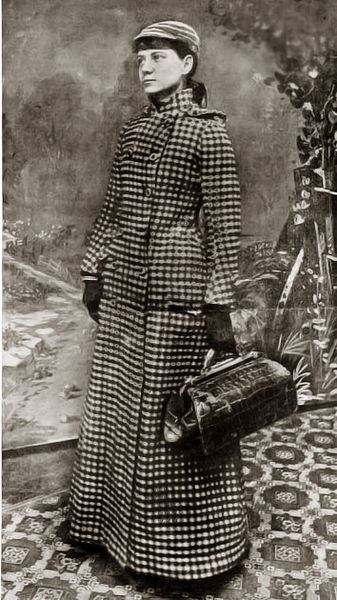 https://commons.wikimedia.org/wiki/File:Nellie_Bly_journalist.jpgHistorical and Public Figures Collection [Public domain]Nellie Bly’s determination to work as an undercover journalist, despite the prejudice she faced as a woman, led her to fight for what she wanted. With her new passion for writing, Bly searched for a job as a journalist: “No one would hire a woman reporter, not even one with experience. Finally, Bly stationed herself in The World offices and refused to leave until Pulitzer agreed to see her” (“Nellie Bly”). Bly is the epitome of perseverance. She realized it was almost impossible to land a job as a nurse, let alone a journalist. However, this did not stop her from trying, she would not take no for an answer. Using her determination, she found a way to become a writer, fighting for a better job. Her persistence represents the strong-mindset of a hero. Bly continued to struggle with gender inequality throughout her career, getting less significant stories to cover versus her male counterpart. When she came up with an exciting story to travel around the world in less than eighty days to beat the record of Phileas Fogg, the main character in the novel Around the World in Eighty Days, her editors loved the idea: “But women rarely traveled alone in those days, much less all the way around the world. They decided to send a man instead. Bly was furious and threatened to find another newspaper who would send her on the trip. Her editors finally agreed to let her go” (“Nellie Bly”). As a woman, Bly was treated inferior to the men at her job. She was judged quickly to be unable to travel because she was female, making her seem of lower stature to men. Bly took a stand on their gender discrimination and absurdity to send a man in her place. She argued that she could do better than a man could by returning sooner than eighty days. Bly stopped at nothing and finally got her editors to agree to let her go. Her determination motivates others to fight for what they believe in and to never give up, even when it seems hard to accomplish.

Nellie Bly’s fearlessness and perseverance inspired women throughout history to stand up for themselves while her journalism made a positive difference in the world. Bly would not let the norm for women in society keep her from writing what she was passionate about. Even though she fought through obstacles which seemed nearly impossible to overcome, she would not give up on her dream. Her determination to land exciting stories signifies how women can push through societal norms to become what they wish. She pushed the boundaries of what people considered to be socially acceptable as a way to uncover the unjust conditions women worked through. Her work led to new things by opening the minds of many people to reform, which changed the treatment of women. Nellie Bly inspires me to persevere in life, even when I face obstacles. As a self-driven person, I admire the grit of those who want to make a difference in the world by pushing through boundaries to achieve something greater. Bly reinforced for me that I can fulfill my dreams so long as work hard and persevere through challenges. As people, we should stand up for others and fight to have a better life in the world. Even today, women still face challenges and unfair treatment in the workforce because of their gender. Just like Nellie Bly, if we are determined to make a change, together we can unite to break through any barriers.