by Staff Associated Press from ATLANTA 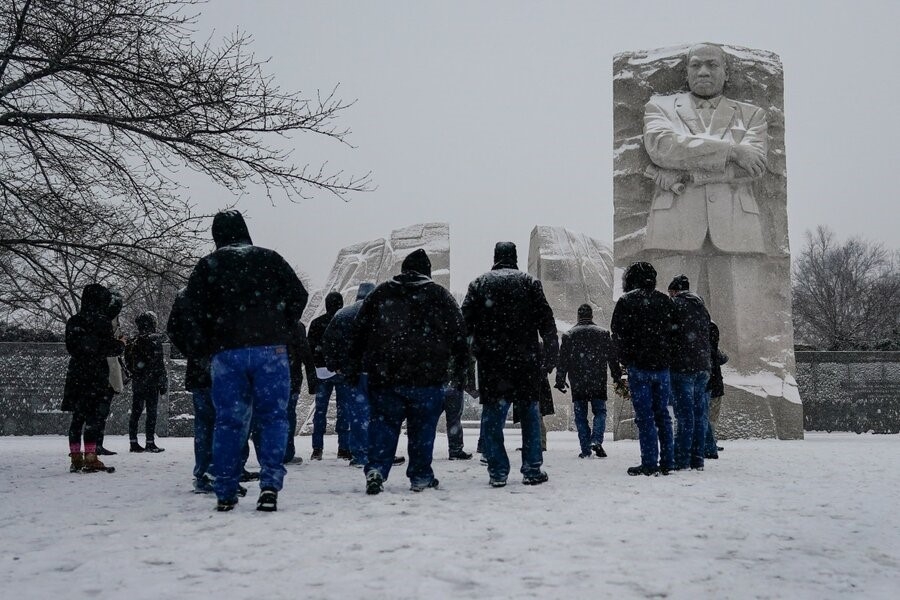 Americans must commit to the unfinished work of Martin Luther King Jr., delivering jobs and justice and protecting "the sacred right to vote, a right from which all other rights flow,” President Joe Biden said Monday.

Martin Luther King Jr. Day is a moment when a mirror is held up to America, the president said in a video address.

Mr. Biden has pushed Congress to pass two major pieces of legislation, the Freedom To Vote Act and the John Lewis Voting Rights Advancement Act, which aim to broaden access to the ballot box, raise the bar for states with a recent history of discrimination to change voting laws and protect election officials from undue partisan influence. Both bills passed the House this past week but are not expected to pass the evenly divided U.S. Senate.

Major MLK Day events Monday included marches in several cities and the annual Martin Luther King Jr. service at the slain civil rights leader's Ebenezer Baptist Church in Atlanta, where U.S. Sen. Raphael Warnock is the senior pastor. Pews have been packed by politicians in past years, but given the pandemic, many offered pre-recorded speeches instead.

Monday would have been the 93rd birthday of the Rev. Martin Luther King Jr., who was just 39 when he was assassinated in 1968 while helping sanitation workers strike for better pay and workplace safety in Memphis, Tennessee.

King's eldest son criticized Mr. Biden and Congress as a whole on Monday for failing to pass voting rights legislation, even as 19 Republican-led states have made it harder to vote in response to former President Donald Trump’s false claims about election-rigging.

“You were successful with infrastructure, which is a great thing -- but we need you to use that same energy to ensure that all Americans have the same unencumbered right to vote,” Martin Luther King III said.

Senate Republicans remain unified in opposition to the Democrats’ voting bills. Biden described their stonewalling as part of “a true attack on our democracy, from the Jan. 6 insurrection to the onslaught of Republican anti-voting laws in an number of states.”

Sen. Tim Scott of South Carolina, the Senate's Black Republican, countered with the first of a series of King Day-themed videos he said would emphasize positive developments on civil rights. Senator Scott sidestepped criticism about GOP actions and accused Democrats of labeling his party members as racists.

“To compare or conflate people who oppose his positions as being racists and traitors to the country is not only insulting and infuriating, it’s dead wrong,” Senator Scott told The Associated Press.

“Martin Luther King Jr.’s legacy, and the celebration of his life, and the contributions of African Americans to this country, is a very important time for us to highlight the progress that we’ve made and also some of the issues that stand in the way of even more progress,” Senator Scott said. “I decided that the best way to do that is not just to hear from me but to actually listen to other folks throughout the community.”

Senator Warnock, now running for reelection as Georgia's first Black senator, said in his speech to the sparse crowd at Ebenezer Monday that “everybody loves Dr. King, they just don’t always love what he represents."

“Let the word go forth, you can not remember Dr. King and dismember his legacy at the same time,” Senator Warnock said. “If you will speak his name you have to stand up for voting rights, you have to stand up on behalf of the poor and the oppressed and the disenfranchised.”

King, who delivered his historic “I Have a Dream” speech while leading the 1963 March on Washington and was awarded the Nobel Peace Prize in 1964, considered racial equality inseparable from alleviating poverty and stopping war. His insistence on nonviolent protest continues to influence activists pushing for civil rights and social change.

The U.S. economy “has never worked fairly for Black Americans — or, really, for any American of color,” Treasury Secretary Janet Yellen said in a speech delivered Monday, one of many by national leaders acknowledging unmet needs for racial equality on Martin Luther King Day.

Ms. Yellen referred to King’s famous speech in remarks she recorded for delivery at the Rev. Al Sharpton’s National Action Network breakfast in Washington, noting the financial metaphor he used when describing the founding fathers’ promises of equality.

King said on the steps of the Lincoln Memorial that “America has defaulted on this promissory note insofar as her citizens of color are concerned.” He called it ”a bad check, a check which has come back marked insufficient funds. But we refuse to believe the bank of justice is bankrupt!”

“It is compelling rhetoric, but I also think Dr. King knew it was a more than a metaphor. He knew that economic injustice was bound up in the larger injustice he fought against. From Reconstruction, to Jim Crow, to the present day, our economy has never worked fairly for Black Americans – or, really, for any American of color,” Ms. Yellen said.

She said the Biden administration has sought to ensure that no economic institution fails to work for people of color. Equity was built into the American Rescue Plan so that communities of color would get pandemic relief, and Treasury is injecting $9 billion into Community Development Financial Institutions and Minority Depository Institutions traditionally poorly served by the financial sector.

“There is still much more work Treasury needs to do to narrow the racial wealth divide,” she said.

Atlanta's planned events also included a march, a rally and a voter registration drive by the Georgia Coalition for the People’s Agenda and Youth Service America.