The dictionary defines a hero as any man renowned for his courage or feats of valor, or any man admired for his character, ideals, or accomplishments. But a hero is much more than just those things. A hero must have heart, he must be able to stand up for something he believes in, he must be caring and brave. It is not fair to call just anyone a hero. A hero must be someone special to you and someone you admire. A hero is a champion, a conqueror, an idol, and your Superman. A hero is not just anyone. A hero is special.

Hunter 'Patch' Adams was born into a strict military-like family. His father ran the household like a military institute and they were constantly moving. Due to his family's frequent moves to diverse places, he learned to accept differences in people and to quickly make friends. Although he was never close to his father, he was very close to his mother. She instilled in him a sense of humor and made him want to learn. She gave him love and attention. She was very special to him. As Hunter started school, he became known as the class clown. He goofed off all the time because he got so bored with learning things that were too easy and simplistic for him. Eventually, he became interested in the diverse world of science and math. He won many small science fairs and entered, and won, the All-Europe science fair. Soon after winning one of his last science fairs, he went to spend a week with his father, who had been constantly drunk or too busy for him and his brother before. During this time, his father told him of the wars he had fought in and of his best friend who had died while saving his life, subjects which he never even talked about before. He and his father became very close during this week. A few days after, his father died suddenly of a heart attack.

Soon after, Adams and his family moved to Northern Virginia to live with his uncle and aunt for a few months before moving to West Virginia a little later. Adams became very close to his uncle and his uncle became a second father to him. He went to school and because he was in a racist town, he stood out as a person who loved everyone no matter what their skin color. Things got better for him. He started to date his first girlfriend, Donna. He dated her for quite some time. Right before he graduated, he developed ulcers in his stomach and he began to take medicine that made him sleepy most of the time.

His girlfriend inevitably broke up with him in his freshman year in college, and then, right around the same time, his uncle committed suicide. He dropped out of college and became dreadfully depressed. He was convinced he was still in love with Donna, and he wanted her back. He became obsessed with suicide. He would go and sit on the edge of a cliff almost everyday, and he would write to or about her. He was convinced that he would jump as soon as he finished, but luckily he was too wordy.

He went to his mother right after a terrible visit with Donna, and he told her that he had been trying to commit suicide and that he needed to be checked into a mental hospital. While in the hospital, Adams made many different friends. The patients in the hospital changed him, especially one of them. One of the patients, who was suffering from loneliness, made Adams realize that he was loved and he was not lonely; he had friends. It is said that this patient was the one who gave him the nickname Patch. (There is another story that says that Patch gave himself the name, Patch, because he wanted to forgo any evidence of his southern ancestry.) Also in the hospital, he realized his passion; healing people with laughter.

When he got out of the hospital, he knew that he wanted to help other people. He applied to med school and they advised him that before he enrolled that he should get his life back together. He eventually decided to try to enroll again after getting a job for awhile. He finally entered pre-med school in '64 and then, three years later, he entered med school at Medical College of Virginia. He loved to go and visit the hospital patients. He would make them laugh and do the funniest antics around them. His professors did not like his behavior, probably because of its uniqueness and non-seriousness.

Patch went on to start making his one dream into a reality. He believed that the medical system was twisted and that it cheated poor people. So, he decided that he wanted to build a hospital. But his dream was for a hospital back home in West Virginia, where he would prove his methods in day-to-day practice. At the Gesundheit Institute, as he calls it, doctors would work for peanuts, and patients would never be billed. After much fund-raising, his dream started to become a reality. His Gesundheit Institute is not completely perfected, but it is up and running. One person said of the Institute: "There, amongst beautiful mountains, hardwood forests and waterfalls, Gesundheit advocates are constructing a wholistic rural hospital and healthcare community based on the vision of what healthcare should be like. That means patient care where laughter, joy and creativity will be an integral part of the healing process. Healthcare will be provided without cost and doctors will carry no malpractice insurance. Doctors and patients will relate to each other on the basis of mutual trust, and patients will receive plenty of time from their doctors. Allopathic doctors and practitioners of alternative medicine will work side by side." Although he does not run it anymore, he still talks about it and tries to raise money for it.

Patch's theory on healing is definitely different. He believes that laughter is the best cure. He loves to go from hospital to hospital making people laugh and teaching regular doctors how to be funny for their patients. He "thinks every doctor should be a heart specialist -- a merry heart, that is."

Patch could be considered the most useful clown of the century. He uses his clown-like attitude for good. He has helped people feel and/or get better, he has stopped fights in the streets by just walking around acting and looking like a clown, and he has made an unforgettable impression on many. He is so compassionate and has never once had to give one of his patients a tranquilizer or psychiatric medication. Silliness is one of his virtues and he thinks that every doctor should possess it.

Hunter "Patch" Adams has been a physician for nearly 30 years, but he has been a clown for almost 40. He lives to make people laugh and feel good. He says that he is looking for a world where love will no longer be extraordinary, and he thinks that the role of a clown and a physician are the same: "to elevate the possible and to relieve suffering." Patch has been to many different countries with his clowns, trying to work his charms on the many different patients and underprivileged people of all shapes and sizes. He says that living in clown clothes is his gift to a world that he thinks is depressed, lonely, and lacking compassion.

Patch Adams is an incredible man, and one that I truly admire. He is definitely NOT perfect, but he has accomplished so much and has more than just a good heart. He is special and everybody should know about him! 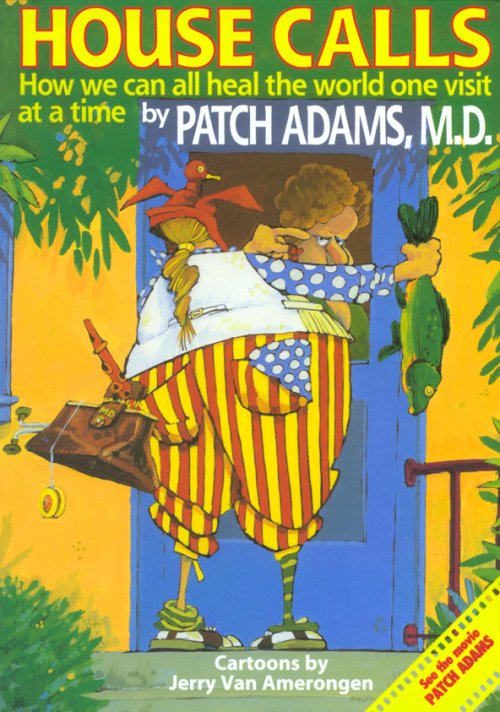 House Calls: How We Can All Heal the World One Visit at a Time
Patch Adams