How well the cry for Liberty, and the reverse Disposition for the exercise of oppressive Power over others agree, I humbly think it does not require the Penetration of a Philosopher to determine.

Phillis Wheatly is remembered as the first published African-American poet. She was born in Senegal in 1753, and at age eight was kidnapped and brought to Boston by slave traders. In Boston, she was sold to John and Susannah Wheatley.

Educated and encouraged in her writing by Susannah Wheatley, Phillis Wheatley published her first poem in 1770, at age 17. Wheatley went on to publish many poems, generally dealing with religion, a popular theme of that day. She published a volume of poetry in London, and became widely known. In 1771 she was released from slavery.

As a result of her early capture and experience on the slaving vessel, Wheatley was frail and sickly for much of her life. In 1773, in an effort to improve her health, Wheatley was sent to London. On the occasion of her leaving, she wrote "A Farewell to America" and dedicated it to Susannah Wheatley. She also wrote an ode to Scipio Moorhead, who was the slave of a Boston clergyman and a painter.

Despite her privileged upbringing, and although many of her poems purport to view the African-American situation as one of redemption ("'Twas mercy brought me from my pagan land..."), the following letter, which she wrote to the Reverend Samson Occum in the March 11, 1774 "Connecticut Gazette," bespeaks her frustration with the institution of slavery. In gentle language, Wheatley pushes, ever so carefully, against her chains:

Rev'd and honor'd Sir,
I have this Day received your obliging kind Epistle, and am greatly satisfied with your Reasons respecting the Negroes, and think highly reasonable what you offer in Vindication of their natural Rights: Those that invade them cannot be insensible that the divine Light is chasing away the thick Darkness which broods over the Land of Africa; and the Chaos which has reign'd so long, is converting into beautiful Order, and [r]eveals more and more clearly, the glorious Dispensation of civil and religious Liberty, which are so inseparably Limited, that there is little or no Enjoyment of one Without the other: Otherwise, perhaps, the Israelites had been less solicitous for their Freedom from Egyptian slavery; I do not say they would have been contented without it, by no means, for in every human Breast, God has implanted a Principle, which we call Love of Freedom; it is impatient of Oppression, and pants for Deliverance; and by the Leave of our modern Egyptians I will assert, that the same Principle lives in us. God grant Deliverance in his own Way and Time, and get him honour upon all those whose Avarice impels them to countenance and help forward tile Calamities of their fellow Creatures. This I desire not for their Hurt, but to convince them of the strange Absurdity of their Conduct whose Words and Actions are so diametrically, opposite. How well the Cry for Liberty, and the reverse Disposition for the exercise of oppressive Power over others agree, -- I humbly think it does not require the Penetration of a Philosopher to determine.

Imagination! who can sing thy force?
Or who describe the swiftness of thy course?
Soaring through air to find the bright abode,
Th' empyreal palace of the thund'ring God,
We on thy pinions can surpass the wind,
And leave the rolling universe behind:
From star to star the mental optics rove,
Measure the skies, and range the realms above.
There in one view we grasp the mighty whole,
Or with new worlds amaze th' unbounded soul.

On Phillis Wheatley - Virginia Commonwealth University
Liberty! Chronicle of the Revolution - This informative site on the American Revolution contains information about Phillis Wheatley and others who contributed to the fight for independence.
Poetryfoundation.org - is an independent literary organization committed to a vigorous presence for poetry in American culture. It exists to discover and celebrate the best poetry and to place it before the largest possible audience.
The Privileged and Impoverished Life of Phillis Wheatley - A scholarly article about double meanings in Wheatley's poetry. 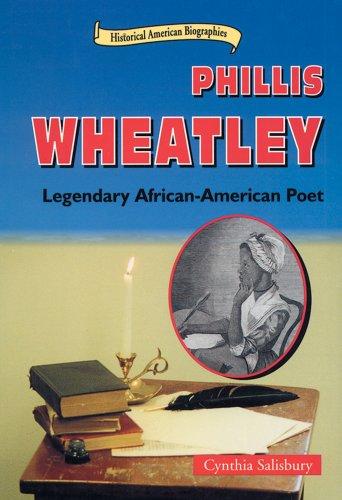