Pascal is an example of the good that young people can do to change the world around them for the better, using knowledge and goodwill as their primary tools/weapons.

by Anthony Pouw from Los Angeles, California in United States

Pascal Chukwuebuka Ngowa was born in Enugu State in Nigeria in 1990, in a country that currently ranks as the 8th worst in the world for modern slavery.  It is a country where there are more than 875,000 individuals living in slavery and where 67% of Nigerians live in poverty.

Slavery has come about because of an environment where nearly everyone is out for themselves, where everybody does what he or she wants to do, where there is no sense of respect and no sense of understanding between individuals. There is fighting between the government and individuals and among the government itself.  It is a society, that in part, does not represent the best side of Humanity.

What can be done about this? Enter Pascal Nwoga, a young man with a mission, working at the grassroots level to bring about change.

Pascal is one of my heroes because he IS doing something about turning his country into a better and happier one. He, with the help of others he has thus far made a difference in the lives of nearly 30,000 Nigerian children who have been taught about their Human Rights as well as the nearly 300, 000 people in Nigeria who have been reached with his message.

Pascal recognized that the people of Nigeria are lacking in Human Rights knowledge, and so he taken it upon himself to see that Human Rights are understood and being applied so that there can be peace, development and love in the society in which he lives.

Pascal himself grew up in an environment where people were cultural and traditional, yet his family was poor.  His parents did what they could to provide him with a loving home and a good education. Yet around him he witnessed the other side of Nigeria, children being deprived of an education and being forced into labor and even criminality in order to financially survive. Pascal felt that this was not right and this propelled him into the seminary where he wanted to learn to help his fellow man.

He attended Bigard Memorial Seminary and on completing his studies in  philosophy  traveled to neighboring Ghana to continue his education there. It was while there watching TV that he saw and an ad from Youth for Human Rights,  an organization whose mission it is is to educate and promote Human Rights around the world. He decided to contact them and find out what it was all about. And thus, learning about Human Rights and armed with their material, Pascal set off  back to his home in Enugu State, Nigeria to establish his first chapter of Youth for Human Rights.

There he started to address the problem of children being deprived of their education because of having to work to make money for their families. So, step by step, by handing out booklets and talking to many children and their parents, he started changing things.  His message was "children have a right to food, education, shelter and good health" and these are Human Rights.

He got some of his rich and poor friends involved and together they started to bring this knowledge into the schools, where children are able to learn and then apply their rights.  It is the children of today who will make tomorrow, so arming children with the knowledge of Human Rights makes it possible to have a different and better expectation for the future. 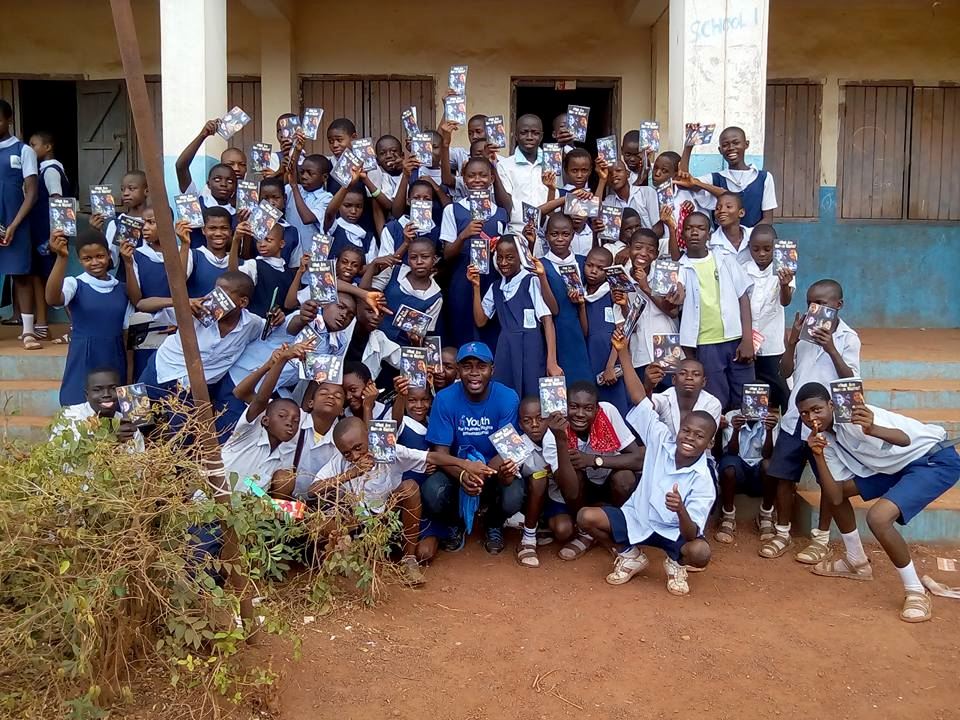 Pascal started with private schools and after successfully introducing Human Right education there,  tried to taking it into government schools. This wasn't easy, as these schools needed to get approval from the  Government first. The Government at first was not willing to embrace Pascal's efforts, yet Pascal persisted. After six months of trying, the Government finally agreed to partnering with Pascal and Youth for Human Rights and so the education of teachers and children in Enugu State government schools began.

Among these schools, he went into those where children came mainly from poor families and where some of these children were involved in gangs, robbery and prostitution as a way to get money that could not be provided by their parents. The challenge was to teach these children that they had to change for their own good and the good of society. Through his education and the Human Rights materials, these children  came to understand that by helping one another it would become good for them and society, rather than be bad for them.

There was another school where kids were being asked by their parents to go to the township to prostitute or to mingle with rich men and boys in order to bring money home. Using the message of Human Rights, the parents and children were taught that this was wrong and that there were other ways to survive. Human Rights teaches them that they have to be responsible for themselves and society, and that society does not support prostitution no matter how hard the economy is. Children had to come back home and find handiwork in a functional way in order to survive and this they did.

And so, Human Rights are now on the way to becoming an actuality in Nigeria,  thanks to the work started by Pascal.

I am a supporter of Youth for Human Rights and am truly amazed at what young people can achieve when educated and empowered.