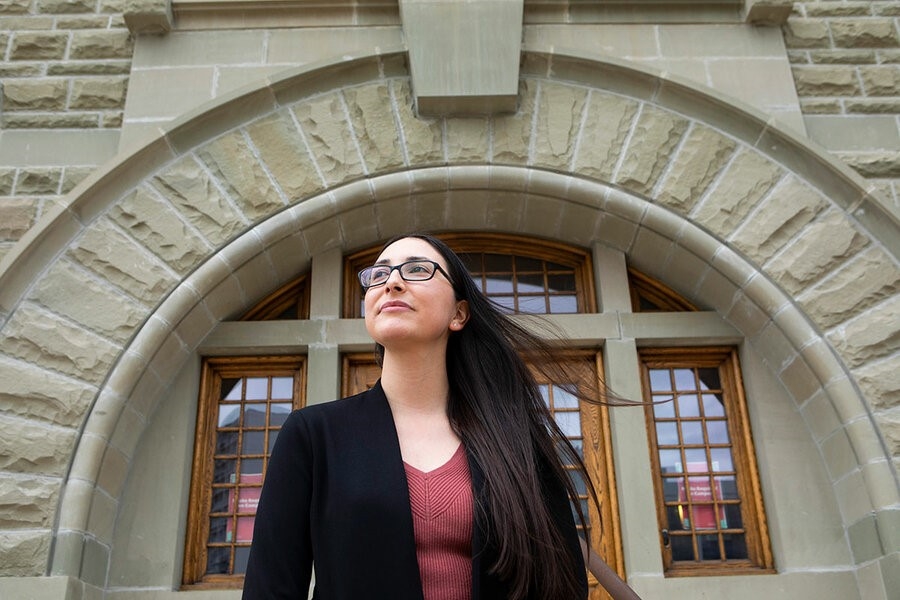 "I don't to just focus on the trauma of [Indigenous history], but on the beauty and resilience," says Christine M'Lot, an Indigenous educator in Winnipeg, Manitoba.Melanie Stetson Freeman/CSM StaffJuly 25, 2022

Christine M’Lot grew up feeling her culture was invisible.

Throughout most of her public education in Winnipeg, the Anishinaabe educator says she saw almost no representation of Indigenous voices, save for a single book assignment her senior year. It wasn’t until university that she had her first Indigenous teacher and was introduced to modern Indigenous culture – beyond the tepees and nomadic lifestyles of centuries ago, where her early social studies had stopped.

Finally seeing contemporary Indigenous culture reflected back unlocked questions she didn’t know she had, even within her own family – “because you don’t know what you don’t know,” she says. It set her on a career path that would put her on the front lines of “Indigenizing education” in Canada.

Today Ms. M’Lot, a high school teacher in downtown Winnipeg, designs classes and projects that introduce students to Indigenous culture via math or coding, architecture or essaying. But more broadly, these lessons introduce students to an Indigenous “way” of learning. Looking at the educational possibilities today for Indigenous content, she describes it as “resurgence,” fittingly the title of her new textbook.

“Resurgence” is an annotated anthology of contemporary Indigenous writers and artists, and it twins the content with a teacher’s guide that integrates Indigenous styles of pedagogy. That includes everything from learning circles that can be adapted to any age group to personal reflections by Ms. M’Lot and co-editor Katya Adamov Ferguson to inspire Indigenous methods of learning through storytelling.

“This has the ability to transform Indigenous education because of their willingness to both model themselves engaging with the text in a more holistic way,” says Sara Florence Davidson, an assistant professor of education at Simon Fraser University and co-author of “Potlatch as Pedagogy: Learning Through Ceremony.” “What they’ve done ... can be done with other texts. And so my hope is that once educators work with this text they will have an example of what is possible.”

It was the book by Beatrice Mosionier called “In Search of April Raintree,” a Manitoba classic and story of two Métis sisters and their search for identity after being sent to foster care, that Ms. M’Lot finally read her senior year. Many friends went through their entire schooling without reading any Indigenous content. They learned nothing of residential schooling, even though many were intergenerational survivors.

Ms. M’Lot’s own grandmother testified before Canada’s Truth and Reconciliation Commission, which was established in 2008 to examine the lasting impact of the country’s residential schools for Indigenous children. She recalls feeling lost at the time. “This big thing was happening. My grandma was testifying in front of people. But I didn’t really fully understand it, even though I was in high school and could have totally understood it at that time.” That story of silence is repeated across North America. 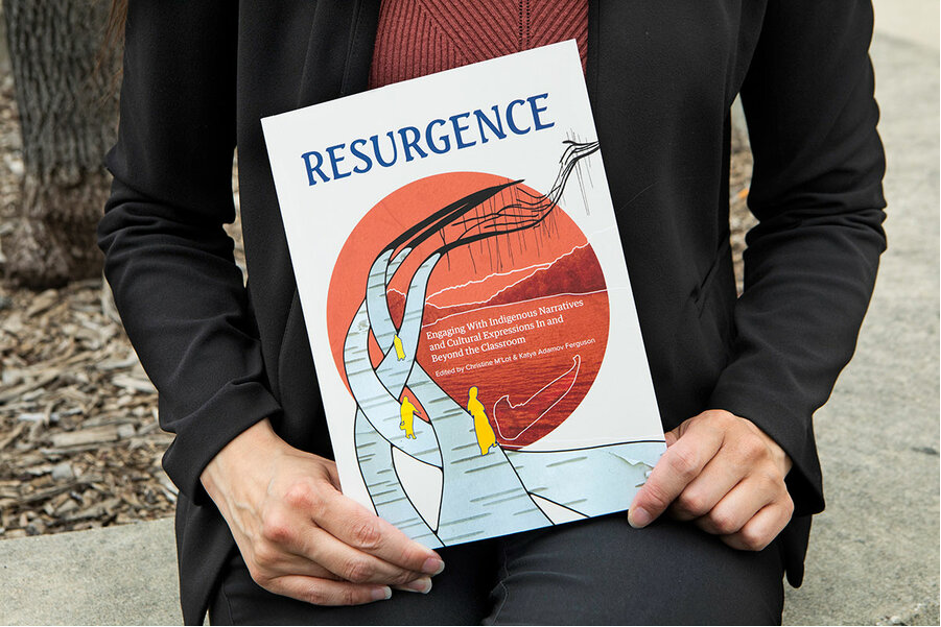 Melanie Stetson Freeman/CSM StaffChristine M’Lot’s anthology “Resurgence” encourages students to reflect on the works of Indigenous writers and artists and to connect them to their own lives.Indigenizing Education

In 2015, the commission put out a request for proposals to bring a more complete curriculum of Indigenous issues to Canadian students. As a result, the educational landscape has started to change in the past seven years, says Linda Isaac, the national director of Indigenous education, equity, and inclusion for Nelson, one of the country’s largest publishers of educational materials.

A former school principal in Toronto, today Ms. Isaac meets with Indigenous and non-Indigenous educators, community leaders, and elders across Canada, and incorporates their perspectives and styles into Nelson’s school resources in a way that makes them “authentic and culturally relevant,” she says, “and it comes from the ground up.”

A sense of empathy and justice drives this curriculum work, but so do awe and resilience, says Ms. M’Lot. While Canadian education has made strides in grappling with the truth – particularly after the revelations last year of potentially hundreds of unmarked graves at former residential schools – so much of the learning has focused on the painful past. “I don’t want to just focus on the trauma of it, but on the beauty and resilience,” she says.

And that has been a hallmark of much of her busy consultancy life that she juggles with a full-time teaching job. When she was asked to develop a math curriculum for the Manitoba Institute of Trades and Technology and its Indigenous carpentry program, she sought out a knowledge keeper known for her birch bark baskets. She attended a birch harvest, filling her notebook with ideas for lessons on unit and space, including measuring the circumference of the tree to calculate how much bark will be needed – ensuring to never take more than necessary.

In another project, she worked with Your Voice Is Power, begun as a hip-hop coding and entrepreneur program from the United States. The group brought her on board to “Indigenize” it for a Canadian audience. Students analyze song lyrics from Indigenous hip-hop artists, and then create their own song about a social justice topic.

For the textbook, the contributors were given an open assignment to present what they so chose – as long as it encapsulated “resurgence.”

Dr. Davidson, one of the contributors, considered the theme for a long time before settling on an essay titled “Beyond the Silence” about her experience painting a totem pole made by her father, Robert Davidson, during the pandemic. It was a continuation of “We Were Once Silenced,” which was raised in 1969 to celebrate a potlatch, a foundational ceremony of the Haida people that the Canadian government had banned in 1884.

Her essay talks about the responsibility she felt, particularly after losing her brother, to keep her family’s knowledge alive. “I had this really transformational experience of painting the pole,” she explains in an interview. “And then when my brother died, I went back to that experience and thought about it differently because so much of my father’s knowledge and expertise as an artist had been passed on to my brother. What happens with all of that knowledge? ... How do we make sure that it gets carried forward? And how do we carry this on so that it’s possible in future generations? And what is our responsibility in this particular moment to ensure that resurgence is possible?”

Students reading her essay are then guided to connect the text to themselves, the larger community, and what most interests them. It moves the classroom away from what Ms. M’Lot calls “factory-style education,” where a teacher disseminates the knowledge and the students listen in classes organized in silos.

“I think that’s something that non-Indigenous teachers struggle with the most,” she says. “They can be experts on content. But it’s the process that I think is difficult to teach.”

“I think learning about Indigenous topics in an Indigenous way can facilitate anti-racist work. I think when you gain empathy for people it’s really hard to discriminate against them and to hold racist beliefs,” she adds. “But I just want to really normalize [this style] for people. I’d like this not to be Indigenous education, but just education.”