Make them laugh: India’s Dalit comics challenge caste, one joke at a time 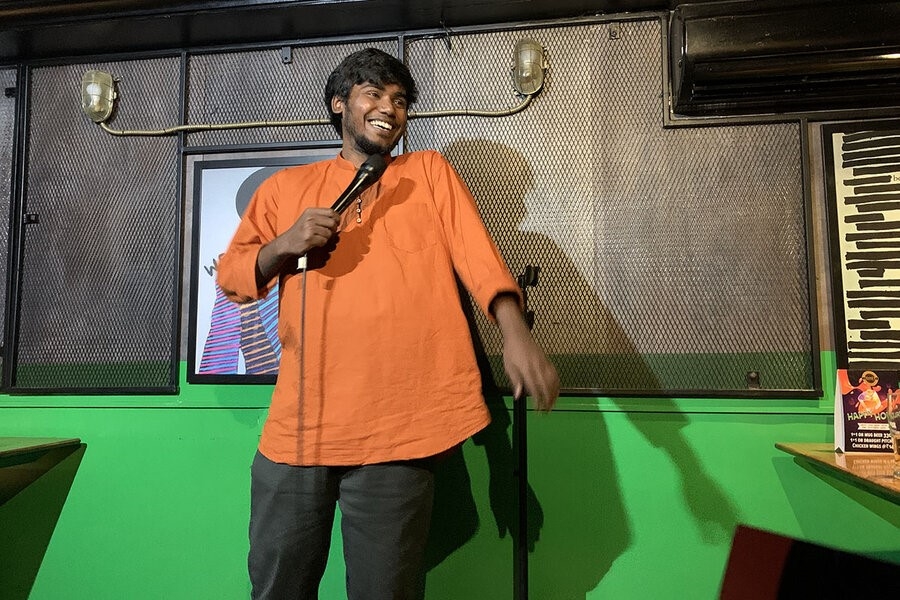 Dalit stand-up comedian Manjeet Sarkar performing at a cafe in Bengaluru, India, on Sept. 10 2022. "Being on the stage gives me a sense of liberty and equality," says the comedian, who uses humor to challenge the Hindu Caste system.Qadri InzamamOctober 17, 2022

Late one recent Saturday night, stand-up comedian Manjeet Sarkar walked up to a makeshift podium inside a jampacked cafe in the posh city of Bengaluru. Mr. Sarkar is a Dalit, a community regarded as “untouchable” by upper-caste Hindus. The audience welcomes him with loud applause, and once everyone settles in, Mr. Sarkar cracks his first one-liner: “If anyone does not laugh at my jokes, I touch them.”

The crowd loves it.

The quip takes aim at the Hindu caste system, a rigid, centuries-old hierarchy that places Dalits like him on the lowest possible tier, below Brahmins, Kshatriyas, Vaishyas, and Shudras. Old laws called for their physical and social segregation, and although the practice of “untouchability” has been outlawed in modern India, anti-Dalit violence and stigma prevail across the country.

For another half-hour, Mr. Sarkar makes a largely upper-caste audience laugh at jokes about the discrimination Dalits face and the classism that exists in elite Indian circles.

He is one of a small but growing number of Dalit comedians breaking into India’s Brahmin-dominated comedy scene. Onstage, they’re finding that examining caste through humor not only makes for better comedy, but is also personally empowering.

“I can convey my thoughts without thinking twice whether I will be mob-lynched or beaten up by someone,” says Mr. Sarkar. “Being on the stage gives me a sense of liberty and equality.”

Caste can be funny

The culture of independent stand-up comedy emerged in India in the early 2010s, fueled by the rise of YouTube and influenced by comedians in Britain, Canada, and the United States. Back then, only upper-caste people could afford to work unpaid shows and open mics, and even nowadays, when there’s more money to be made, that’s who dominates the comedy circuit.

Madhavi Shivaprasad, an independent researcher based in Bengaluru who has also published a paper on caste and stand-up comedy in India, says that like other art forms, Indian stand-up has historically been very exclusivist. While many upper-caste comedians identify as feminists and progressive, they “do not acknowledge the caste barrier they are responsible for putting up” in the industry, she says.

In her paper, Ms. Shivaprasad argues that comedians have a special responsibility to challenge castism, writing that “danger lies in the possibility that discriminatory attitudes get sanctioned and reinforced, particularly through the guise of humour, where ‘nothing is serious anyway.’”

Until recently, few comedians in India have been willing to do that. But when Mr. Sarkar looked overseas, he saw comic legends like Kevin Hart, Jordan Peele, Bernie Mac, and Eddie Murphy criticizing racism.

In America, Black comedians “talk about how their people faced generational oppression. That intrigued me,” says Mr. Sarkar, who’s been performing stand-up for five years now. “I realized comedy is an art form where you can talk about things which are taboo.”

Mr. Sarkar’s jokes are rooted in his lived experiences as a Dalit growing up in a tribal Naxalite area in eastern India. During the show, Mr. Sarkar talks about how untouchability was normalized in his home village. He recalls how in his childhood he was yelled at by an upper-caste woman for drinking from a public hand pump. The woman later washed the hand pump with Gangajal – the sacred water of the Ganges – to purify it.

“Then I touched the Gangajal itself, and she had to purify the Gangajal with Gangajal,” Mr. Sarkar tells the audience, eliciting another burst of laughter.

People come up to Mr. Sarkar after most shows and ask him to “tone down the anti-caste jokes,” but not at this one.

After Mr. Sarkar leaves the stage, audience member Pranjal Das comments that he and his sibling didn’t know Mr. Sarkar was a Dalit going into the show, but they enjoyed his set nonetheless. “I was shocked to hear a few things he said,” Mr. Das adds.

That’s one of Mr. Sarkar’s favorite parts of this job – shocking the audience members out of their comfort zone, forcing them to think about caste from a new perspective.

“In most cities, the audiences are privileged and upper caste. … When they laugh at my jokes, they are in a dilemma whether they should laugh or feel guilty,” Mr. Sarkar says.

Not every Dalit comic leans into their caste identity. For some, the first instinct is to veer away from that topic. 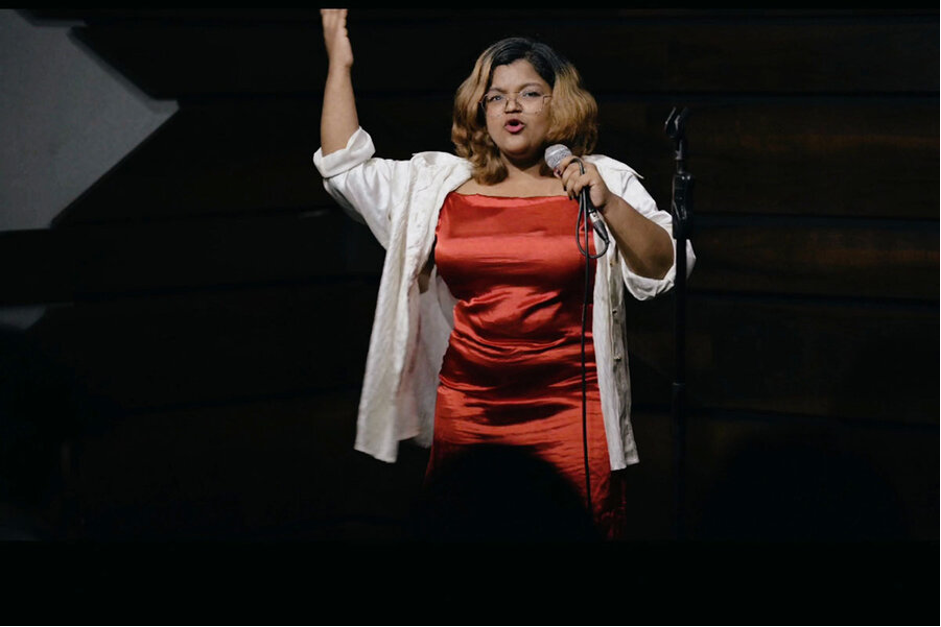 She used to stick to subjects that were familiar to upper-caste audiences. “I thought connecting to the audience was important, and being a Dalit and having such content would not be relatable,” she says.

But recently, her perspective shifted. She realized she could make a better mark for herself and create more useful comedy, if she let her audience get to know her. Ms. Tangade gradually started talking about being queer and a Dalit in her shows, and now she frequently pulls from her life experiences, like when a former partner had “backed out” once he learned she was a Dalit. “His parents were OK with anyone but a Muslim or Dalit girl,” she says with a chuckle.

The growing number of Dalit comics gives Ms. Shivaprasad, the researcher, hope for India’s comedy scene. Dalit comics have gone viral online for poking fun at caste-related issues, and some comedy shows now market all-Dalit lineups. “There are people and groups that do anti-caste and feminist comedy,” she says, “which is different than the way mainstream comedians perform.”

Ms. Tangade recalls an instance when a production house she had worked for chose to sign an upper-caste performer despite having a dozen Dalit artists to pick from. Only later did she learn that all the people in positions of power at that company were upper caste themselves.

“People want to help their own,” she says. “Dalits don’t have anyone to pull them up. As a Dalit, you have to carve your way up.”

·       Quotas bring wave of Nepalese women into office. What they need next.