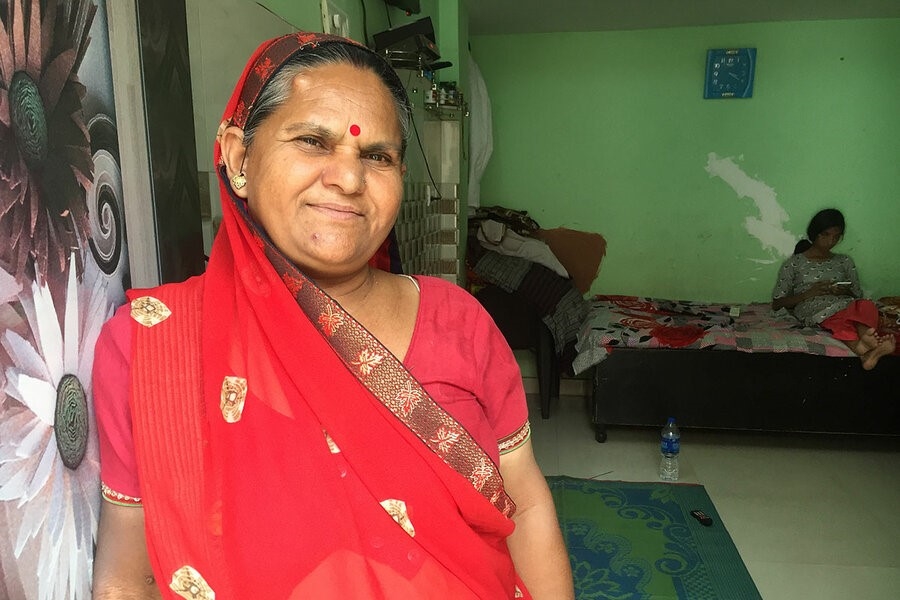 Rambharosi stands at the entrance of her home in the Bakkarwala area of New Delhi, June 8, 2022. In this neighborhood, technology is allowing many female construction workers- a particularly vulnerable group in India- to track and report air pollution. Vandana K.September 28, 2022

“Is this a new kind of mobile phone?” a neighborhood woman asked Mumtaz Begam when she showed her a small black box during a meeting of women in the Delhi slum of Sawda Ghevra. “A TV?”

But the device wasn’t for entertainment – it was a hand-held air-quality index monitor, and Ms. Begam is among 75 local women trained to measure AQI levels by a grassroots nonprofit that works on building climate resilience by making technology accessible to urban poor women.

Many women in Sawda Ghevra work in the construction industry, where they are exposed to dust, sand, and cement, making them especially vulnerable to pollution. “AQI ambassadors” such as Ms. Begam teach workers to measure air pollution in their environment, take precautions at work and home, and use the government’s pollution-curbing Green Delhi app.

Participants say the initiative – by the Mahila Housing Trust (MHT) – has served to bolster their sense of dignity. Even Ms. Begam, who runs a small stationery shop, says that despite hearing about pollution in the media, she didn’t really believe that Delhi’s air was so bad until she read the AQI monitor for herself. Many female construction workers have since made life-improving changes.

“Women [in construction] tell me, ‘Now, we are far more confident. We tell the contractor that we will work only if the conditions are proper,’” reports Ms. Begam.

But there are still limits to what these women can achieve alone, experts say.

“Providing the most impacted communities with data tools to be able to tell their own story, advocate for their well-being, and to quantify the risk that they are exposed to is definitely an important first step,” says Ulka Kelkar, director of the World Resources Institute India’s climate program, adding, “Beyond that, there has to be enforcement of policies and building of capacity to monitor and ensure compliance.”

Taking control in the workplace

The construction industry is the second-largest employer in India. It is also largely unregulated, with workers often migrating from rural to urban areas for jobs. Women are especially vulnerable.

Married off at the age of 15 by her family, Rambharosi (who, like many in poor communities, goes by only one name) migrated with her in-laws to Delhi from the northwestern state of Rajasthan. Every night, her one-room home in the Bakkarwala area is filled with a putrid smell and smoke that rises from a disputed piece of land nearby where people burn medical, construction, and household waste.

“The female wages in the construction sector are substantially lower than their male counterparts’,” says Arup Mitra, professor of economics at the Institute of Economic Growth in Delhi, due to a bias against female productivity and women’s low bargaining power.

With no safety training or protective equipment, women breathe in debris linked by medical experts to various diseases, including tuberculosis and cancer, as well as to skin and breathing conditions. 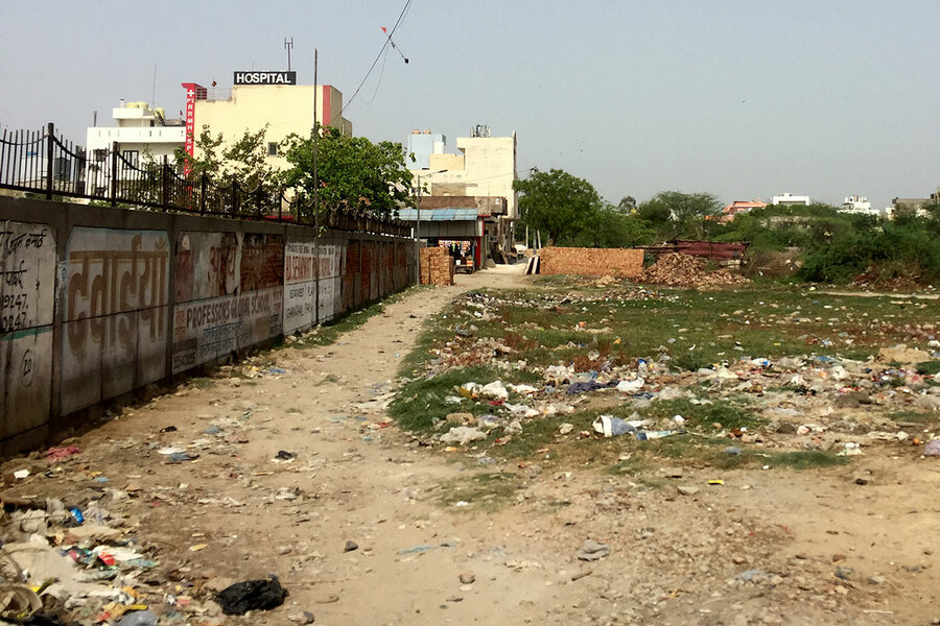 Vandana K.Waste is regularly dumped in an empty plot of land near Rambharosi and Laxmi's home in New Delhi, pictured on June 8, 2022. The fact that an influential local hospital, shown on the left, burns its medical waste here at night makes the women hesitant to complain.“Women suffer doubly in this work ... because there is no compliance with safety standards,” says Thaneshwar Dayal Adigaur, secretary of a construction workers union in Delhi.

Rambharosi, who started wearing a mask, scarf, and gloves to work for the first time last year after attending a community meeting, has borrowed the AQI monitor to show other women how polluted the air was at their work site.

“The round thing was red because the pollution was high at that time,” she says. “I told them it’s an alarm bell showing danger from smoke and dust.”

She now speaks to the contractors at each site and ensures that the sand, gravel, and bricks are sprayed with water twice a day, in addition to covering unused materials with tarps. She makes it a point to tell other women to dress their children in full-sleeved clothing and ensure they don’t play in the sand.

In addition to training AQI ambassadors, MHT and its community action groups also drove around an electric rickshaw with posters, distributed handouts, performed street plays, made wall art, and met legislators to push for safer work sites. They managed to reach 100,000 construction workers. The group’s end-line survey found that 82% began to wear masks at work, and 13% took steps to prevent pollution at their work sites.

During the project, the Delhi government took notice of their efforts and decided to work with MHT to promote its relatively new pollution-fighting app.

Launched in 2020, the Green Delhi app enables citizens to report various environmental offenses across the city, including waste burning and road dust accumulation. GDi Partners, a social impact consultancy organization, has been working with the government since 2021 to make the app more effective, and trained the AQI ambassadors on using the app to report violations.

Rambharosi’s daughter, Laxmi, received training and has since helped 300 women download the app. She’s made 14 complaints herself, most of which were resolved.

One complaint that hasn’t been addressed is the medical waste burning outside Rambharosi and Laxmi’s residence. Laxmi lodged the complaint on the app, but the women are nervous about pushing the issue since there’s a powerful hospital involved.

It’s a fear shared by many users, whose names and locations are recorded by the app, leading to data security concerns. Some worry about retribution or harassment.

“This hasn’t happened yet, but we are scared that this may happen,” says Rambharosi.

Other women who used the Green Delhi app say they received pushback from city employees. “I helped many people file complaints about waste not being picked up,” says Saroj, a fellow AQI ambassador from Bakkarwala. “The municipal worker came to me and said, ‘Don’t complain about us again.’”

Despite these hurdles, the Green Delhi app aims to get 5 million people using the app over the next three years. MHT also plans to expand its program to other informal settlements.

As for Rambharosi, she says even small measures like covering up at work have made a difference. Once battling frequent rashes and ulcers, Rambharosi no longer needs medicines for her skin. “My hands remain clean, the cement doesn’t rub on my skin, and it feels better,” she says.

She reminisces about the earthy scent of the village she grew up in, and hopes to return to someday when she retires. “I still want clean air,” she says.

·       DIFFERENCE MAKER India has a big trash problem. TrashBot is trying to help.