Caught on film, a precious ‘Three Minutes’ in 1938 Jewish Poland 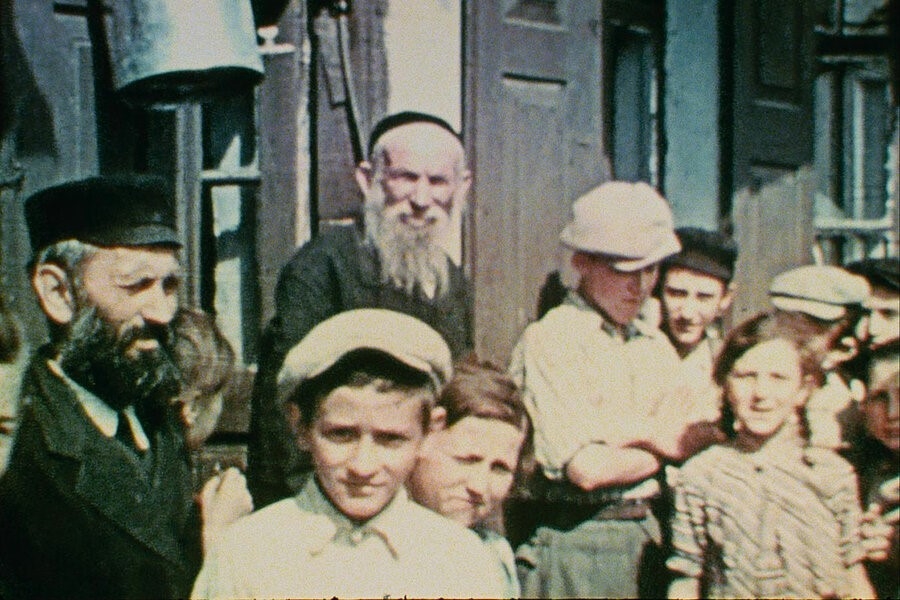 Townspeople from the predominantly Jewish village of Nasielsk, Poland, in 1938, are featured in the documentary "Three Minutes: A Lengthening."Courtesy of Family Affair Films/US Holocaust Memorial MuseumSeptember 20, 2022

Thirteen years ago, writer Glenn Kurtz discovered in Palm Beach, Florida, a roll of previously unseen 16 mm footage shot by his deceased grandfather, David Kurtz. The reel turned out to contain three minutes of rare color film of a predominantly Jewish town, Nasielsk, Poland, about 30 miles north of Warsaw. David, who had immigrated years earlier to America, had taken a tour of European capitals in 1938 and, with his newly bought camera, took a side trip to his boyhood village.

The great documentary “Three Minutes: A Lengthening,” directed by Bianca Stigter, opens with those three full minutes. We see the milling townspeople, young and old, some happily waving at the camera, some emerging from synagogue or a market. The effect is extraordinarily moving in part because we know how this will end. As we soon learn, on Dec. 3, 1939, about three months after Germany invaded Poland, the 3,000 or so Jewish inhabitants were rounded up in the town square, summarily beaten, and eventually shipped to the Treblinka death camp. Of that 3,000, fewer than 150 were alive in 1945.

The people in this brief clip, many of them children – the boys horsing around, the girls more decorous in their patterned dresses – are like phantoms reaching out to us across the vales of time. Many in the community had never before seen a movie camera, and, as one Nasielsk survivor tells us in a voice-over, it was regarded as a kind of magic box. Normally the village had its hierarchal divisions, but for the camera, all but the very Orthodox happily assembled and jostled together.

How that Nasielsk survivor was located is indicative of the forensic diligence that informs the narrative, which began as a book by Glenn about his discoveries. Even the faded lettering above a grocery store becomes a talismanic clue of sorts. Glenn initially donated the film to the U.S. Holocaust Memorial Museum in Washington, where it was restored. (The color red, the last to fade, shows up brightest in the clip). Two years later, a woman contacted him to say that a young boy in the footage was almost certainly her still-alive grandfather, Maurice Chandler, who had survived and immigrated to America. “I recognized myself immediately in that smile,” says Maurice, who was born Moszek Tuchendler, of his 13-year-old self.

Maurice’s memories help decode some of the details of that day. He describes how some of the boys wore caps to show off their independence from those who wore yarmulkes. In quick, resonant sketches, he identifies several of the children and adults. Throughout, Stigter keeps playing and replaying portions of the footage, in slow motion or freeze frame. As the film’s narrator, Helena Bonham Carter, says, “They say one picture is worth a thousand words. But before that phrase makes sense, you need to know what you’re looking at.” The result is a metaphysical detective story in which the stakes – the preservation of the memory of a people – could not be higher.

The film medium has often been discussed in academic terms as a vehicle to contain the passage of time. But “Three Minutes” does much more than that. Although it raises all sorts of issues about the nature of the film image and how it can affect us, it is also the least theoretical of movies. We are bearing witness. These people looking back at us seem both shudderingly close and ineffably far away. Whatever their ages, they are rendered forever young. Their ultimate fate imbues the imagery with an overwhelming poignancy that is almost impossible to comprehend.

Bonham Carter speaks over a present-day shot of the town square – where the Jews were rounded up, and where no memorial lies – and says, “The only thing left is an absence.” I don’t agree. In that absence there will forever be a wail, a prayer. It fills the empty air with its immanence.

Peter Rainer is the Monitor’s film critic. “Three Minutes: A Lengthening” is briefly in theaters and is available on many streaming platforms starting Sept. 20, and will be available on Hulu in December. The film is rated PG for thematic material involving the Holocaust.