by Dave from Crossroads School in Santa Monica.

"With TV, the viewer is the screen".

When the Farnsworth family moved to their new farm in 1919, eleven-year-old Philo was surprised to find it wired for electricity. It was this unusual circumstance which contributed to his fate: to become one of the more important inventors of the twentieth century.

By the time he was thirteen, Farnsworth had become a self-taught electrical engineer. He was able to fix the farm's generator when none of the adults could and to build motors in his backyard out of spare parts. It was inevitable that when he read an article about a new idea--for the transmission of electronic pictures--that he would want to attempt it himself.

In those days, a Scottish scientist named John Logie Baird had been working with the cathode ray tube. By 1926 Baird's machine would produce the discernible image of a face. But in 1922 when Farnsworth read the article, British scientists could make only blurs of light.

Farnsworth studied everything he could find on the subject. He daydreamed about it even as he went about performing his chores around the farm, until one day in 1922, he drew a diagram on a chalkboard for his high school science teacher, Justin Tolman, and announced that this was his idea for television. Despite the fact that many older engineers with significant financial backing were already developing television, Farnsworth made a bold decision: he was going to perfect a working model of it before anybody else.

In college, Farnsworth continued his research with cathode ray and vacuum tubes, but the death of his father eventually forced him to give up this research and find a job in order to support his family. But even then he found his fortune. His first job was for George Everson, a professional money-raiser whom Farnsworth was lucky to meet. Farnsworth discussed his dream of television with his boss. While acknowledging the accomplishments of those who came before, he thought that he could get closer. Everson liked to gamble, so he agreed to risk $6,000 on the research.

Farnsworth settled in California to begin work. Everson continued to back him, but in order to get others to contribute, he decided to bring a professor from CalTech into the lab to bestow his blessing on the project. Dr. Mott Smith marveled at what he called "the daring of this boy's mind."

Backers came in 1927 to see the first American television (one year after Baird's). They were astonished to see the image of a single white line resolve itself on the screen before them, and agreed that this new invention was worth putting money into.

Meanwhile, the Radio Corporation of America's president, David Sarnoff, became curious about Farnsworth's progress, and sent someone to find out how far along he was. Vladimir Zworykin was an engineer who had also been working on television, but he had been doing so along the same lines as the British scientists, whose progress was slower than Farnsworth's, despite their superior funding.

Zworykin went to Farnsworth's lab in the guise of an interested colleague. Farnsworth, always generous with his knowledge and expertise, showed Zworykin the operation. After three days of hanging around the lab, Zworykin had discovered the secret: a so-called "image dissector," which allowed for better resolution of images. Soon after, Zworykin went to work for RCA, developing an "iconoscope" strikingly similar in function to the image dissector. Even then, Sarnoff offered Everson $100,000 for Farnsworth's television and Farnsworth's own services. Everson, in accordance with his friend's determined independence, refused.

In 1934, when RCA had its own workable model of television, the patent battle began. Both parties tried to prove that they had come up with the important ideas first. But Farnsworth had an ace in the hole. His old science teacher, Justin Tolman, recreated the sketch that his student had drawn in chalk back in 1922, proving that Farnsworth had come up with the idea before RCA. Farnsworth won the patent. Ironically, the first licensing offer came from a British company. His technology had superseded that of Baird, the Scottish inventor whose work initially inspired Farnsworth.

The story of Philo T. Farnsworth reveals an important truth about the process of scientific innovation. The person who is remembered and credited as an inventor is not always the one who comes up with the original idea. Often it is the person who improves on somebody else's idea. Many scientists from around the world were working on television technology. At least one could have and would have perfected it eventually. Farnsworth, however, stands out because of his courage--he refused to sell out to a giant corporation, and never gave up hope until he made something of those sketchy images from his childhood. 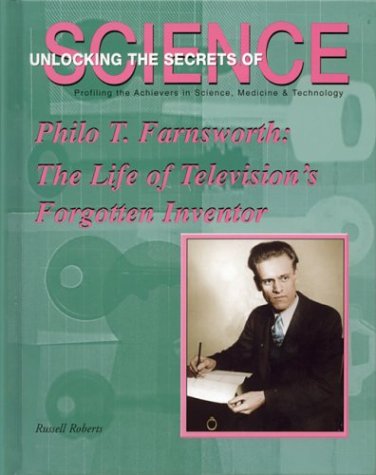 The Last Lone Inventor: A Tale of Genius, Deceit, and the Birth of Television
Evan I. Schwartz 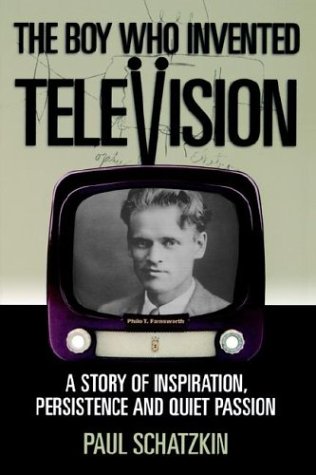 My favorite thing to do is watch TV. If there was no TV, I don't know what I'd do. That's why my hero is Philo T. Farnsworth, the inventor of the television.

Farnsworth was just a farm boy who knew absolutely nothing about electronics. When he was fourteen, he drew his idea for a television on a blackboard in his high school.

I thank Philo T. Farnsworth because he was so smart and if it wasn't for him there would be no Simpsons or even your computer that you are reading this on.