by Ethan Garcia from San Diego, California in United States 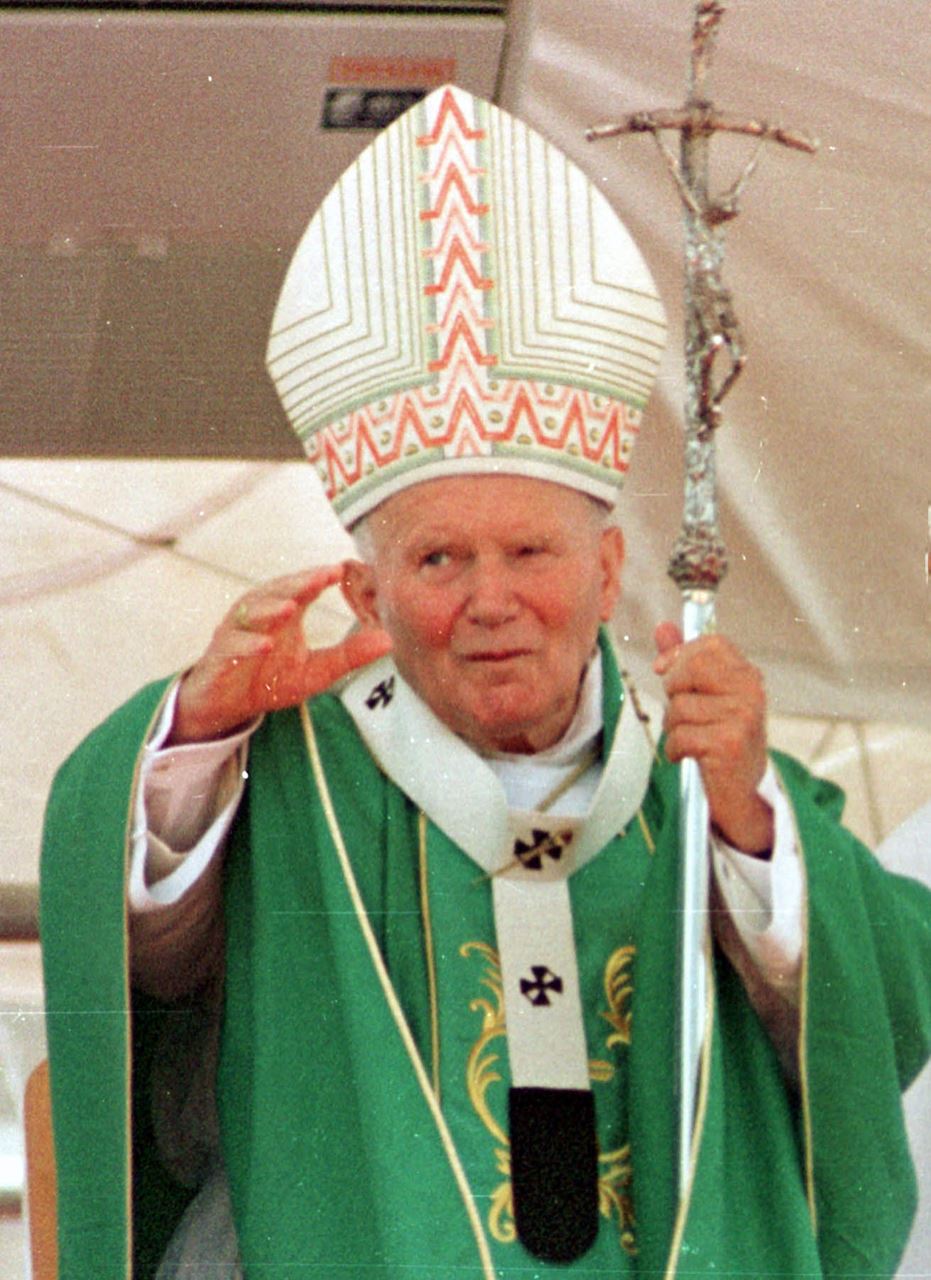 Pope John Paul IIJosé Cruz/Abr [CC BY 3.0 br (https://creativecommons.org/licenses/by/3.0/br/deed.en)]The head of The Roman Catholic Apostolic Church and the first non-Italian Pope in 455 years, Pope John Paul II survived World War II and an assassination attempt. He traveled around the world advocating for those who were less fortunate and after his passing he was named a saint. Pope John Paul II was born Karol Józef Wojtyla on May 18, 1920, in Wadowice, Poland. He became the first non Italian-pope in 400 years on October 16, 1978. During his papacy he visited 100s of countries, spreading faith and peace. On May 13, 1981, Pope John Paul II was shot during an assassination attempt. He later visited his shooter and forgave him, person to person. He passed away in the Vatican on April 2, 2005 and was beatified May 1, 2011. He became St. John Paul II after his canonization on April 27, 2014. Pope John Paul II was an influential person, as he was the leader of a faith of over 1.2 billion. He was an advocate for human rights and he spoke out about the suffering in the world. His determination enabled him to rise through the church hierarchy and become Pope. Because Pope John Paul II was influential, being the leader of Catholicism, and because he was determined, as he was an advocate for human rights, he was and still is a hero for many.

Pope John Paul II was an influential person, being able to change how the church viewed and interacted with the world and vice versa. His position as the leader of a faith of over a billion individuals enabled Pope John Paul II to be an influence to many. "As the leader of the Catholic Church, he traveled the world, visiting more than 100 countries to spread his message of faith and peace" (“John Paul II.” Biography.com, A&E Networks Television, 17 Apr. 2019). He was an influence to many in the third world, having visited Africa more times than any other continent. His constant travel was new to the church, and it helped the church interact differently with the world for the first time in history. The world was able to view the church in a different light. He traveled to 129 countries, spreading peace, and played a role in ending communism. Pope John Paul II was an influence on world events including the Cold War. "He changed the course of history and helped bring an end to the Cold War through his support of [the Polish trade union] Solidarity and the Polish freedom movement" ("Roundtable: What Pope John Paul II meant to Africans and African-Americans." News & Notes, 4 Apr. 2005. Student Resources In Context, Accessed 1 May 2019). This started the landslide that wiped out Communism in Eastern Europe and eventually the Soviet Union. Pope John Paul II recognized the value of travel and media and how they played a role in spreading a message of goodwill. And he brought it all about as a nonviolent revolution without shedding blood, proving foolish the conservative hawks who had counseled violent confrontation and first strikes that would have cost the lives of millions. Pope John Paul II influenced important world events and the views of millions. He helped end the Cold War, he brought a new age to the church, and by doing so, he spread faith and teachings of peace to over 100 countries.

Pope John Paul II's determination enabled him to become the pope. He was determined to travel the world spreading faith and supported his beliefs no matter what. He continued to study even during the grasp of World War II and continued to work even after the passing of his family. "John Paul spent two years in Rome where he finished his doctorate in theology. He returned to his native Poland in 1948 and served in several parishes in and around Krakow. John Paul became the bishop of Ombi in 1958 and then the archbishop of Krakow six years later" (“John Paul II.” Biography.com). In the months that followed, Jews as well as non-Jewish cultural and political leaders, including professors and priests, were killed or deported to concentration camps by the Nazis, who considered the Slavs an inferior race. Pope John Paul's determination allowed him to rise through the church's hierarchy in a short amount of time. A vocal advocate for human rights, John Paul often spoke out about suffering in the world. He held strong positions on many topics, including his opposition to capital punishment. The Pope was able to travel around the world and continued to interact with the faithful even when his health began to decline. 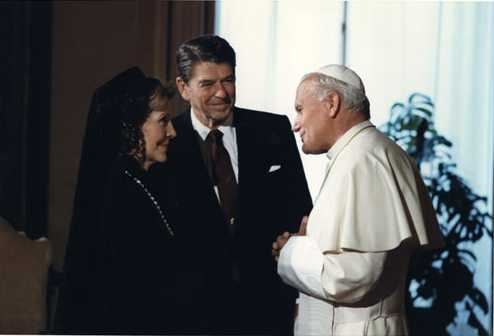 Pope John Paul II and Mrs. ReaganJosé Cruz/Abr [CC BY 3.0 br (https://creativecommons.org/licenses/by/3.0/br/deed.en)]"After graduating from secondary school as valedictorian, Wojtyła moved with his father to Kraków, where he attended the Jagiellonian University. His studies ended abruptly when Nazi Germany invaded Poland on September 1, 1939. In his later years, John Paul's health appeared to be failing. At public appearances, he moved slowly and seemed unsteady on his feet" ("Pope John Paul II: The Biography." Publishers Weekly, 10 Apr. 1995, p. 50. Student Resources In Context, Accessed 1 May 2019). Even during WW2 he continued to study and work, even with the fear of death. Even though his health continued to decline, he still attended public showings, which shows his determination to faith.

Pope John Paul II was a determined and influential individual who affected the lives of many. As the head of a faith of over 1.2 billion followers, he had a large impact on their beliefs. He taught forgiveness and had the courage to forgive the man that shot him. He was faithful to the church even as his health began to decline. Through his acknowledgement of the importance of modern amenities like travel and media, he was able to influence how the world viewed the church and how the world interacted with the church. Pope John Paul II was an inspiration because of his commitment to his faith and the well being of those who were less fortunate. He was strong in his beliefs and was known to stick to what he believed. He was an important figure to billions of people and was faithful to the church up until the end. After St. John Paul II passed on April 2, 2005, the crowd at his funeral chanted "Santo Subito!" They did so for the much-beloved pope. Long before Pope Francis earned the nickname, St. John Paul II was known as "the people's pope." St. John Paul II recognized the value of modern travel and mass media in spreading the Gospel and a global message of goodwill. He also used his personal visits to reinvigorate local church communities and canonized more saints than any pope in history. During more than a quarter-century on the chair of Peter, St. John Paul II also published numerous important documents in the life of the church. His impact lasted even after death, as he was canonized and made a saint because of his impact on the world during his papacy.