by My Hero Staff

"We all are heroes if we can work for peace and love in the world."
-- Leonara Shiroka, President, PostPessimists

Diell Bakalli of Prishtina, Kosova, joined the PostPessimists in 1997 when he was 13 years old. Bakalli explains his reasons for working with the group:

"The main thing was always 'to change something.' I was always interested to make something New. Also, the whole situation, the whole war atmosphere pressed me to get inside the organization.

"Because the country is in the middle of the transition, I am trying to take a big part in that process. I am helping the Ministry of Education for the school reforms, taking part in different seminars and conferences. Also at the same time, my friends and I are working on social and youth problems, organizing different campaigns, workshops and a lot of other activities.

In four and a half years, I have seen the whole situation here change. Everything is changing. Now the new government is being formed; also there are new school reforms and economic reforms. But also there is the bad part, where the whole environment is very dirty, as people now don't really care about it. But only a lot of effort can bring good things in life such as Peace!"

Adla Dizdar, age 18, is from Mostar, Bosnia and Herzegovina. She has been with the PostPessimists for 5 years, since 1997. She says:

"Mostar,the city where I live, is separated into two parts. There was no contact between youth from both sides, except when they were fighting. I attended the PostPessimists meeting in Hungary, and it was really nice to spend ten days with people from west Mostar, ten days of laughing, talking about our interests, being in the workshops. And we made friends with youth from all over the Balkans. I was so proud. We came back to Mostar and kept in touch. We were the first ones who made a project for youth from both sides.

"There is still the problem of separation (not to mention other things). I participated in establishing the Council of Students, and our first goal is to influence the municipality so that they will finally unite the school system on the city level. I think it is going to be a big step forward, and the people will finally realize that we CAN and also WILL live together. We are young and our time is about to come.

"Everything in this community is changing. Slowly, but it is. People are trying to live normally, as if the war didn't happen. The process of unification has started, but it still needs some time. It is important to think positive and to be tolerant of each other. We all must try to catch the stars, and if the stars are too high, we try to jump higher!"

Lenora Shiroka joined the PostPessimists when she was 14 years old and became president two years later. One of the projects she has been involved with through the PostPessimist group is Children to Children, in cooperation with Children's Aid. It is a project in which Leonora and other members of the group go to high schools and talk to young people about alcohol abuse, drug abuse, and family problems. Leonora organized the Golden Hands project, which gathered 25 children from the war-torn zone of Dernitza to participate in reading, writing, and storytelling workshops. Together this group of five- to twelve-year-olds produced theater performances, artwork on paper, computer workshops and concerts. It has been highly successful and offers these people a respite from the ravages of war that still surround them.

The following is a speech that Shiroka delivered upon accepting the Wright Dunbar Prize on behalf of the PostPessimists in the fall of 1999:

"I am going to say some words from my heart and what I am feeling in this moment. I am very happy to be here between you in this place and between the other young people from America and it is really a great pleasure to represent my group, the PostPessimists of Prishtina, which has done really good work.

"When we began the work in 1995, we didn't feel that we were going to have such a success because the adults thought that it was a strange idea and we cannot do things because we are children. So in some way they destroyed us, but we wanted to show them that we can do many other things without them and maybe better than them in arts and other things that can get together the young people of all the world.

"I have to thank the other persons for this prize because we are not the only PostPessimists in former Yugoslavia. There are PostPessimists in Bosnia, Herzokovina, in Croatia, in Slovenia, in Serbia, and in Macedonia. We are in contact with them and it is a little bit their prize too. I have to thank very much the angels of the world, the international angels who helped us realize most of our projects because we needed money for the projects and we needed financial support. So we got the support from Sonos Society, and Sage (Netherlands), from Save the Children, Unicef, Unesco, and other organizations.

"And I have to thank you for this, for today for us to be here because this is a very special day for me and especially for young people from Kosovo because I passed through a war. I saw everything. I know how I felt during all the time, and it was a really bad story. But we have a force and we have an energy to continue with our work. So this prize, this award will be one more reason to continue our work. Thank you."

Lenora Shiroka is a remarkable young woman. She has grown up in a very complex and violent time for her home and yet she embodies a spirit of hope that cannot be diminished by the hatred of adults who will not listen to the wisdom of the children. Children can teach all of us many important lessons. The PostPessimists are leading the way towards a better future for Prishtina and the rest of the world by their example. "I don't have yet a hero," she says, "but I think that we all are heroes if we can work for peace and love in the world."

The PostPessimist youths have been subjected to persecution both as ethnic Albanians in Kosovo/a and as PostPessimists acting on their ideals. Those Albanians who opt for military means to obtain their sovereignty have also vilified the PostPessimists. In spite of this they say: "We are not as pessimistic as we used to be, but we are not yet optimists. We are PostPessimists." Overcoming nationalistic hatred so common in the Balkans will require a new, well-educated generation to continue the efforts of the PostPessimists toward peace, cooperation and democracy.

We wish to offer some PostPessimists the opportunity to continue their interrupted education. The selected youths will be placed with suitable host families for a year or two, until graduation, and will attend schools in the San Francisco Bay Area, as well as receive a stipend to cover ordinary expenses.

Kosovo/a youth have very strong ties with their families and their country and we want to support this relationship while they are students in California. We will help them stay in touch with their homeland and family through specific projects and activities, as well as participation in the Kosova Youth Network.

In the summer we hope that these students will return to Kosovo/a for family reunions and to take part in summer projects to be arranged by the PostPessimists living in Prishtina.

It began during the war in 1995, with a Kosovo Albanian and a Kosovo Serb who refused to hate each other despite the ethnic hatred all around them. They gathered with Albanian and Serbian friends in a small, old house in Prishtina to talk about peace. Because they "saw no reason yet to be optimists and did not want to surrender to pessimism either," they called themselves the PostPessimists. In a country where Serbian and Albanian children were not allowed to go to the same schools, these meetings were nothing short of revolutionary. From the beginning they demonstrated that youth of different ethnicities not only can co-exist but can work together to improve the lives of children and youth in an ethnically mixed environment.

The organization was a bi-ethnic association for several years, until the Serbian war against Kosovar Albanians led to mass deportations in the Spring of 1999, forcing Serb members to leave the city. In spite of the war, ignoring persecutions and the constant risk and imminent danger, the members never gave up. Instead, they issued an appeal to all the youth of Prishtina to unite and work together for renovation of the culture and sports center in Kosovo's capital. The appeal was broadcast by both Serbian and Albanian radio stations, which on most matters oppose each other. No other peace organization had yet dared take such a step. They gathered approximately 600 children and youth for their project, which was accomplished with great success. 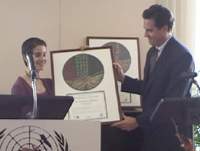 In 1999, the PostPessimists of Bosnia Herzegovina won the Wright Dunbar Prize for social activism at the Global Peace and Tolerance Awards Ceremony.