The Latest: Pulitzers special citation issued to Ida B Wells

by By The Associated Press from NEW YORK 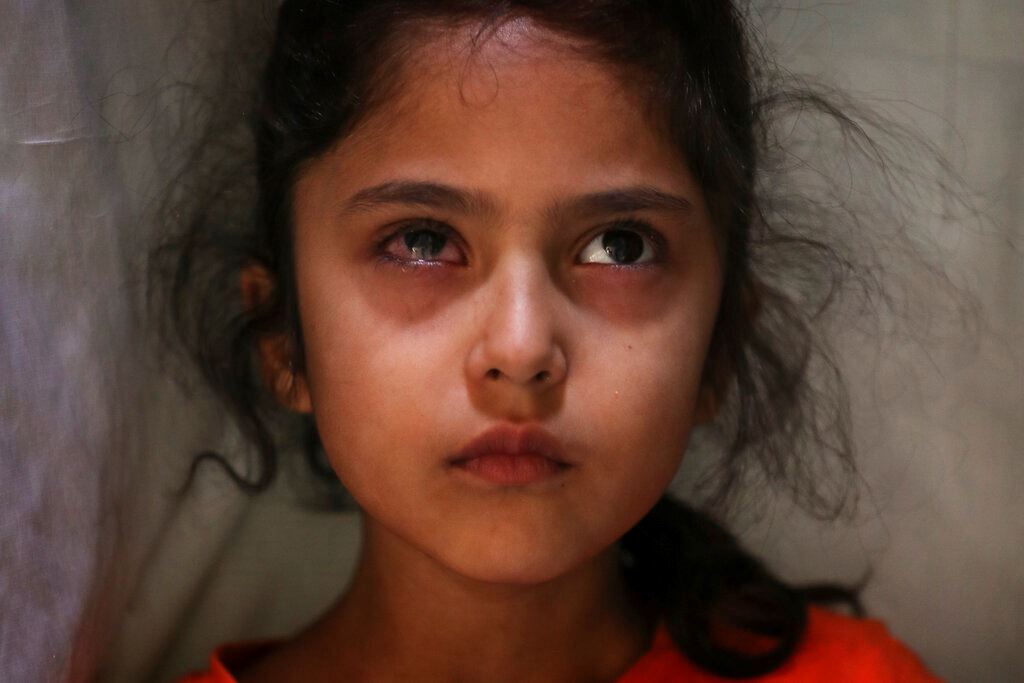 Six-year-old Muneefa Nazir, a Kashmiri girl whose right eye was hit by a marble ball shot allegedly by Indian Paramilitary soldiers on Aug. 12, stands outside her home in Srinagar, Indian controlled Kashmir, Sept. 17, 2019. The image was part of a series of photographs by Associated Press photographers which won the 2020 Pulitzer Prize for Feature Photography.AP Photo/Mukhtar Khan

4:15 p.m.
The board of the Pulitzer Prizes issued a special citation Monday to Ida B. Wells, the trail-blazing African American investigative journalist.

The Pulitzer board said the citation comes with a bequest of at least $50,000 in support of Wells' mission, with recipients to be announced.
In honoring her during the prize announcements, the board noted "her outstanding and courageous reporting on the horrific and vicious violence against African Americans during the era of lynching."

Wells, born and raised in the south, was a civil rights activist in the late 19th and early 20th centuries who campaigned against lynching, which she showed in her writing was used as oppression against African Americans. She later moved north, and continued her activism.
___
3:50 p.m.
The Pulitzer Prize for public service went to a collaboration between the Anchorage Daily News and ProPublica for coverage of policing in Alaska villages. 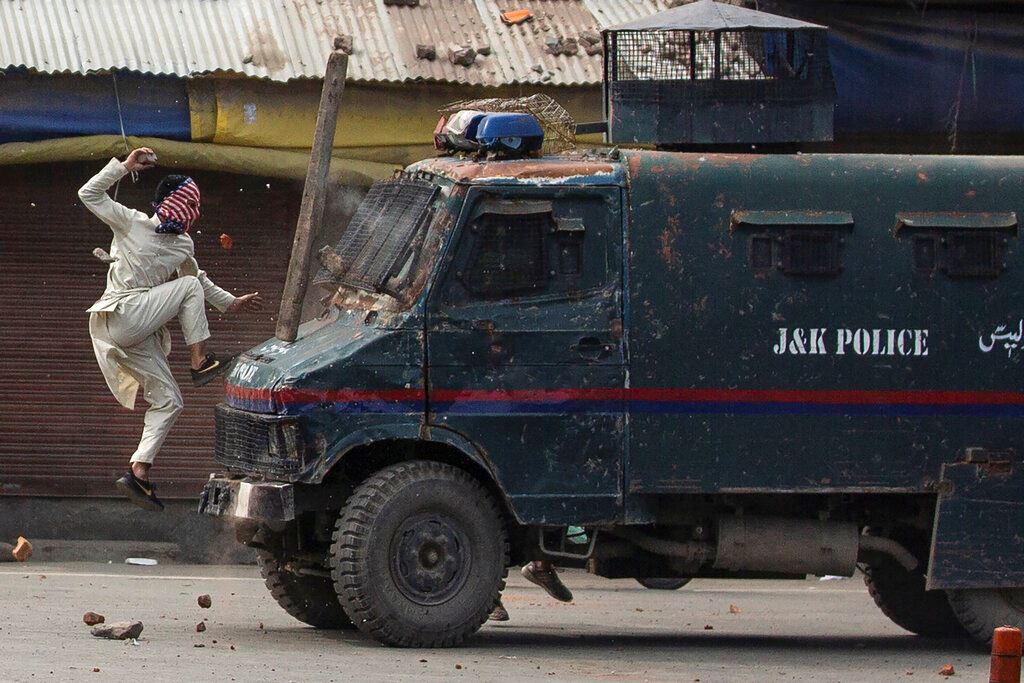 A masked Kashmiri protester jumps on the bonnet of an armored vehicle of Indian police as he throws stones at it during a protest in Srinagar, Indian controlled Kashmir, May 31, 2019. The image was part of a series of photographs by Associated Press photographers which won the 2020 Pulitzer Prize for Feature Photography.AP Photo/Dar Yasin

The stories, which Pulitzer Prize Administrator Dana Canedy described as "riveting," showed how severely public safety is lacking in Alaska, with one-third of villages having no police protection and dozens of communities hiring officers with criminal records of their own.

The coverage brought in funding and inspired legislative change.
___
3:45 p.m.
Michael R. Jackson's musical "A Strange Loop," a musical about a man trying to write a musical, has won the 2020 Pulitzer Prize for drama.
Jackson, who wrote the music, story and lyrics, centers on an overweight, overwhelmed "ball of black confusion" trying to navigate the worlds of white, black, gay as well as his family's religion.

"No one cares about a writer who is struggling to write," sings the anxiety-ridden lead character, Usher. 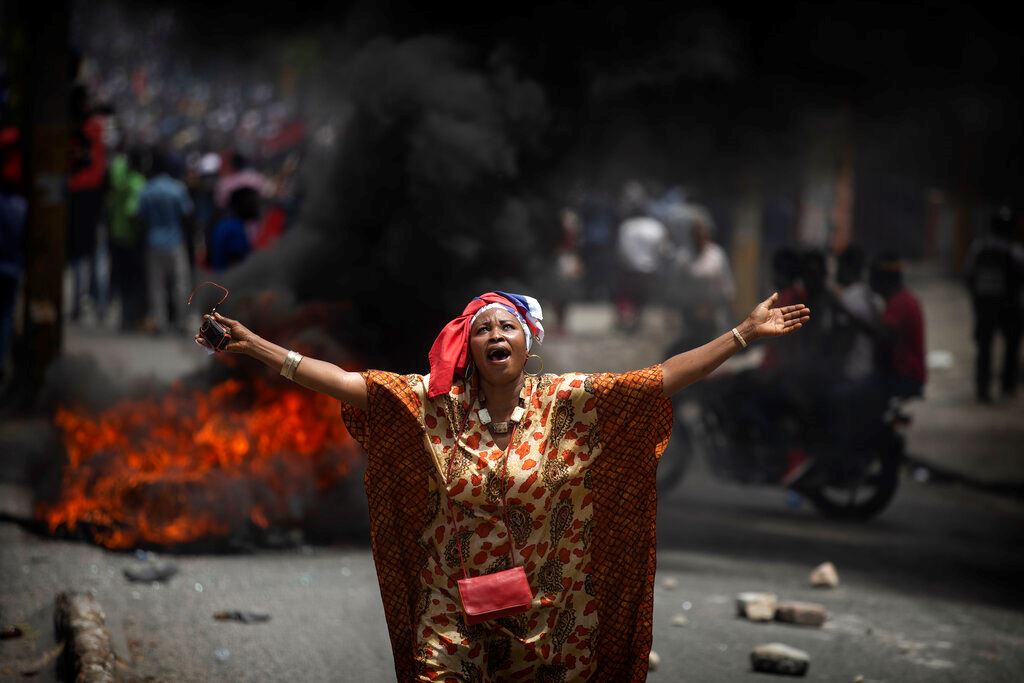 A protester yells anti-government slogans in Port-au-Prince, Haiti, June 9, 2019. Protesters denouncing corruption paralyzed much of the capital as they demanded the removal of President Jovenel Moise. The image was part of a series of photographs by Associated Press photographers which was named a finalist for the 2020 Pulitzer Prize for Breaking News Photography.AP Photo/Dieu Nalio Chery

The Pulitzer board called it a "meditation on universal human fears and insecurities." The play was seen off-Broadway in 2019 at Playwrights Horizons.

The Pulitzer drama award is "for a distinguished play by an American author, preferably original in its source and dealing with American life," according to the guidelines. Musicals rarely claim the Pulitzer, with only "Next to Normal" and "Hamilton" winning since 2010.

3:40 p.m.
The Anchorage Daily News and ProPublica won the Pulitzer Prize in public service Monday for illuminating the sparse policing of many Alaska villages.

The New York Times won the investigative reporting prize for an expose of predatory lending in the New York City taxi industry, while the staff of The Courier-Journal of Louisville, Kentucky, took the breaking news reporting award for quickly unpacking racial disparities and other issues in a spate of governor's pardons. 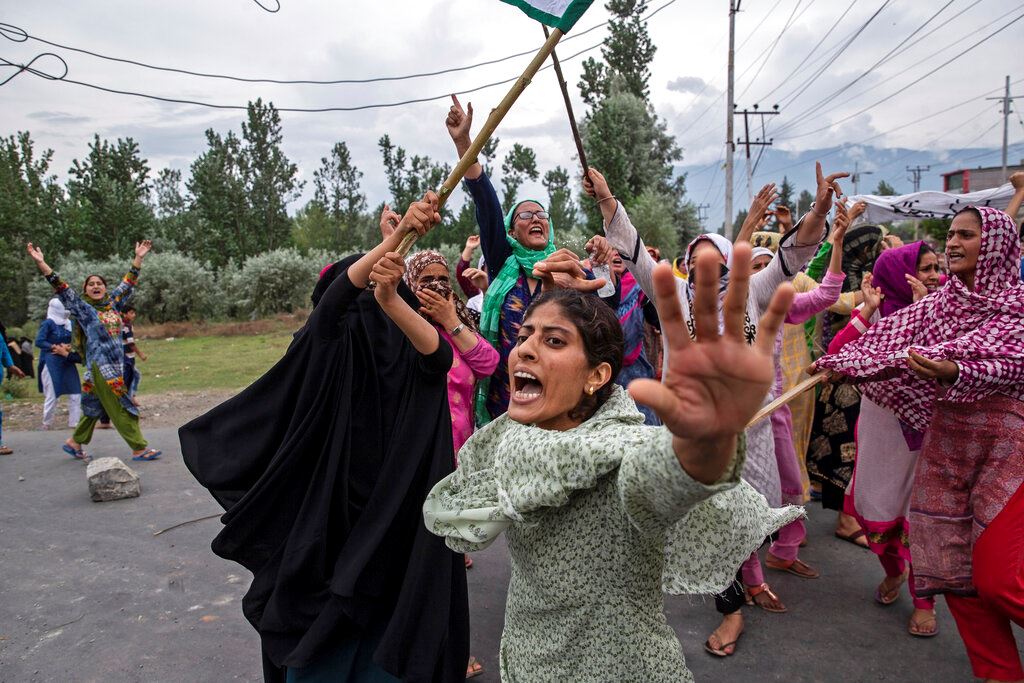 Women shout slogans as Indian policemen fire teargas and live ammunition in the air to stop a protest march in Srinagar, Indian controlled Kashmir, Aug. 9, 2019. The image was part of a series of photographs by Associated Press photographers which won the 2020 Pulitzer Prize for Feature Photography.AP Photo/Dar Yasin

A first-ever award for audio reporting went to "This American Life," the Los Angeles Times and Vice News for "The Out Crowd," an examination of the Trump administration's "remain in Mexico" immigration policy.

His novel about a brutal Florida reform school, "The Nickel Boys," received the fiction prize Monday. Whitehead's most recent previous book, "The Underground Railroad," won for fiction in 2017.

He is also known for such acclaimed works as "John Henry Days" and "The Intuitionist." 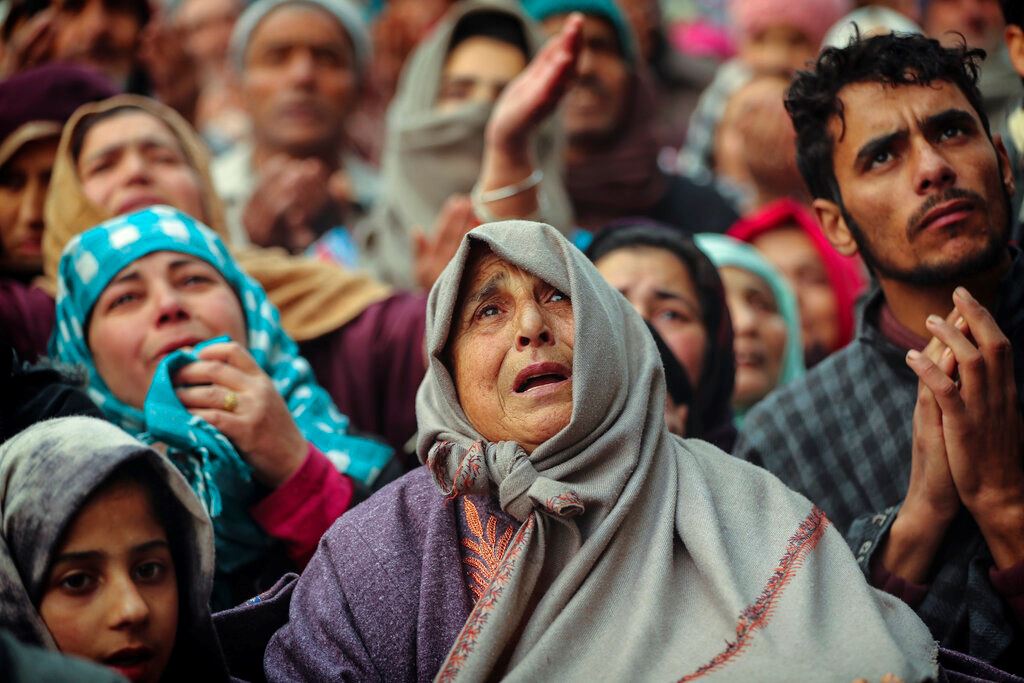 Kashmiri Muslim devotees offer prayer outside the shrine of Sufi saint Sheikh Syed Abdul Qadir Jeelani in Srinagar, Indian controlled Kashmir, Dec. 9, 2019. Hundreds of devotees gathered at the shrine for the 11-day festival that marks the death anniversary of the Sufi saint. The image was part of a series of photographs by Associated Press photographers which won the 2020 Pulitzer Prize for Feature Photography.AP Photo/Mukhtar Khan

The drama winner was Michael R. Jackson's musical "A Strange Loop." Benjamin Moser's "Sontag: Her Life and Work," about the late Susan Sontag, won for biography.

There were two winners in general nonfiction: Greg Grandon's "The End of the Myth" and Ann Boyer's' "The Undying."

In history, W. Caleb McDaniel won for "Sweet Taste of Liberty." The poetry winner was Jericho Brown's "The Tradition."

In music, the winner was Anthony Davis' opera "The Central Park Five," about the five young men wrongly imprisoned for sexual assault. __
This item has been corrected to show that the fiction prize winner's first name is Colson, not Colton. 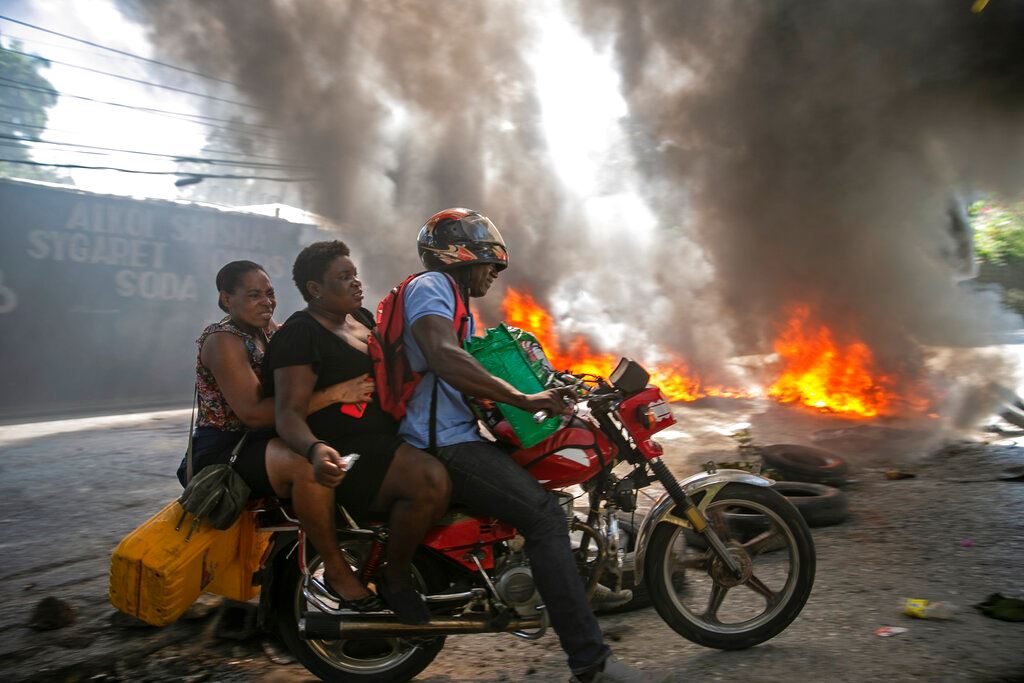 A moto-taxi driver takes two women past a burning barricade set up by people protesting fuel shortages in Petion-ville, Haiti, Sept. 15, 2019. The image was part of a series of photographs by Associated Press photographers which was named a finalist for the 2020 Pulitzer Prize for Breaking News Photography.AP Photo/Dieu Nalio Chery3:20 p.m.
The Associated Press won a Pulitzer in feature photography for images made during India's clampdown on Kashmir, where a sweeping curfew and shutdowns of phone and internet service added to the challenges of telling showing the world what was happening in the region of 7 million people.
AP Photographers Dar Yasin, Mukhtar Khan and Channi Anand snaked around roadblocks, sometimes took cover in strangers' homes and hid cameras in vegetable bags to capture images of protests, police and paramilitary action and daily life. Then they headed to an airport to persuade travelers to carry the photo files out with them and get them to AP's office in New Delhi.

"It was always cat-and-mouse," Yasin said, later adding: "These things made us more determined than ever to never be silenced."

Share your hero stories on the MY HERO Guestbook
Learn more about Ida B. Wells on MY HERO